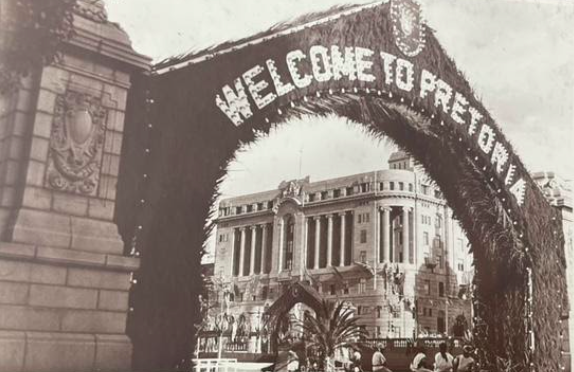 I recently came across an old photograph album of interest to Pretoria historical studies. I found it in an antique shop in Howick in November. It is printed with the name of the photographer, R S Watson.

The album contains photographs of public occasions and important persons / historical figures on the city scene from the 1920s to 1930s. I purchased the album and intend to donate it to the University of Pretoria‘s School of Architecture archive. Before handing it over I thought I would compile a quick post for The Heritage Portal in the hopes that Pretoria enthusiasts could throw some light on individual photographs as well as the photographer. It all adds to the historical record.

There are 24 photographs and it seems that the common thread is the photographer. The photos are of diverse public civic occasions from the interwar period. Three Governor Generals appear: Connaught (1920-1924), Athlone (in office 1924-1930) and Clarendon (1930 -1937). So does a Royal Prince, the Duke of Kent who visited South Africa in 1934. Pretoria was on parade, there is a military flavour to many of the photographs... artillery units, mounted infantry, old and new flags are flown, and troops are inspected.

A page of typed notes offers a summary set of captions but only 21 of the 24 photographs have been covered and the notes are very sketchy... no dates, lots of guess work and no locations.

Why should such photographs be saved? They are part of the historical record. They contribute to an archive and it is in the small details of the styles of dress, the formality of event, the sense of occasion that we capture a slice of local history. The dress of the ladies, the men’s formal attire, the uniforms on show, the grooming of the horses, the mien of the soldiers each managing his horse in strict line up and the civic robes of the mayor are all pointers to another age. The photographs are professional and are all sepia toned or in black and white. The cannon firing blanks at the Union buildings must be survivals from the First World War.

Cannon being fired outside the Union Building - RS Watson Album.png 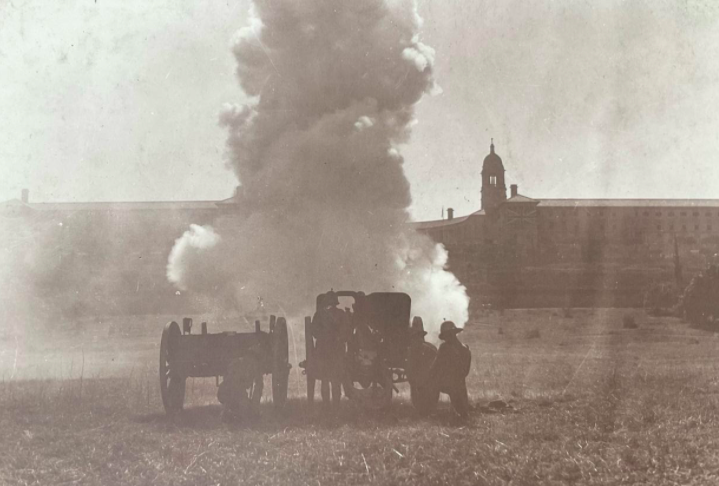 Cannon being fired outside the Union Building. Date and occasion?

Crowd gathers in the Amphitheatre of the Union Buildings - RS Watson Album.png 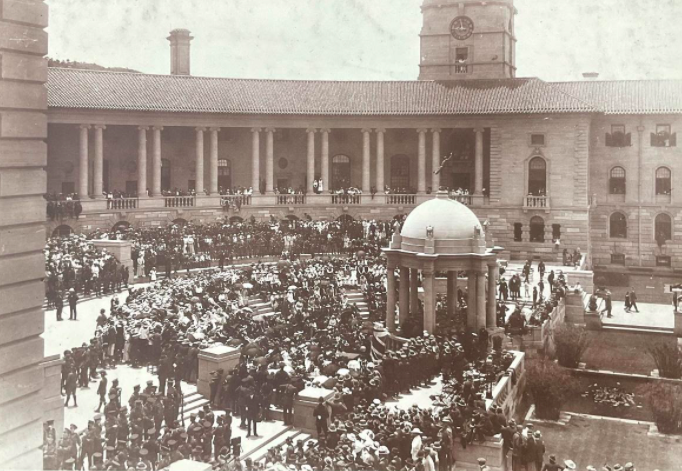 A crowd gathers in the Amphitheatre of the Union Buildings. Date and occasion? 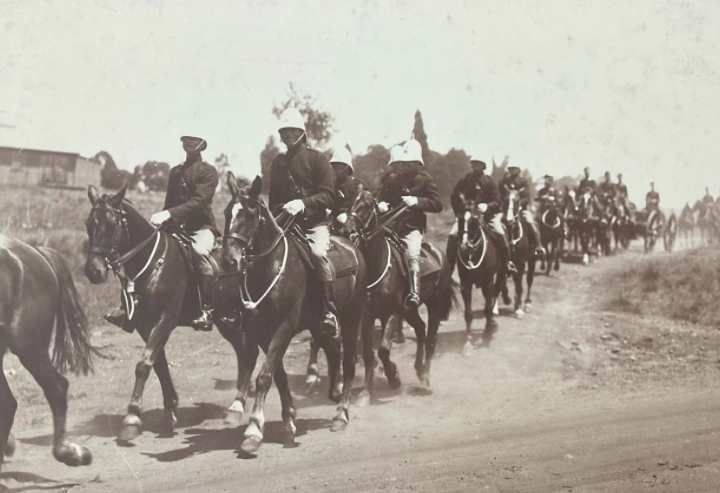 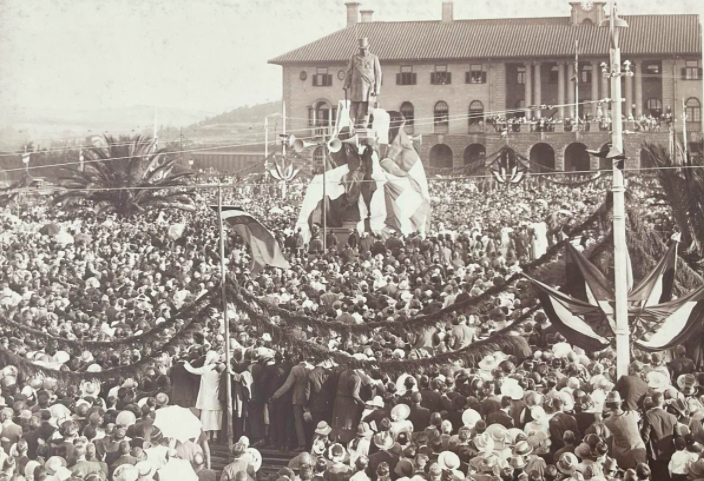 Paul Kruger statue unveiled at the Pretoria Station on 10 October 1925. Who remembers when 10th October was a public holiday... it commemorated Kruger’s birthday.

Earl of Athlone - Governor General of South Africa from 1924-1930 - in step with William Samuel Mayor of Pretoria in 1925 - RS Watson Album.png 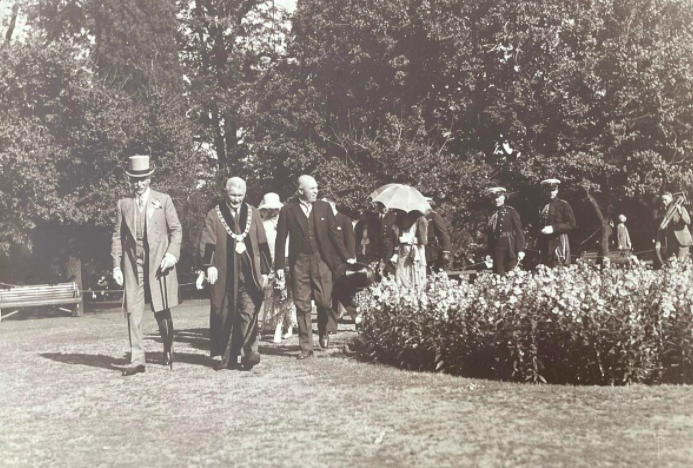 The Earl of Athlone (left) - Governor General of South Africa from 1924-1930 - in step with William Samuel - Mayor of Pretoria in 1925. It is a park setting. Place and occasion? 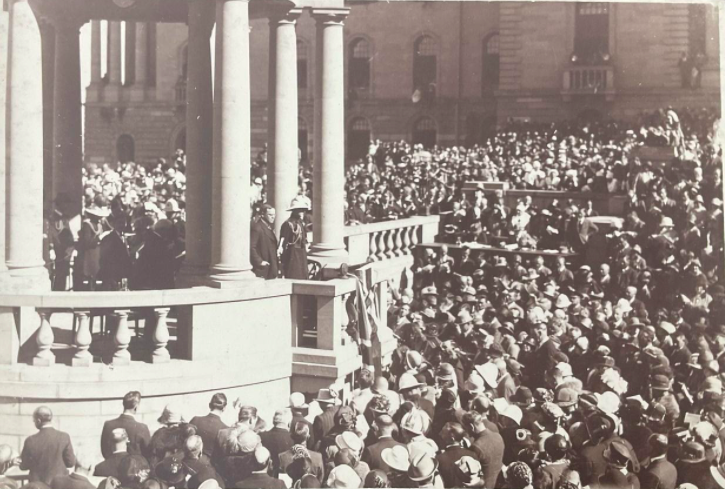 The Union Buildings. The Administrator of the Transvaal J H Hofmeyr (in office from 1924). Date and occasion? 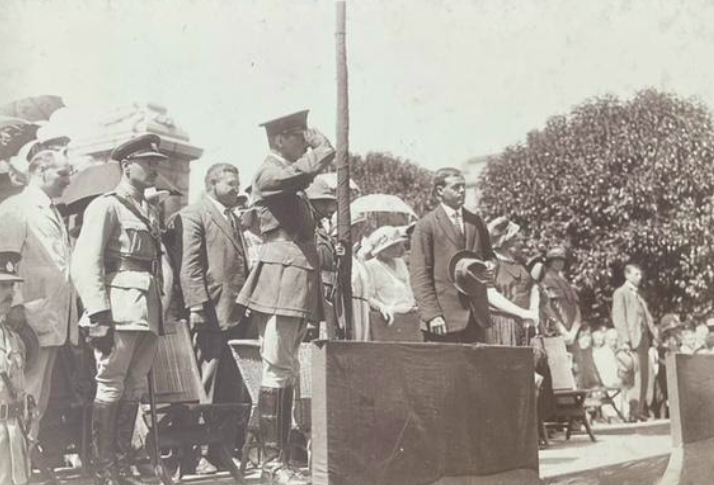 The officer saluting is General Brink. Picture possibly taken at a First World War Memorial in Pretoria. Date and occasion? 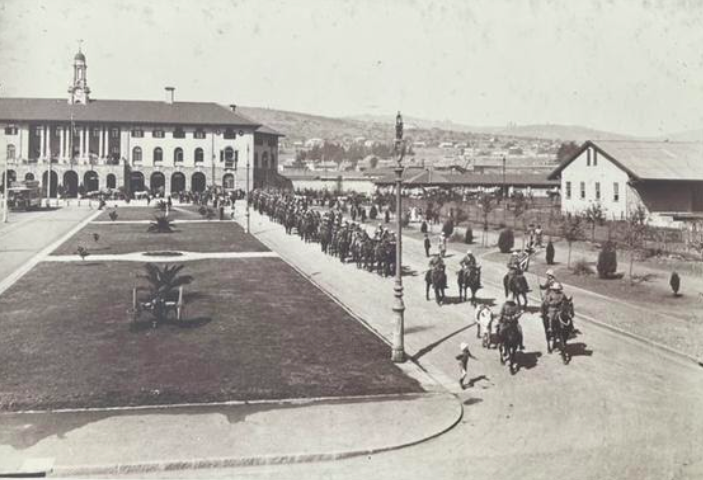 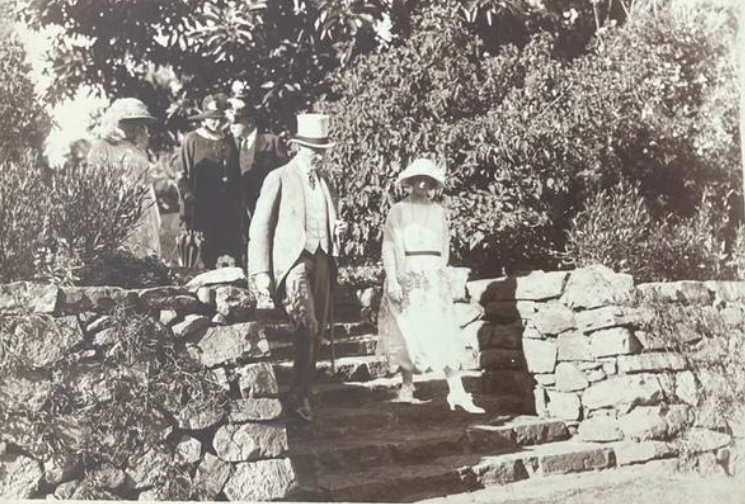 Possibly Arthur of Connaught, Governor General with his wife? Date and occasion?

Prince Arthur of Connaught with his family and others outside the residence of the Governor General - RS Watson Album.png 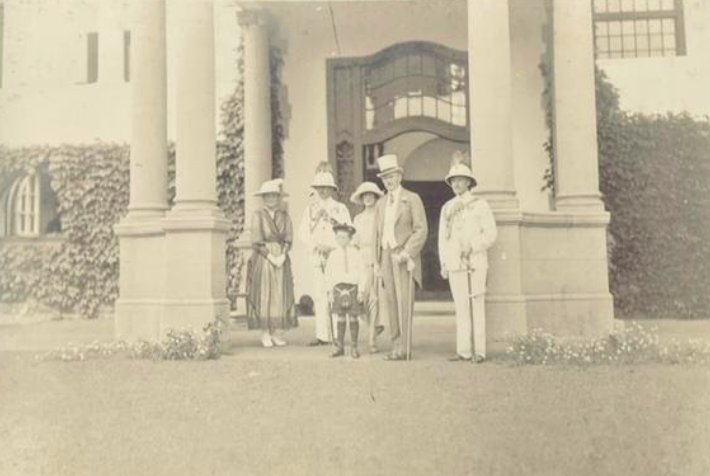 Prince Arthur of Connaught, Governor General of South Africa until 1924, with his family and others outside the residence of the Governor General (Government House – Baker designed). This house was later used as a residence for State Presidents and then as a guest house for visiting foreign dignitaries. 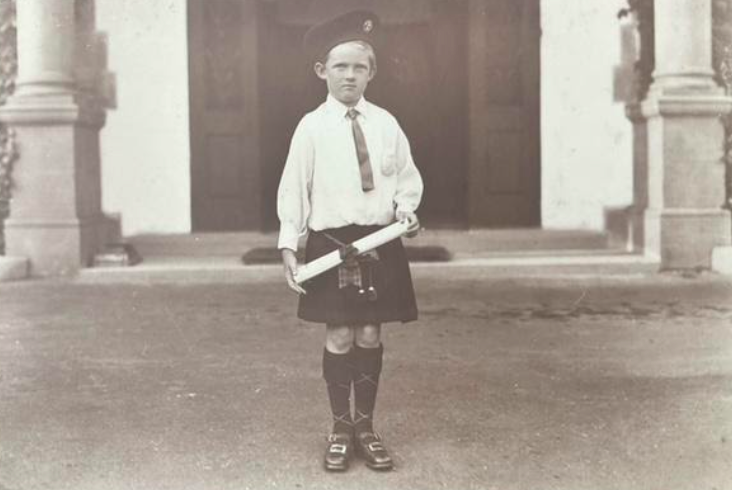 Alistair, the son of Prince Arthur of Connaught 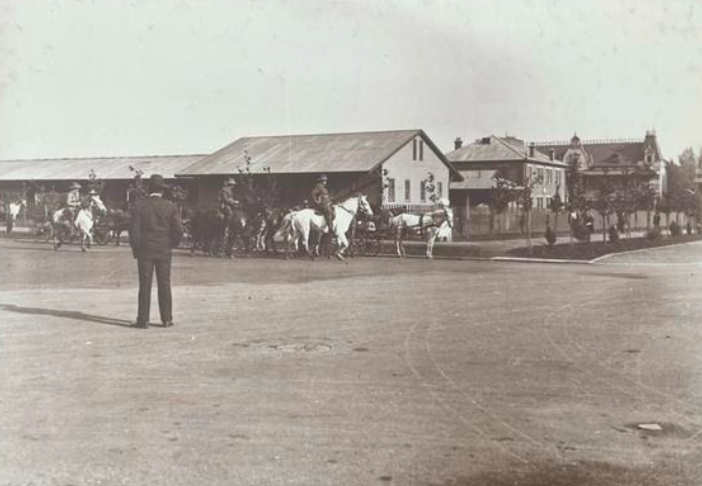 Unknown mounted soldiers on the streets of Pretoria. Date and occasion?

Guard of honour appears to be made up of soldiers from the 4th Mounted Rifles - RS Watson Album.png 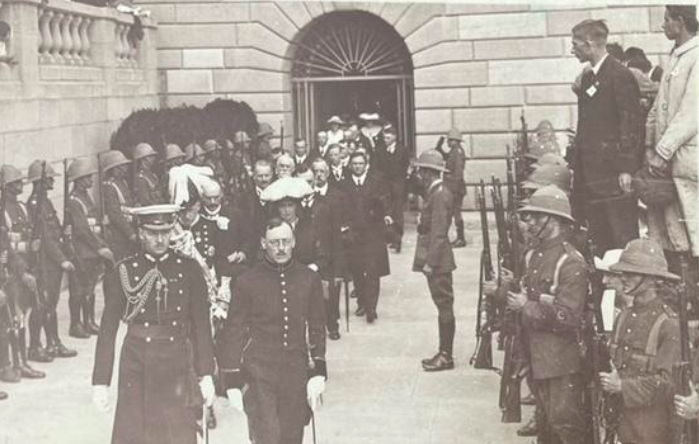 The people pictured are unknown but the guard of honour appears to be made up of soldiers from the 4th Mounted Rifles (Umvoti Mounted Rifles). Any additional details? 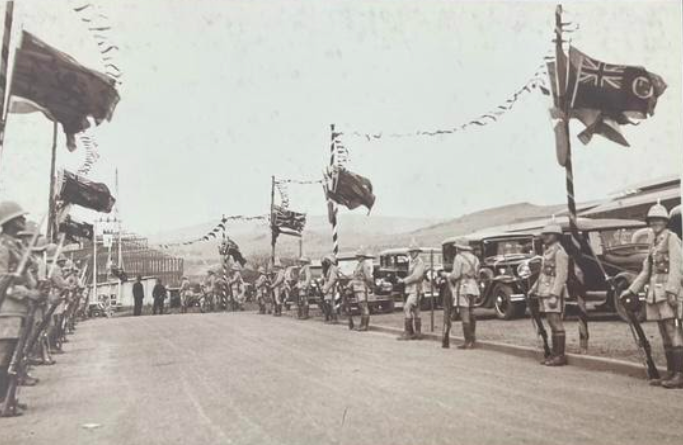 ‘The Red Ensign’ - the South African flag after Union can be seen in this photo. The Red Ensign was the official South African flag before the 'Oranje, Blanje, Blou’ was introduced in 1928, but the soldiers in this picture appear to be dressed according to 1934 regulations, so this photo would have been taken after the ‘Oranje, Blanje, Blou’ had already been introduced. The soldiers appear to be waiting for dignitaries to arrive. Occasion? Date?

The Earl of Clarendon giving a speech - RS Watson Album.png 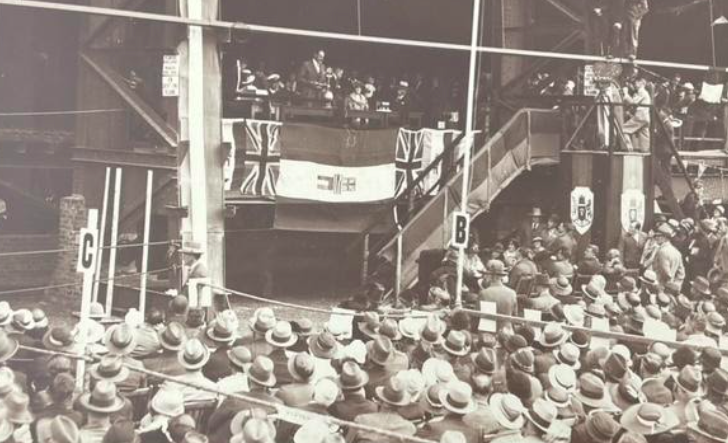 The Earl of Clarendon, the Governor General of the Union of South Africa from 1930 to 1937, gives a speech to a large crowd. The Oranje, Blanje, Blou flag may look like it is upside down, but actually it is mirrored, so the negative of this photo was probably reversed. Date and occasion? 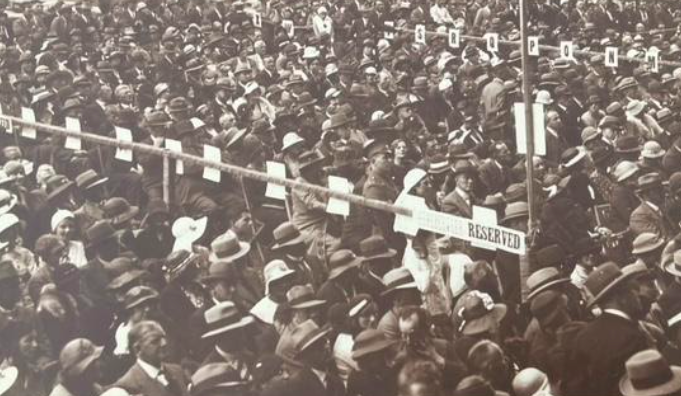 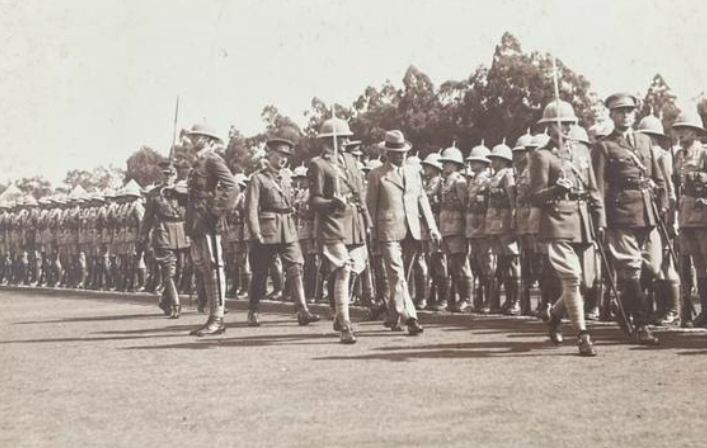 Duke of Kent on his visit to South Africa in 1934 - RS Watson Album.png 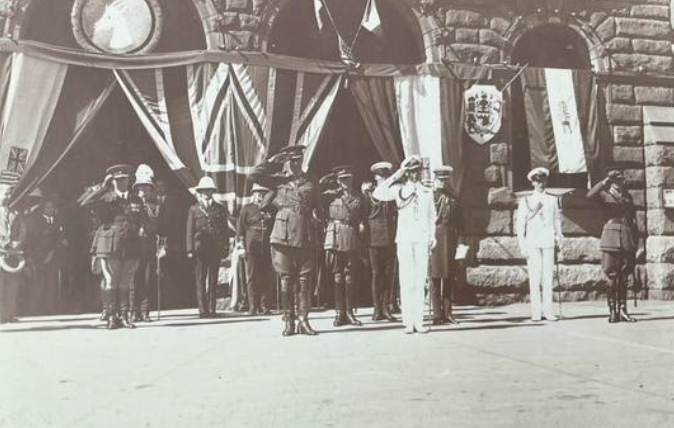 The Duke of Kent (Navy Uniform in the Centre) on his visit to South Africa in 1934. The Duke of Kent was the younger brother of King Edward VIII (who abdicated in 1936) and King George VI (who succeeded him) 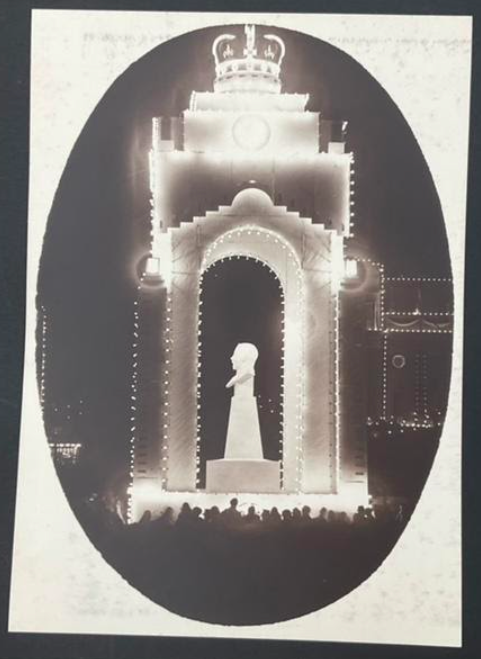 Unknown monument - Silver Jubilee Celebration of 25 years of George V in 1935. A night time photograph with crowd gathered in front, bust in centre of George V.

Unknown monument - appears to be for the Silver Jubilee celebrations in 1935 for King George V - RS Watson Album.png 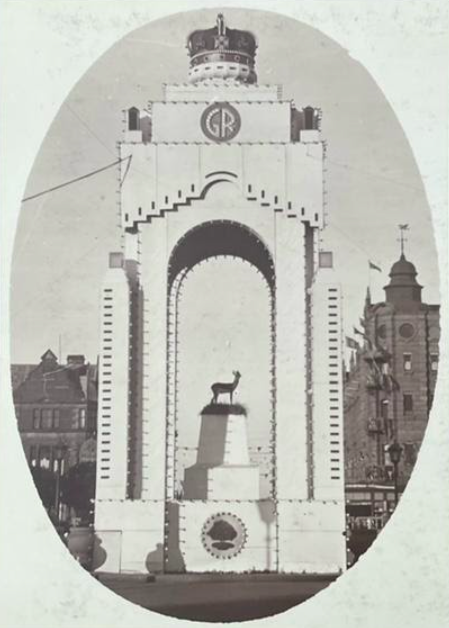 Unknown monument, appears to be for the Silver Jubilee celebrations in 1935 for King George V - GR insignia and crown. Appears to be near Tudor Chambers in Church Square Pretoria. 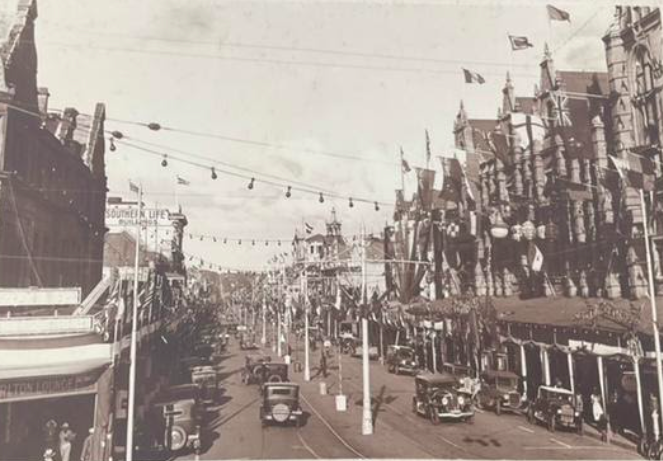 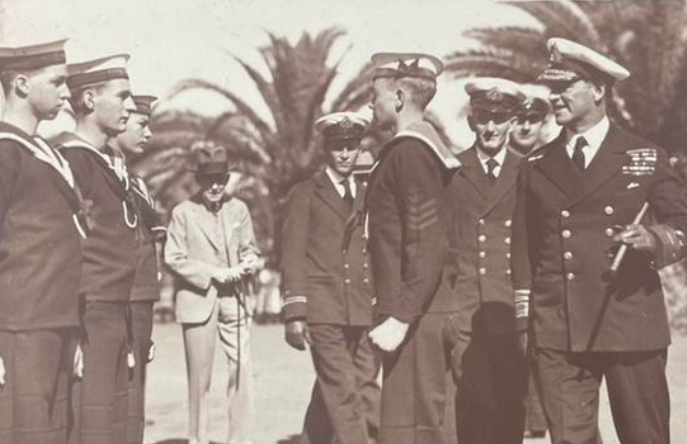 A Naval Inspection. Admiral on the right is possibly Admiral Edward Evans who commanded the Royal Navy Africa station in Simonstown in the 1930s. Naval cap tabs says 'Naval College' on them. 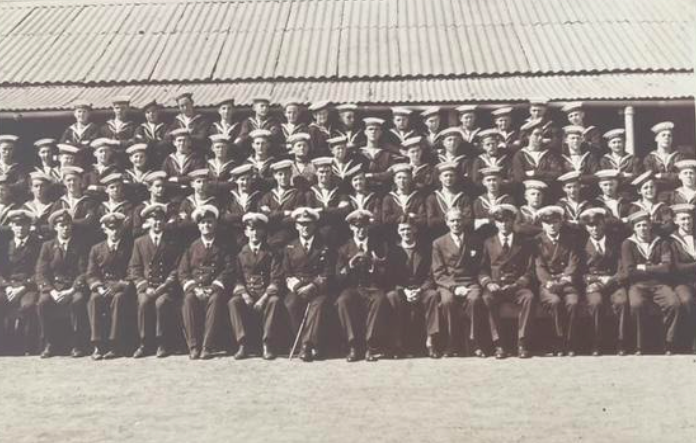 Possibly a group photograph of the Naval College? Location?

Main image: Welcome Arch, Church Square Pretoria. Perhaps during the visit of Duke of Kent in 1934?