Righting the wrong that was done to Esther and Bill Eaton 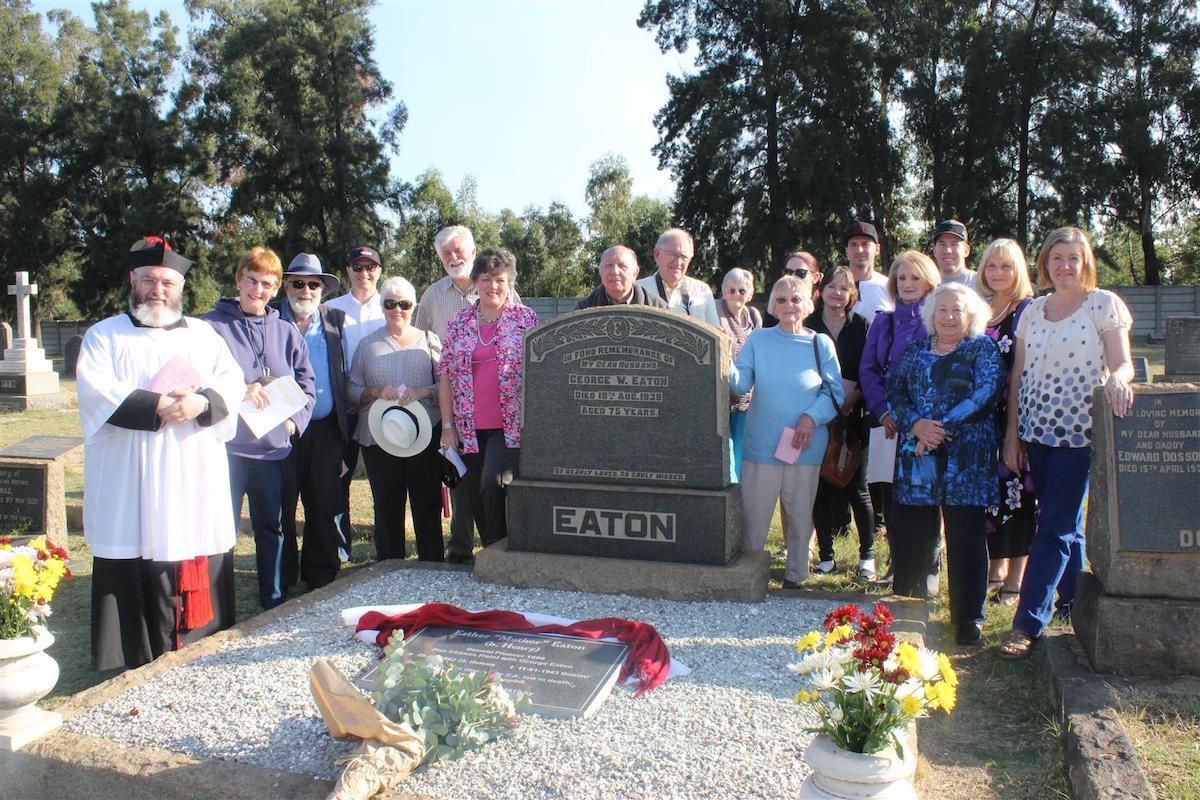 On 5 May 2018, a small group of about 20 people gathered at Rynsoord Cemetery in Benoni to remember Esther Henry/Eaton who passed away on 11 January 1943 at her residence, “The Firs,” Main Road, Benoni. A plaque was unveiled in remembrance of the Benoni pioneer who was separated by law from her husband, George William (Bill) Eaton in death. 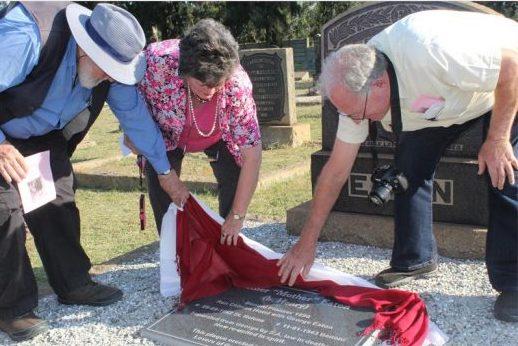 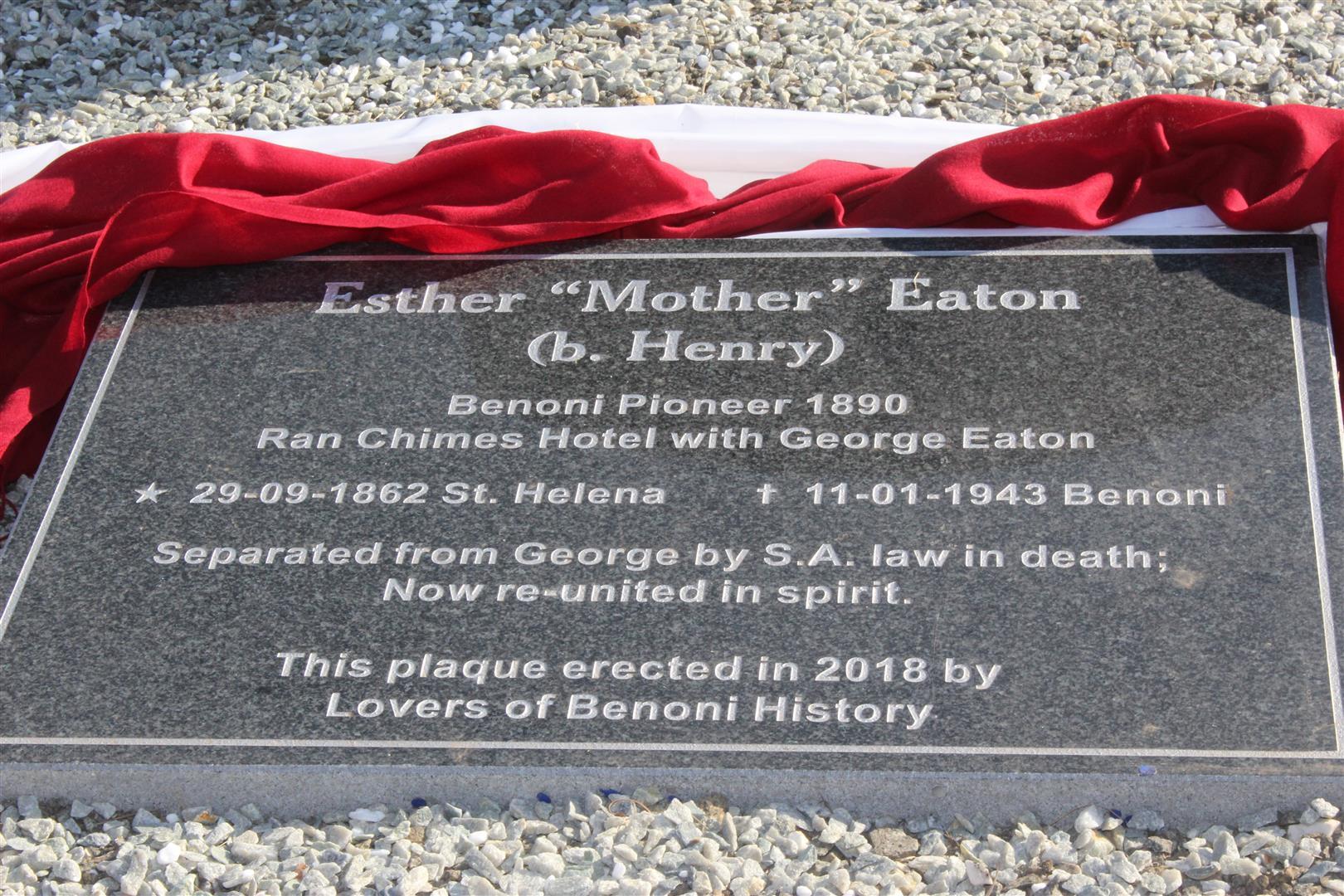 Esther was born on St. Helena Island on 29 September 1862 to a descendant of freed slaves and was the daughter of Samuel and Sarah Henry from Thompson’s Wood. Esther was baptised in St Paul’s Cathedral on 30 November 1862 on St. Helena. Because of her birth, Esther would be classed ‘coloured’ in South Africa.

It is unclear when Esther Henry arrived in South Africa and met up with Bill Eaton, however, she remained his faithful and beloved wife/partner for many years. Bill Eaton was born in Hull Yorkshire, England. 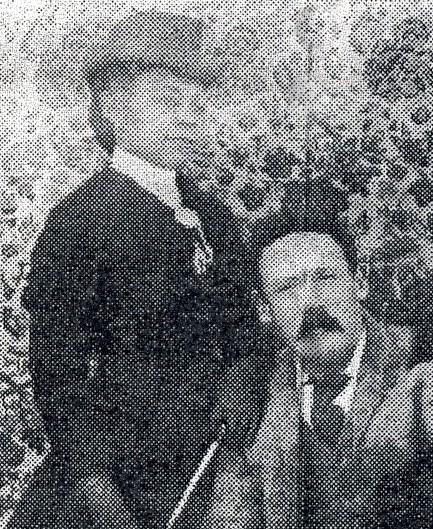 In 1890, Bill and Esther ran the Chimes Hotel on the East Rand near what was to become the town of Benoni. This was about the same time they got ‘married’ according to the rites of the Anglican Church, but not in accordance with the civil laws of South Africa. The religious ceremony took place at the Church in Benoni.

After the Anglo Boer war, Bill sold the Chimes to a businessman called Morris Lesser Pessen, a Russian Jew who rebuilt the Chimes with brick. 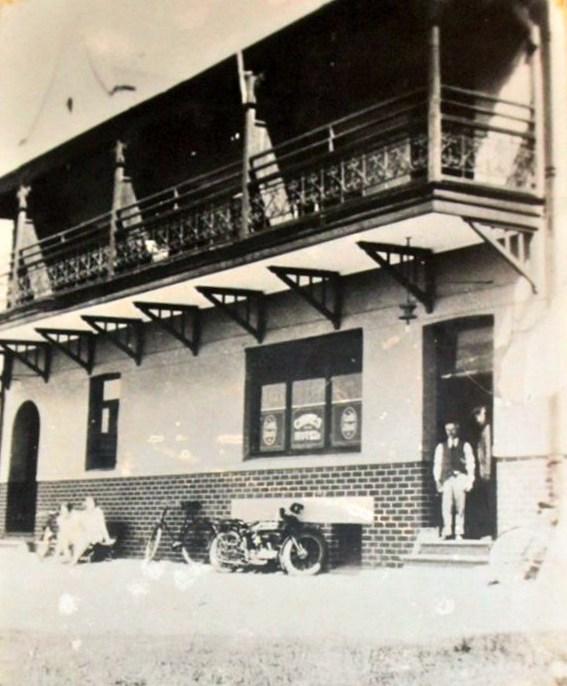 Bill then set up a greyhound racing track in Boksburg and founded the Eastern Districts Sporting Club. The course was one of the first greyhound tracks in South Africa and very popular. Bill was also a member of the Benoni Club and the Rand Sporting Club.

They settled at number 5 Sunnyside Avenue, Westdene where they fostered and adopted 3 children - Edith Lowe being one from Germiston who was abandoned by her mother shortly after birth.

“Mother Eaton” - as Esther was fondly known to all, was a well-known sight in Benoni. She was a fine, respected and very generous woman. People remembered her riding into town in her black carriage drawn by two white horses, sitting very erect and wearing a high hat with lots of feathers. Many times her journey would be to the market to buy food for the poor. She was a religious lady and did a lot of charity work through the church.

It was rumoured that the Eaton’s were the richest couple in the Benoni area. Their money, say some folk, came through winning the sweep stake. A lot also came through the Chimes as the miners stayed until their pay packets ran dry.

When Bill died on 19 April 1939, he was one of the wealthiest residents of Benoni, owning two houses and having numerous gold mine shares and shares in sporting clubs. At a time when normal houses could be bought for just over £500, “Bill’s” estate was valued at over £10,000 – most of it left to Esther. 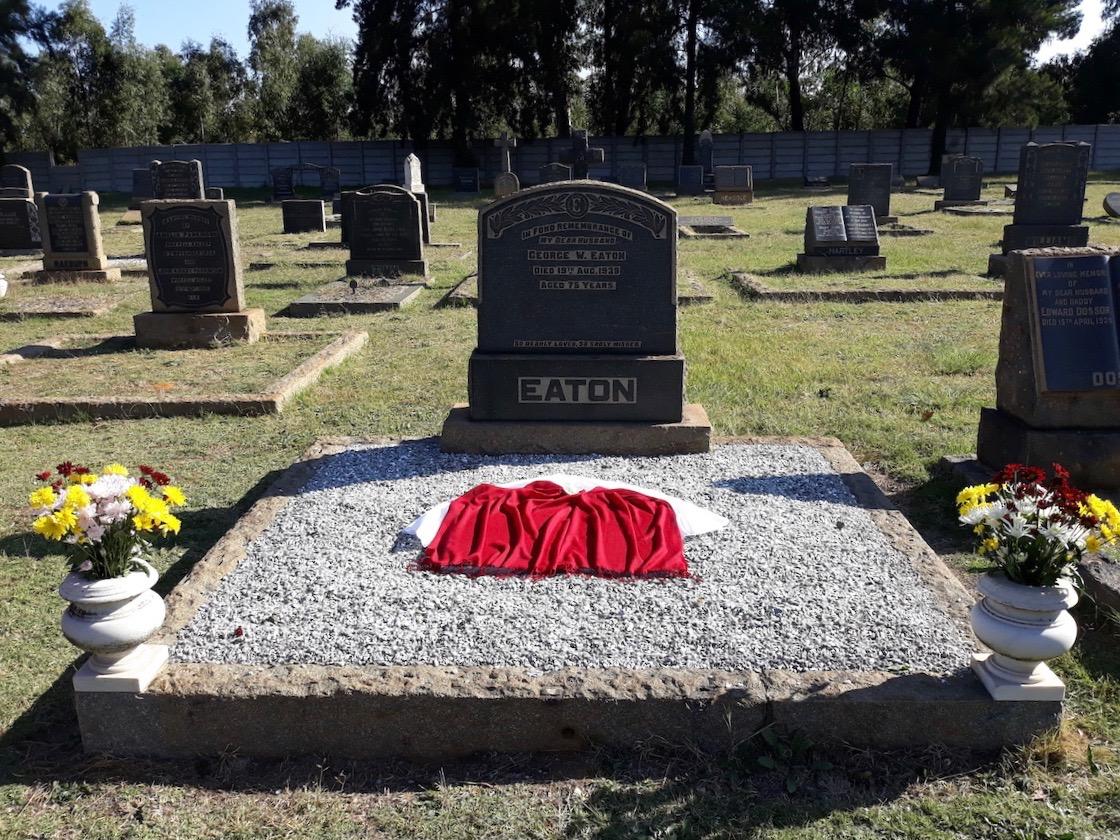 Esther discovered that she could not take ownership of the houses that Bill left to her in his will. In Benoni, if you were dusky-hued, you could not own a house. One of the houses that Bill left to Esther – the grand house where Bill died at number 5 Sunnyside Avenue - had to be sold on auction. Esther had to write a letter instructing the executors of George William Eaton’s estate to transfer the other house bequeathed to her by Bill (called “The Firs” in Dunswart and the house she was living in) to her adopted daughter Edith Edna May Lippiatt. (Born Lowe)

Possibly the crowning insult to “Mother” Eaton came after her death. Esther Henry/Eaton could not even be buried next to Bill, in the double grave which she purchased for him when he died in 1939. Instead, “Mother” Eaton was buried in an unmarked grave in Boksburg, in an obscure section of the graveyard set aside for “coloureds”.

David Thomas who resides in Australia and is the co-author of “Benoni Son of my Sorrow” encouraged Peter Wood and I to unite Esther with Bill in spirit. He came out to South Africa to be part of the ceremony and said that Egyptian tombs had the inscription ‘speak my name and I will live again’ and this is what we did. Peter Wood (historian), David Thomas and I got things rolling and contributed towards a plaque, flowers, Order of Service and other bits and pieces and gave Esther what she so deserved after 75 years, to be remembered at the grave she had been barred from.

The Dean from the St Dunstan’s Cathedral in Benoni, Simon Aiken said a prayer for Esther, who was a strong believer at the Anglican Church. 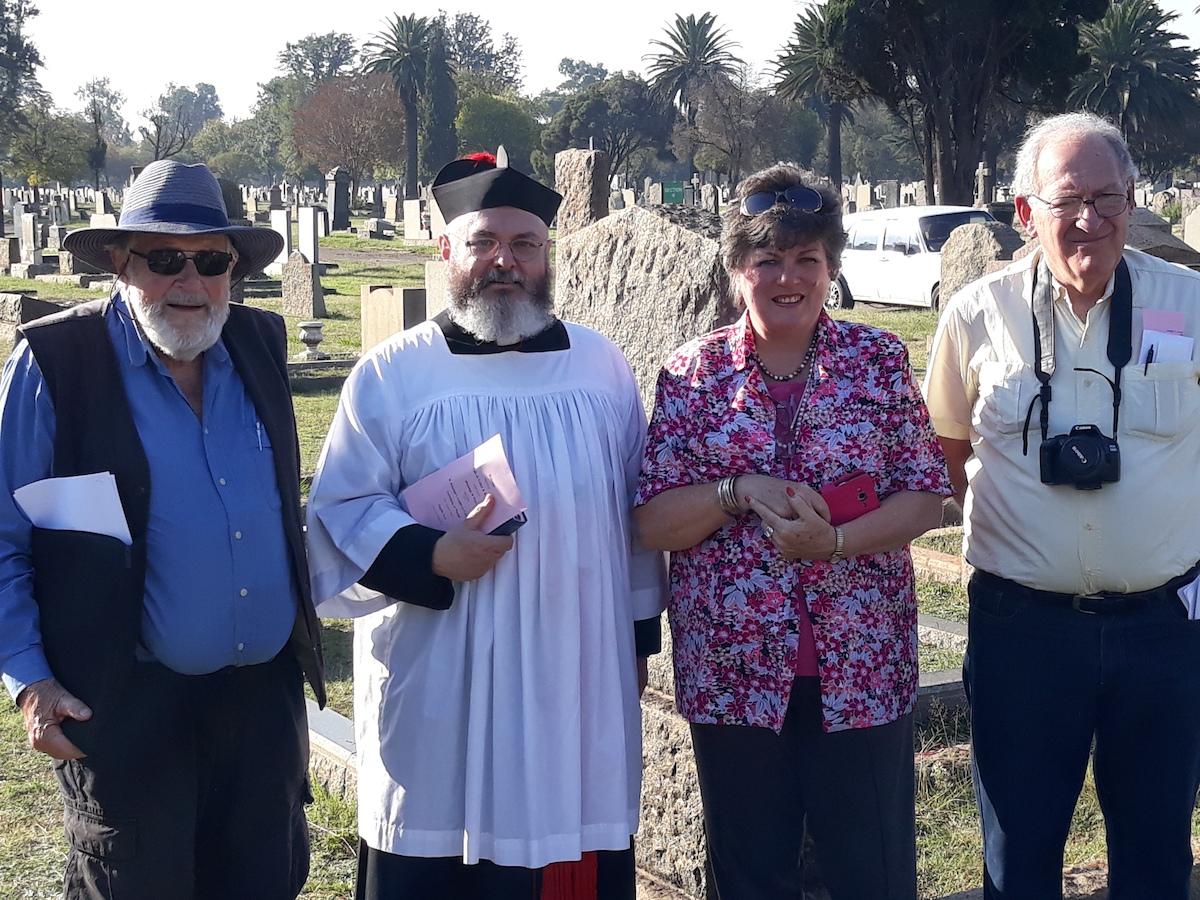 In her estate, Esther bequeathed some money to the Anglican Church, Benoni, the Spiritualist Church, Benoni and the St Pauls Anglican Cathedral in St. Helena. The bulk of her estate was bequeathed to Edith Lippiatt (Lowe), her adopted son also George William Eaton, Chronic Sick Home, Rietfontein, Etienne Dietloff Jordaan, Annie Dutlow, Olive Newton, and the children of Edith Edna May Lippiatt.

The final words from David Thomas’ address are worth quoting:

We are here today to attempt to right this wrong that was done to Esther and Bill Eaton through the placing of the stone of remembrance to be unveiled this afternoon. That stone not only speaks Esther’s name and celebrates her life, but also testifies that we who are here today, are members of a new South Africa which has left the old era of both legal and informal racism far behind. We are welcoming Esther and Bill into our new community and in so doing, we are repeating the words quoted by Martin Luther King: Free at last, free at last, thank God, we’re free at last.

About the author: Glynis was born in Johannesburg to Rita and William Ernest Leslie Cock. She was the eldest of 3 children. The family moved to Welkom in the O.F.S. in 1956. She started her schooling  in 1957 and graduated in 1969. Glynis married Charles Millett-Clay in 1971 and they had two children. She moved to Benoni in 1977 and still resides there. Glynis is a genealogist (not professional) and has traced her family lines on both sides. She founded the Facebook Group, Benoni, History Now and Then in 2013 and has enjoyed researching and writing on the town and surrounds ever since. She is also an enthusiastic collector of vintage postcards, stamps, dolls and anything that takes her back to her childhood. She loves old architecture, fashions, old furniture and gardening.