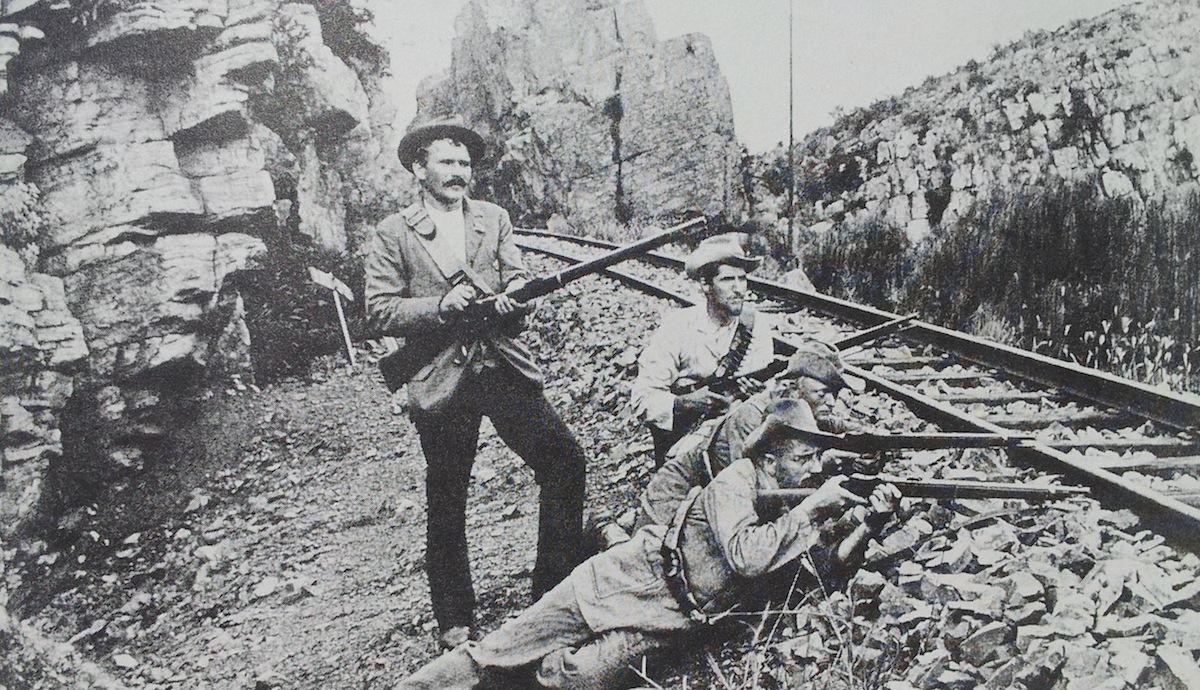 Following hot on the heels of the 'Race to the Rand' here is the third installment of the History of Southern African Railway Series by Peter Ball. The article looks at the role of the railways during the South African War (the Second Anglo-Boer War).

At the end of the Nineteenth Century the railway network in Southern Africa was near to completion as all the major trunk lines had been laid down. Bulawayo, in Southern Rhodesia had been reached, in 1897, with plans to extend the line still further into central Africa, with the eventual hope of linking up with a line coming down, through the Great Lakes region, from Egypt and the Sudan; the fabled Cape to Cairo Railway Railway construction ceased abruptly in 1899 when it became plain that war was on its way. A war that would decide, once and for all, who would control South Africa.

The Second Anglo-Boer War, which raged for 2 years and 8 months, between the 11th October 1899 and 31st May 1902, was the outcome of the ideological differences between the British Empire, at its zenith and a small but very rich young republic, known as the Transvaal. The reasons for the War have been made plain in other texts, notably “The Boer War” by Thomas Packenham (published 1979) and suffice to say here that the War was a tragedy that should never have been allowed to happen.

It could be argued that the first shots of the War were fired four years before, on the 2nd January 1896, when the Jameson Raid failed, at the Battle of Doornkop, west of Johannesburg. The four year period between the Raid and the invasion of Natal by Boer commandos was really an uneasy truce between Boer and Brit; remembering that most of the people living in Johannesburg were in fact British.

The Boer Republics, Transvaal and Orange Free State (O.F.S.), had joined forces to invade the British colonies of the Cape and Natal in the hope of defeating the enemy in a short war, which would bring about a united South African Republic stretching from Table Bay to the Zambezi (as stated in a secret memorandum by Jan Smuts, 4th Sept 1899). However after initial successes the Boer Commandos (citizen force) were in retreat, being pushed back by the British Army that was marching to Pretoria, led by Lord Roberts VC (“Bobs”).

Although Pretoria was the capital of the Transvaal the true prize was Johannesburg and the gold mines, which was taken on the 31st May 1900, without resistance as a deal had been struck to save the mines from being sabotaged.

The British marched into Pretoria on the 5th June 1900 with the belief that the War would soon be over, but this was far from the truth as the Boer Republics determined to continue the fight by waging guerrilla warfare against the enemy, which caused the war to go on for two more grim years. The Boers that fought on became known to posterity as the “Bitter Enders”. 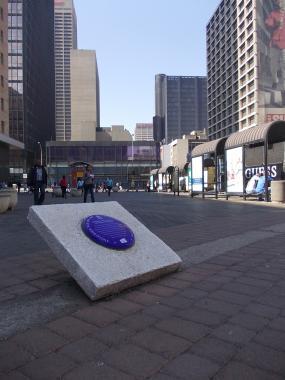 A plaque marking the acceptance of the Boer surrender of Johannesburg

General Sir Herbert Kitchener became Commander-in-Chief (C-in-C) of the British forces on the 29th November 1900, succeeding Lord Roberts and was left to deal with the continuing Boer resistance. He came to South Africa as a national hero, known as Kitchener of Khartoum, having recently won the Battle of Omdurman in the Sudan (1898). In the campaign to take back Khartoum from the Dervishes he had built a military railway through the Nubian desert, for the purpose of conveying troops, materiel and supplies. On the advice of Cecil Rhodes the line was built to the Cape Gauge (3’-6”) instead of the narrower gauge of 2’-6” originally proposed; a portent to the possible link up of the railway that Rhodes was building (his Cape to Cairo Railway). The line was engineered by a young officer in the Royal Engineers; a Canadian named Edouard Percy Girouard, who Kitchener (a Royal Engineer himself) recognised as the man for the job.

Because of his “track record” Girouard became the Director of the Imperial Military Railways which took over the running of the railways in the O.F.S. and Transvaal and he was responsible for co-ordinating the reconstruction of the railway lines and bridges that had been blown up by the retreating Boer forces. 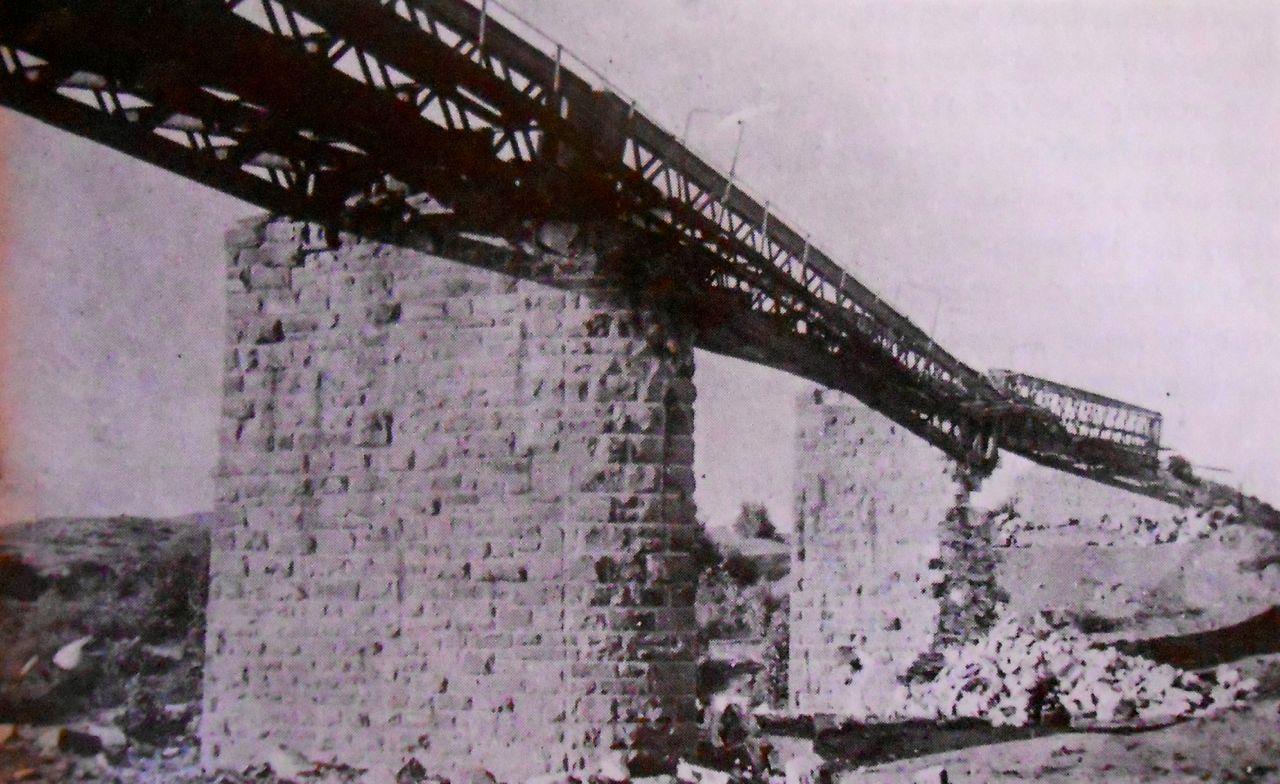 Low level temporary bridges were placed alongside those that had been destroyed, in order to get traffic flowing again. From the outset of the War, the railway lines (and the associated telegraph) were crucial to the British war effort as the railways were the only means of rapidly deploying troops and conveying supplies, in a country devoid of good roads. On one hand they were a blessing and on the other a curse, as the British troops of necessity were tied to them for their supplies and communication and thus were vulnerable to attack. The Boers whose great advantage was their mobility on horseback and their knowledge of the Veldt had no such need for the railway.

As the War dragged on Kitchener was under political pressure to end it as soon as possible, this imperative brought about his “Scorched Earth” policy of burning homesteads and crops and placing women and children into tented camps behind barbed wire; the notorious Concentration Camps, which were dotted along the railway lines. The O.F.S. was particularly hard hit by these acts against the civilian population, as has been documented in the book “Fire in the Sky”. This was particularly cruel as the O.F.S. had been on friendly terms with the Cape Colony before the War and only sided with the Transvaal as late as 1898, when President Steyn signed a treaty with President Kruger.

The people of Britain also awoke to what was going on in their name and the ruling Conservative government were harangued by the Liberal opposition MP, David Lloyd George over the alarming death rate in the South African Camps. Emily Hobhouse had seen, first hand, the poor conditions that the Boer women and children had to endure and reported on them, even when the establishment tried to discredit her.

By late 1900 the railways had become the Achilles heel of the British, for they could be attacked and disrupted with ease by the Boer commandos’ hit and run tactics. The British were now caught in a vicious circle, for more and more of their enormous army was needed to protect the railway along which came the supplies to feed the enormous army. A game breaker was needed and this came in the form of the Blockhouse and barbed wire system, whereby lines of barbed wire fencing were guarded at intervals by masonry and corrugated iron blockhouses. From January 1901 to May 1902 there would be over eight thousand blockhouses built (at £16 each) covering a distance of 3 750 miles (6 000 km) across the Veldt. 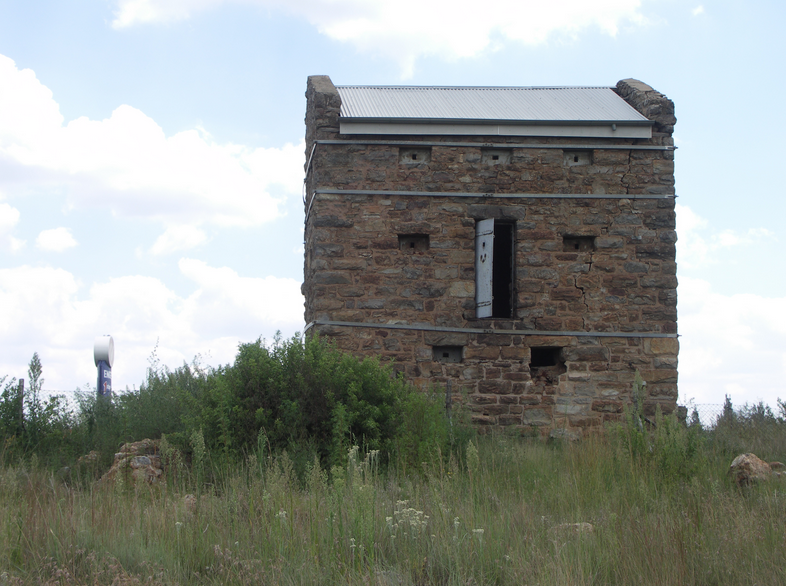 The Witkop Blockhouse (The Heritage Portal)

By 1902 the Boers had given their best against all odds, but the time had come to parley with the British and on the 31st May, exactly two years after Johannesburg was taken, they agreed to the terms set by Lord Kitchener and signed the Peace of Vereeniging, at Melrose House Pretoria.

The O.F.S. and Transvaal were now part of the British Empire and a time of reconciliation and reconstruction was to follow, which lead to their self government by 1907. The long awaited unification of the four provinces into the Union of South Africa occurred on 31st May 1910, with Louis Botha (a Boer general) becoming the first Prime Minister. How this was to influence the operation of the railways shall be discussed in the next installment.