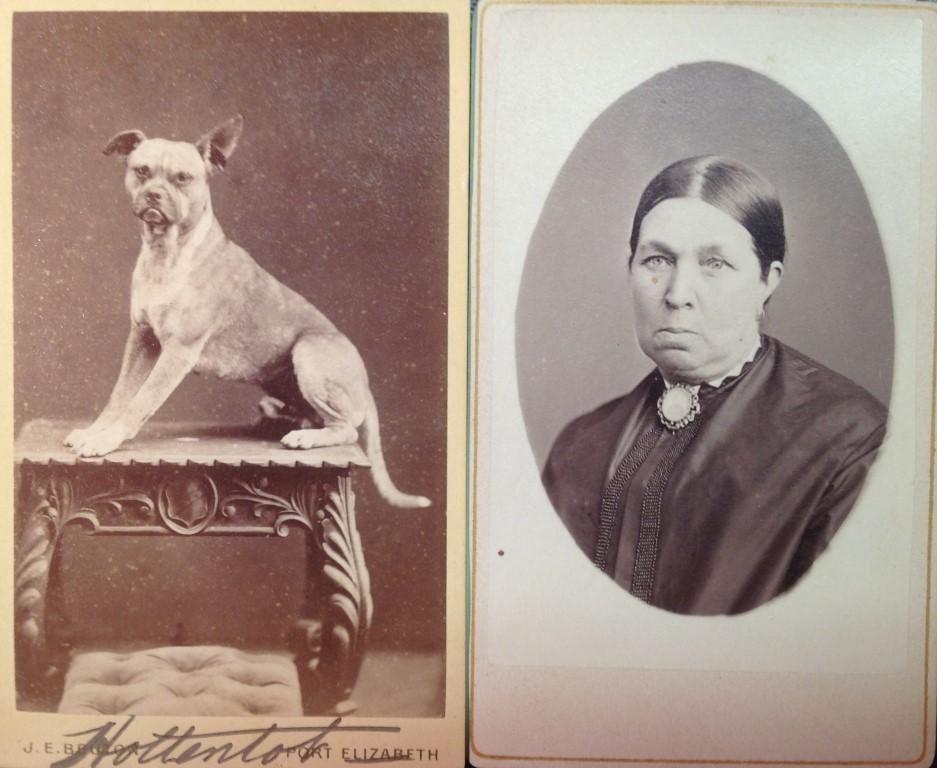 Which one of the two above is the happier sitter? Would it be old Hottentot on the left (Carte-de-Visite photograph by Port Elizabeth based photographer J.E. Bruton- Circa 1878) or the lady with the comical facial expression (Carte-de-Visite format photograph – photographer unknown – Circa 1880)? Psychology students often have to attempt to link an emotion to the expression observed in others. Could her expression be viewed as anger, disgust, embarrassment or simply laughter that is being suppressed?

In the author’s vast photographic research collection, there are a number of photographs that deviate from the formal, dull or even stoic studio photographs produced during the Victorian and Edwardian eras. Some of these simply have to be shared.

This article contains some images that may be of interest from both a humorous or curiosity perspective. Granted, some of the humour is purely from the viewer’s perspective. What one views to be humorous or even curious, another may not. Irrespective, the images included deviate from photographic norms in existence then.

Looking at photographs from the Victorian area and beyond, people are hardly seen smiling. Every-one looks so serious. Although it has been suggested that poor dental hygiene was the reason for this, the real reason was long exposure times which made holding a smile difficult.

The resultant images make it seem that there was no joy in their lives or that they could not have fun. Although they may have had their own social, political or economical challenges, they would have been full of smiles and laughter like any other.

Photography back then was serious business and a rather formal process resulting in the formal images we are presented with today. Photographs of that era could however turn out to be funny, peculiar or even creepy.

Images were generally not taken with the intent of being humorous, yet some ultimately may result in a smile or two from the viewer.

Initially there would have been some discomfort standing in front of a large contraption (studio camera), having to follow the photographer’s instructions whilst observing the commotion around the camera. The sitter may also have been thinking: How is it possible that this activity could produce a likeness of being?

Some individuals would have felt self-aware, potentially also feeling uncomfortable with the long exposure times.

Henri Gros, the Pretoria based photographer even advertised during the 1870’s stating: Intending visitors who object being stared at while sitting, are kindly requested to come unaccompanied.

Funny or peculiar vintage photograps can be divided into multiple categories, namely:

The end result depended on the photographer’s skill, creativity and personality plus the mood of the sitters which most certainly would have had an influence on the final image.

The skill of a photographer played a critical role. The larger the group, and the more children in the group, the more challenging it would have been to control the group, which could have some disastrous end results. More so during the first 30 years or so after the invention of photography. It was important for children to sit still – an impossible task. 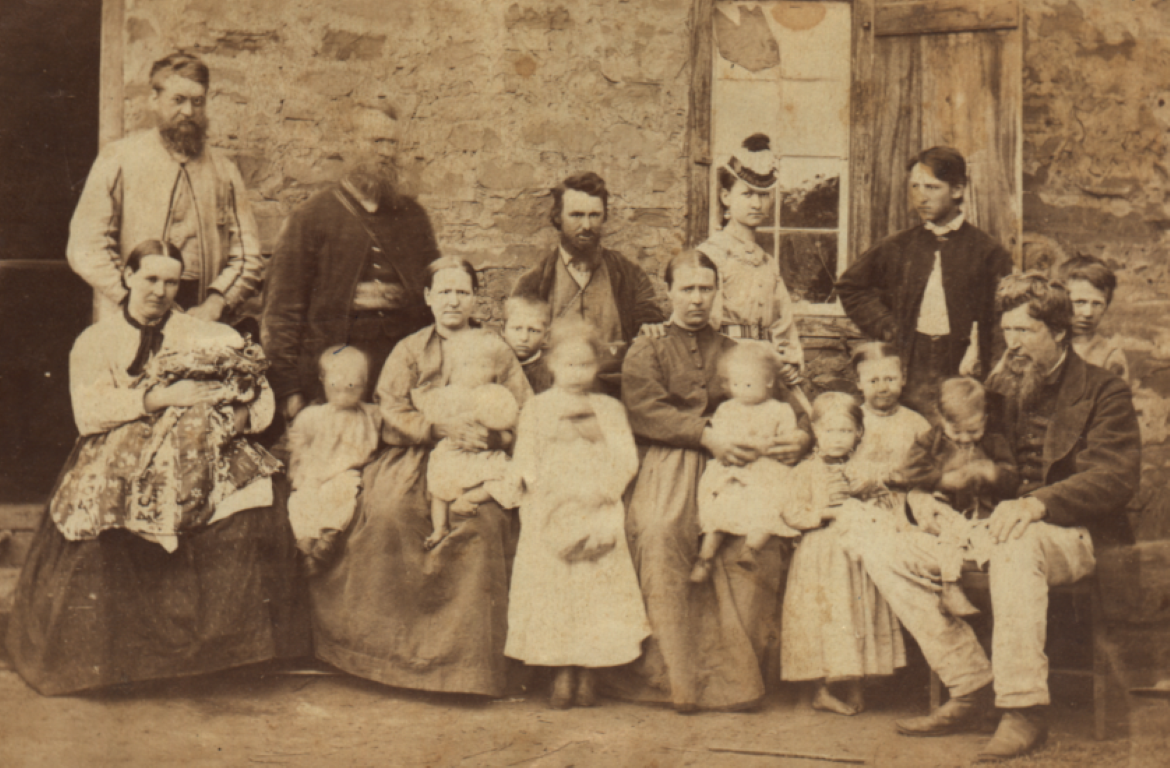 Large family photo (circa 1868 – photographer unknown). The children simply could not sit still resulting in the multiple ghostly figures. What does the photographer do? He adds the children’s eyes in pencil on the final picture 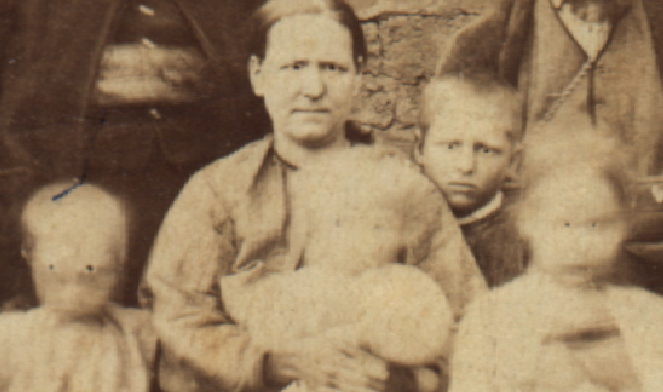 The end result. You created a little monster Mister photographer. When last did you have your eyesight tested or did you have one whiskey too many? The child on the left is looking down, resulting in the photographer placing the eyes on the forehead.

Images produced during time of conflict

Humour was important during times of conflict. During the Anglo-Boer war many humorous postcards were produced especially around the key personalities involved in the conflict. Some of the photographic images produced at the time (such as the two below) may not have been intended to be humorous, but looking at them today results in us seeing some humour in them.

Cabinet Card photo of two unknown British soldiers by Lesley Ford based in Queenstown Circa 1902 via Carol Hardijzer.jpg 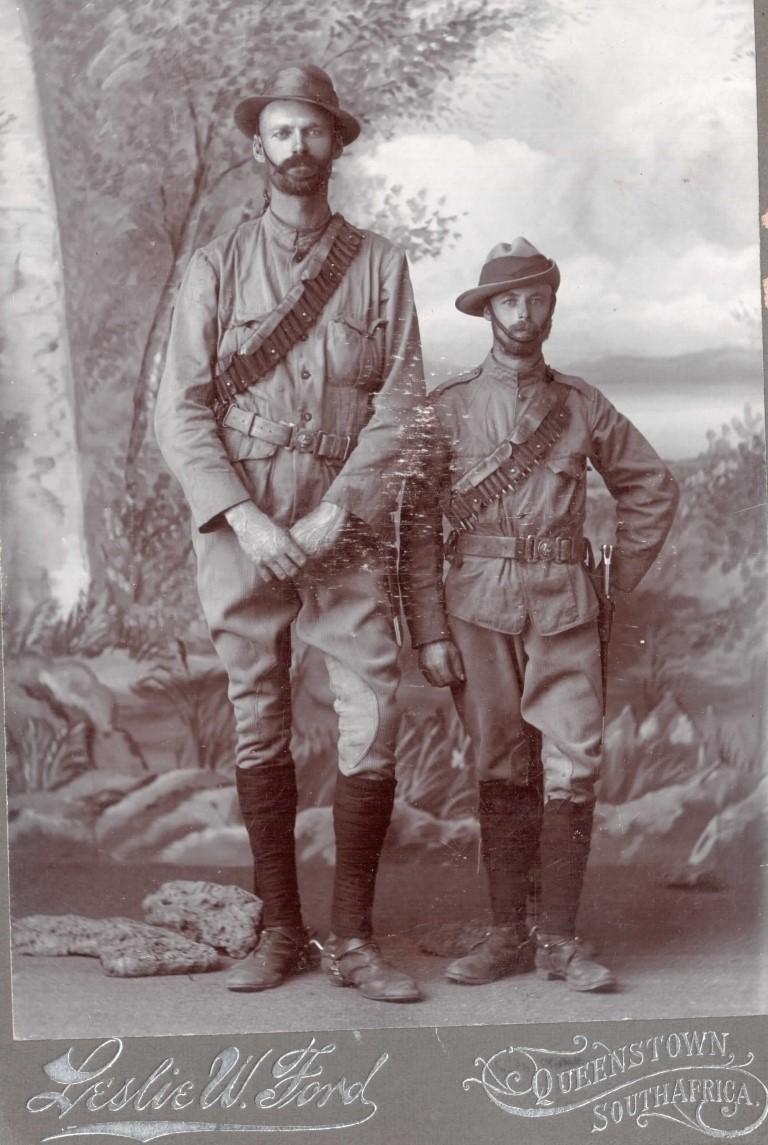 The tall and the short of it. Cabinet Card photo of two unknown British soldiers by Lesley Ford based in Queenstown. Circa 1902

An Australian soldier on South African soil during the Anglo-Boer war circa 1902 via Carol Hardijzer.jpg 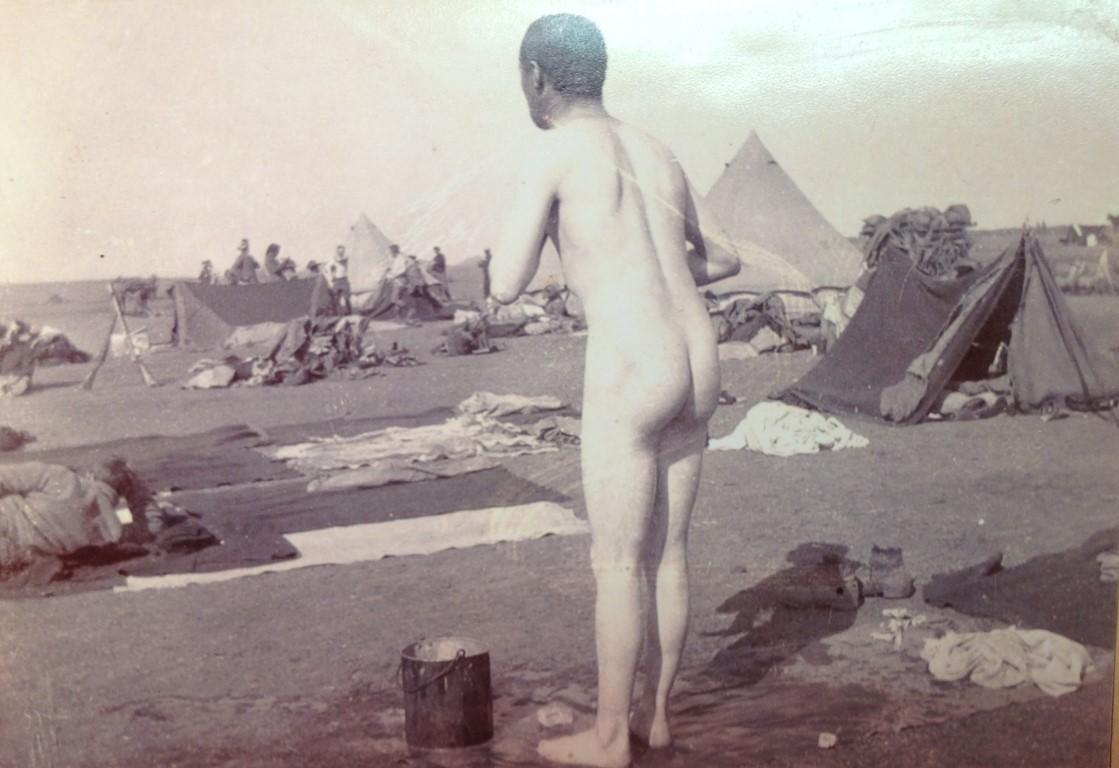 Nudity? Nope – necessity. A man also needs to wash during the war. An Australian soldier on South African soil during the Anglo-Boer war. Circa 1902 – photographer unknown

The first photograph ever taken of a human being was on a French boulevard during 1839. The photographer was photographing a street scene.  The resultant picture gives the impression of empty streets, because with long exposure times any moving objects would not be captured on the final image.

One unknown gentleman however decided to have his shoes polished by a shoe polisher on a street corner. He stood still long enough for him to be captured on the final image.

During the long exposures required by nineteenth-century photographic processes, if a person, animal or carriage moved from its initial position, a blurred faint residual impression of it remained on the negative and appeared on the print. Due to the transparent whitish tone, these images are referred to as ghost photographs.

Photograph taken at the Pietersburg Railway station - Circa 1902 via Carol Hardijzer.jpg 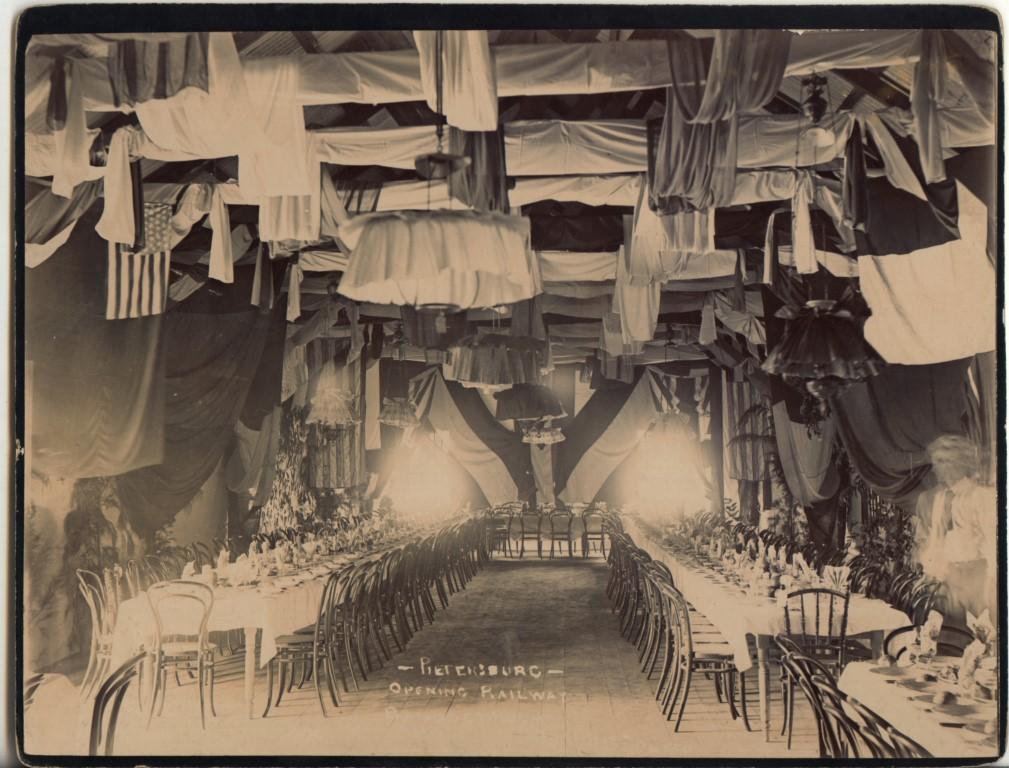 Look – a ghost on the right! Photograph taken at the Pietersburg Railway station (Circa 1902). Photographer unknown 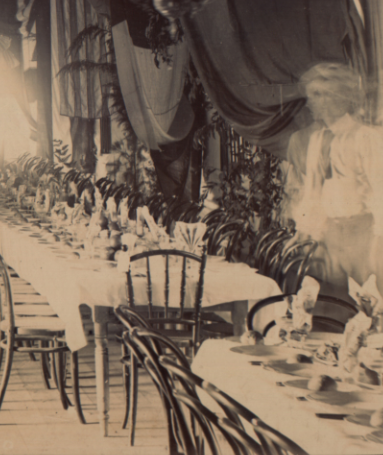 From this enlargement it is clear that the lady walked in, saw the photographer and turned around to leave the hall resulting in a ghost like image remaining. This suggests that the exposure time could have been around 10 seconds plus

Ghost photography - Girl with no arm via Hardijzer.jpg 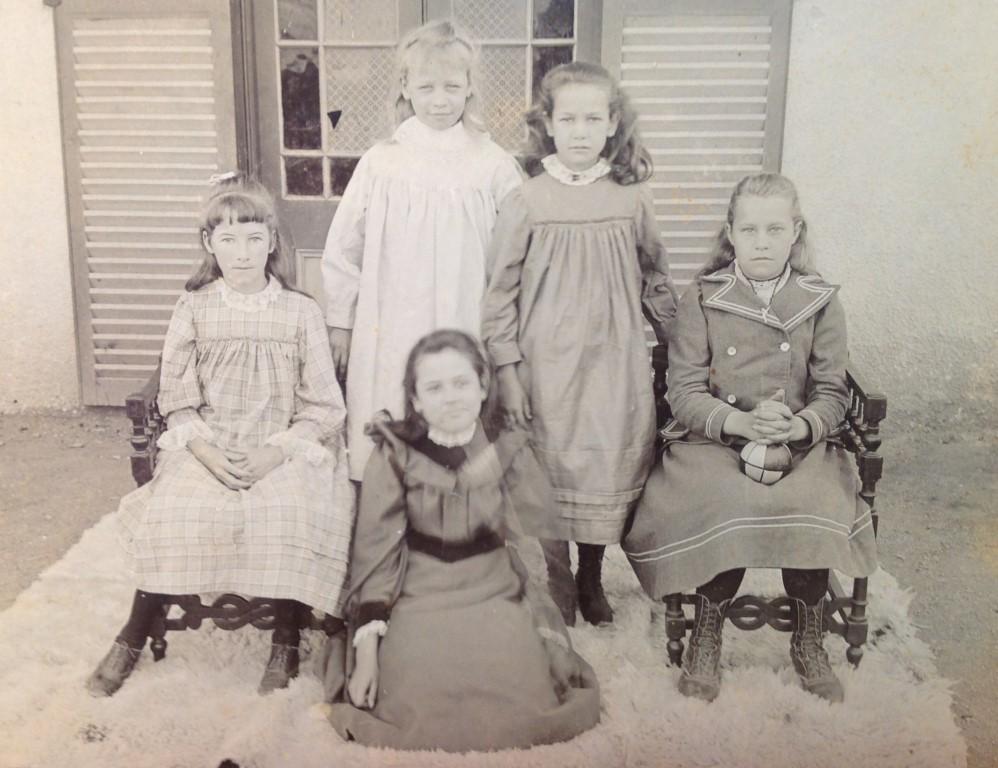 Girl with no arm. In reality, the girl in the middle probably had an itchy nose. The movement of her arm makes it seem as if she is without a left arm (Circa 1905 – photographer unknown)

Photoshop principles were even applied more than a hundred years ago. Images could either be produced as spirit photography, combination prints or be amended by having it cropped or have part of images deleted by covering or scratching out unwanted portions of the image prior to the final paper version being produced.

Example of a combination print - Circa 1870 via Carol Hardijzer.jpg 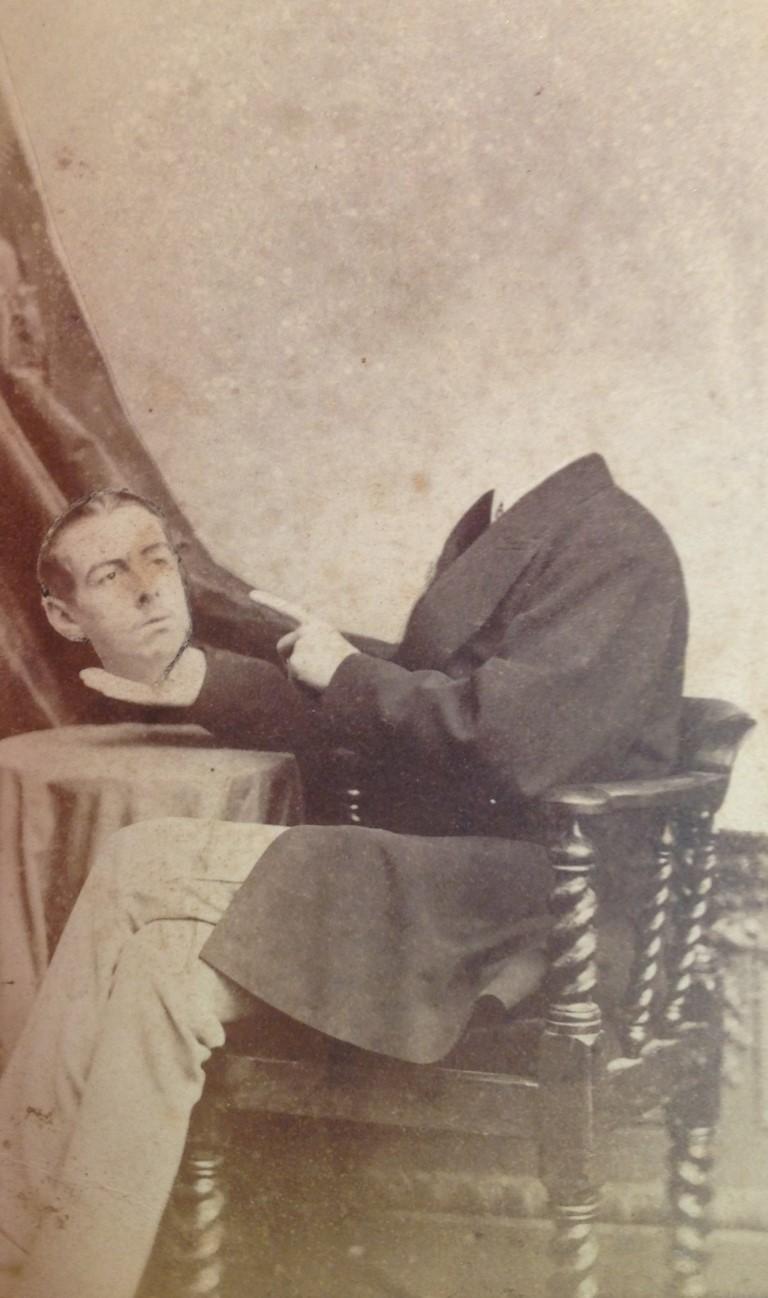 Example of a combination print. Circa 1870 – Although by a British photographer it was found in a South African family photo album. Images of this nature were popular. Photographers also demanded a higher price for them.

The author has not come across any South African produced spirit or decapitation images to date, but suggests that they may exist. The demand in especially Europe and America for these type of images were high.

Unknown photographer circa 1886 - Father with his child - someone missing - via Carol Hardijzer.jpg 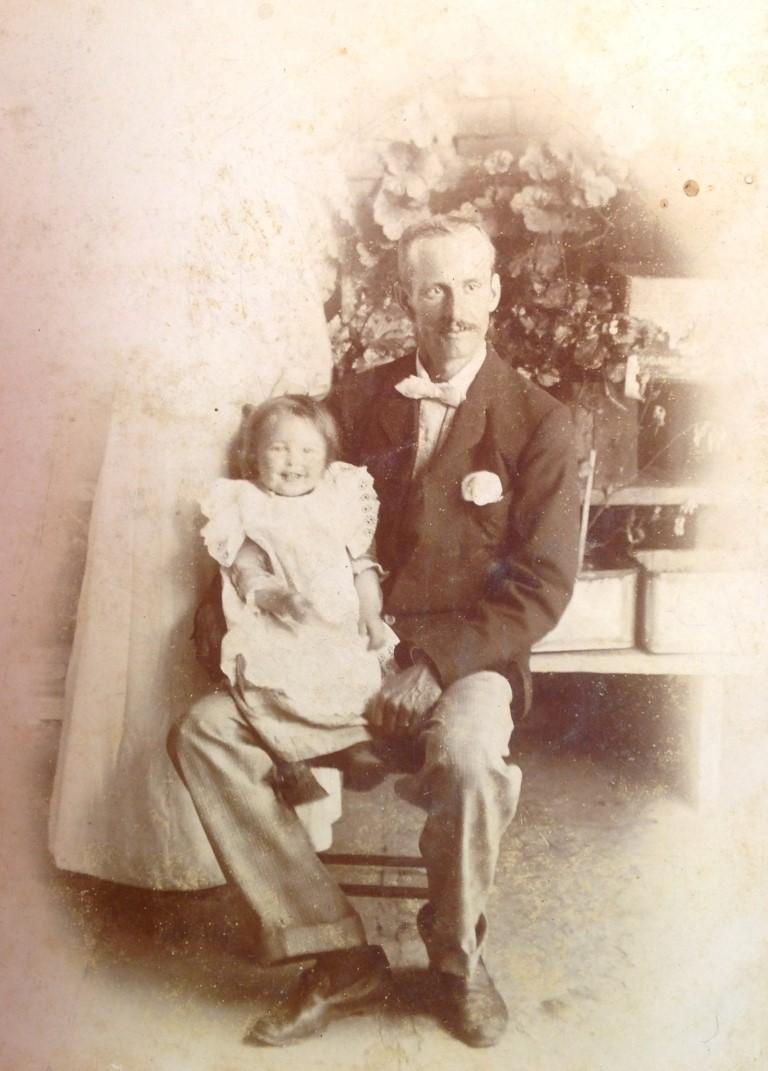 One of the dullest photographs in the authors collection is that of a gold ore bearing rock (circa 1873).

What remains intriguing are photographs of mules and donkeys taken in makeshift studios. It begs the question, why would people have wanted to take photographs of these animals? Did the owner bond with the animal because they potentially endured many days together traveling between town? 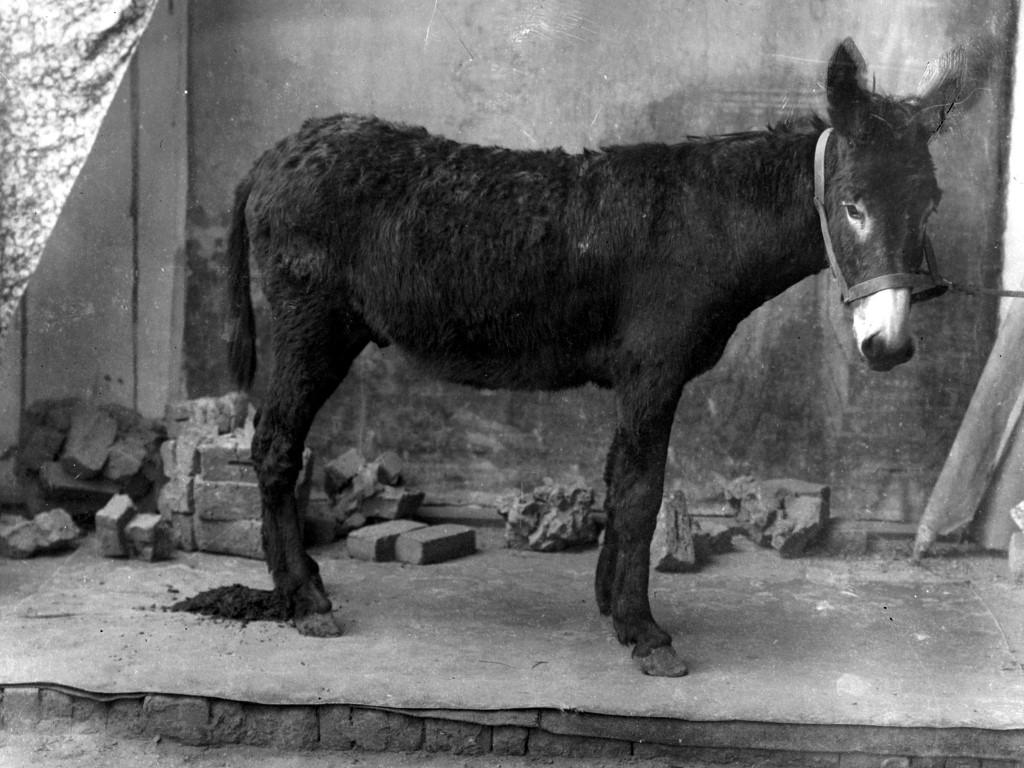 Who would want a photograph of their donkey/mule? An even more important question: Who would have cleaned up afterwards? The photographer or the owner? Photograph taken in makeshift studio Circa 1905 – Image from original glass negative - Photographer probably was John Scholtz based in Aberdeen in the Karoo

Old photo of a sheep via Carol Hardijzer.jpg 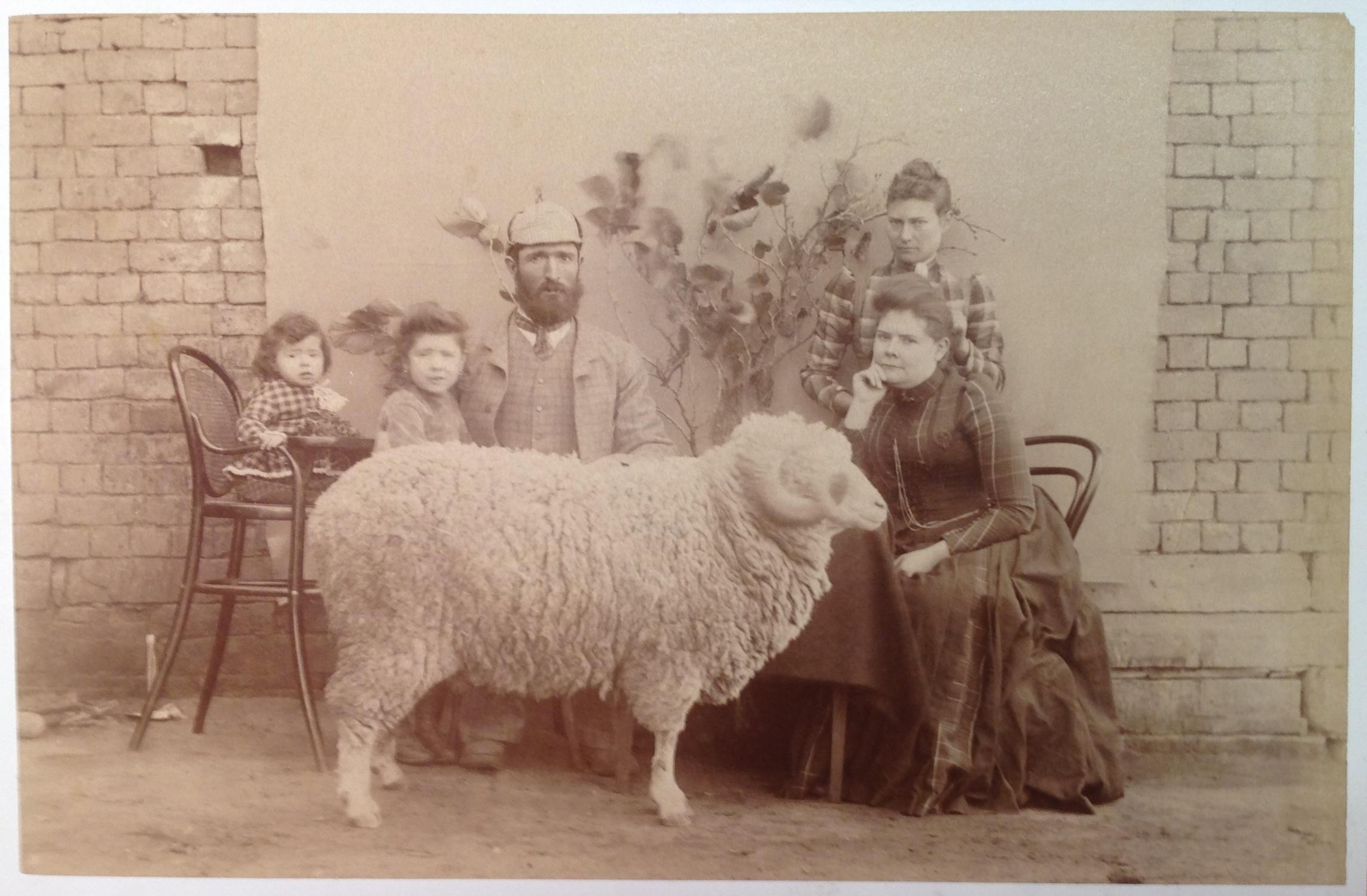 Must have been a prize winning sheep. The lady on the right does not seem happy with appearing in the image with a sheep (Circa 1905 – photographer unknown)

Many photographers allowed their clients to bring dogs into the studio and photograph them with their much loved pets. A large percentage of images identified are either of people with their dogs or horses. Ironically, hardly any images of cats seem to exist. This could be because cats were not as common then as household pets or simply because transporting of a cat to a studio, by cart a number of hours away, was more problematic. An interesting cabinet card has been identified by the author of a young girl holding her pet meerkat (Circa 1890).

Officer and his dog via Carol Hardijzer.jpg 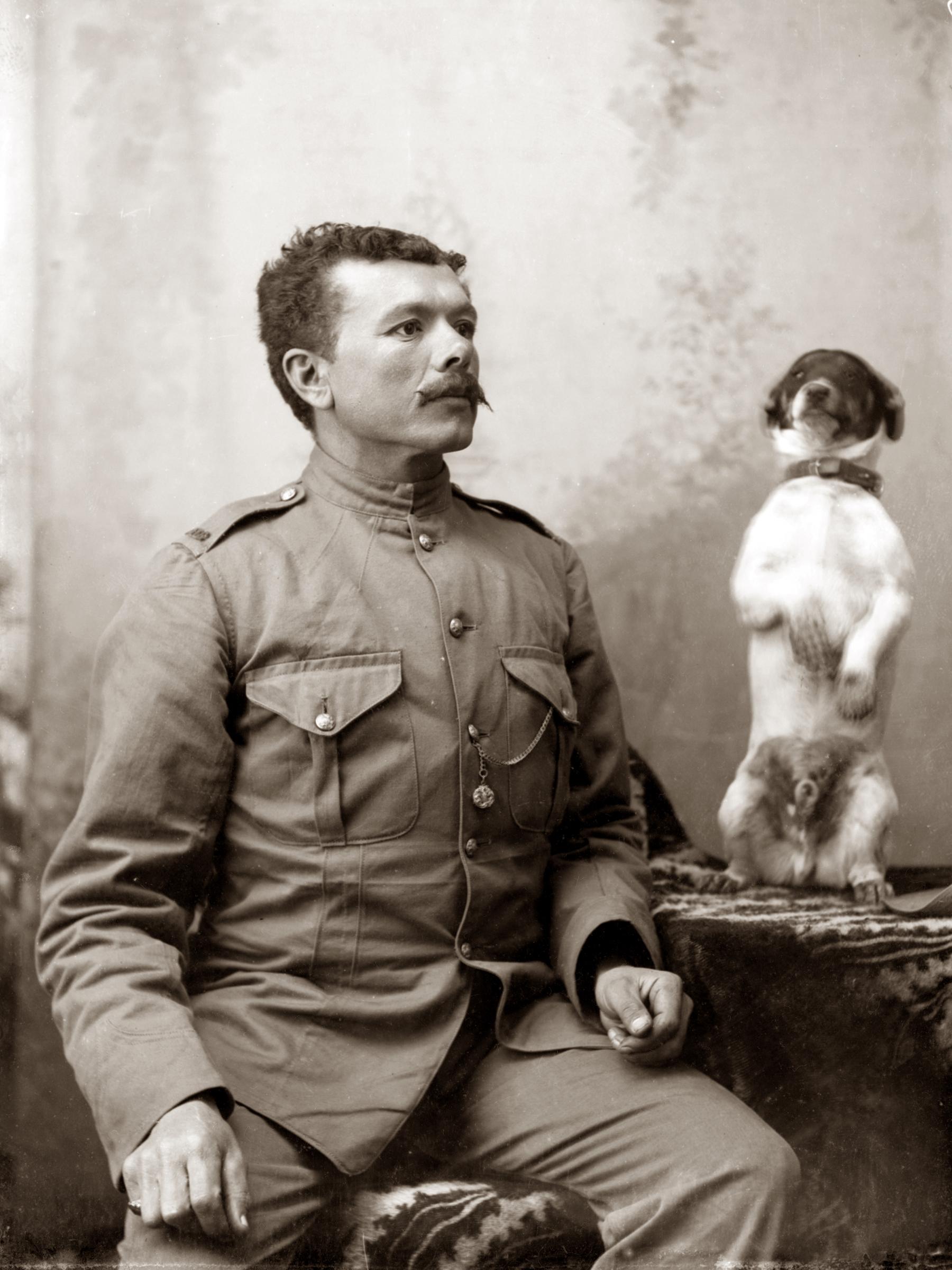 Who is the most obedient of the two? The officer’s pose also comes across as obedient and disciplined. Image from original glass negative – Photographer probably John Scholtz based in Aberdeen in the Karoo (Circa 1905)

Old photograph - child sitting on a dog via Carol Hardijzer.jpg 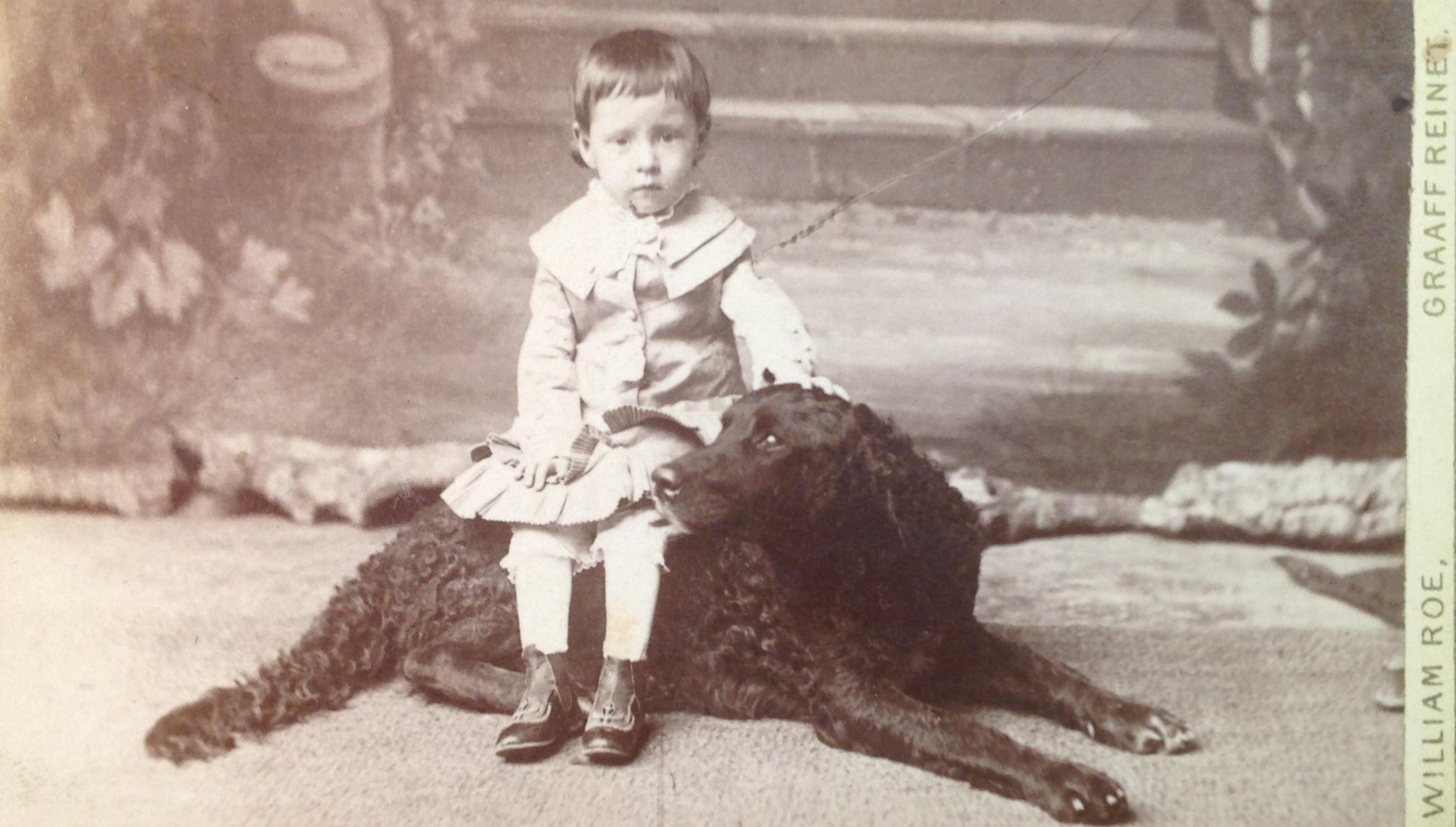 The chair in the studio is too high. Why not sit on the dog? Carte de Visite format photograph taken by William Roe - Graaff Reinet’s best known photographer during that era. Circa 1880

Some photographs, especially those involving children, may provide for some spontaneous moments being captured. Often the parent was not meant to be included in the final image, yet were so engrossed in getting their child to pose correctly, or safely, that the photographer could not edited them out of the final image.

Mom sneaking into the photograph via Carol Hardijzer.jpg 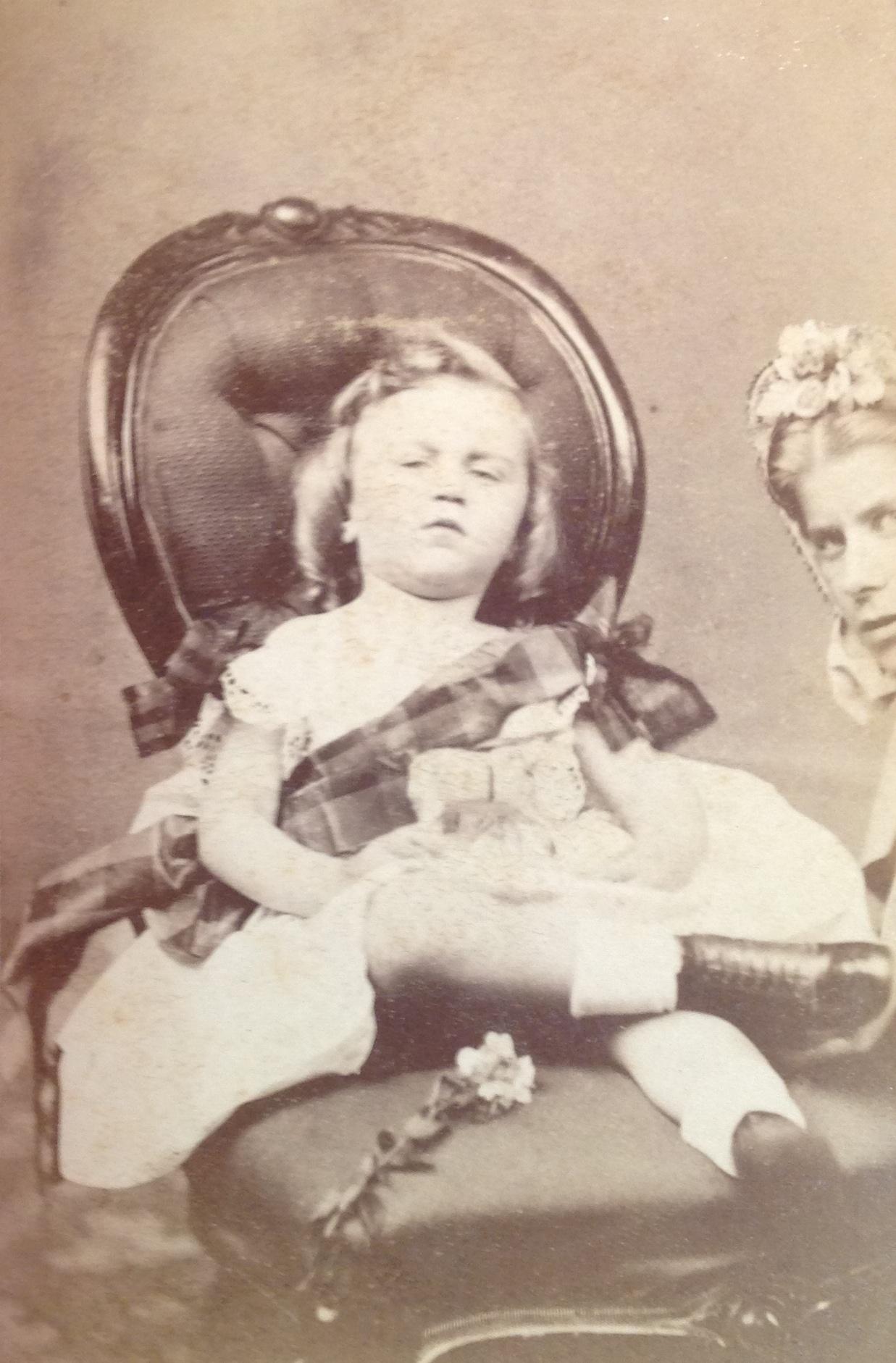 Much effort has gone into getting this little girl to pose. No, it is not a girl – it is William. Legs folded, arms positioned, flower on chair and banner around shoulder - mom simply had to be around to ensure that William “plays” along. Mom was clearly not meant to be in the picture and the photographer did not want to crop too much. Circa 1866

Helping hand to keep child on the pedestal via Carol Hardijzer.jpg 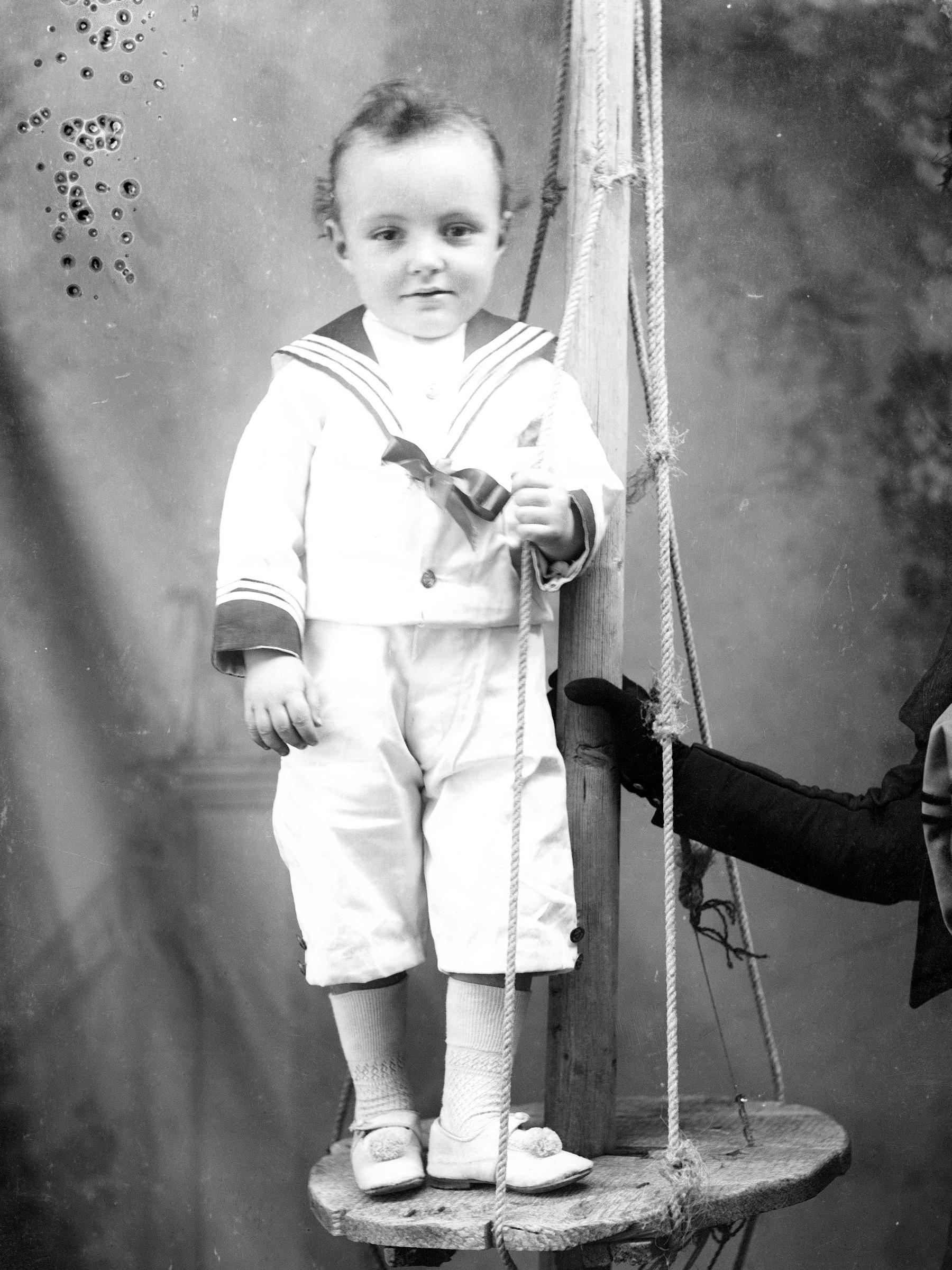 Mom has to ensure that the little one does not come off the pedestal – Image from original glass negative - Photographer John Scholtz based in Aberdeen, Karoo. Circa 1905

The majority of photographs produced of children are simply adorable.

Old photo of baby with a hat via Carol Hardijzer.jpg 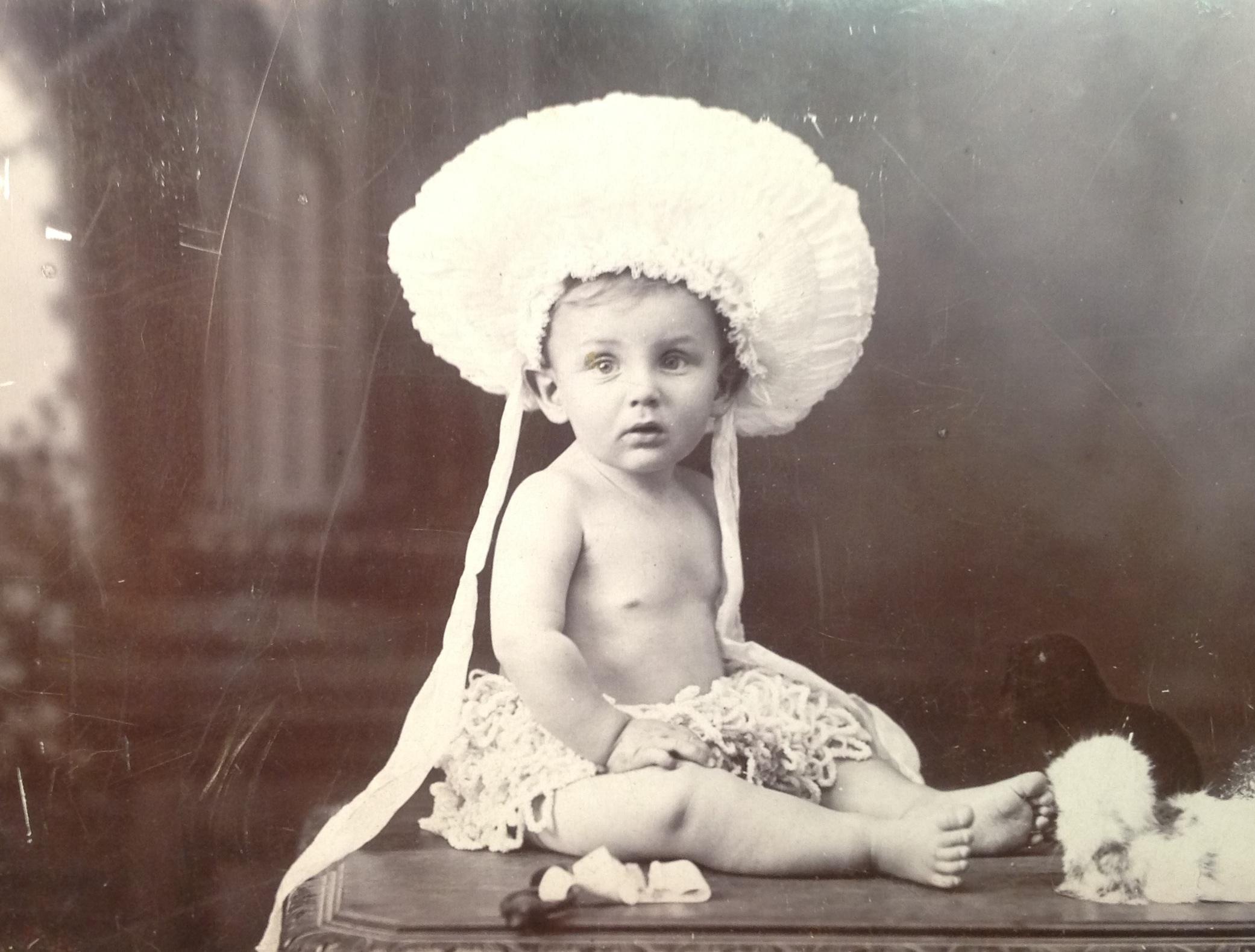 The “thing” around my waist – I can live with it, but the hat! – come on mom. Although there is some humor in the photograph, it is also a sad image. Little Warwick Edward Cockeull was born on 20 March 1905 and passed away 31 January 1906. Cabinet Card format photo by Cape Town based G. May

Young children dressed up as a couple via Carol Hardijzer.jpg 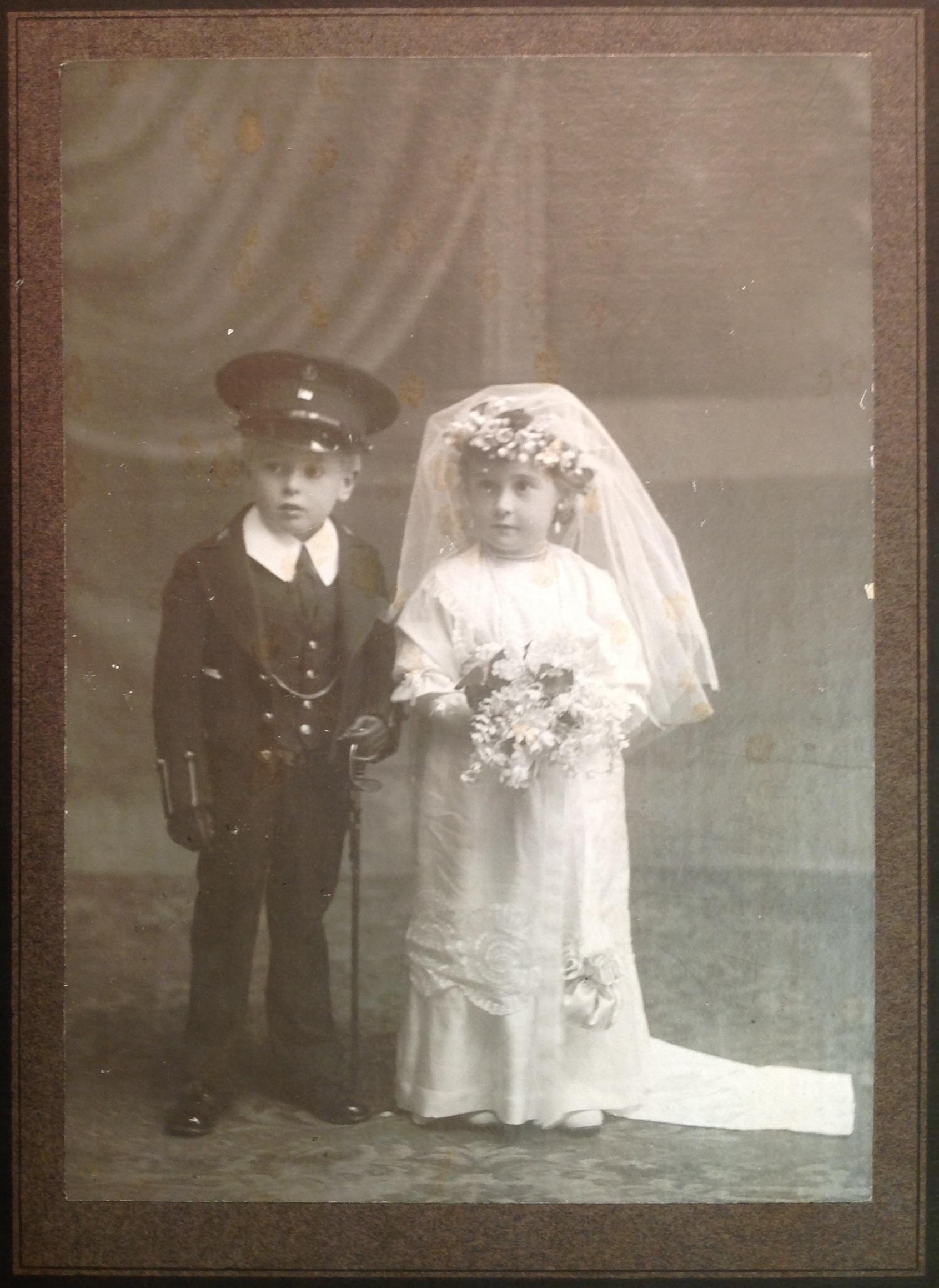 Images of actors or circus acrobats of the late 1800’s and early 1900’s also provide for an interesting perspective. A separate article will cover this aspect in the near future.