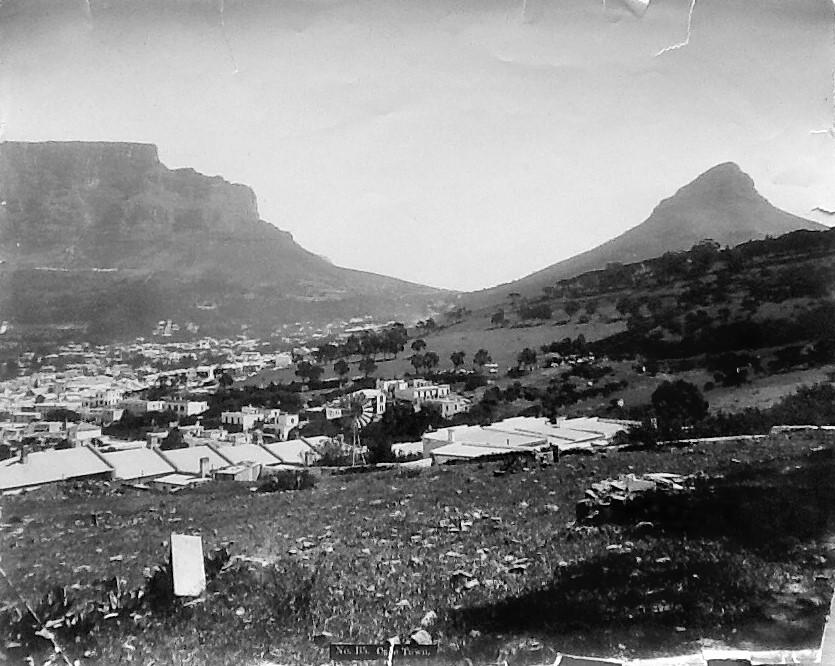 I was recently given four photographs of early 20th century Cape Town. They are all in sepia brown shades. The dimensions are 8.5 x 11.30 inches. The edges of the photos are in poor condition but the main scenes are clearly visible. I would love to date these photographs.

They are clearly from the photographic studio of TP Ravenscroft and the one of Sea Point has a stamp on the reverse TD Ravenscroft. 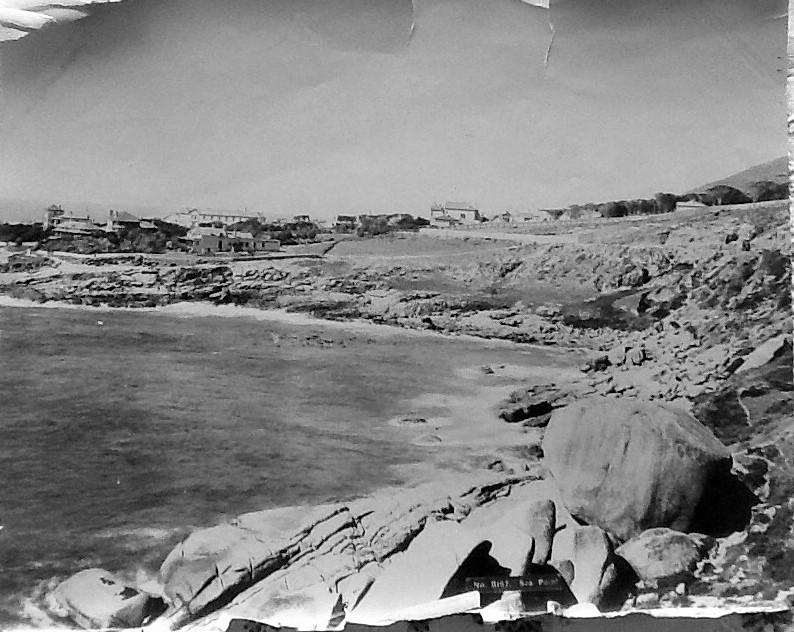 Thomas Daniel Ravenscroft was clearly an extraordinary man. He was an early photographer in the Cape. His dates were 1851 or 2 to 1948 which made him the "world's oldest working professional photographer" during his long life. In the latter part of his life  (from the 1920s or 1930s, he lived in Hermanus or as it was called then Hermanuspietersfontein and was well known as a photographer of the town and he also did a photographic study of Stanford. Many of Ravenscroft's photographs are to be found in the De Wets Huis Photo Museum in Hermanus.

Based on internet probing, his grandfather, George was in a British Army Garrison guarding Napoleon on Saint Helena.  When the commission ended in the early 1830s, the family decided to settle in Swellendam. Ravenscroft was established as a photographer in Cape Town during the 1890s. Apparently he lived in Robertson and then in Cape Town in Claremont and had a studio in Rondebosch.  T D Ravenscroft married Elizabeth Magdalena Viljoen of Swellendam, so there seems to have been a Swellendam and a Malmesbury connection. There were 12 children born to that marriage. 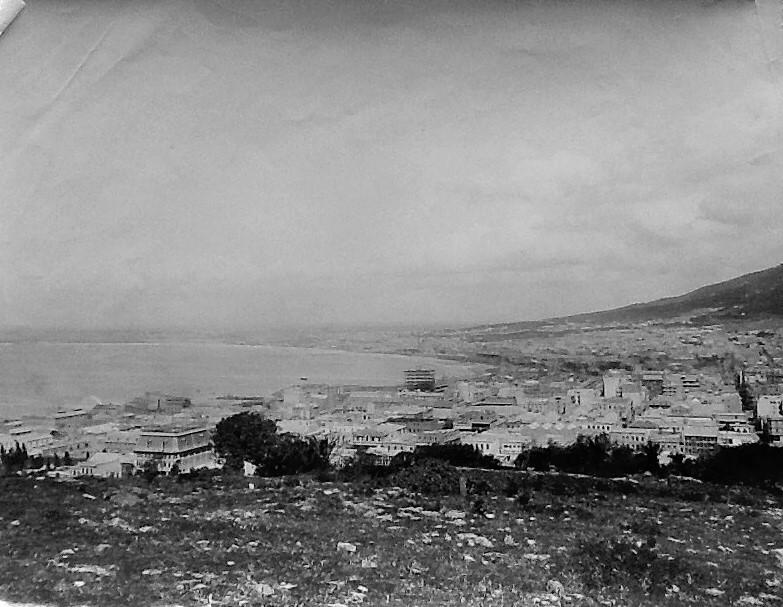 He photographed Rhodes and was commissioned by the Cape Government to travel across South Africa photographing various towns circa 1900. He also seems to have been commissioned by the Cape Railways to take pictures of trains and stations. However it may be that there was only one commission, ie to photograph the 100 towns served by the Cape Government Railways. Ravenscroft had a Rondebosch studio and a mobile photographic cart. I found a reference and photo online to his photograph of Bulawayo in 1900. I also now wonder if the early photographs I encountered of Prince Albert (and donated to the Prince Albert museum ) in 2016 were not Ravenscroft photographs, although the museum thought they were older. It was his custom to photograph the prominent buildings in a town (e.g. the town hall, the magistrates court, the police station, churches, schools, the Main Street) and then also to take panoramic views of the whole town from a scenic hillside site.

There is an interesting article by Felicity Jarvis published in 2016 (www.hermanus-history-society.co.za). Jarvis describes TD Ravenscroft as a "master of perfect infinity focus" who was technically skilled and had an eye for composition. The four photographs I now own certainly show just this. His photographs of places and trees also capture mood and moment and are exceptionally atmospheric. Ravenscroft's Cape train and railway station photographs are also to be found but now the copyright is claimed by the person who owns a collection of railway photographs which includes the Ravenscroft photos, so can't be reproduced. This practice of claiming copyright of photographs taken by a photographer who lived and worked more than a century ago, because you now have a photographic collection, seems a little odd. 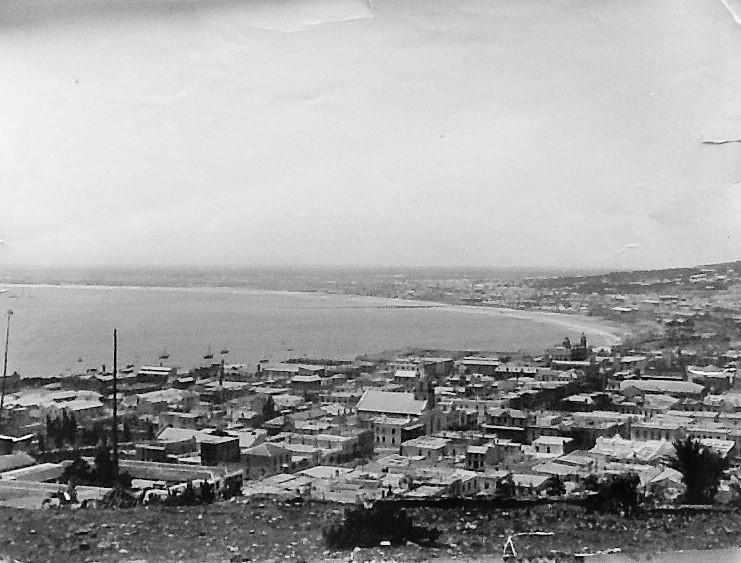 Another shot of the Bay (TP Ravenscroft)

There is only one brief and inaccurate reference to T D Ravenscroft in the book by A D Bensusan, Silver Images (1966). Hans Fransen in his Old Towns and Villages of the Cape (2006), draws quite heavily from the Ravenscroft collection in the Cape Archives Repository for early photographs of Cape towns and comments, and states that the South African railways commissioned Ravenscroft to record towns and other scenes of the Cape. Note however the South African railways did not come into existence until after Union in 1910.  Fransen comments critically that Ravenscroft did not have the eye or patience for picturesque settings that Elliott had but that his photographs had documentary value and he took photographs from interesting vantage points to show the general lay out of towns. I think this misses the point about the mastery of long distance panoramic views.

I also noted from online sources that Vincent van Graan, a contemporary photographer has published a recent book Cape Town, "Then and Now" and has made use of Ravenscroft's photographs for the "Then" views, as well as the photographs of Arthur Elliott and Henry Smart. In fact through the ORM website one can purchase copies of these early Cape Town photographs of Ravenscroft and it seems of other early Cape photographers but now marketed and sold with an artist's fee by Van Graan at over R500 for each photograph.

I am sure Ravenscroft photographs of the Cape are still to be found as are his postcards. I am aware that he photographed Rhodes as mentioned above, but I have so far been unable to match photographer and sitter with confidence.

Early Cape photography is out of my range of subjects but I would like to learn more and indeed TD Ravenscroft and his photography are worthy of further research; one needs to establish dates as to when he worked where and who commissioned him to do what. I have found one Bulawayo photo from 1900, but did his photographic travels take him elsewhere beyond the Cape? Did Ravenscroft photograph Johannesburg in the early days? The sheer longevity of Ravenscroft and the thousands of photographs he took plus the geographic spread of his Cape photographs make him an under valued South African historical source. Often we appreciate the early photograph without knowing much about the photographer.

I am still left wondering who TP Ravenscroft was. Could he have been the son of TD Ravenscroft? Was he Thomas Phillip Ravenscroft and did he take over the Cape Town studio? [See comment below]

I would appreciate further information from Heritage Portal enthusiasts.