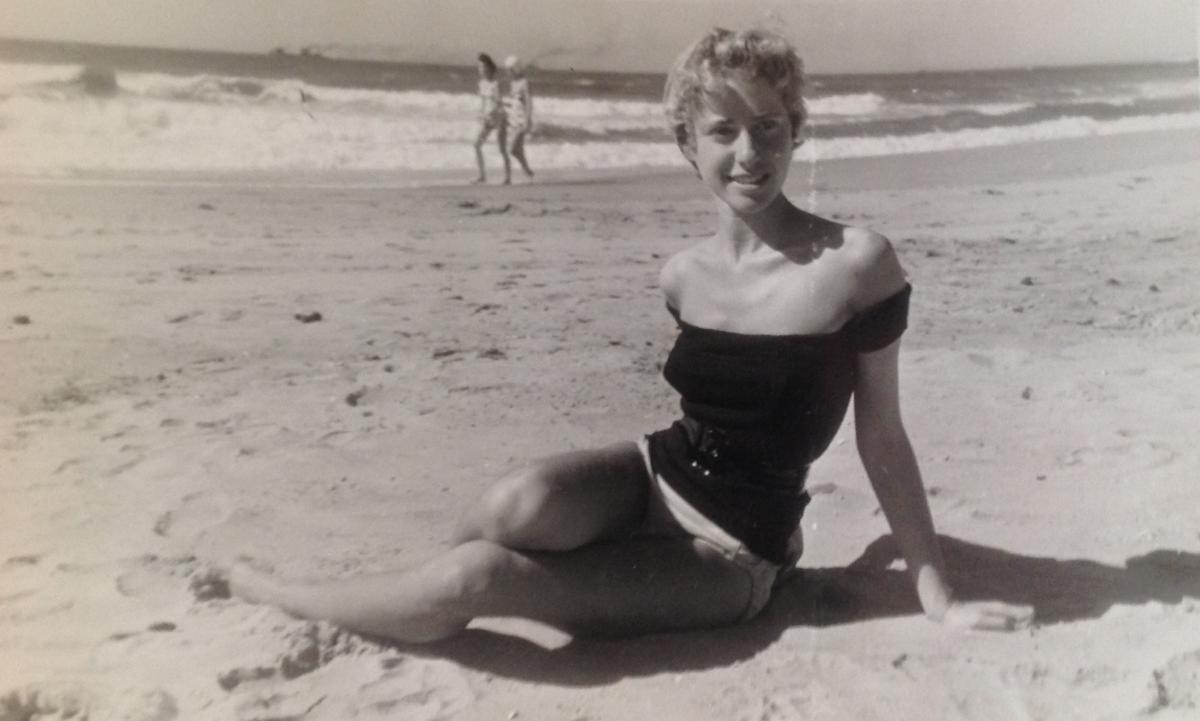 The author was surprised about the discussions elicited on the above article – It confirms that recent, or the more contemporary photographic history attracts more attention compared to older photographic history, in that many readers can still relate to the more recent era.

It has been suggested that when viewing photographic images, which form part of our own life narratives or era, an increase of up to 11% may occur in our general mood and happiness levels (actual research article not seen by author).

This makes sense - just looking at photographs taken on South African beaches between the 1930s and 1960s may bring some joy to the viewer. It creates a sense of euphoria. As an example, just look at the two images immediately below – Do they not elicit a positive response of some sort?

Young Fiona with her bucket and spade – Unknown location and photographer – Circa late 1950s via Carol Hardijzer.jpg 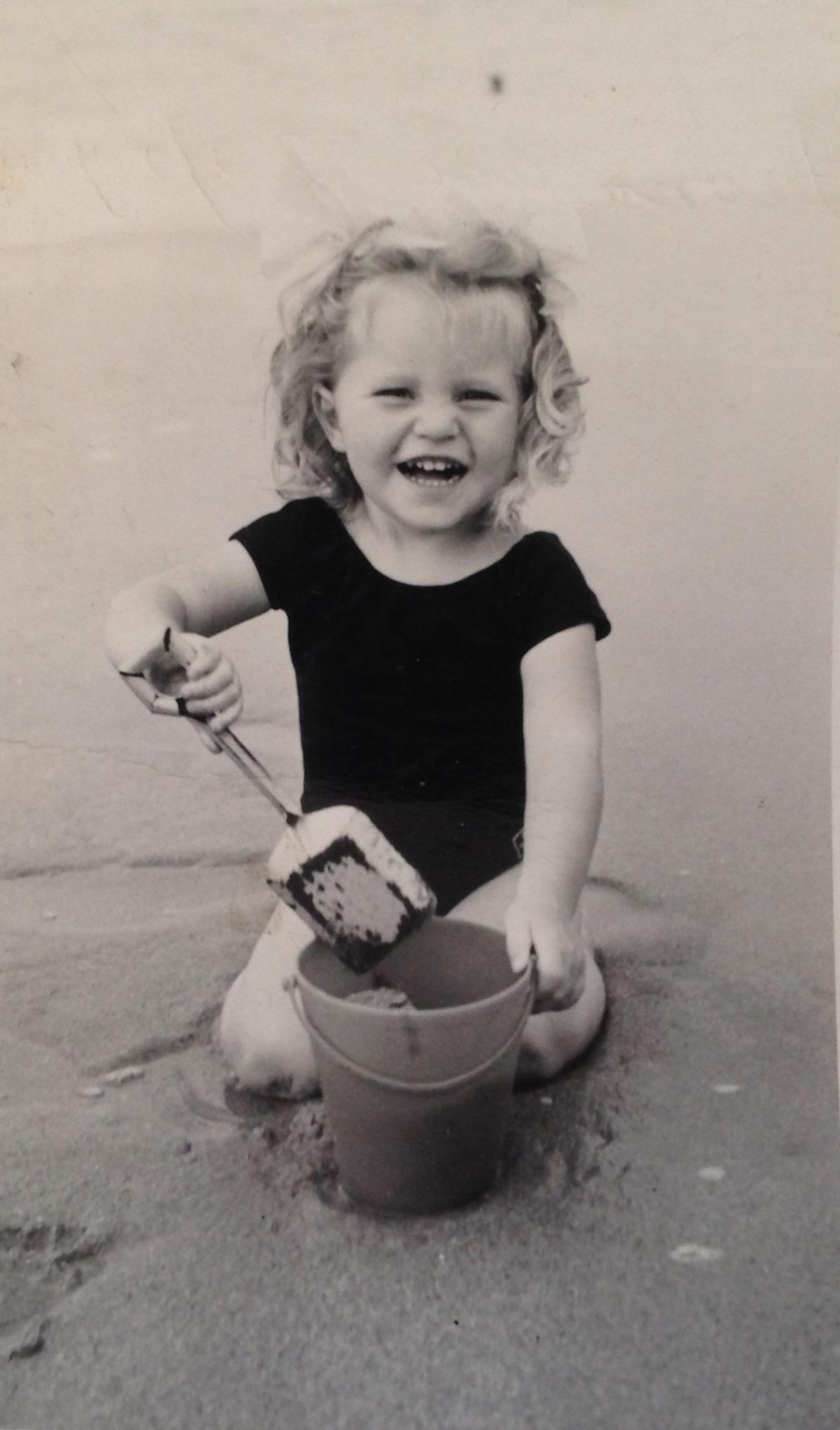 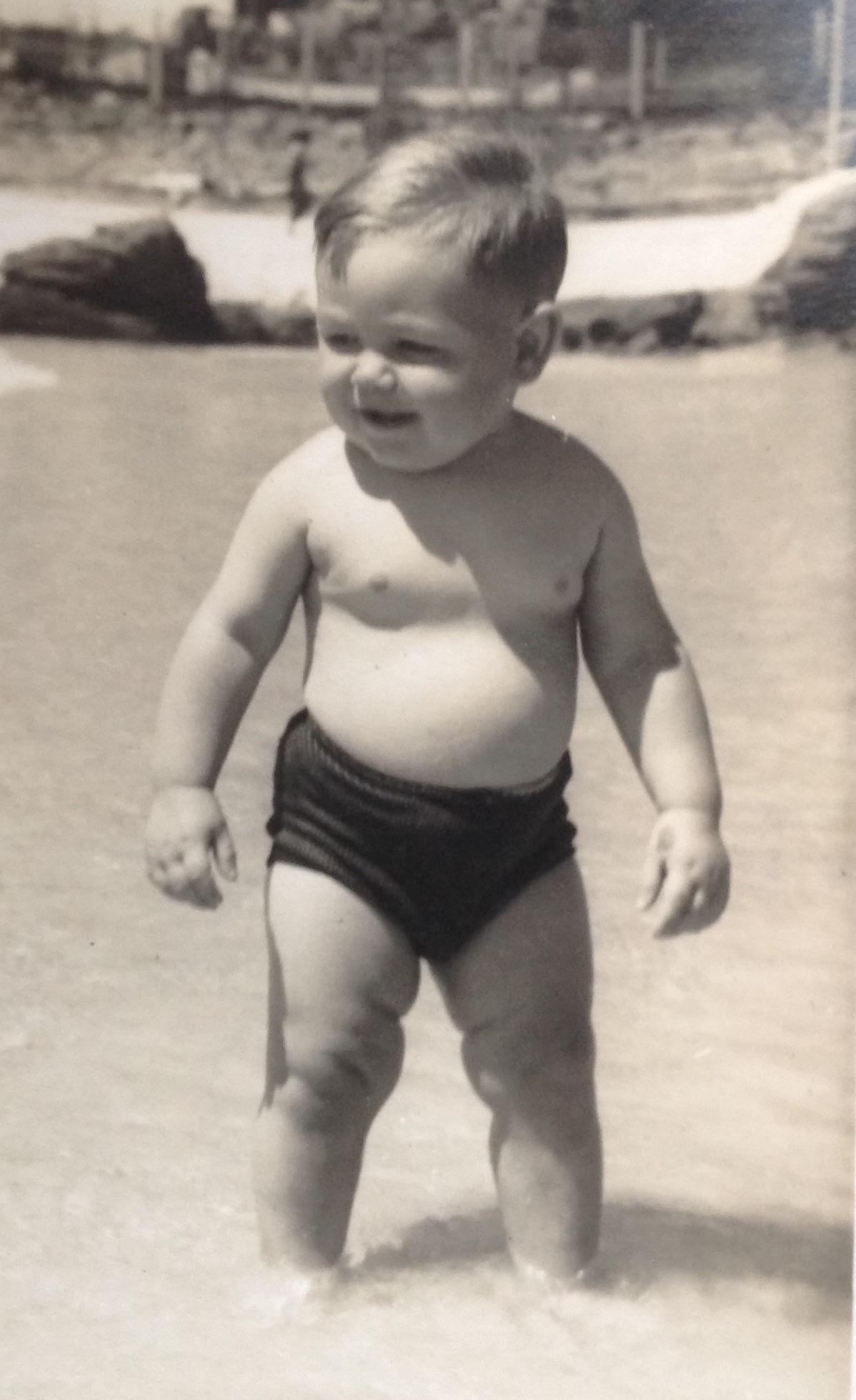 A two year old intrigued by the moving water. Is he not cute? Circa 1950s. Taken in Fish Hoek by Photo Peter. To date, this photographer has been identified as the photographer active the furthest south on the South African east coast.

Although the modern-day viewer of these images may not have the appropriate context, it still brings back some positive memories – fun summer holidays, sunshine, sand & suntan lotion (not too sure whether South Africans then were as aware of the dangers of the sun).

The appeal of the beach, for people from all walks of life, has remained constant. Back in the day, it would have been mainly the Vaalies (tourists from the old inland Transvaal province) who flocked to the warmer Indian Ocean beaches located on the South African east coast during the summer holidays.

These beach visits turned out to be proper family time out. Photographs captured at the time confirm this. There were no tablets or e-readers, no cell phones or other social media facilities. Whilst on the beach, people either chatted, read, built sand castles or simply lazed around. Some may even have participated in a variety of competitions, such as beauty parades held on the beaches. 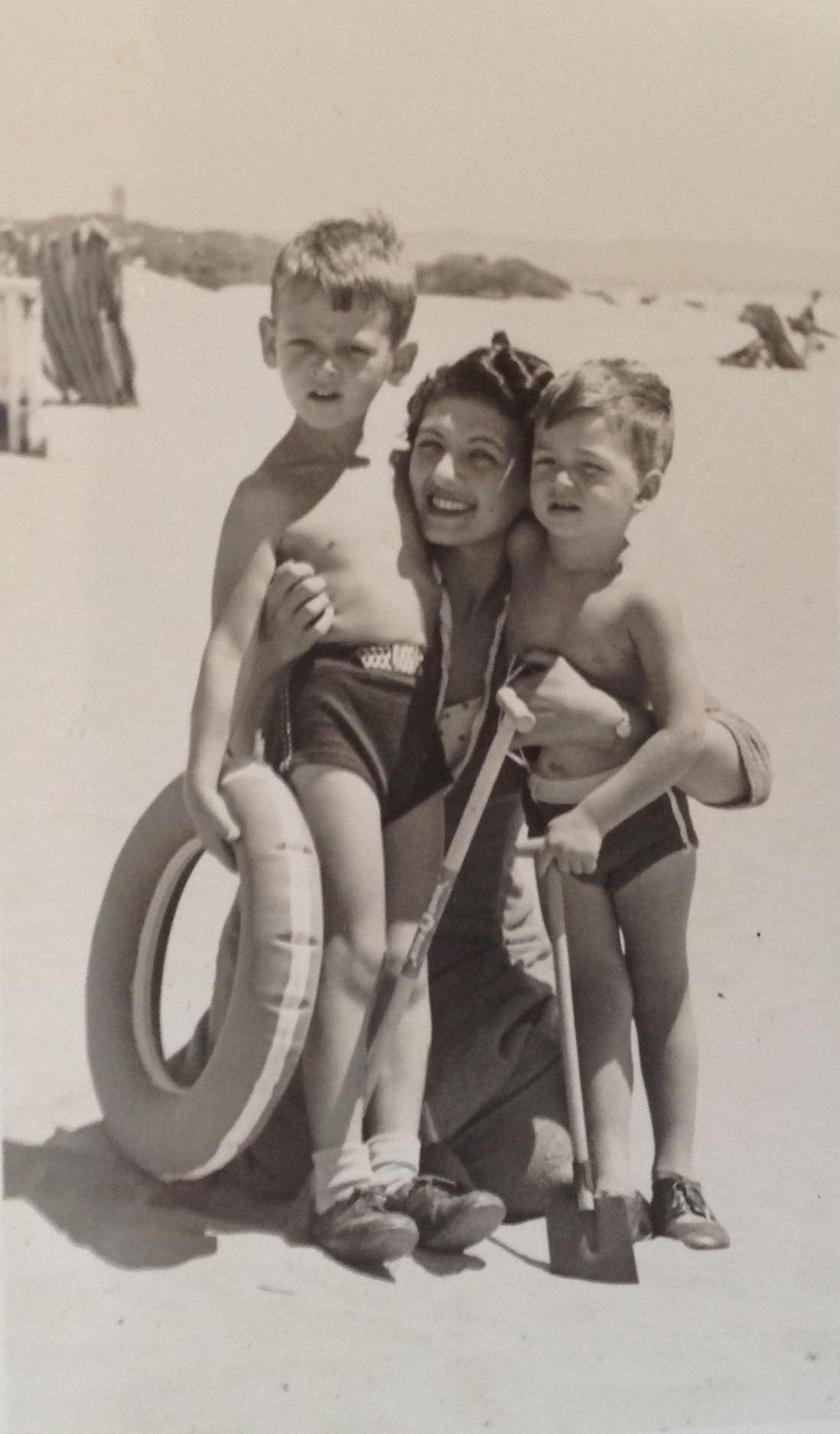 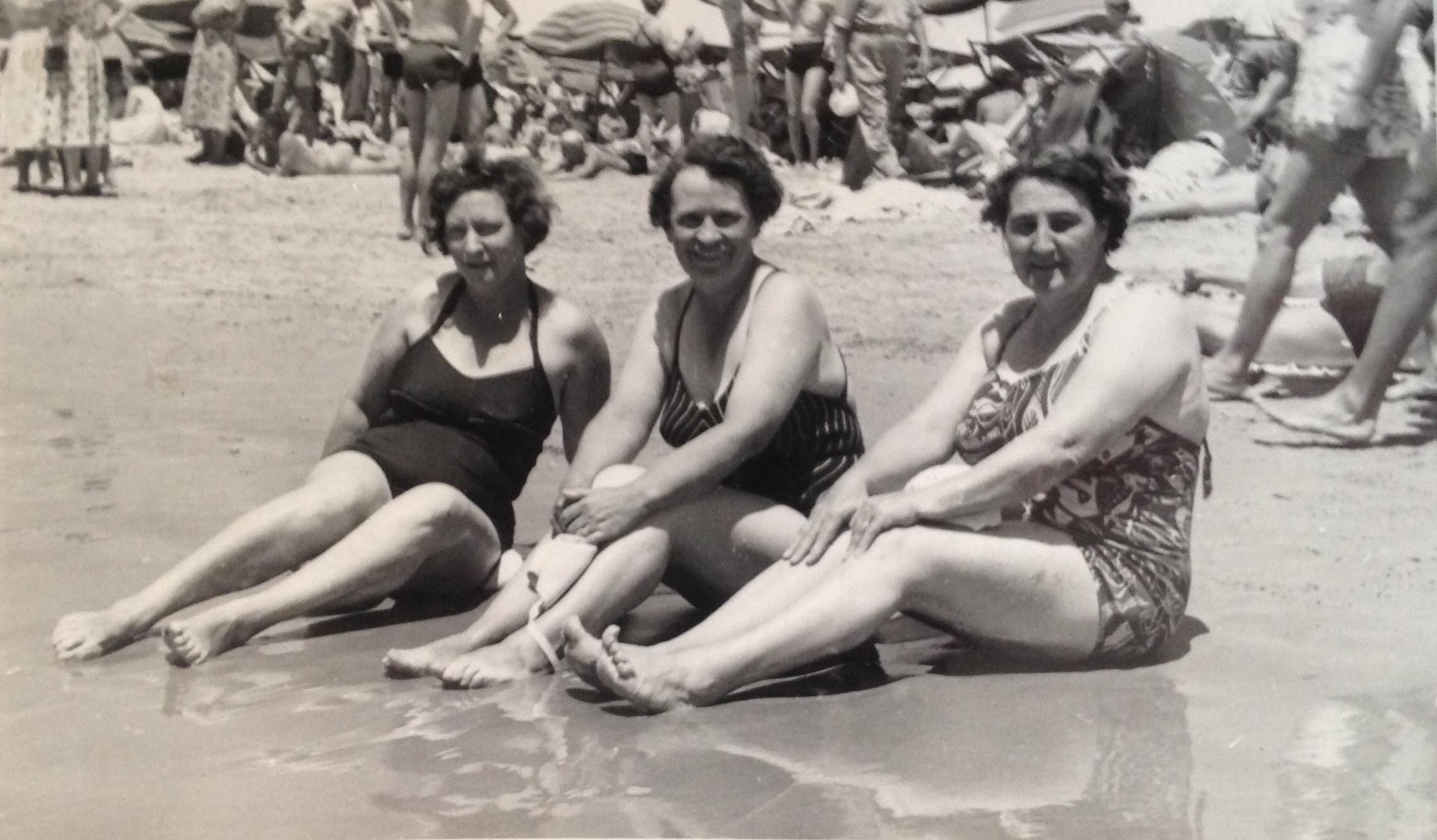 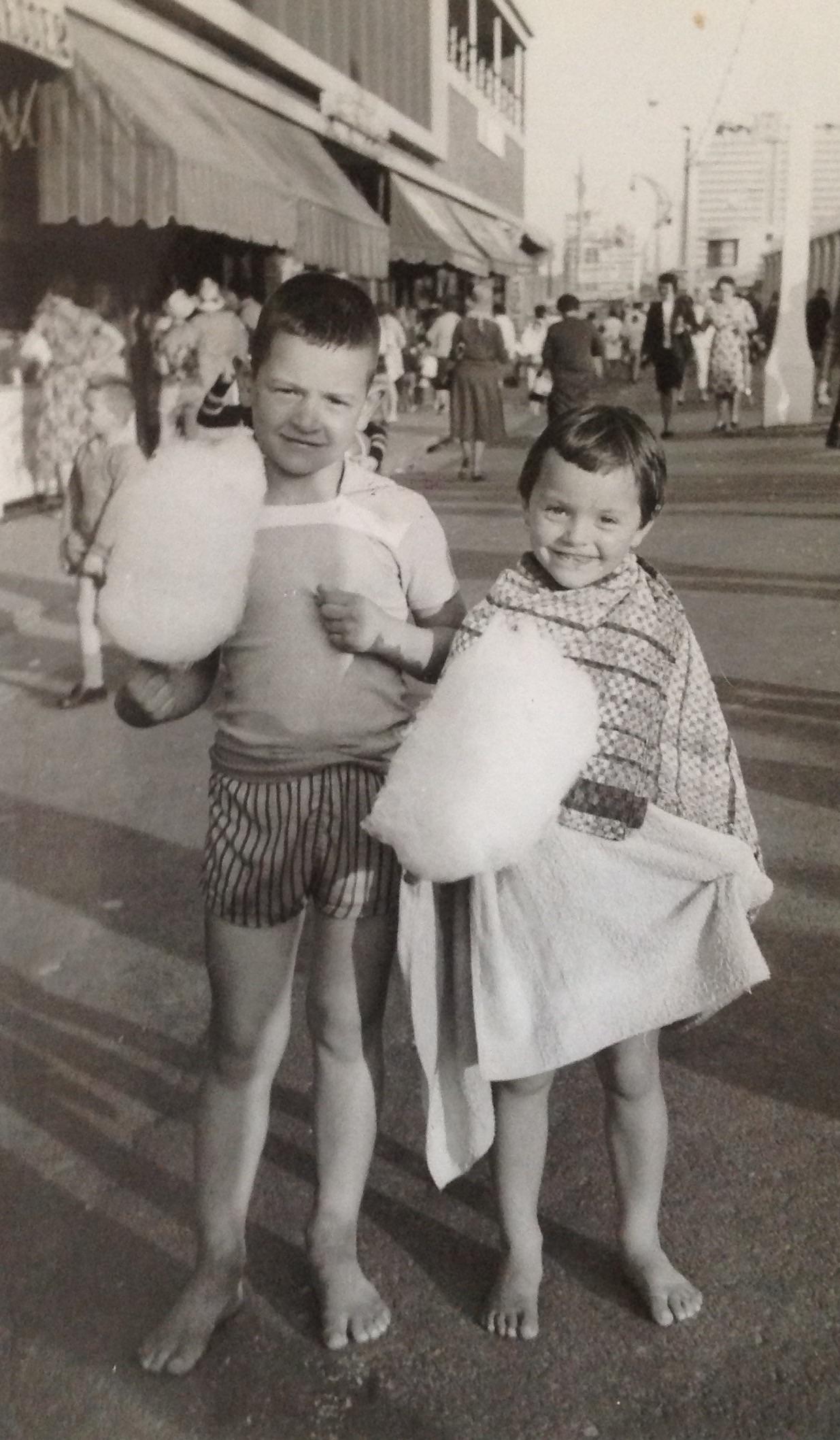 Jackie & Ricky Jordan on the Durban promenade – Circa early 1960s – Happy days studios – Durban South beach. This image confirms that beach photographers were not solely active on the beach. They would also have captured images of tourists with the Rickshas active in Durban for example

What are beach photographs?

Photographers continuously had to look at renewing themselves and come up with competitive and creative alternatives in generating additional income streams. Instead of waiting for the customer to come into their refined space, the photographic studio, photographers expanded to local streets and beaches. 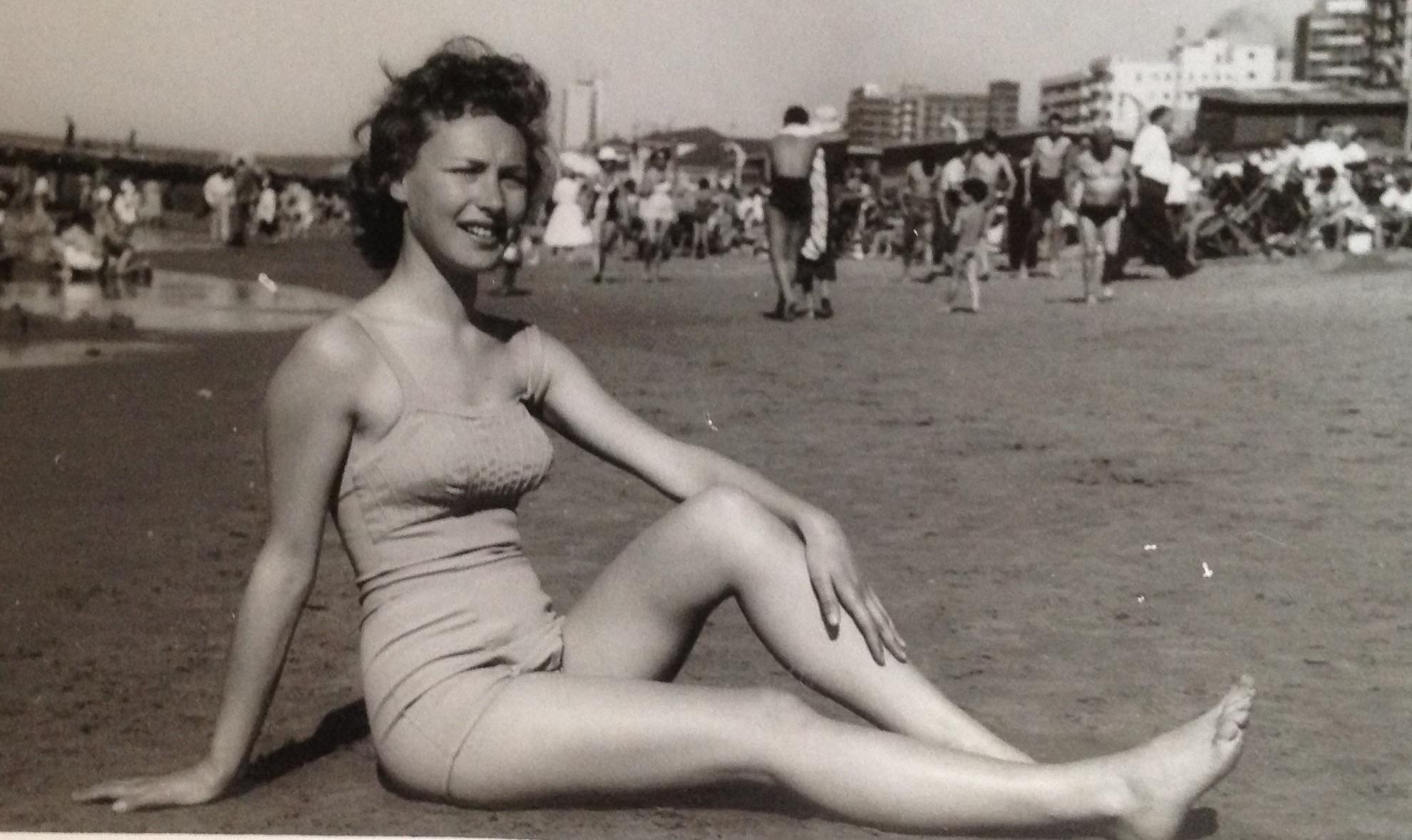 A photograph of unknown woman – Bosco photographers – Durban. Circa 1950s 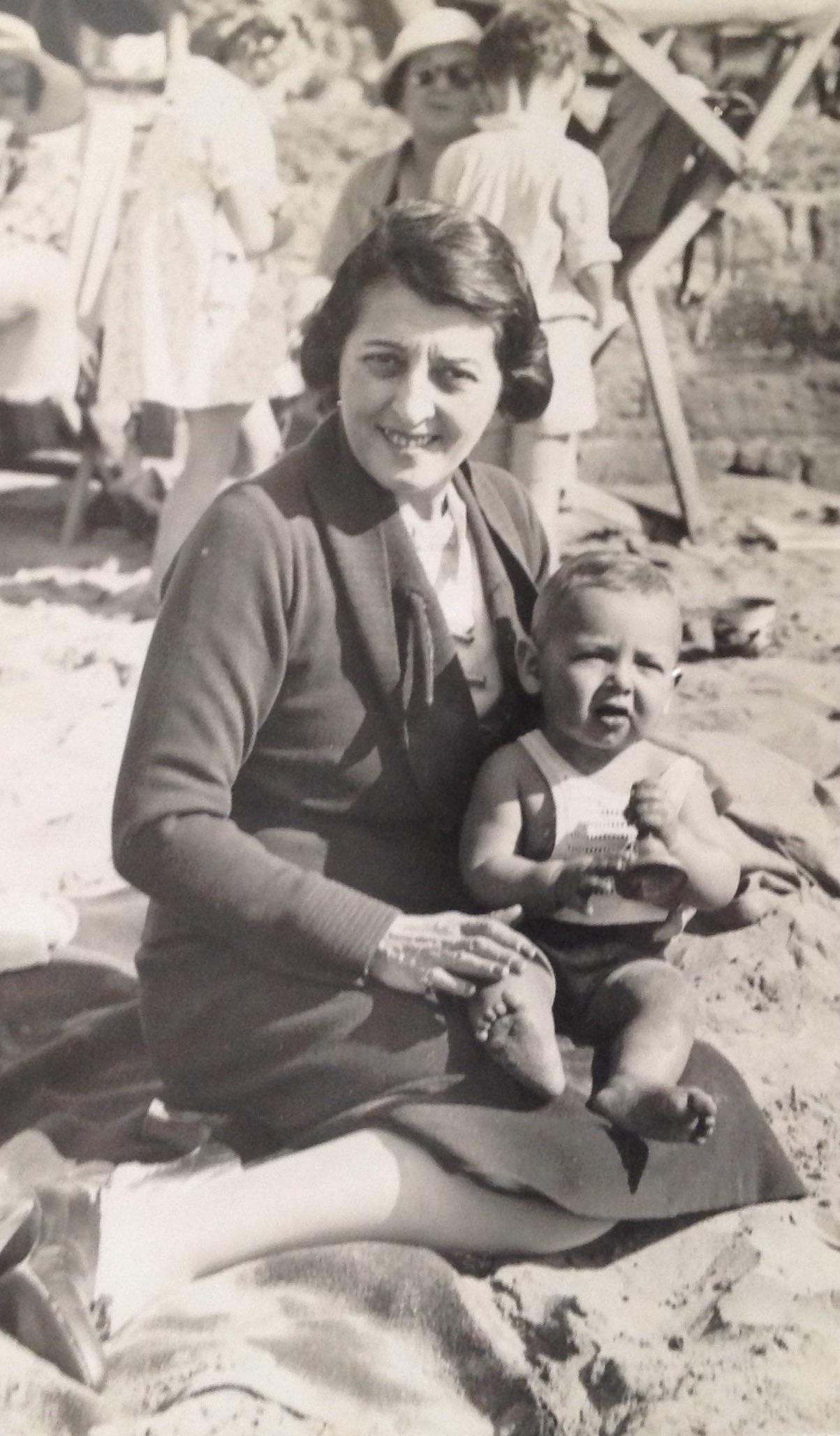 Unusual composition of an unknown couple on the beach – Circa 1950s via Carol Hardijzer.jpg 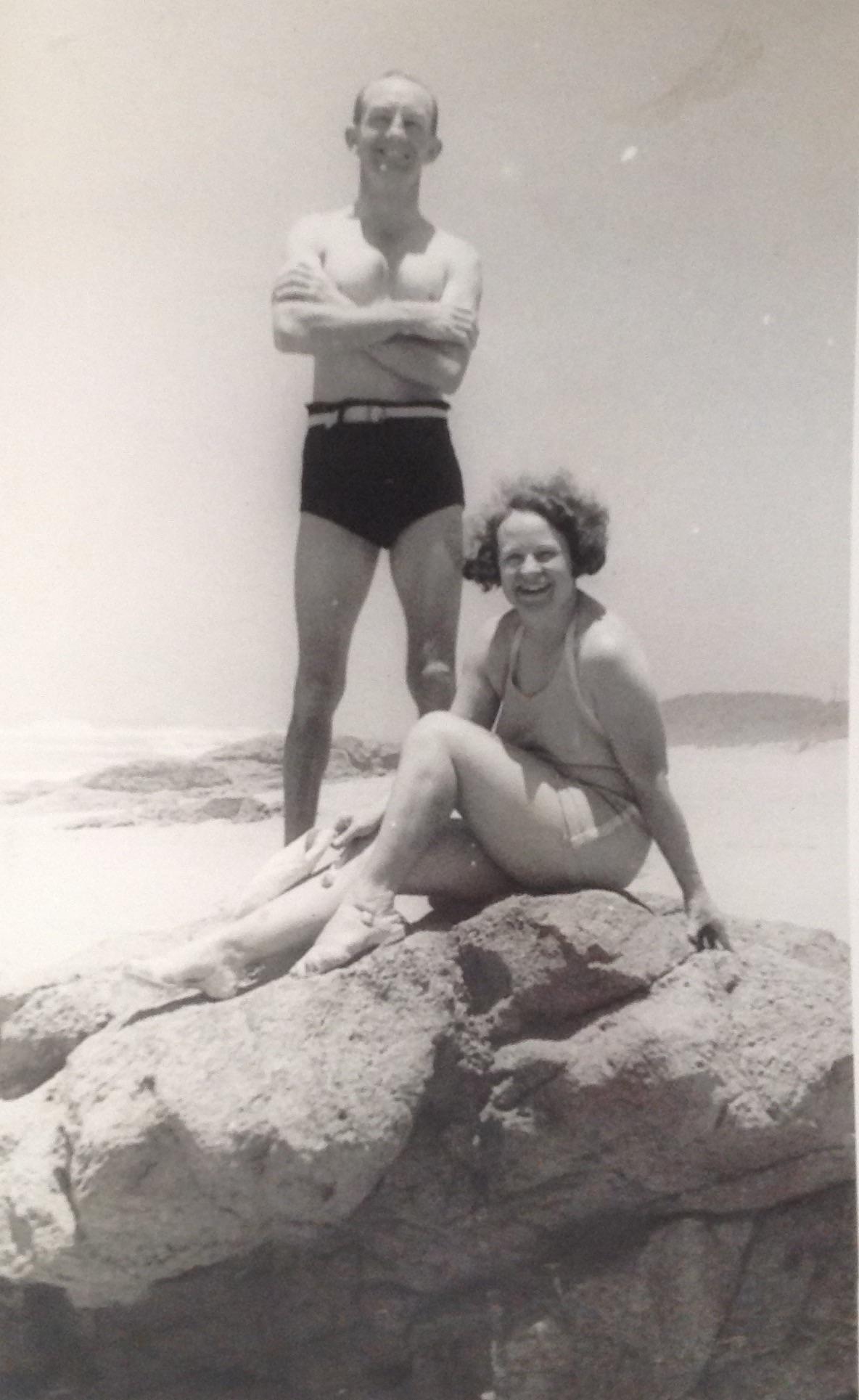 A rather unusual composition of an unknown couple – Circa 1950s

Grandmother and her granddaughter - Photograph by Happy Snaps at unknown locations via Carol Hardijzer.jpg 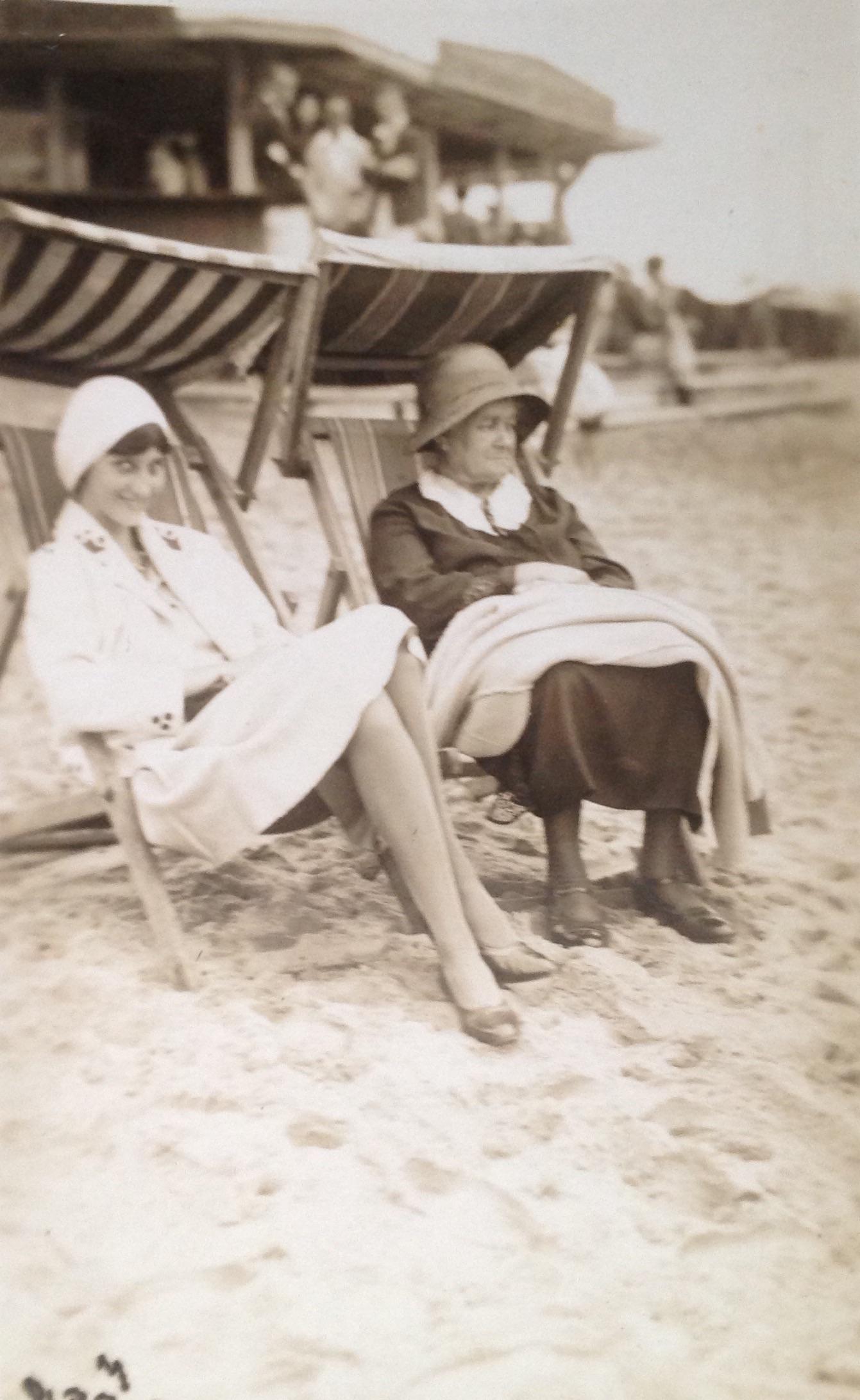 Grandmother and her granddaughter. Photograph by Happy Snaps at unknown locations. Note the naughty, or is it a shy, facial expression of the granddaughter?

Swimming touches on the social, religious and legal attitudes to swimming and swimwear.

It was not until the 18th century that swimwear was invented to hide the human body according to the morality of the times. In most cultures, swimming was either in the nude or the swimmer would merely strip to their underwear.

In the middle ages swimming was strongly discouraged, whilst in the 18th century swimming was regarded as of doubtful morality and had to be justified on health grounds. In the Victorian era swimwear mainly consisted of outer clothing of the time, which were cumbersome and even dangerous in the water, especially in the case of dress-style swimwear for women.

Since the early 20th century, swimming came to be regarded as a legitimate leisure activity or pastime and clothing made specifically for swimming became the norm. Despite early objections from moral campaigners, swimwear has become increasingly scanty and form-fitting.

By the 1930s men began to go without shirts for swimming and bare-chested male swimwear became the norm by the end of the 1940s.

Women's swimwear of the 1930s and 1940s incorporated increasing degrees of midriff exposure. Most women however still preferred to wear a one-piece swimsuit during the 1950s.

The original bikini was designed, not by a fashion designer, but by an engineer. French engineer Louis Réard introduced the modern bikini, modelled for the first time by Micheline Bernardini, during July 1946. The naming convention was derived from the Bikini Atoll, where post-war testing on the atomic bomb was taking place at the time.

The iconic itsy bitsy, teeny weeny, polka dot bikini would therefore only have been spotted on beaches worldwide post 1950s.

Images of South African women in their bikinis should also be floating around. The author recently obtained an image which had the following inscribed on the back: “Please do not show anybody - for your eyes only”. Whilst there is nothing untoward or revealing with this particular image, it confirms that people, especially woman, were not all at ease with photographs of them in their swimwear being in circulation.

Photograph by Palm Studio in Margate - 9 January 1953 via Carol Hardijzer.jpg 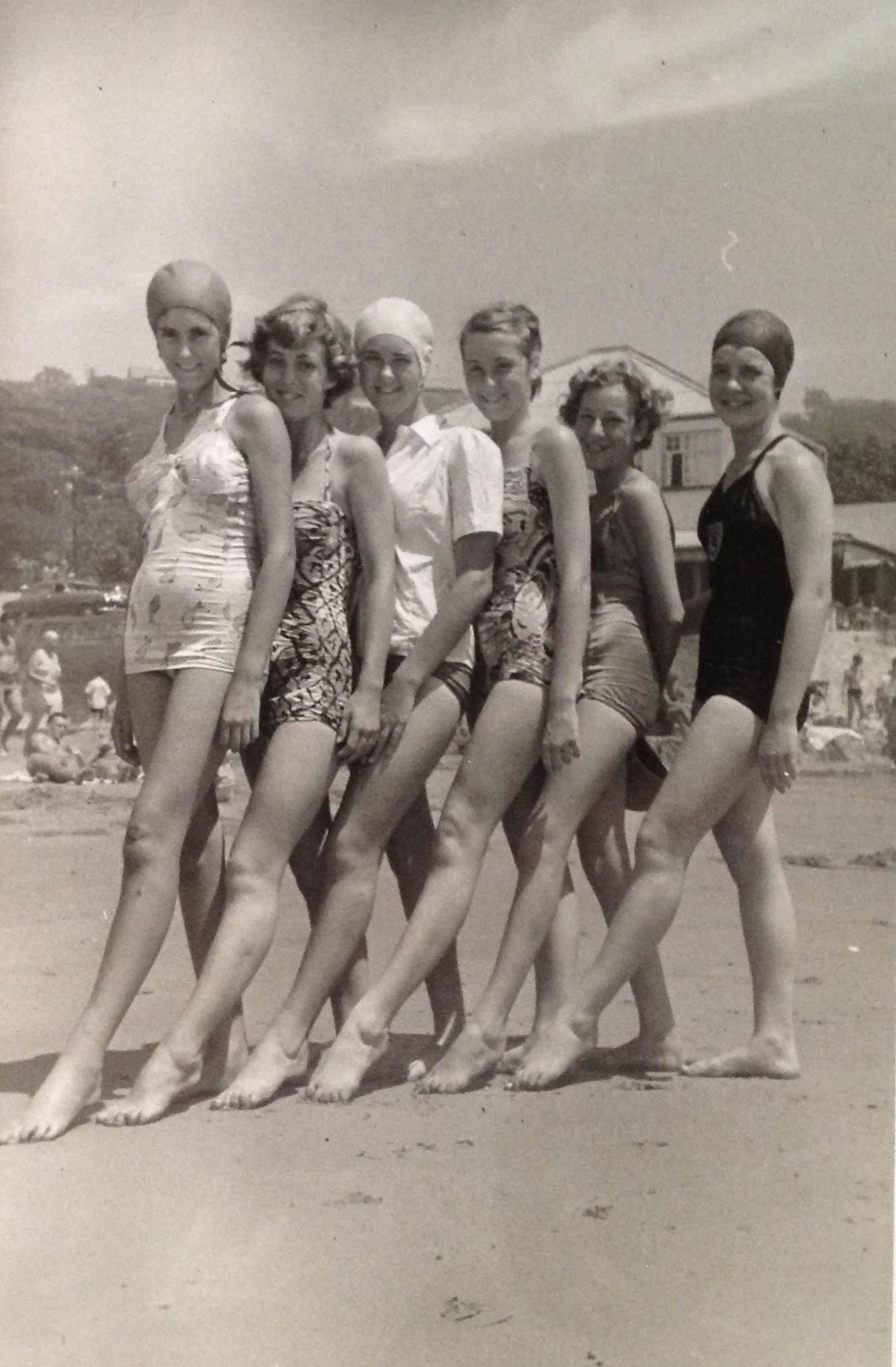 Photograph by Palm Studio in Margate. Image captured on 9 January 1953. From left Jennifer Murray, Minnie Durose, Eileen Liddle, Hilary Duncan, Diana Edwards & Jennifer Besterman. Today these six ladies would  be (or have been) around 80 years of age

Barrettis photograph of Rawin Margaret and Johnny taken at Durban during 1951 via Carol Hardijzer.jpg 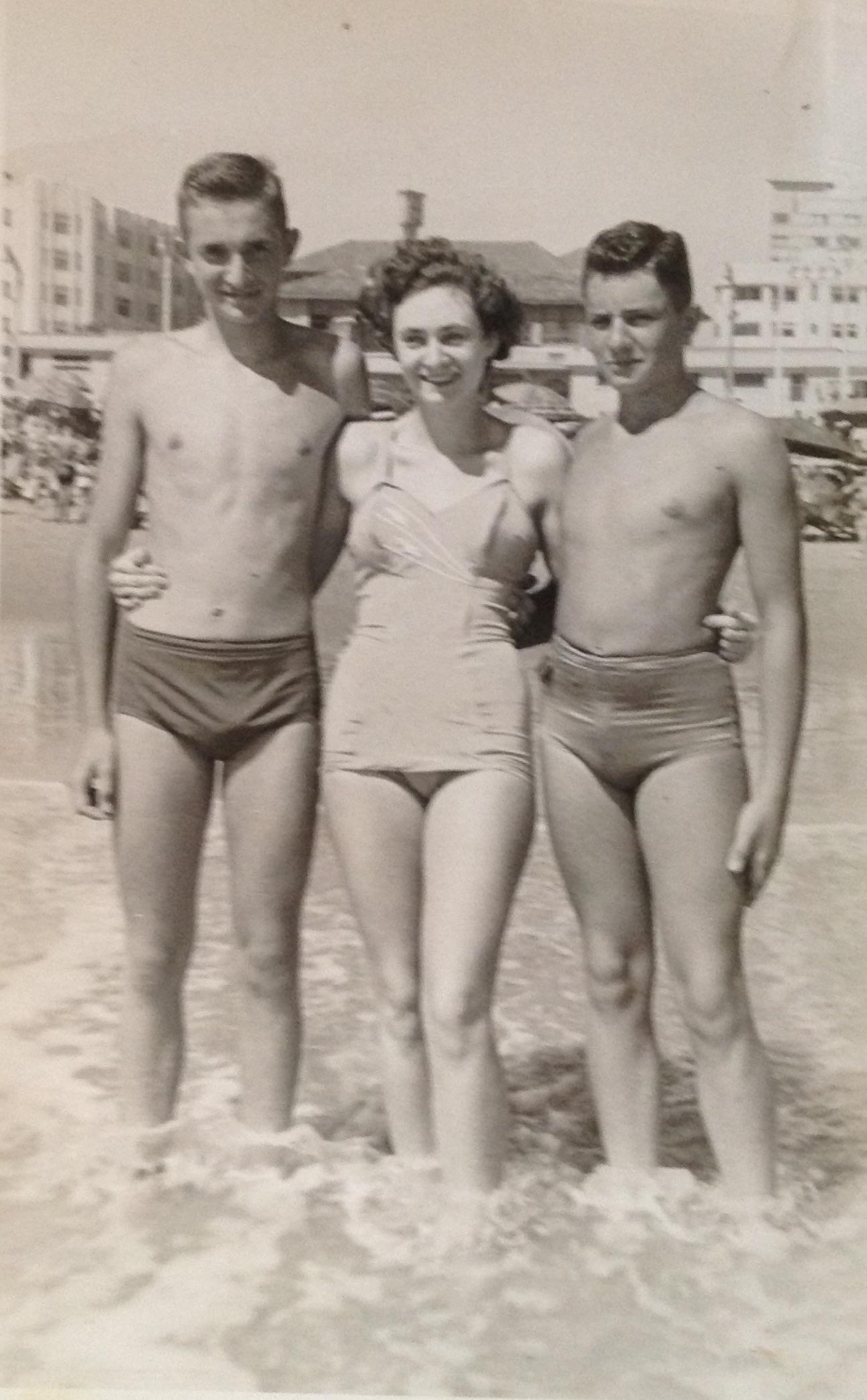 A Barretti’s photograph of Rawin, Margaret & Johnny, taken at Durban during 1951. The photographer stood in the water to capture this image 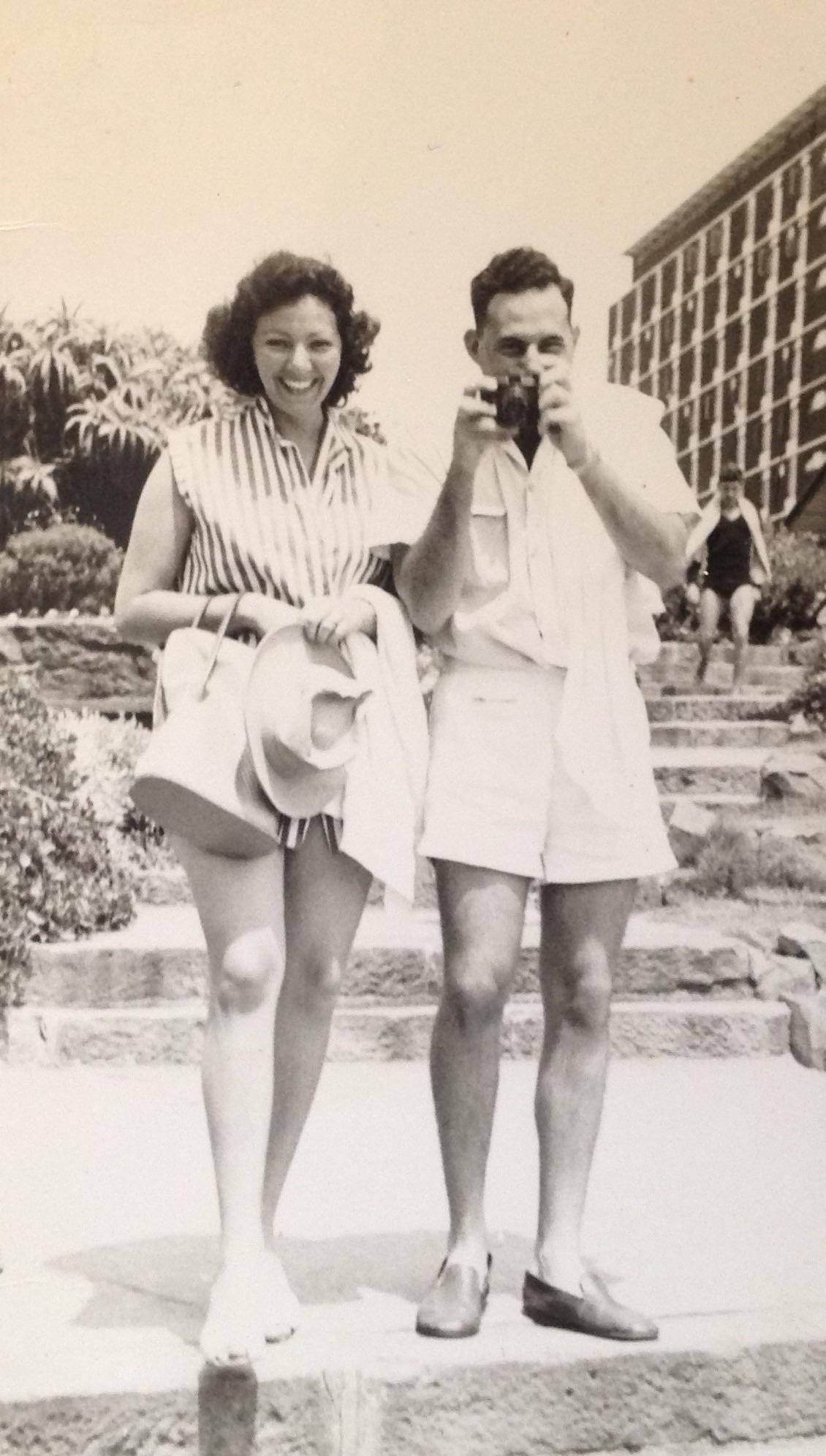 Only a small number of photographers captured their details on the back of the photographs once printed. To date, the author has identified the following beach photographers, active on South African beaches from Umhlanga Rocks (near Durban) in KwaZulu Natal to as far south as Fish Hoek (some 1300 kilometers apart) in the Western Cape.

Listed from north to south:

Considering the short list above, fewer photographers seem to have been active in the Eastern and Western Cape (further south on the east coast) compared to the KwaZulu Natal coastal towns. It is known that the ocean waters are warmer further north on the South African eastern coast, perhaps explaining the reason for higher beach tourism and photographer activity.

Future research is aimed at not only identifying and recording more beach photographers, but also determining whether photographers may have been active further north than Umhlanga (in Richards Bay for example) or further south of Fish Hoek (in Camps Bay and Cape Town beaches for example).

It is unlikely that beach photographers would have been active on the South African west coast due to the colder Atlantic ocean waters which would not have attracted beachgoers to the same extent as the South African eat coast resorts.

Pops and his wife perhaps – The Art Studio Scottburgh – Circa 1950s via Carol Hardijzer.jpg 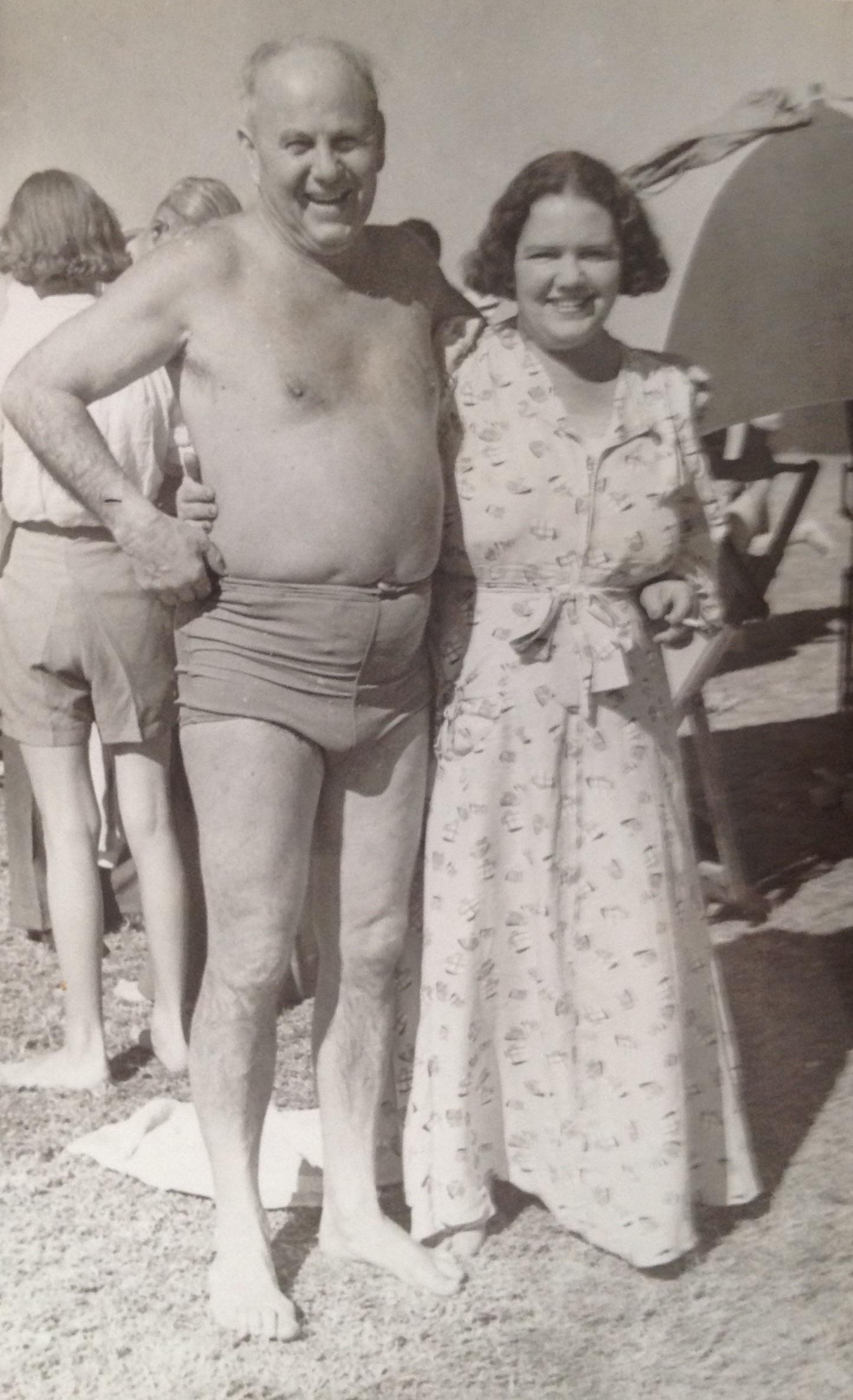 Pops and his wife? – The Art Studio Scottburgh – Circa 1950s

Mom and her two sons on the beach – Circa 1950s via Carol Hardijzer.jpg 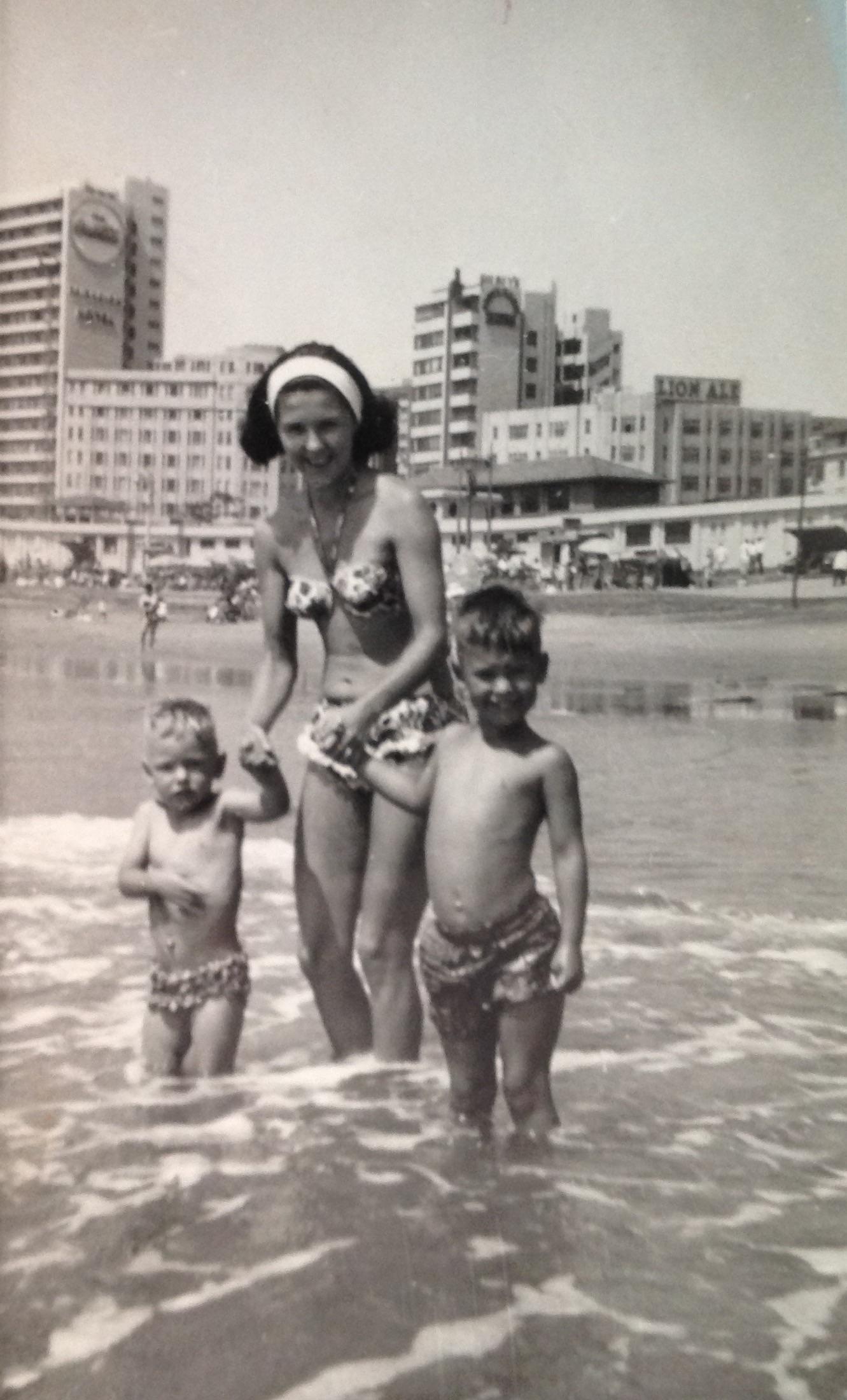 Mom and her two sons – Circa 1950s. The photographer stood in the water to capture this image. The youngest of the two does not seem happy. Some information can be derived from the buildings in the background. Could the mom’s bikini be described as a itsy bitsy, teeny weeny, polka dot bikini? 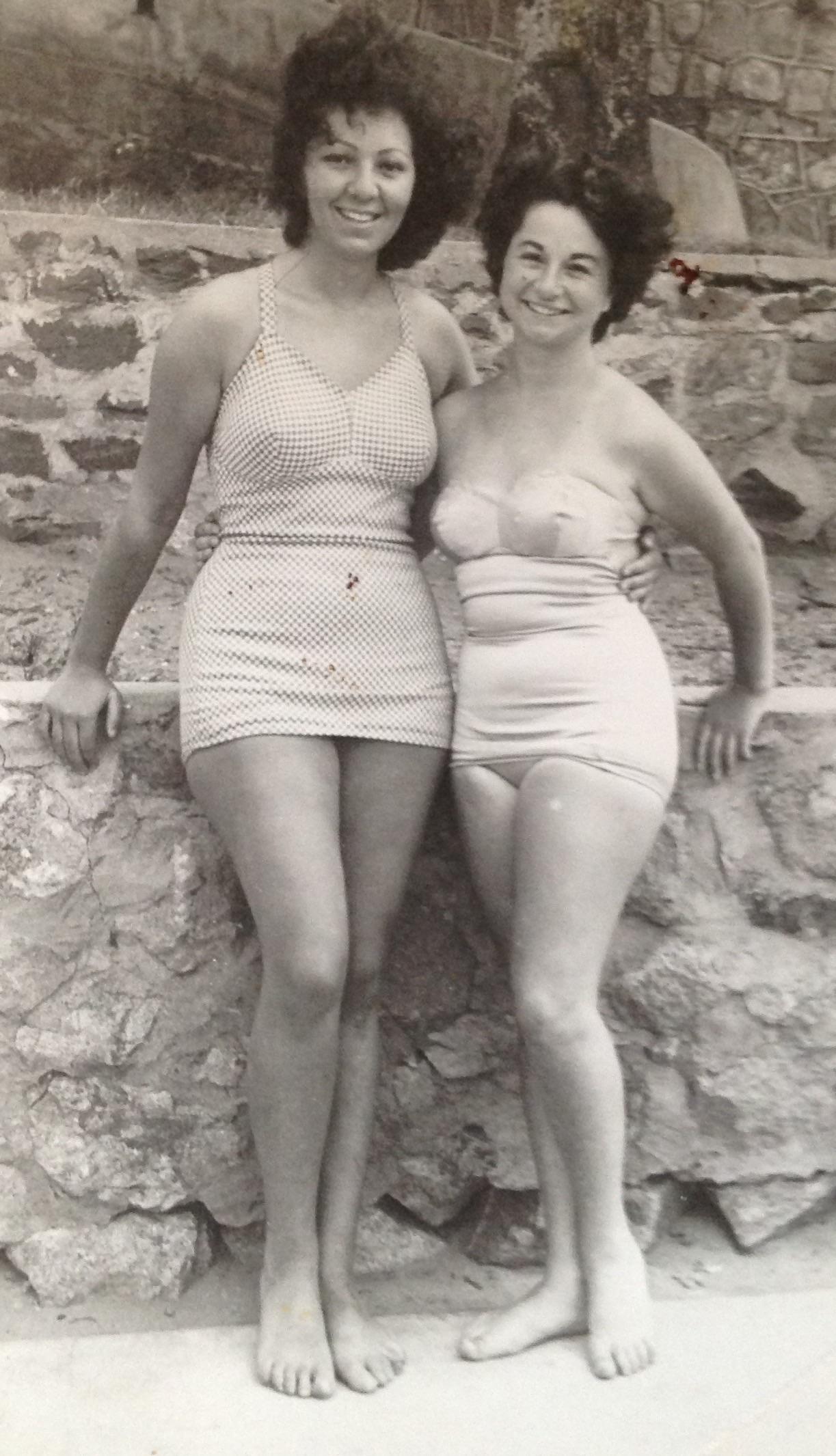 Today the photographs are of interest in that they provide some insight in terms of swimwear fashions, toys, social structures etc.

Of course, it was not only the professional photographer who was active on the beaches. Amateur photographers also had their cameras with them whilst on the beach. This is evidenced through the multitude of smaller format images that may still be found in family photo albums.

This article, and the images contained herein, confirm South Africa’s sad segregation history. At the time, other races were not allowed onto selected South African beaches for recreational purposes, an aspect that is clearly reflected in the images included in this article.

All images included in this article (but one), were purchased for between R1 and R5 at flea markets in Johannesburg & Cape Town. Each of these images conjures up the thought: “Where are they today – what path did life place them on?”

The photographs included in this article are proof that no matter how many years have passed by, people around the world still love to spend summers by the sea.

Readers are invited to the inform the author of any beach photographers not appearing in the list above.

Image of a family on the beach – Note the childs metal bucket – An item which is collectable today via Carol Hardijzer.jpg 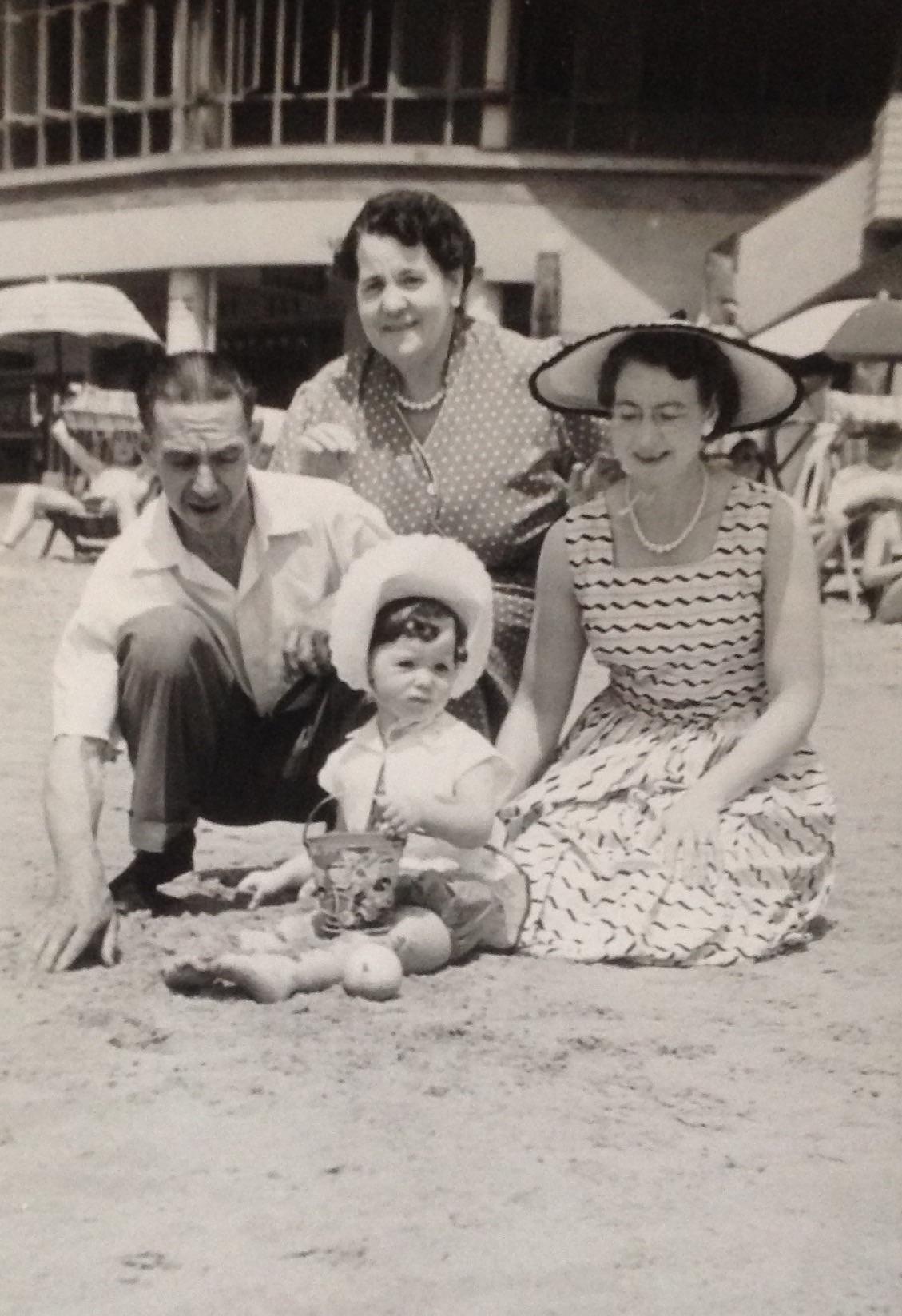 Image of a family on the beach – Note the child’s metal bucket – An item which is collectable today.

Photograph of young S Furze – Taken by Macs Studio in Amanzimtoti - Circa 1940s.jpg 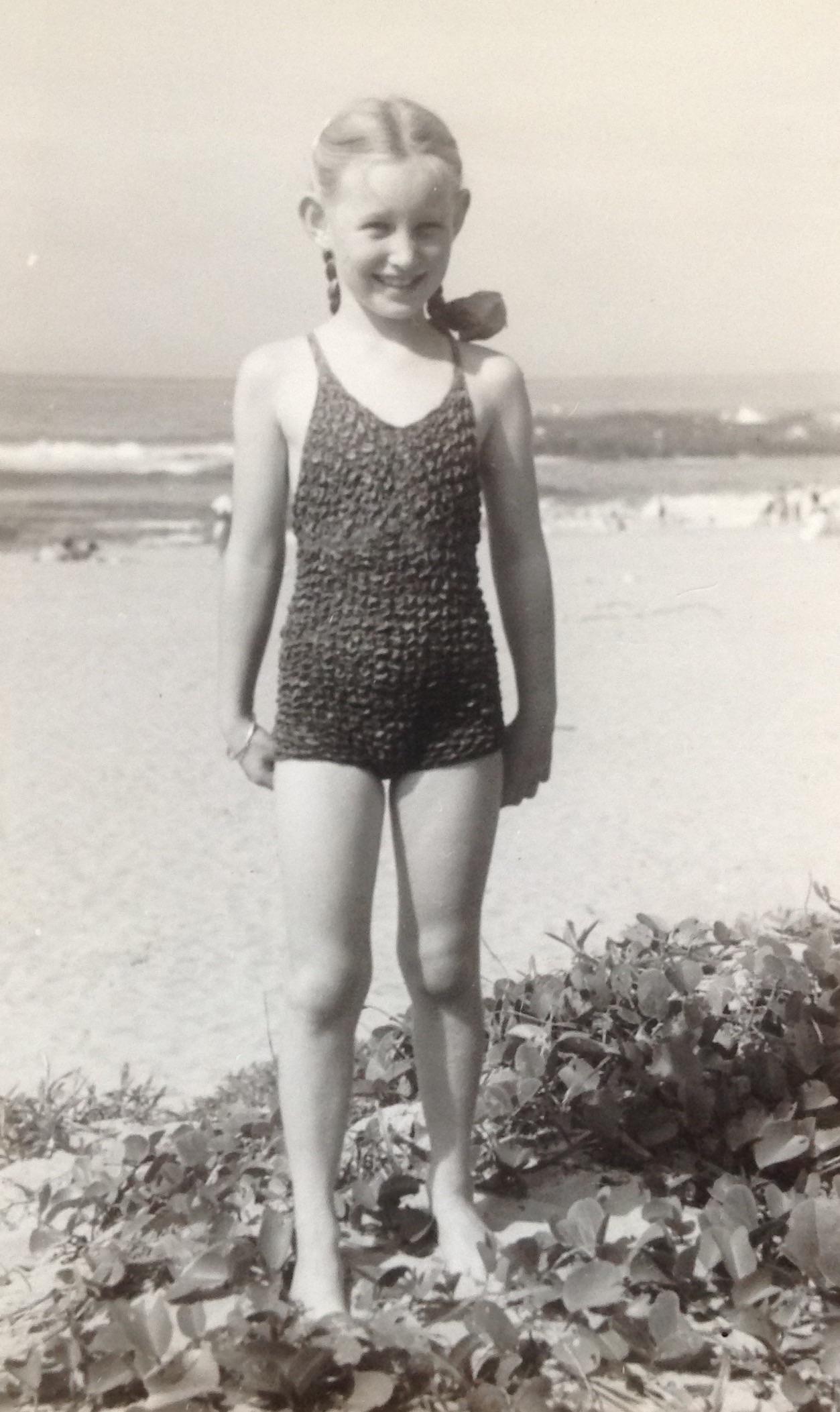 Photograph of young S. Furze – Taken by Mac’s Studio in Amanzimtoti. Circa 1940s

Beach photograph taken in Umhlanga Rocks during 1959 via Carol Hardijzer.jpg 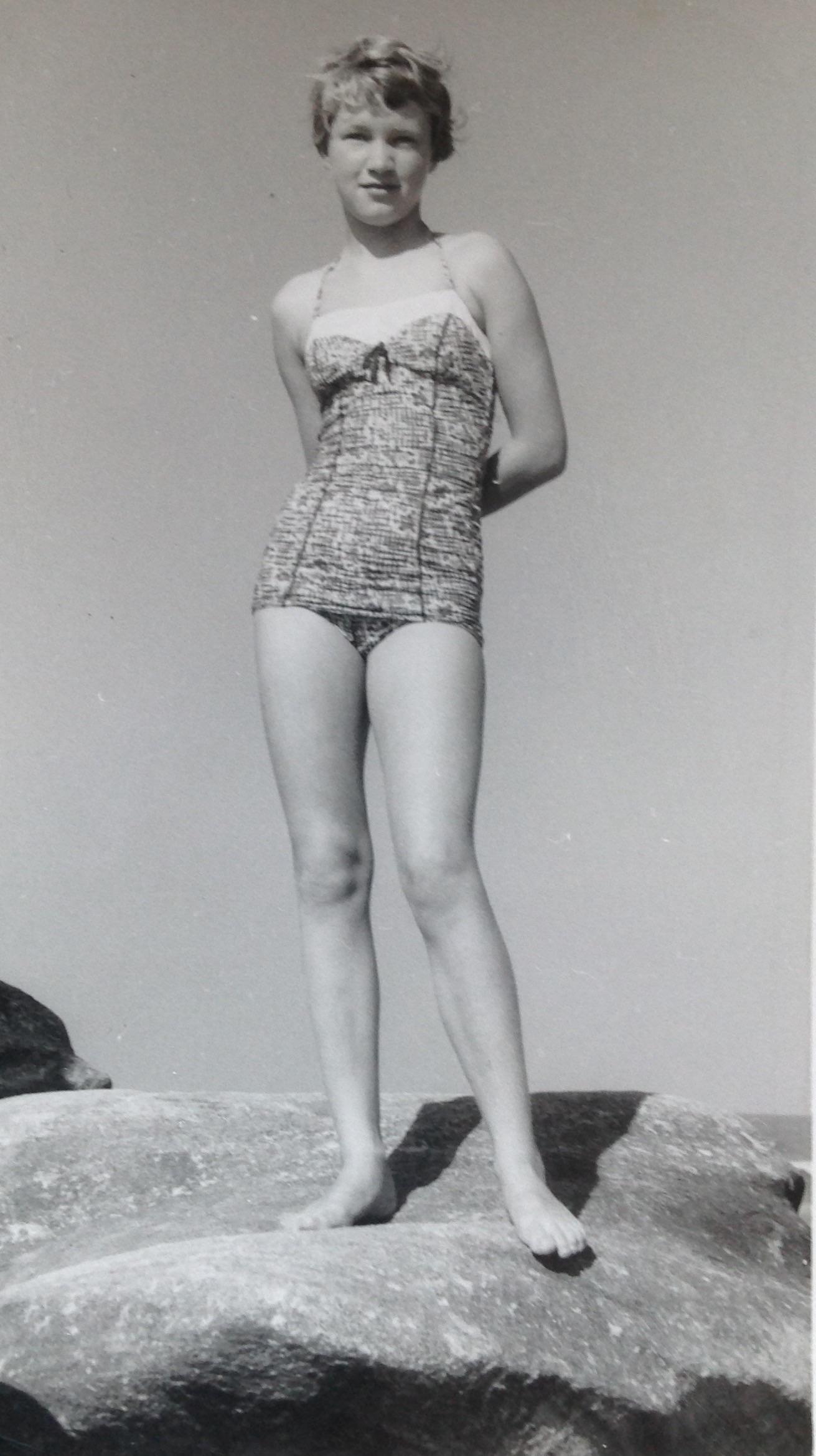 Photograph taken in Umhlanga Rocks during 1959. This young lady would today be around 72 years old (if still alive)

Main image:  A Barrett’s photograph of unknown woman – Marine Parade Durban. Circa 1950s – Note the smoke from the ships in the background