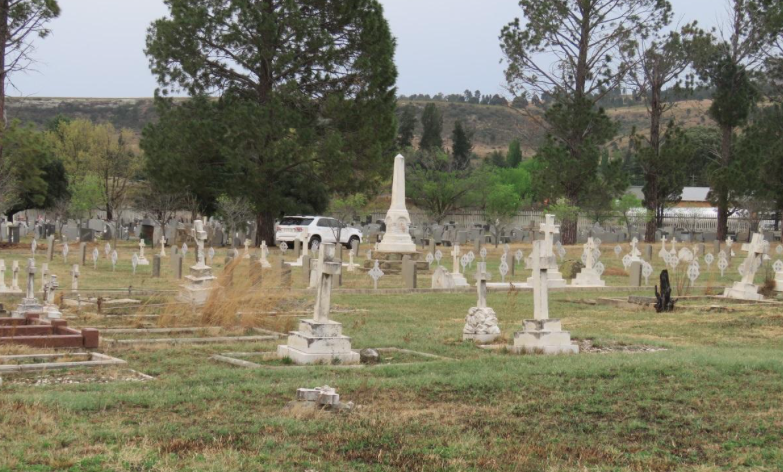 Most Gauteng holiday makers break their journey to the KZN Coast at one of the Ultra City or Star Stop facilities at Harrismith or Van Reenen’s Pass. Once fortified with fuel, fast food and soft drinks, they continue on their way, aware they are halfway to Durban.

This is a pity as they miss the opportunity to visit one of the more interesting and historical cemeteries in South Africa. This is the old Harrismith Municipal Cemetery, situated north-east of the corner of Laksman and Greyling Streets.

Harrismith was established in 1849 and is one of five towns in South Africa named after Sir Harry and Lady Juanita Smith. The other four towns are Ladismith in the Western Cape, Ladysmith in KZN, Smithfield as well as Aliwal North, which commemorates Smith’s victory over the Sikhs in 1846. But I digress.

The Harrismith Cemetery contains a number of historical graves which link us to momentous events in our history:

When entering this cemetery, the British Garden of Remembrance, about half an acre in extent, lies to the right of the cemetery roadway.

It contains the graves of 437 imperial soldiers of which, 111 were killed in action or died of their wounds. In the Free State Province, only the President Brand Cemetery in Bloemfontein and the Kroonstad Garden of Remembrance contain the remains of a greater number of British soldiers.

British Soldiers who were originally buried where they would have fallen in battle, in the Harrismith district, were reinterred during 1958/1959 in this Garden of Remembrance. The remains of such soldiers were transferred from farms and sites such as Tweehoek, Tradouw, Georgiana, Culloden, Mill (Molen) River Bridge, Albertinia, Slangfontein, Oliviershoek, Oldenburg, Walterton, Gallaway Roodebloem, Van Reenen, Bughtie and Goedgeven. A number of obelisks in the cemetery commemorate the names of soldiers from various regiments who died in Harrismith or its surrounding areas. Amongst others, one commemorates the 1st Battalion Imperial Yeomanry and another, the Riflemen of the 60th Kings Royal Rifle Corps.

There is a rather touching tombstone requesting the passerby to charitably pray for the soul of Lieutenant Robert Charles Lucius Stapleton-Bretherton who was killed in action at Rondedraai. The epitaph is headed by the Latin proverb “Fiat Voluntas Tua” (Thy Will be Done) and ends with the following exhortation: “Jesus! Be not to me a Judge. But a Saviour”. This stone may have been erected some period after the Boer War ended when emotions had cooled. 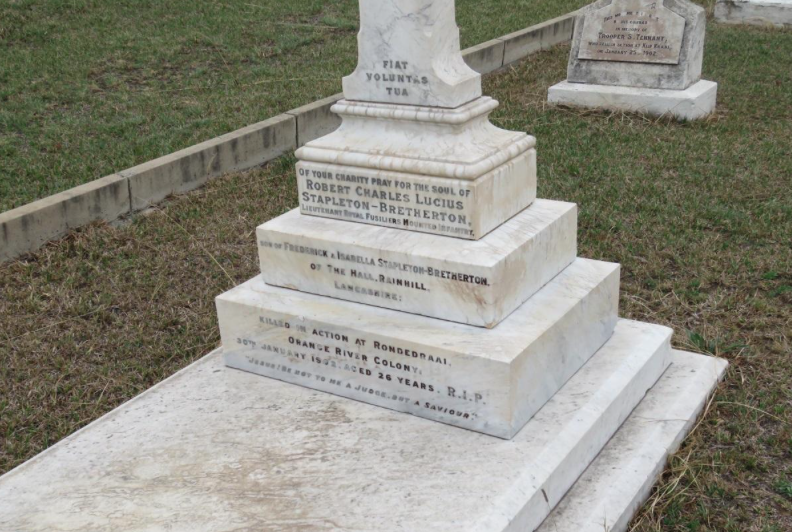 The Harrismith Imperial Garrison remained until May 1913. Hence, there are a number of graves of British soldiers and their families buried in the military precinct several years after the conclusion of the Anglo Boer War. One such grave stone reminds of the hazards of crossing a railway line. “Cecil Hastings Kirwan, Lieutenant, the Wiltshire Regiment, accidentally killed at the level crossing at Harrismith, 26th May 1910, aged 24 years”.

A large obelisk stands next to the Town Hall on which are inscribed 123 names of soldiers of the 2nd Grenadier Guards and 78 names of the 2nd Scots Guards who lost their lives in South Africa. Although these regiments were based at Harrismith and many of their men were buried in the town's cemetery, some were not, and their graves may be found as far afield as Thaba Nchu and Standerton.

The roadway in the cemetery turns to the right and on the left hand side behind the trees lies the Jewish precinct. Unfortunately, the local Jewish population in Harrismith, as in many other South African towns has dwindled.

On the opposite side of the cemetery roadway are the three monuments detailing the names of the approximately 193 women and children who died in the Harrismith Concentration Camp and who were buried in this cemetery. In 1907 the Town Council was asked to put in order the graves of old men, women and children who had died in the concentration camp. A dominee Theron*, then in Bethlehem, wrote that he had been present at most of the burials, but the graves had not been marked, nor any register kept. Some names, written on paper and enclosed in bottles were placed on the graves, but by 1907 these had disappeared. There are therefore very few individual graves of the camp deceased.

Close to the concentration camp precinct is a tombstone commemorating the last son of “volksmoeder” Johanna van der Merwe, namely Martinus Delport born 1857 and died 23 August 1944. Johanna van der Merwe (7 March 1825 – 15 January 1888) was a Voortrekker heroine who survived the Weenen massacre, an attack on her trekking party on 17 February 1838, despite suffering more than twenty assegai wounds. 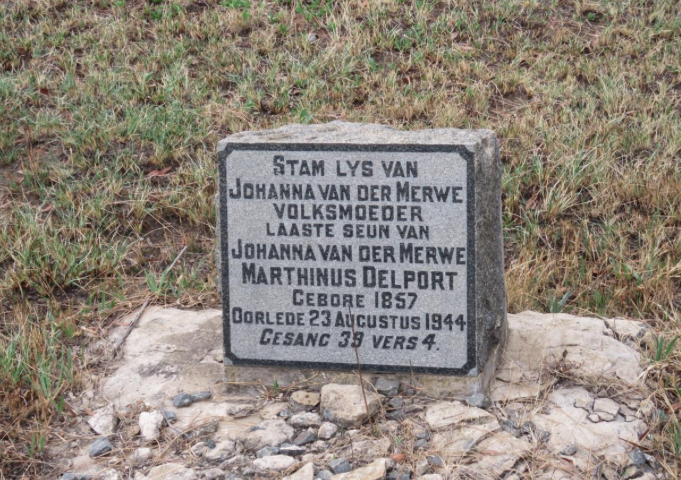 She later married Hendrik Frederick Delport with whom she had seven sons (despite being permanently crippled by the attack). She died aged 62 and was buried in Rouxville. An ox-wagon in the historic 1938 Great Trek Centenary commemoration trek as well as a South African Navy submarine was named in her honour.

There is a tombstone to the memory of George Herbert Noble who drowned in the Floods of Saskatoon, America (sic) on 9 June 1908. The epitaph states “The stone was erected by those who loved him best.” One wonders how the connection between Saskatoon (Canada) and Harrismith arose.

The cemetery roadway turns right and then right again. One is now at the South-Western end. At this corner there is an obelisk commemorating the 45 members of the Harrismith Boer Commando whose remains were reinterred here in 1938. In 1987 a new obelisk was erected by the National Monuments Council. The original monument dating from 1938 was placed flat in front of the new obelisk. 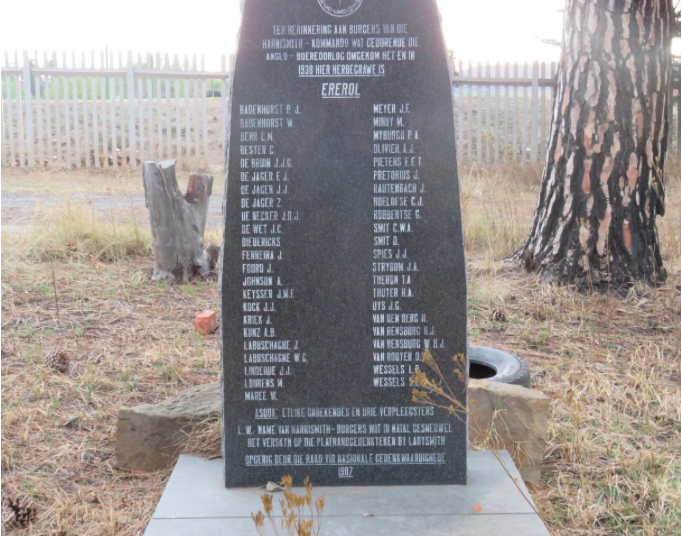 There is also an obelisk in front of the Dutch Reformed Church listing all the names of the men of the Harrismith Commando who died in the war. Of a total of 73 names of burghers 19 are listed as having died at Platrand (6 January 1900), 32 killed or mortally wounded elsewhere and 22 of whom died in prisoner of war camps overseas and are buried in India and Sri Lanka.

Virtually adjacent to the burgher obelisk are two very historic graves of burghers who died in 1866 during the Sequiti War between the Free State and Basutoland.

The inscription on the first grave, which has a monumental tombstone, is in Dutch. Translated it reads as follows:  “To the memory of Hendrik Oostewald Dreyer, the fourth son of J. A. Dreyer of Constantia and grandson of T. F. Dreyer of Wynberg, Cape Colony. Born at Constantia on 4 October 1833 and died in the Basuto War on 29 March 1866. Erected by his sons”.

The English inscription on the second grave reads: “In memory of Joseph Simbeck who was born at Baireuth Bavaria December 25th 1818. And fell in action near Harrismith during the Basuto War March 29th 1866. Aged 47 years and 3 months. In the Midst of life we are in death”. 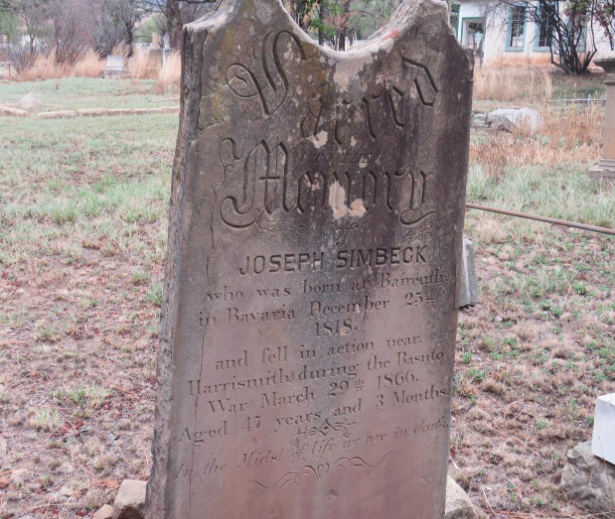 They were both killed at Witsieshoek and their names together with 96 of their comrades who also fell in this war, appear on the Basuto War Memorial in Bloemfontein. The others died in battles and skirmishes in the Smithfield area, Thaba Bosiu, Nauwpoort Nek, Ladybrand area, Hlotse area and Moperi’s Stadt.

According to Major G. Tylden, the war consisted of two campaigns from 1865 to 1868. There was a considerable amount of fighting in the first campaign from 1865 to 1866 but very little in the second from 1867 to 1868. The Basotho were completely defeated in the field but, owing to the failure of the Free State to capture Thaba Bosiu, the Basotho managed to keep on skirmishing until Great Britain intervened and forced the Free State, completely exhausted financially, to make peace on terms which secured the Basotho in the possession of their land as it is today, but under the rule of the Cape Colony.

It is not commonly recalled today that the Basotho was amongst the first Africans to acquire both horses and firearms hence they skirmished on horseback, which in the mountainous disputed territory between the Free State and Basutoland, proved very effective and difficult to counter.

There is a historic tombstone which links Harrismith with the Anglo Zulu War of 1879. This stone lies about midway between the two Basuto War graves and the British Garden of Remembrance. Unfortunately it has broken into two and now lies flat on the ground and can therefore easily be overlooked. The epitaph reads “Sacred to the memory of Edmund Frederick Tarte, Late Capt. H. M. 24th Regt. Who died at Harrismith January 6th 1891, Aged 59 Years.” 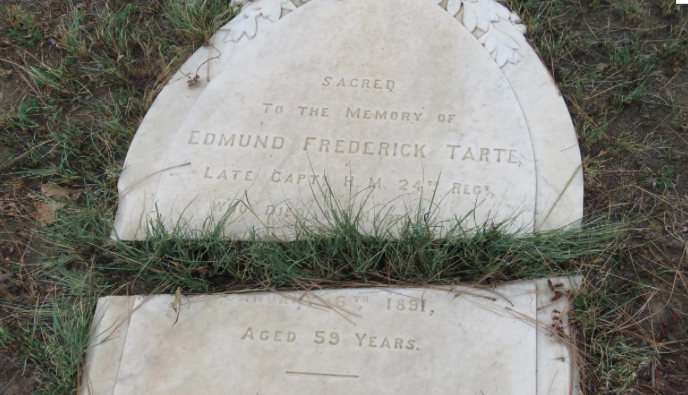 The 1st 24th Regiment was annihilated by the Zulus at the Battle of Isandhlwana on 22 January 1879. It would be most interesting to know what Captain Torte’s role was on that fateful day and during the remainder of this campaign. Captain Tarte probably served during the Anglo Zulu War as the 24th Regiment was thus called until 1881 when its name changed to that of the South Wales Borderers.

There are two graves relating to the 1914 Rebellion. One is of Private H. Wright of the Harrismith Rifles, who died on 15 December 1914. The other is that of Burgher H. Retief of the Bethlehem Commando who died on 20 December 1914. Since there is no mention of their being killed in action, unlike similar Rebellion graves in Winburg and at other sites, one may assume they died of ill-health. By the middle of December 1914, the Rebellion in both the Free State and Transvaal was largely suppressed. General Christiaan De wet was captured on 1 December 1914 and General Beyers drowned while trying to cross the flooded Vaal River on 8 December 1914, to escape from encircling Government forces.

There is an inscription on a grave to Edward Arthur Mundey, aged 27 years. “In Memory of my Dear Son. Died in Action August 30th 1916. Interred German East Africa. Forever with the Lord”.

There is also an inscription on a monumental grave to the Mandy family. It reads: “Also Charles Edward Mandy Killed on Active Service. April 5th 1917. Aged 45 years. Interred at Nairobi”.

There is a rather melancholy tombstone in remembrance of three members of the Terry family, which reads: “In loving memory of my son Henry Walter Seymer Terry Killed in Action France 1918. Also my sister Caroline Walker. Also my daughter Florence Doreen Terry. RIP”.

Lastly, one tombstone serves as a reminder that relationships between English and Dutch speakers in the Free State were considered to be more congenial than in the neighbouring ZAR. It reads: “In loving memory of Robert Macfarlane born at Paisley, Scotland 3rd May 1833. During a residence of forty seven years in South Africa, he took the deepest interest in, and did much noble work for the welfare of his adopted country especially for the late Free State. Died at The Oaks Harrismith 21st July 1903 Aged 70 years”.

One hopes and trusts that the Harrismith Municipality and community will make every effort to preserve and protect this historic cemetery.

* If correct, then most likely Dominee C. P. Theron who was minister of the Dutch Reformed Church at Bethlehem from 1872 to 1912, although he was interned at the Ladysmith Concentration Camp from 1901 until the end of the war.