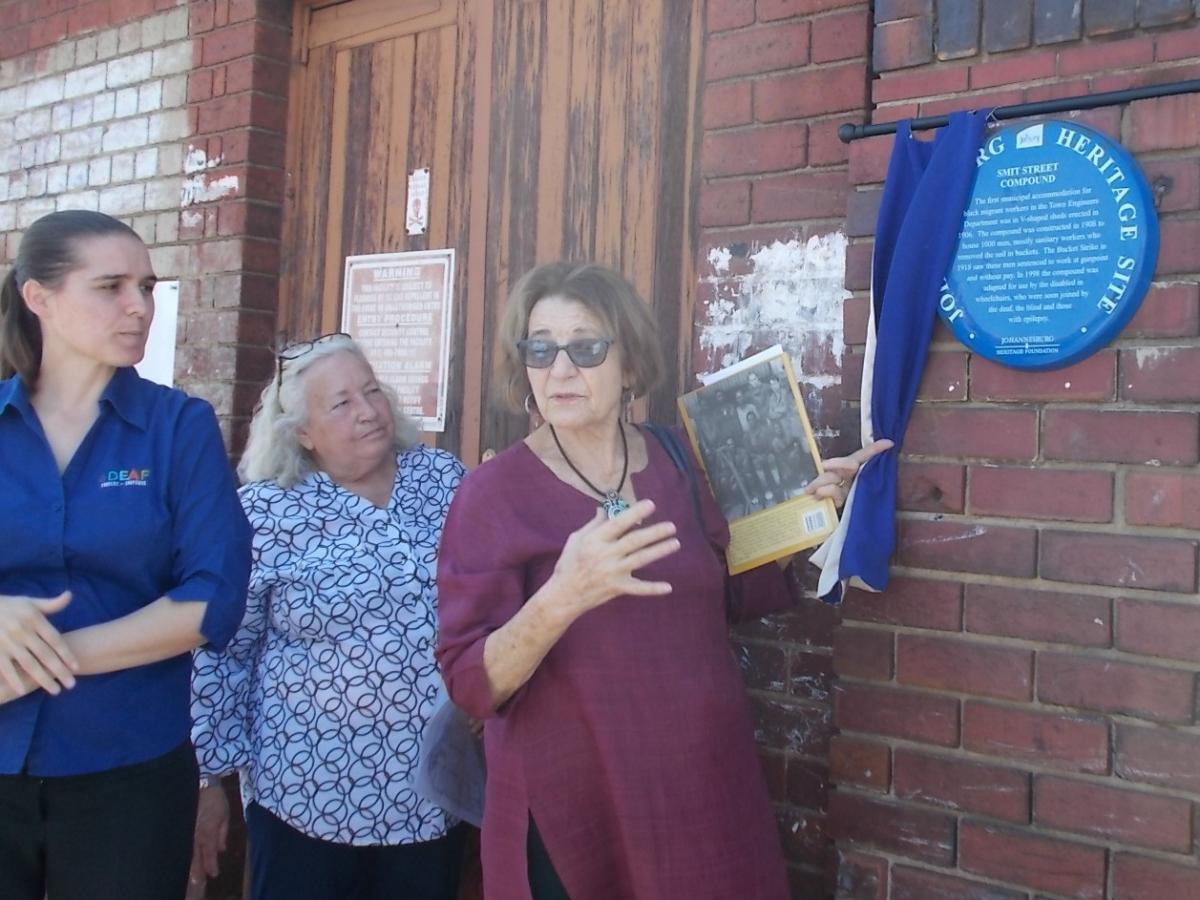 Today 22 Solomon Street, Braamfontein is the Library’s administrative headquarters but the odd mix of buildings - a blend of workshops, living quarters, and offices presents a puzzle about origins and the several changes in activities on the site.

In the afternoon the Johannesburg Heritage Foundation under the guidance of Mrs Flo Bird, founding member of the JHF and first Chair, led an hour long tour of the interesting old buildings on the site  and unveiled two blue plaques on these city properties. Flo introduced the layered history of the complex. The blue plaque signals a heritage site of significance and sets out in an elegant short paragraph a summary history.

At one time at least 1000 workers were housed here. The tour offered a workers perspective of labouring life in the city of Johannesburg that can be traced back a century. Compound living is today recognized as socially undesirable and unacceptable but at one time a single man who came to Johannesburg had to fend for himself, find a job and grab any accommodation possible. There are still remnants of those practices in the economy of the town.

The unveiling of two blue plaques is an opportunity to mark the social history of black working class life in the city. Here is a history that is so often neglected, it's about people, primarily men in this case, who also sought an income and a better life in the growing town. These were the Smit Street Compounds for mainly the City Engineer’s Department. Workers were invariably migrant workers, living in single sex male compounds or as we call them today, hostels. This workers' housing here dates back to 1906. The men who lived here often worked as sanitary workers, in a pre-water borne sewerage era when buckets of sanitary waste had to be collected by cart. The young town of Johannesburg was efficiently organized to provide essential services for a growing number of residents as the boundaries of the town expanded in concentric circles. Johannesburg’s status shifted from town to city in 1928 and the population expanded. By 1936 and the city’s Golden Jubilee the population of the city topped half a million. City services covered water, fire fighting, roads, storm water drains, transport provision (trams and later trolley buses), building regulations, rubbish removal, sanitation  processing plants, electrical power generation. The city’s Vade Mecum (click here to read the review on The Heritage Portal) and published annually is a small guide to city administration that gives a good  idea of how the Municipality saw its responsibilities. Ordinary labourers were the backbone of all these services.

The plaque inscription reads as follows:

The first municipal accommodation for black migrant workers in the Town Engineers Department was in V-shaped sheds erected in 1906.  The compound was constructed in 1908 to house 1000 men, mostly sanitary workers who removed the night soil in buckets. The Bucket Strike in 1918 saw these men sentenced to work without pay under threat of guns. In 1998 the compound was adapted for use by disabled in wheelchairs, who were soon joined by the deaf, the blind and those with epilepsy. 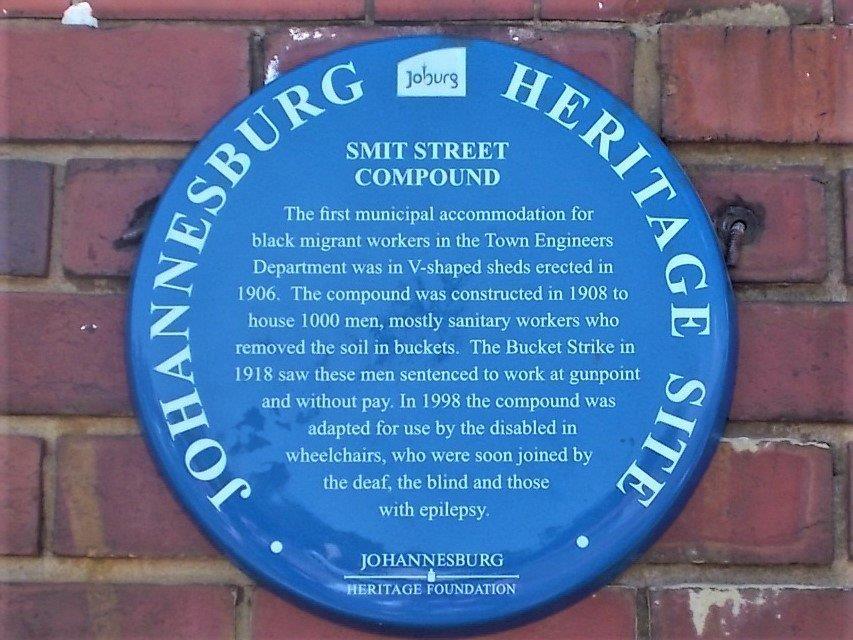 The second blue plaque unveiled by the Johannesburg Heritage Foundation commemorates the Engineering Workshops for the two engineers departments. These workshops too have a long history dating back to 1905 and then expanded a few years later to accommodate heavy machinery. This was a busy industrial hub and by 1940 training facilities were also part of the complex. In recent years  the outsourcing of many of the functions of the City Engineers Department and a different hierarchy made the workshops redundant and the City’s Johannesburg Municipal Library and Information Services moved into these workshops. This is where the Library headquarters are now located. The Johannesburg Public Library located on Beyers Naude Square is itself a great city institution  responsible for educating generations of school and university students, in addition to all the citizens of Johannesburg who see in a great public library an opportunity to educate themselves through books and reading. Behind every library are the trained librarians and administrators who keep the city’s  books, printed treasures, pamphlet collection and city maps safe for posterity even when a functional library offers computer and internet and wifi accessibility to its users. 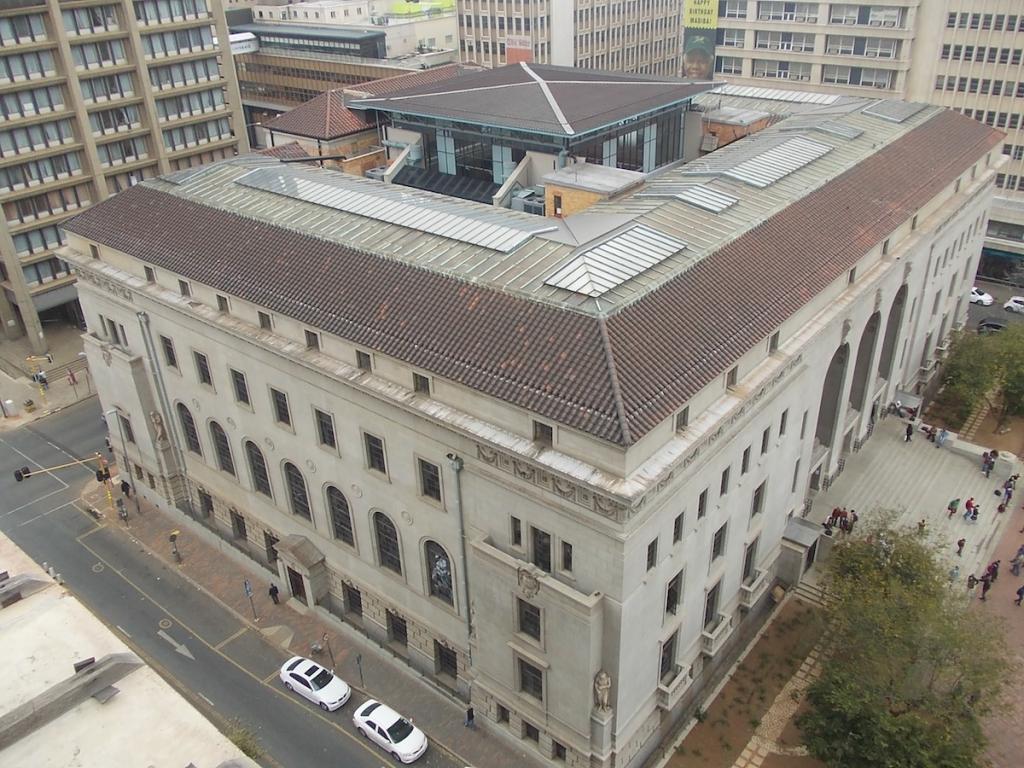 Johannesburg Public Library from above (The Heritage Portal)

Most recently, the building has been included in Mayor Mashaba’s list of 71 City-owned properties for redevelopment, and a battle to protect its heritage has been quietly waged by the Johannesburg Heritage Foundation. The future of this property complex is in the balance as the  Johannesburg City Council seeks to revitalise and recycle properties and respond to the demand for the upgrading and conversion of old properties into residential units. A not dissimilar migrant hostel has been converted into what is called artisanal urban living offering apartments on a rental basis. The growing student population of the Universities of Wits and Johannesburg has created a substantial demand for housing.

The blue plaques are a distinctive and successful means of signalling the past history of this significant complex.

Below is the inscription for the Engineering workshops:

The buildings at 22 Solomon Street are historic and fascinating. In 1905 the Town Council established workshops for the town engineer which were extended in 1908 to house heavy machinery and equipment. The first municipal accommodation for black workers in the town engineer’s department was in V shaped sheds erected in 1906/7. In 1908 a compound was constructed to house 1,000 men most of whom were sanitary workers. In 1918 the infamous Bucket Strike saw these men sentenced to work without pay under threat of guns and assegais. Councillor Hilda Watts wrote” I have seen individuals living under foul conditions but I have never seen a mass of workers so disgustingly housed as in some of our municipal compounds.” 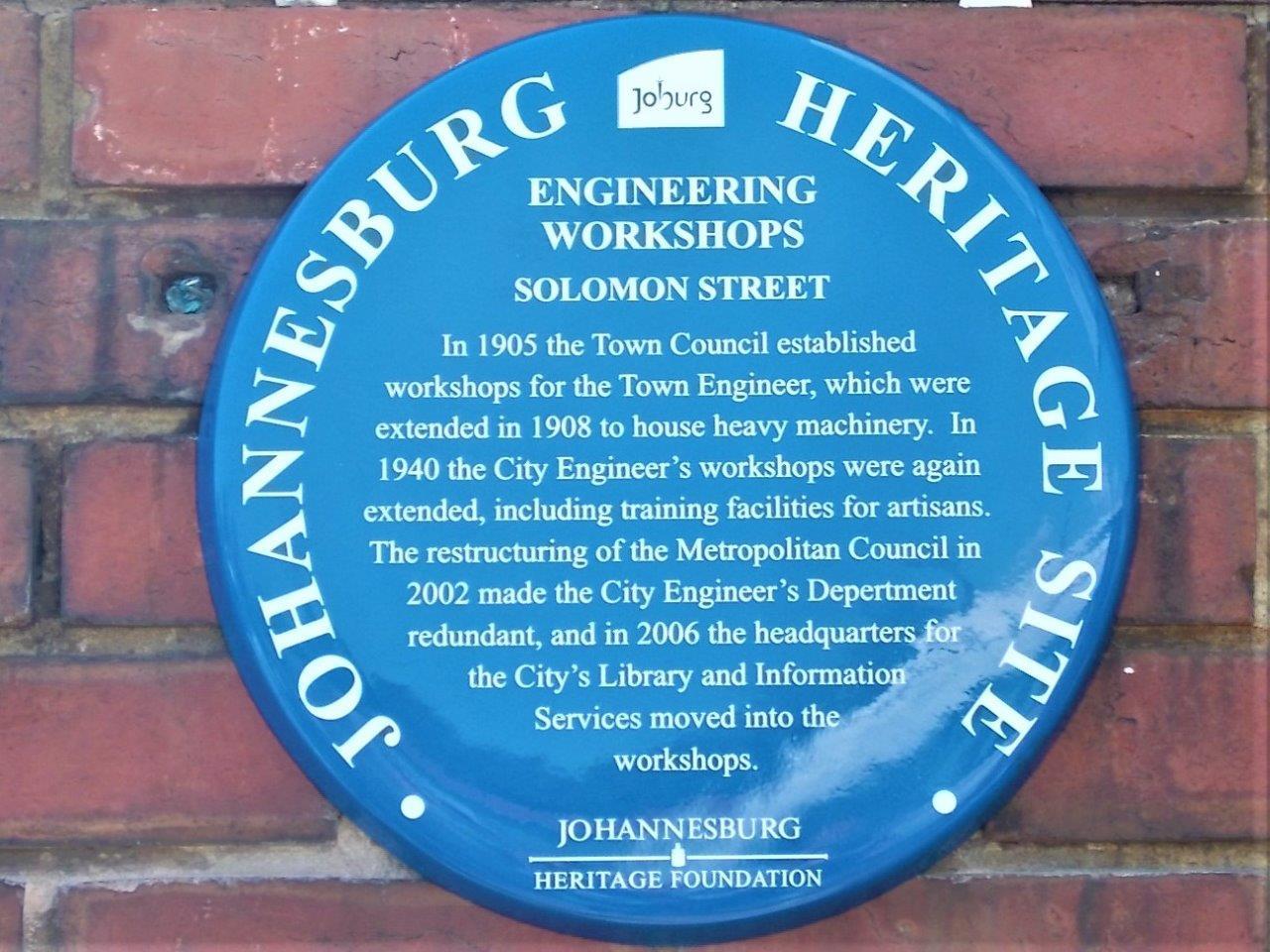 The plaques were unveiled by Luli Calinicos, Raymond Cardoso and Flo Bird (see main image). The speeches on this occasion were presented in sign language as the buildings now serve as workshops for disability services.