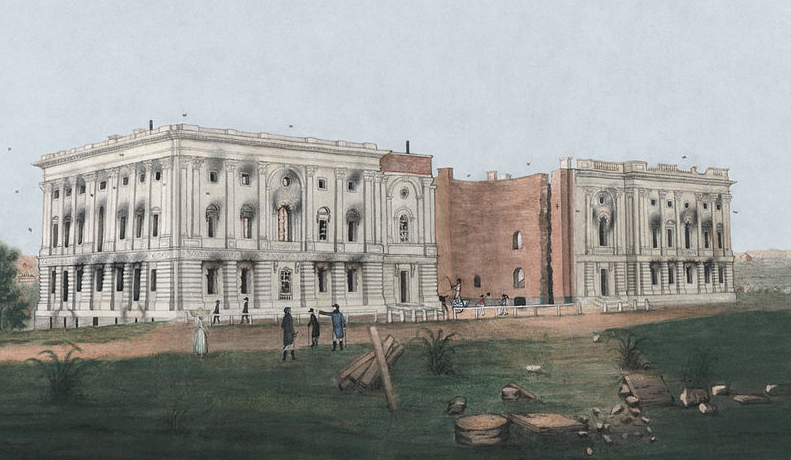 The year of 1812 is mainly remembered for Napoleon Bonaparte’s ruinous retreat from Moscow, when his “Grande Armee” was forced to evacuate the city or face starvation with the Russian winter impending. It was the beginning of the end for “Boney” and his defeat would eventually lead him to abdicate as emperor of France in 1814. Napoleon’s failed “Russian Campaign” would be known as the “Patriotic War of 1812” by the Russians and seventy years later would be celebrated by the first performance of Tchaikovsky’s “1812 Overture” in Moscow. Therefore it is ironic that the 1812 Overture is played every 4th of July to celebrate American Independence Day and many Americans consider the piece to be a celebration of their victory against the British in their “War of 1812”. This misconception arose in 1974 when Arthur Fiedler, the conductor of the Boston Pops orchestra performed the piece, complete with canons roaring and bells ringing, during the Independence Day celebrations of that year, which began the tradition.

The other misconception is that the Americans were victorious in the War of 1812, ask any Canadian and he or she will tell you otherwise. The truth of the matter is that the peace treaty signed at Ghent on Christmas Eve of 1814, ended the war with no conclusive winner, in effect it ended as a draw, even though extra time was played on January 8th 1815 when the Battle of New Orleans was fought, a victory for the United States. Owing to slow communications across the Atlantic, President James Madison, heard the news of Andrew Jackson’s victory prior to the news of a truce agreed between the British and American negotiators (negotiations that had begun in August 1814). The American victory in New Orleans, although it had a “feel good” factor, was a hollow one as it had no bearing on the peace terms concluded by the Treaty of Ghent and the treaty was honoured when the Senate ratified it unanimously on February 16th 1815; both sides had had enough. 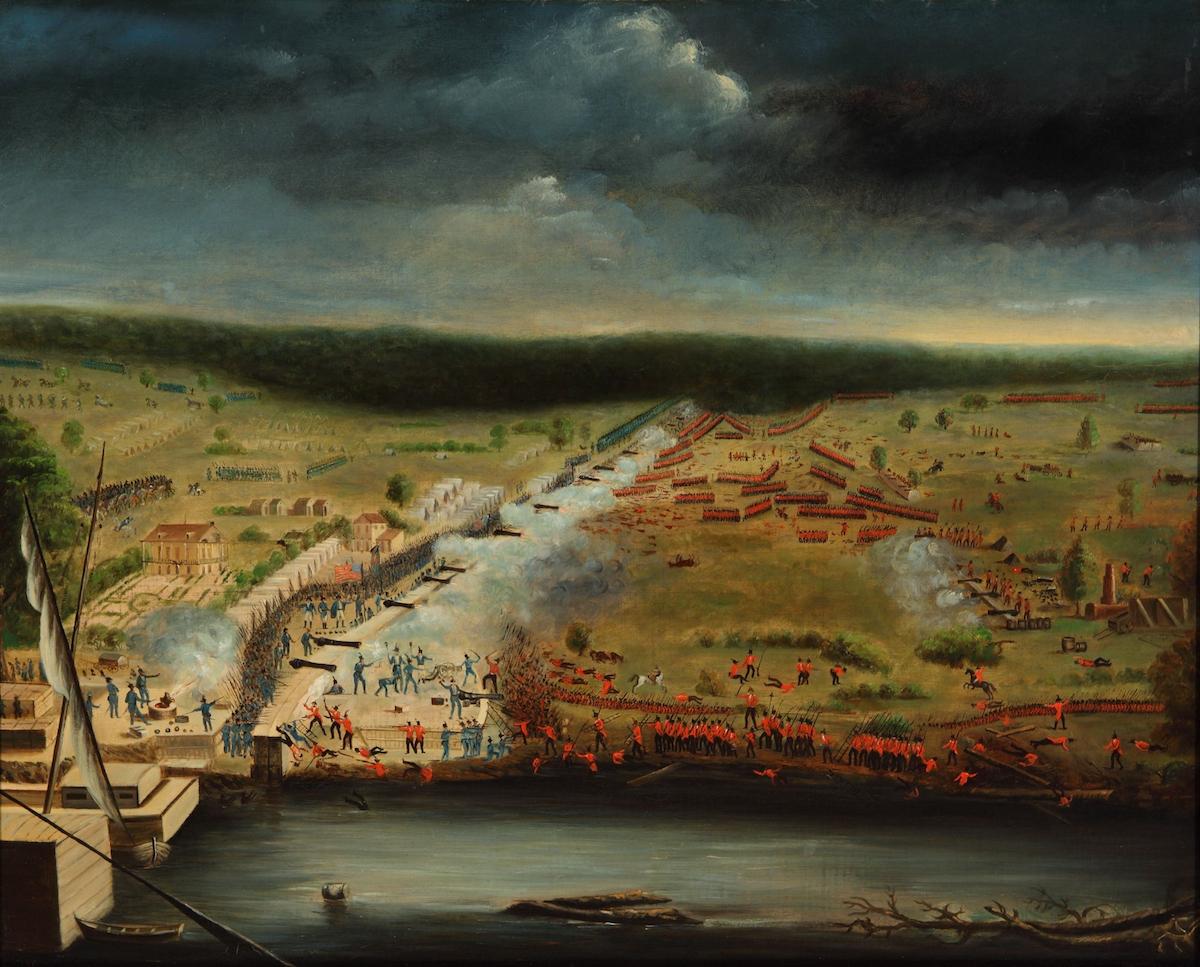 Painting by Jean Hyacinthe de Laclotte (1766 - 1829), a member of the Louisiana Militia who participated in the battle; painted by him after the victory based on his sketches made at the scene (New Orleans Museum of Art via Wikipedia)

The War of 1812 (1812 to 1815) is by and large a forgotten war in Britain, but not so by the Canadians as it gave them an identity distinct from the Americans, even before nationhood which was granted in 1867. In Britain it is rarely talked of and my knowledge of it stems from my childhood memories of listening to Lonnie Donegan and his Skiffle Group singing the “Battle of New Orleans” which made the British Top Ten in the summer of ’59 and was a very good cover version of Johnny Horton’s rendition that reached No.1 in the U.S. hit parade in June of 1959 (winning the Grammy Award for Song of the Year). The song was written and originally sung by Jimmy Driftwood (real name James Corbitt Morris) who was a History Teacher turned Country & Western singer song writer. The song was a catchy number but its verses bore little resemblance to the real battle. Click here to listen.

Why was the War of 1812 fought to begin with? The primary reason for hostilities was that the British were “impressing” American sailors (forcing them against their will) to be crew on the Royal Navy’s warships (effectively a death sentence) to fight against the French in the Napoleonic Wars. American protests against the “press ganging” of their citizens were to be completely ignored by the British. A further cause was the perception that the British were aiding the Native American tribes to thwart the westward expansion of the Union. Things would come to a head on 18th June 1812 when the 4th US President, James Madison, declared war on Britain and the American army prepared to launch a three pronged attack into Canada in order to emancipate those living there from British occupation.

At the outbreak of the war a confederation of Native American tribes, under the political and military leadership of the Shawnee chief Tecumseh (1769-1813), chose to fight on the side of the British as their abiding aim was to stem the encroachment of their lands south of the Great Lakes by the United States. Tecumseh had grown to manhood through tumultuous times where border warfare had ravaged the Ohio River Valley as the Americans pushed westwards to command the Northwest Territory (what would become the states of Ohio, Michigan, Indiana, Illinois and Wisconsin). Tecumseh would fight alongside the British until he was cut down at the Battle of the Thames in Canada, on the 5th October 1813; with his death went the hopes of justice for the Native American.

Earlier in 1813 the Americans could have won the hearts and minds of those living just across the border in Canada as they were after all kith and kin, but they ruined their chances by laying waste  to the settlement at York (Toronto today) on 27th April after winning the battle for the town. It was a reprisal for the British igniting the fort’s gun powder magazine, which caused an almighty explosion which mortally wounded the commanding U.S. General, Zebulon Pike and killing outright many more. The news of the action against innocent civilians (who were mostly American by birth), stiffened the resolve of all those living in Canada to defend the land they held dear. The Battle of York was a strategic victory for the Americans but a disaster as a public relations exercise and they got far more than they bargained for and the annexation (land grab) they hoped for north of the St Lawrence River, seen as easy pickings, was never to materialise; the agreed borders at the war’s end would remain the same as they had been before it began (status quo ante bellum). The British would avenge the burning of York by setting Washington D.C. ablaze on 24th August 1814.

Neither the British nor the Americans could deliver the killer blow to bring about an ultimate victory and thanks to the ending of the Napoleonic Wars the reasons for the War of 1812 became null and void, namely the Royal Navy no longer needed to “press gang” or carry out blockades on France, which action had had an adverse effect on U.S. trade, thus the time had come to parley for peace.

Battle of York airborne via the Toronto Public Library.png

Bird's-eye view looking northeast from approximately foot of Parkside Drive, showing arrival of American fleet prior to capture of York, 27 April 1813. (via the Toronto Public Library)

For the past 200 years the United States and Canada have shared the longest undefended border in the world and between British Columbia and Washington State (on the 49th parallel north) there is a Peace Arch at Blaine, which was built to commemorate the centenary of the Treaty of Ghent. There are two inscriptions on the frieze, one on either side, on the Canadian side it reads “Brethren dwelling together in unity” and on the American side “Children of a common mother”.

In South Africa a similar sad story can be told of war between peoples who had more in common than not, both Brit and Boer could have (and probably should have) found compromise which would have prevented a needless war which would tarnish their relations and polarise future opinion on ethnic and racial lines. The war in question was The Boer War (1899-1902) and it has similarities with the War of 1812 and the comparison could provide fertile ground for postgraduate history research project.

Postscript: In Upper Canada, close to the Great Lakes the inhabitants were in the main people of the First Nation (the indigenous tribes), fur trappers and British Loyalists forced to flee the USA on that country’s independence from Britain in 1783.

Main image: Damage to the US Capitol after the Burning of Washington via Wikipedia