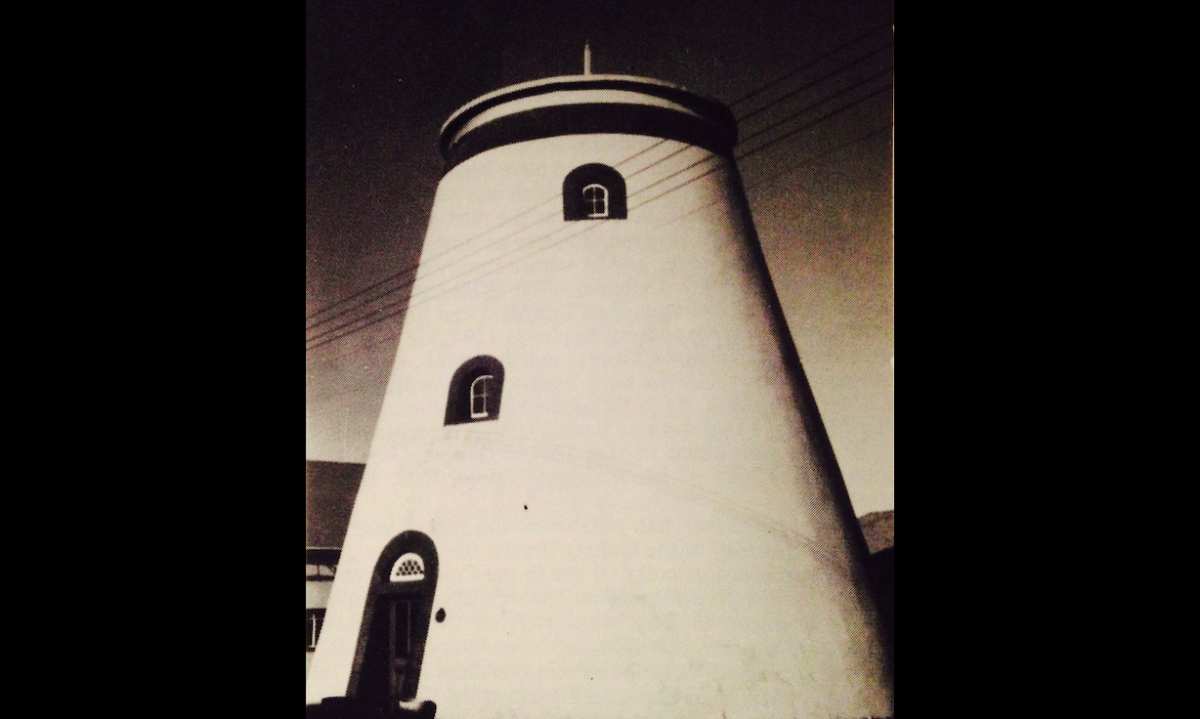 We are very excited to publish this piece on what appears to be South Africa's oldest surviving windmill. The article was written by Ivor Dekenah (note the surname) and appeared in the 1981 edition of Restorica, the journal of the Simon van der Stel Foundation, known today as the Heritage Association of South Africa (HASA). Thank you to the Restorica copyright holders, the University of Pretoria, for giving us permission to publish.

In a large courtyard in the grounds of the Alexandra Institution, Maitland, Cape, stands South Africa’s oldest windmill. Completed in 1782, it will be 200 years old in 1982 [233 years old in 2015]. fourteen years older than Mostert’s Mill on De Waal Drive, Mowbray, known to all Capetonians and tourists. Few people are aware of the older Dutch mill, yet is is well worth a visit.

The mill, marked Nieuwe Molen on the maps of that time, is a massive truncated-cone tower-type structure fully 42m high, with sides sloping much more steeply than those of other Cape windmills and about a metre thick at the base. In a Government Notice of 4 August 1978 declaring it a National Monument, it is described as “bullet-shaped”. With its enormous sails - slightly tilted on account of the sloping sides - proudly turning in the wind and its white walls gleaming in the sunlight it must have been the most prominent feature along the Liesbeek and Black Rivers. 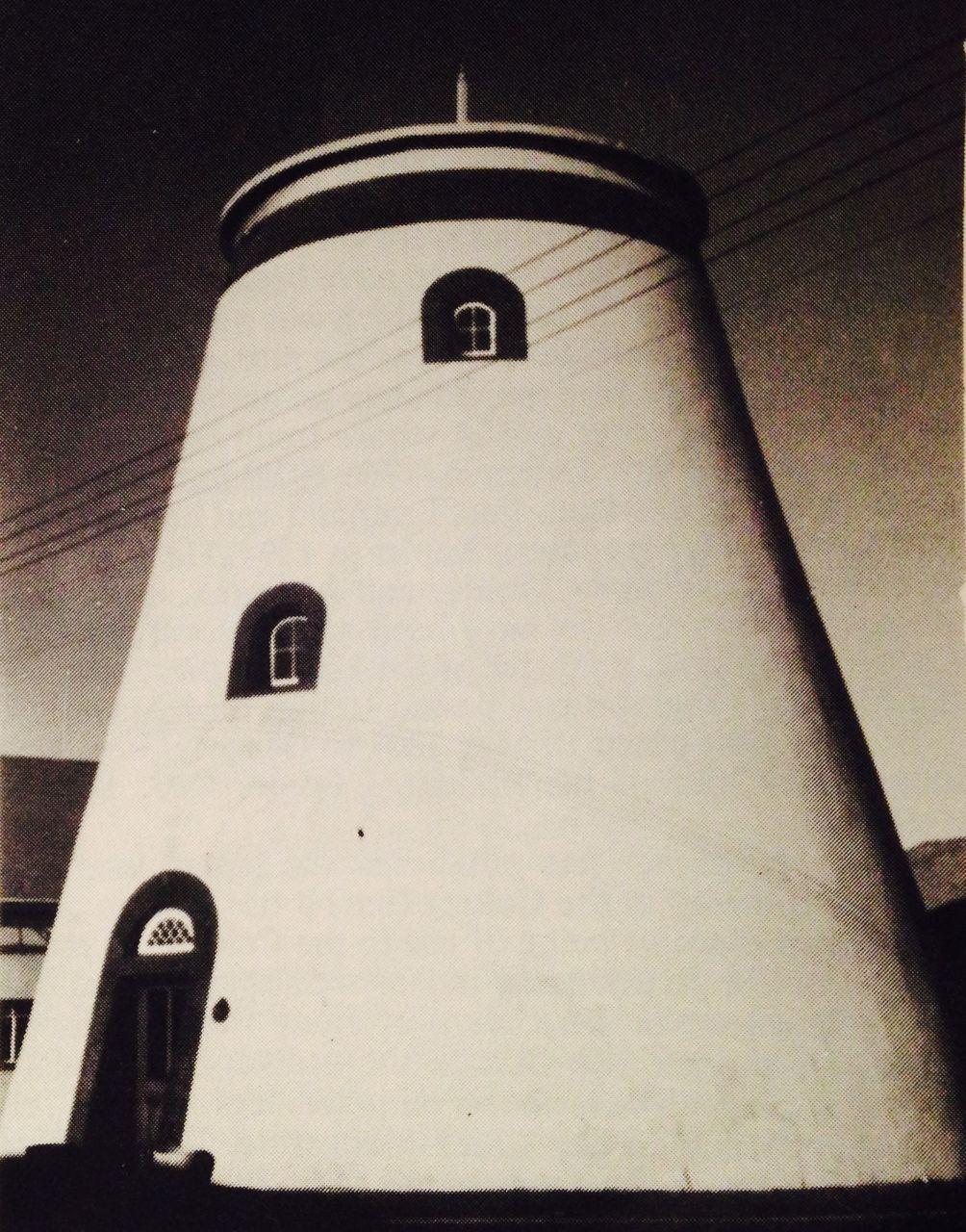 Today it is still in use as a chapel for inmates and staff of the Alexandra Care and Rehabilitation Centre, It can seat about 150 people. The heavy beams in the ceiling, the doors and fanlights are the original timber. In the arches over the doors and windows small, Dutch geele klinkers or klompie bricks were used, and from the ceiling hangs a fine chandelier. Outside each of the two entrances lies embedded one of the “granite jaws” - heavy millstones, 1,5m in diameter.

Its history goes back to 1779 when the Burgher Council which owned the land decided to erect the mill since existing mills were no longer able to grind all the grain harvested. In the stone lintel above one of the doors are the words: “Die mool is begotten in ’t jaar 1780 door den burger en baasmetselaar Johan Gottfried Mocke. Voltooyt 1780”. An inscription over the other doorway records the names of the president and two members of the Burgerraad who were presumably detailed to supervise the erection of the mill - C van der Poel, G C E Maasdorp and G H Meyer.

The mill was called De Nieuwe Windmolen since there was already a Burgher Council windmill on a neighbouring farm Oude Molen in the Valkenburg region between the present Pinelands and the Black River. The Oude Molen appears to have still been in use until the 1860s but has disappeared completely and is only commemorated by the name of a railway station near Pinelands.

In 1801 the Cape Government, on the recommendation of the Burgher Council, decided to sell by public auction both “des Colonies Nieuwe Wind Moole” and the older mill. It is possible that the mills needed certain repairs and that the Council was unwilling to spend money thereon if it could get a satisfactory price. The Nieuwe Windmolen was sold on 21 December 1801 to Barend Carolus van Niekerk (spelt Van Nieuwkerken in one place) and the latter on 20 February 1802 to J. de Vries. Both transfers were registered in the Deeds Office on 21 September 1802. The extent of the Nieuwe Molen property was 17 morgen 36 sq. roods 108 sq. ft.

Van Niekerk was the owner for only a short period for in 1806 it was bought from Van Niekerk’s widow’s estate by Jacob Hendriks who had it for only six months. These first two private owners seem to have been more interested in the farming than in the mill which was neglected and fell into a state of labefaction. It was the next owner, Kassien Claasen Dekenah, who immediately set about putting it into full working order and in whose family possession remained for 46 years. Dekenah (1760-1828) had come to the Cape in circa 1793 from East Friesland and had here married Cape-born Magdalena Kepler in 1794. He is mentioned in the early Court Calendar and Almanak, and Theal’s Records shows him to have been a churchwarden in the Lutheran Church. Transfer of the 17m36/108 of land with the buildings thereon was passed to him on 1 May 1807.

In a petition dated 10 May 1807 to General Grey, Commander-in-Chief of his Majesty’s Forces K.C. Dekenah states:

Your petitioner has purchased the largest and most useful Wind Mill in the Colony (but) it has been in a state of decay in place of being of use to the Colony for several years… The Army and Navy as well as the Inhabitants have often been in great want of flour from the incompetence of the present mills to the ordinary demands, in confirmation of which your Petitioner begs leave to refer Your Excellency to the Chief Magistrate. The Mill can grind three times the quantity of Corn in the same time than any other in the Colony can do.

He goes on to request to be allowed to buy four “Teak Wood Beams for an axeltree from the Naval Yard”. In a subsequent memorial addressed to the Governor, the Earl of Caledon, on 11 November 1807 he refers to “having spent a lot on repairs he still requires… four beams of stink-wood of 15 inches square and 30 feet in length… to put the mill in Complete repair.”

All repairs having been effected, the mill became known as Dekenah’s Mill, and even after it stopped working it remained a prominent landmark on the Liesbeek until 1828 when the Royal Observatory was built.

On 1 May 1810 Dekenah was granted 36 morgen of quitrent farmland contiguous to the 17 morg 36/108 on which the mill stood and which already belonged to him; and on 23 October 1821 this was superseded by a fresh grant of 48-odd morgen of perpetual quitrent land, including the 36 morgen just mentioned. It follows that he then had over 65 morgen in all. 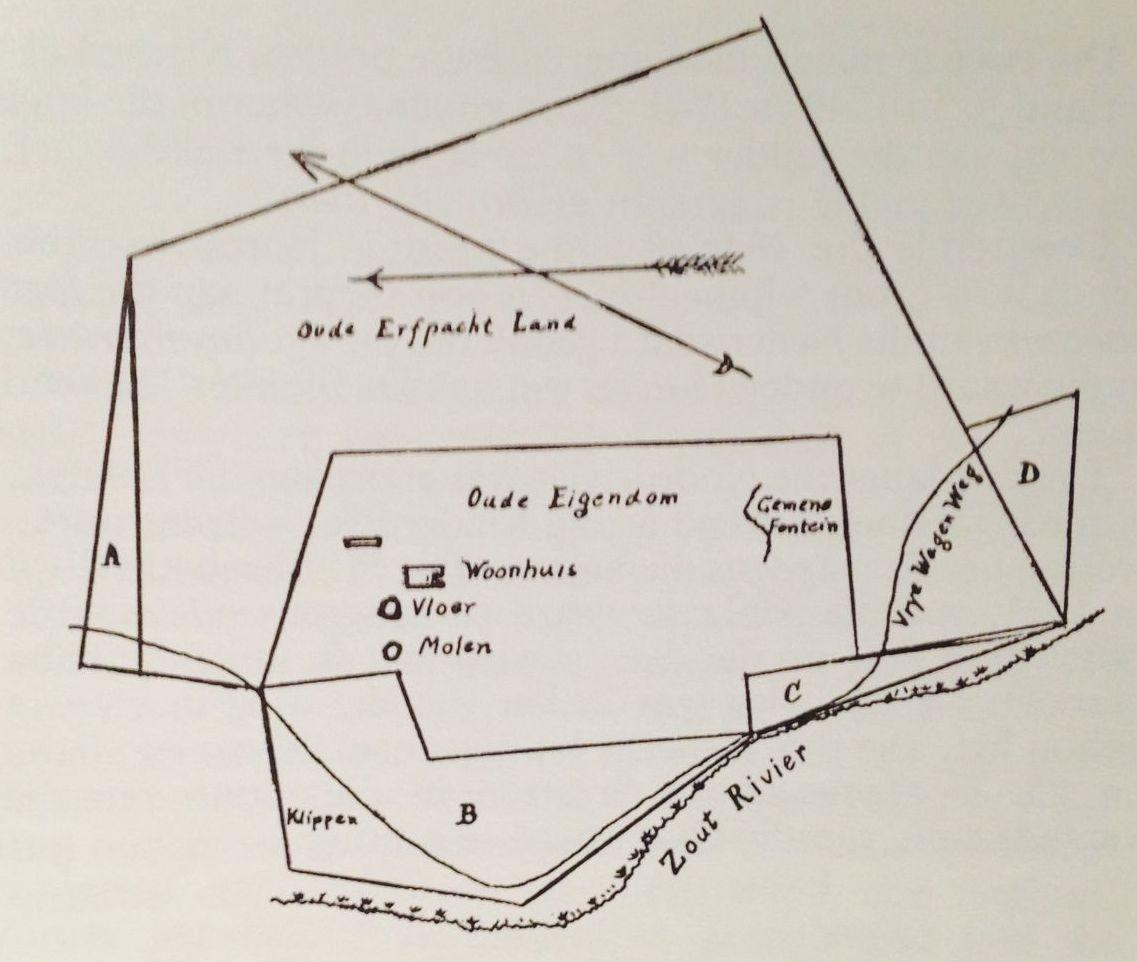 Diagram of K.C. Dekenah's land as at the end of October 1821. The part showing the mill was bought in 1807; the Oude Erfpacht Land was acquired by grant on 23 October 1821 (Restorica)

In 1822 Dekenah and his son, Diederich (born 1806), were joined by a nephew, Albert Jacob Dekenah, on the latter’s arrival from East Friesland. The census forms (opgaafrollen) in the Archives show that he did not do badly as an agriculturist and miller. It is of interest to note that in July 1835 Sir Thomas Maclear, the Astronomer Royal, tried to arrange boarding facilities for the artist Bowler “with a neighbouring farmer, one Dekenah”. The farmer was Diederich.

Kassien Dekenah died in 1828, his son in 1840. The following year his widow sold the property to her son-in-law F.B. Stegman. Stegman was the husband of Johanna Magdalena Dekenah, second youngest daughter of Kassien and his wife (born Kepler).

Nieuwe Molen changed hands several times thereafter. Deeds Office records show transfers from Stegman to Charl Marais on 27 April 1847 and from Marais to Michael Joseph Louw on 19 March 1856. Louw who also owned other pieces of land around the mill land made certain subdivisions; the mill and 2 morg 137/120 sq. rds with it went to William Hall on 21 April 1863. Other portions surrounding the mill were sold by Louw to M. Daly and A.J. Zeederberg.

Meanwhile, between 1897 and 1899 the mill with the various pieces of surrounding land was transferred to Van Ryn Wine and Spirit Company which sold it in 1901 to the Government for the building of a hospital - the corner stone of which was laid in 1906. In 1918 the hospital became an institution for the area and treatment of mental defective patients.

In 1928 the mill was fitted out as a chapel; on a plaque on the wall inside is inscribed: “A D 1928. This mill was renovated for the worship of the Almighty God by the benefaction of the late Helena C. Steytler…”

It is gratifying to know that the mill has escaped the ravages of time and the destroying hand of man.