Step into a wagon and go back 200 years 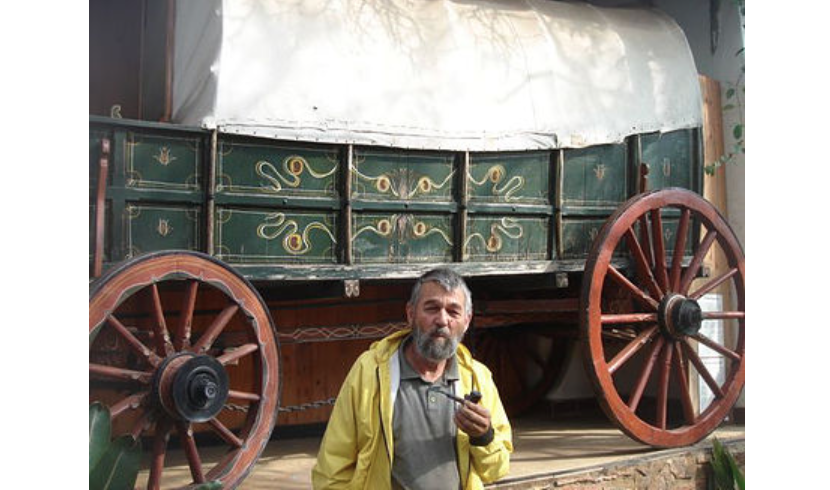 In the article below, journalist Lucille Davie tells the story of her visit to the unique Oxwagon Lodge near Hartbeespoort. The article was first published on the Mogale City website on 30 October 2009. Click here to view more of Davie's work.

There’s not many things these days that last two centuries. One thing that has is the traditional Voortrekker wagon.

You can get to see half a dozen of them placed in a circle at the Oxwagon Lodge, east of the Hartbeespoort Dam, just beyond the northern border of Mogale City.

And if you want to know what it was like to be a Voortrekker trekking across the country, stay over at the lodge and sleep in a wagon.

They have been beautifully restored, and each has a double bed in it, with an adjoining bedroom and bathroom.

Retired entomologist Erik Holm, something of an expert when it comes to oxwagons, says: “Wagons are only one part of our proud history.”

As a curious entomologist he got into the wagon business when he decided to restore an old oxwagon. “I’m supposed to be a scientist, but I’m a jack of all trades.”

He discovered that there was more to it than he thought. “It involved all the crafts – carpentry, leatherwork and paintwork,” he says.

When he finished the restoration, he says, everyone wanted to sleep in it. And everyone, including the local museum staff, wanted him to come and restore the old oxwagons lying about in their backyards.

He set up his restored oxwagons in a circle 20 years ago, which later became the Oxwagon Lodge. 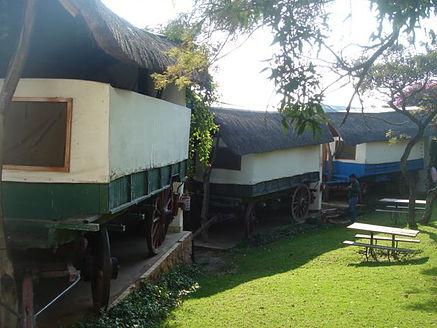 Best in the world

“Our horse and ox-drawn vehicles are the best in the world.” Particularly compared to the American prairie wagons, which were rubbish, says Holm.

Our oxwagons can boast some remarkable features. An oxwagon carrying up to seven tons could negotiate itself over rocks and dongas.

So what’s so special about these vehicles?

Holm has done his homework. He says that their history goes back to the days of Jan van Riebeeck after he landed at the Cape in 1652.

“He had a few built but didn’t have a wheelwright. He used his ship’s carpenters. The wagons weren’t good, they were not made for Africa.”

Van Riebeeck had no horses when he outspanned at the Cape. The first people he had contact with were the Khoikhoi who had cattle. The Khoikhoi were nomadic pastoral people who lived around what became Cape Town. They used their oxen for transporting their possessions when travelling, but also for fighting – they tamed them sufficiently to ride them.

“Van Riebeeck learnt from the Khoikhoi that oxen are quite trainable,” explains Holm. This was a breakthrough, he says. In addition, oxen were much more hardy, and could be inspanned and go trekking for long periods.

This is how the kakebeenwa (jawbone wagon) was born, according to Holm – there was a means of pulling a wagon. And of course this led to the gradual advance of settlers into the interior, started first by the trekboers.

Freed sailors, who were originally slaves, started farming, and found a need for some form of transport. They tried making wagons. They used as their first template a European farm wagon, called the ladder wagon.

But pretty soon they developed their own, totally different wagon, which became known as the kakebeenwa. The wooden base took the shape of the jawbone of an ox.

It wasn’t long though before wagons became mobile homes, with canvas tents covering the body of the wagon.

These wagons were used for two centuries, and when they could be used no longer, they had another use – they were broken up and used for firewood.

Holm says that 17 varieties of wood were used in wagon making. “We have 800 woods here, whereas in Europe there’s not much selection. South African woods were the best in the world for wagon making.”

The woods ranged from the hardy yellowwood, abundant in the Cape at the time, to the Boekenhout, a softish wood which would act as a kind of shock absorber but at the same time would stay firmly in position. “It was like an inflated cushion.”

Ingenious methods were used. The iron rim around the wheel would be burnt on to the wheel. The charcoal would protect the iron rim from rust and rot, important for a wagon that traversed rivers.

“This was a wonderful recipe to make a wheel. There is a whole science to assembling a wagon. And these wagons were exported to the whole of Africa.”

This kakabeenwa could be disassembled in five minutes. All it needs is to hit out four pegs on the wheels, lift up the top of the wagon, and the wagon was in several pieces. This could then be carried by four people across a river or over impassable mountains.

In addition, the kakebeenwa was flexible and mobile, and could twist 40°, making it very adaptable to trekking over rough conditions, where no roads had been created. Wagons were pulled by between 12 and 16 oxen.

A European wagon tradition that was used in South Africa was painting the wagons. The wheels were painted with red lead paint, an excellent water repellent. “A wagon looks wrong if the wheels are not red.” Wagon bodies were painted green in Europe, and blue in Britain.

Scrolls, flowers and ornaments were painted on the wagons and the chests that they carried.

“The Great Trek was a colourful affair,” says Holm, “like a carnival. The clothing was flashy, with feathers, braiding and colourful stitching. And the wagons were also colourful.”

The painted wagons had another significance. No wagon maker would spend hours painting his wagon if it wasn’t a quality item – so it was a guarantee of the craftsman’s work.

Wagons were repainted once a year, and wagon makers could be recognised by the designs on the wagons.

“Half the Great Trek leaders were wagon makers,” adds Holm.

“The whole industry is so unique – such a standard that was better than anything in the world.” 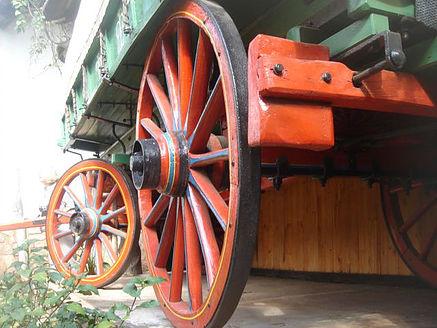 But then a strange thing happened. After the Great Trek it appears that Afrikaners stopped making the wagons, indicates Holm. Scotsmen, probably from the 1820 British settlers, took up this “honest work”.

At the same time wagons changed. Roads had been created but loads were getting heavier, particularly with the opening of diamond and gold mining in the interior. The Scotsmen adapted the wagon, and it became like a trestle, becoming two metres wide, with smaller wheels and thicker spokes. There were two – one was 4m long, and could carry 1,5 tons; another was 5,5m long and could carry a load of up to 7 tons.

These weights were carried on solid steel axles, and on mountain passes the wagon drivers inspanned two sets of oxen. These were transport wagons, famously used by Percy Fitzpatrick in Jock of the Bushveld.

This happened very quickly, says Holm, so that within 10 years wagons were mostly of this kind. By 1900 there were 100 000 of these wagons on the country’s roads. They lasted until the 1970s, when they were pulled by tractors. But because no one could repair them anymore, they soon became obsolete.

“The trekkers were the toughest pioneers in the world, compared to the Americans. They far outstripped Westerners. The wagons are a South African legacy. I’m tremendously proud of this pioneering spirit that runs thick through South Africa.”