Questions on the origins of the name 'Witwatersrand'

In all I have read about the Witwatersrand I have not come to know precisely when and by whom the name was coined. I am hoping that members of The Heritage Portal can throw some light on the subject, and also reflect on the reason for the given name.

In regard to the name Witwatersrand, in English the commonly quoted meaning is “The Ridge of White Waters”, a derivative of the more direct English wording “White Waters Ridge”. However, the name is Dutch; it was given to the regional landform by early Dutch-speaking Boer pioneers whom, because of their lifestyle, had a fundamental appreciation of the geomorphic significance in Southern Africa of this particular landform (discussed further below). Other white pioneers and missionaries, including thousands of English speaking “Uitlanders” who flocked to the Witwatersrand after the discovery of gold in conglomerate in 1886, naturally perpetuated the English rendition of the word.

The usually cited English meaning of the of the Dutch name, Witwatersrand, mentioned above, I believe is wrong.

Ridge of White Waters - Inside Cover.png 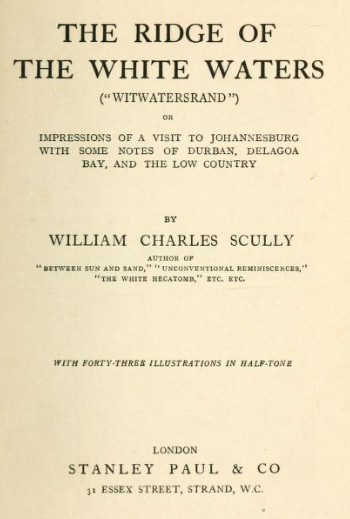 Inside cover of the book by William Scully published in 1912

How the English version of the name Witwatersrand was, or became, commonplace is exemplified by a report in 1878 by Alfred Armfield, the Inspector of Goldfields for Sir Theosophilus Shepstone’s government in Pretoria from 1877, cited in Cartwright (1962). The Inspector, who spent 6 months panning “water courses” on and around the Witwatersrand with notable lack of success, wrote as follows, “Having satisfied myself that, to find gold in sufficient quantity to pay, I should abandon my exploration of the Witwaters Rand”. The naive splitting of the original Boer word in two explains the early English translation  “Whitewaters Ridge”.

From perpetuation of the English version over the many years it follows that it was, and still is, uncritically accepted that the English name “Ridge of White Waters” is justified by the existence of noteworthy streams which issue from the Ridge. In fact, candidate streams along the Witwatersrand are actually small and few, and it is a moot point whether the ones that do exist may, collectively, have been remarkable enough to cause the early Dutch pioneers, and their followers, to characterise and define the landform in recognition of “White Waters”. On the contrary, it seems reasonable to ask the question: “If white-water streams were as remarkable as the accepted English nomenclature suggests, why was it that the richest and longest gold-bearing ridge on earth was discovered NOT by previous, assiduous, alluvial prospecting in the region (including by Armfield, see above) but by the crushing and panning of outcropping conglomerate  strata on the ridge?”

It seems to me that the original meaning of the Dutch word Witwatersrand deserves consideration. 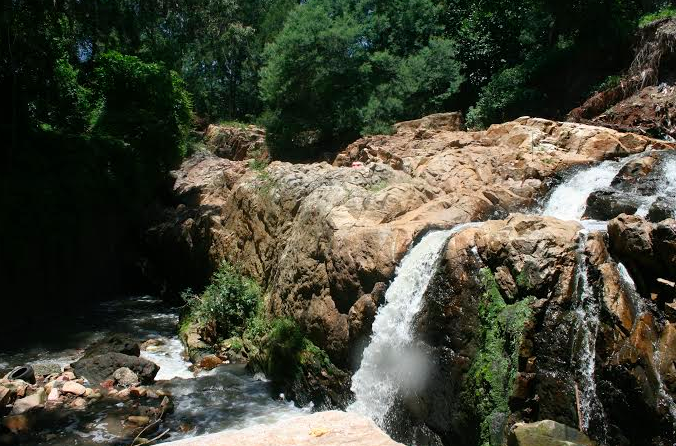 To go back 60 years, during my first lecture in geology at Wits University in 1959, by Professor T.W. Gevers, Head of the Department of Geology, he made the statement that Witwatersrand meant “white watershed”. He was adamant that in the Dutch language used by most of the earliest white pioneers, a “watersrand” was a watershed. Why that meaning has been lost is possibly explained by the replacement, over time, of the word “watersrand” by the word “waterskeiding", in the process of the development of modern Afrikaans language from the old Dutch. It is worth remembering that Afrikaans became an official language by proclamation of the South African parliament only in 1925, after long evolution of spoken and written Dutch in South Africa. Sir John Kotze in his Memoirs (1932) noted, in not very complimentary terms, that as long ago as the 1870s the common language of the Burgers of the Transvaal Republic had changed from the pure Dutch spoken by Government members and other such elites. Further to the point, at school 70 years ago, I learned about the Industrial Revolution, which in Afrikaans was referred to as “Die Industriele Revolusie”, whereas the current equivalent is “Die Nywerheids Ontwenkeling”. I maintain that, by similar evolution of language, the old Dutch name for a watershed, a “watersrand’’, has been lost... subsumed by the newer Afrikaans word “waterskeiding”. It would be good to get authoritative comment on this subject.

Professor Gevers was a Classics scholar and a scientist of the old school, and since my student days I have lent towards his version of the meaning of the word “Witwatersrand”. My conditioning at Wits University was tempered by degrees in Geology and a professional lifetime of geomorphological and geological interpretation of landforms using stereoscopic aerial photographs, and satellite images. In the process I learned to appreciate the ability of those who live very close to the land to understand their natural environment at all scales. I believe that the Boers, who in addition were highly mobile and adventurous, were well aware of the most outstanding attribute of the Witwatersrand and named it accordingly. Whatever one's views on the naming of the Witwatersrand and the meaning of the word are, it has to be acknowledged that THE pre-eminent and distinctive landscape feature and, indeed, the unique landform attribute of the Witwatersrand, is the fact that it is the continental-scale watershed between the headwaters of the Orange and the Limpopo river systems.

I believe that there is a good case for accepting that the English for Witwatersrand should be “White Watershed”. It is the extensive outcrop of Orange Grove quartzite and other quartzites which add “white” vistas to the Rand, not rare glimpses of cascading water courses.