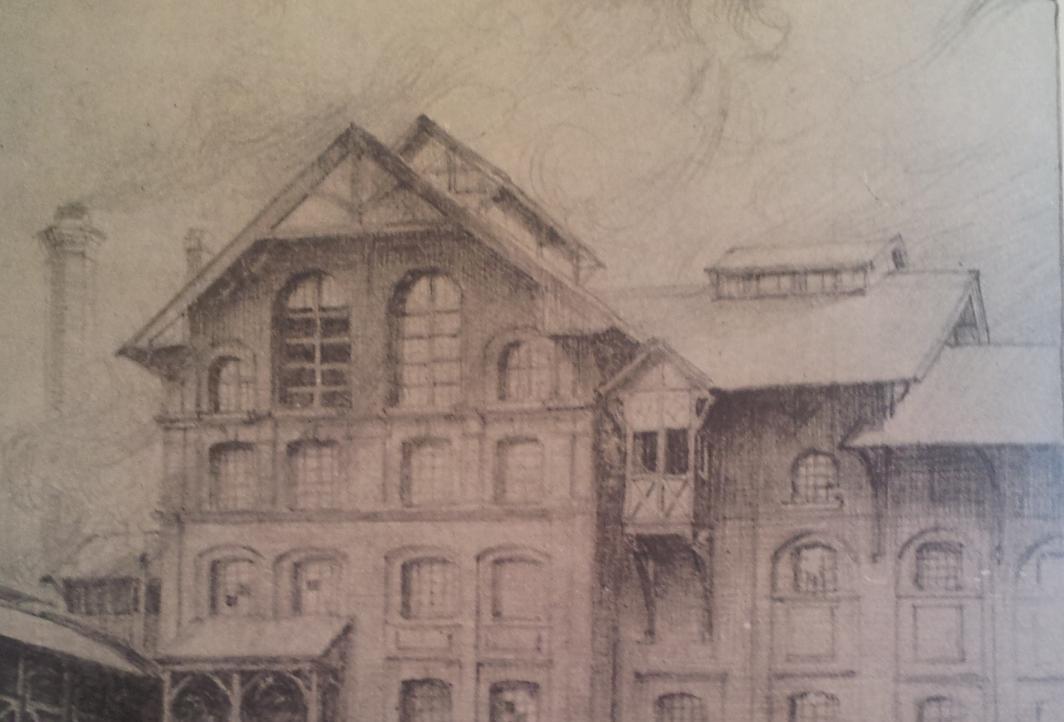 This fascinating piece was compiled by Janet Lee in 1993. She turned back the clock one hundred years to describe what life was like in Johannesburg in 1893. The article first appeared in the Johannesburg Historical Foundation’s journal Between the Chains.

The year 1893 was comparatively uneventful, if activities leading up to the Jameson Raid are anything to go by. And by comparison with other years in the history of Johannesburg and the Rand, it was not a year of such great moment. Nevertheless there were a number of events of note in many fields for which the year 1893 will be remembered.

The first mining finance house to explore deep levels was Rand Mines Limited, which was formed in 1893, taking over from its predecessor, H Eckstein & Company. In January of that year Lionel Philips, as outgoing President of the Chamber of Mines, mourned the death of Herman Eckstein, who had died earlier that month in his home-town Stuttgart, at the age of 47. Eckstein had been much respected by his colleagues on the Rand where he had come from Kimberley to found H Eckstein & Company to investigate the mining potential of the Witwatersrand.

Born in the same year as Eckstein, the Hungarian entrepreneur, Hugo Allois Nellmapius, died on is farm at Irene also at the age of 47, only a few months after having witnessed the opening of the railway from Johannesburg to Pretoria on January 1. Irene was one of the few halts on this three hour journey which was a little hazardous initially as the line was improperly ballasted. 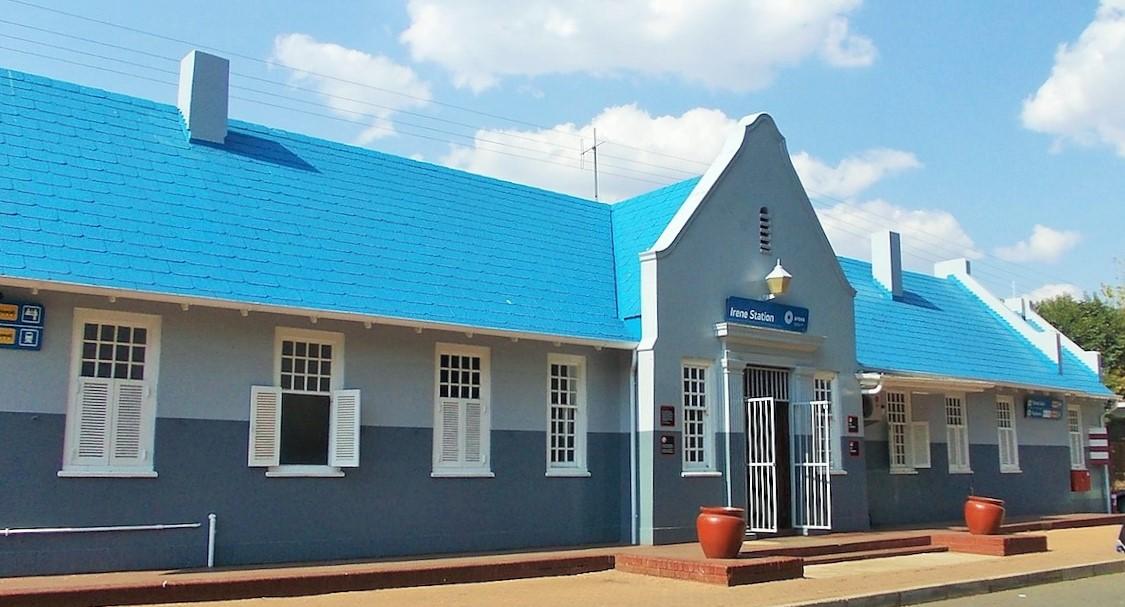 From Halt to Station - Irene Station Today (The Heritage Portal)

The first railway line on the Rand, completed in 1890 and known euphemistically as the Rand Tram, ran initially between Randfontein and Boksburg, one of its functions being to transport miners from Boksburg to the gold mines of the Central Rand. However, Boksburg was shortly to serve a gold mine of its own, with the formation in May 1893 of the East Rand Proprietary Mines Limited. It is still producing today, and was originally an offshoot of the HF Company of George Farrar and Carl Hanau.

The mining finance houses of the Rand were sometimes known as the “Big Ten” and the last but one to be established was A Goertz and Co. in 1893. Adolf Goertz was a German mining engineer who acquired interests in the Far West Rand which were taken over by his company. From it emerged Union Corporation in 1916.

Amongst the Big Ten was naturally Consolidated Goldfields, which appointed in 1893 as its consulting engineer, John Hays Hammond, the renowned American mining engineer. Earlier that year, in London, Hammond had met Barney Barnato who had engaged him to advise on mining matters on the Rand, but when Barnato failed to heed the advice of Hammond, the engineer quit and was immediately taken on by Goldfields.

During the short time that Hammond was on the Rand he lived with his family in Parktown where he entertained lavishly on a salary larger than that of Goldfields’ chairman. Established by the Braamfontein Company, as a subsidiary of H Eckstein & Co, in 1892, the suburb was officially named in March the following year. At another meeting that month, it was resolved that Lionel Philips now had to pay a monthly rental of £5 instead of £4, due to the increased size of Hohenheim, his mansion on the Parktown ridge. 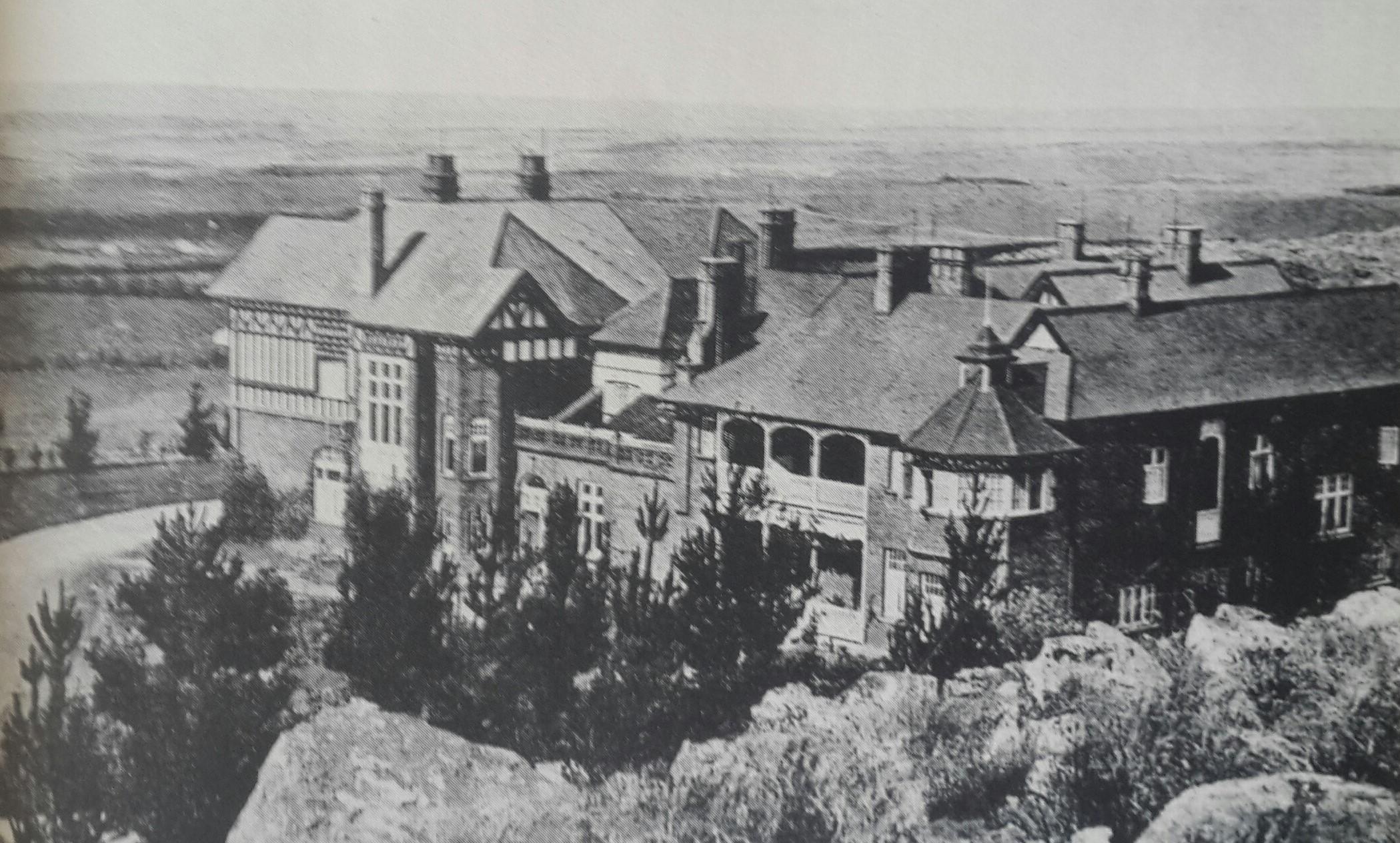 Parktown was to become the home of the flamboyant pair John and Jose Dale Lace in 1904, when they moved from Norman House in Doornfontein where the couple had lived for a short while after their marriage in London in 1893. Doornfontein in that year was settling for a libel case which arose between Henri Bettelheim and Carl Hanau over a card game played in Bettelheim’s residence in Beit Street. Norman House at the time was the home of Barney Barnato while his more palatial residence was taking shape in the suburb of Berea, established by him in 1893. Meanwhile Thomas Yeo Sherwell was developing the adjacent area into the suburb of Yeoville. 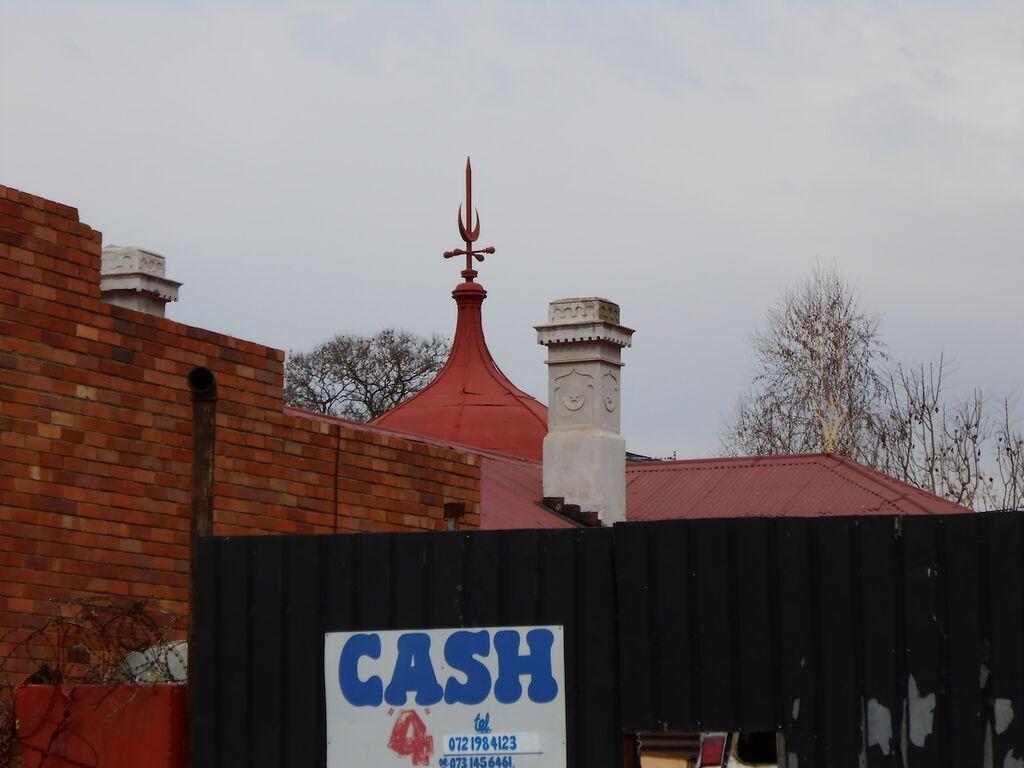 The remains of Bettelheim House (The Heritage Portal)

The town centre was growing, with a variety of buildings reaching completion in 1893, one of which was the Castle Brewery Building at 148-150 Fox Street. It was the tallest building in Johannesburg at the time and was described as picturesque despite its utilitarian nature. Other buildings that went up in 1893 included the commercial premises of the retailers Henwoods and Thorne & Stuttafords; no less than three Masonic lodges, a theatre - the Gaiety; the Magistrate’s Court on Government Square and two bridges over the railway line - a footbridge at Twist Street and a vehicular bridge at King George Street. 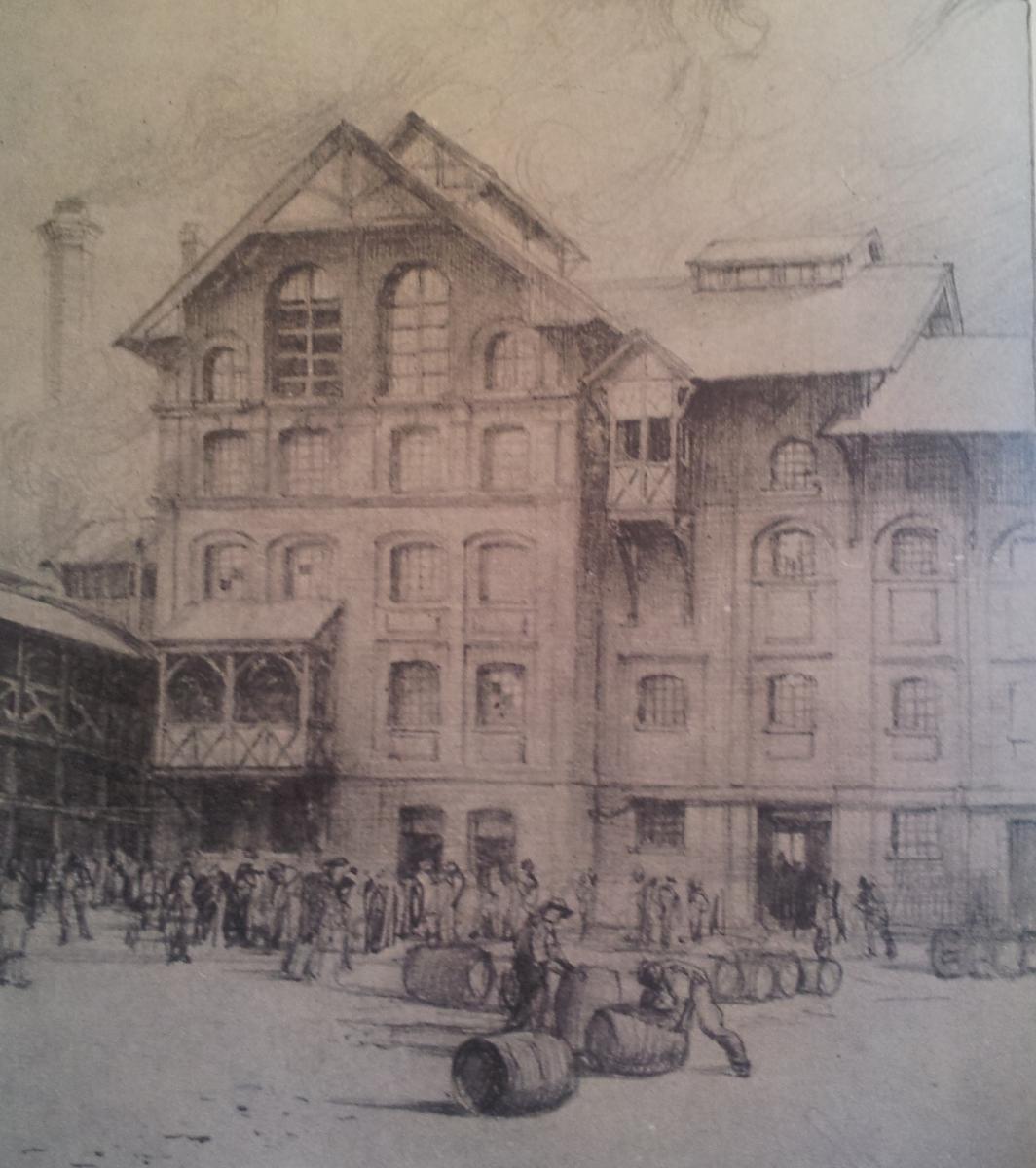 By the year end there were 97 gas lamps in the city centre and the macadamising of its streets was underway disproving FitzPatrick’s omen that grass would grow in the streets of Johannesburg!

On the outskirts of the town, lay a piece of marshy ground, which was developed into a park in 1893 - Joubert Park. It was named after Christiaan Joubert, who that year had narrowly missed defeating Kruger in the presidential election. North of the park stood the Hospital, the eastern wing was opened in 1893. 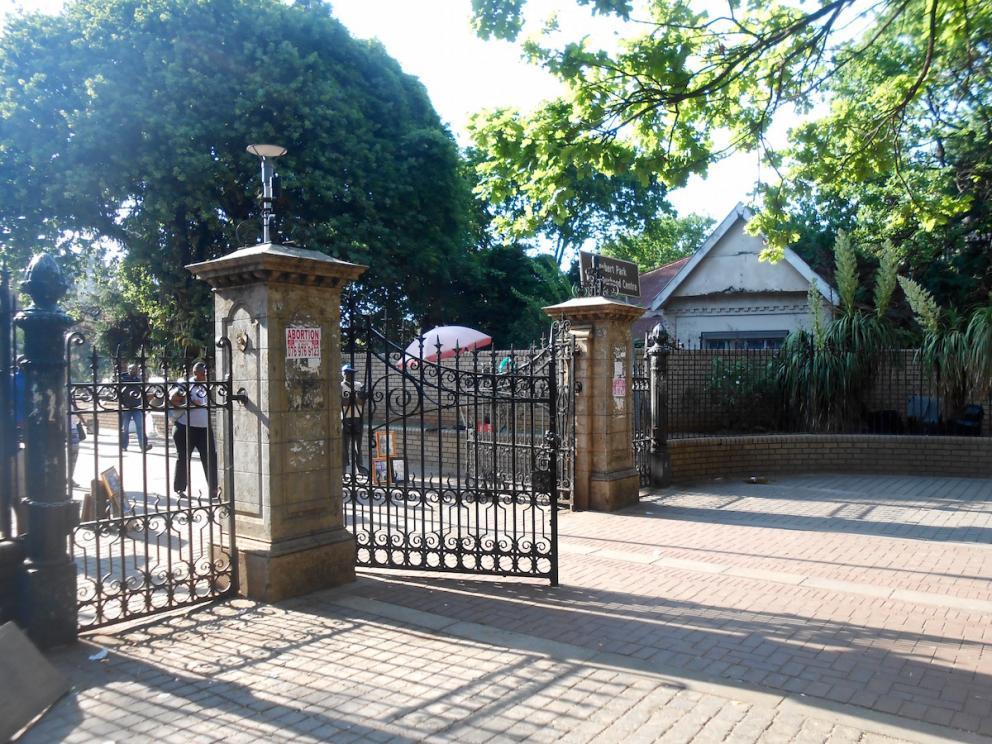 Smallpox claimed nearly 100 lives that year - the wells were unfit for drinking. The water supply problem continued to plague the Rand and from time to time there were attempts to solve the problem. In 1893 the Vierfontein Syndicate was formed to exploit the Klip River and build a dam in the Ormonde area. One of its directors was Lionel Philips, now head of Rand Mines, who backed the scheme.

During the severe drought of 1895, Solly Joel attempted to bring on the rain by sending up fireworks. Such folly was only equalled by the disastrous fireworks display held at the Wanderers in July 1893. One of the displays entitled “Eruption of Vesuvius” erupted so violently that a bomb burst and fractured the legs of two men, cut off most of the foot of a youth, broke the wrist of a lady and injured several others.

A German who manufactured his own fireworks held a display in March, which was not much more than a damp squib, causing such an uproar from the spectators that the Wanderers was forced to dissociate itself from the event. Something that may have started with a bang, but certainly ended with a whimper, was the short-lived Transvaal Argus, which commenced publication in 1893 and ceased the following year.

Such were some of the events of note in the year 1893 when Johannesburg was just 7 years old.