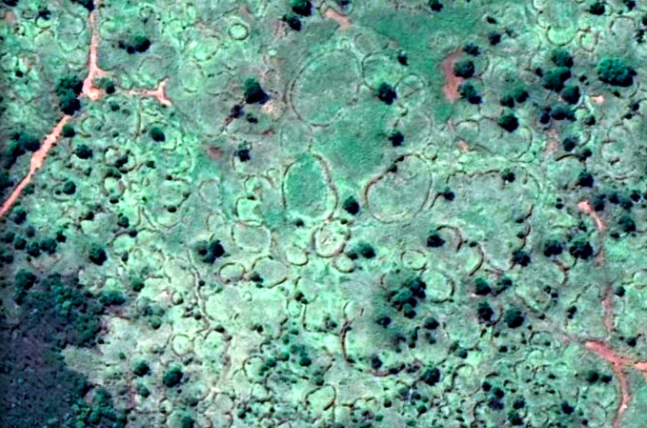 Drawing primarily on careful analysis of oral traditions, scholars are in general agreement that most Tswana communities are offshoots of the Bahurutshe, who moved southwards through what is today Botswana and established themselves along the Madikwe (Marico) River, probably in about 1500 AD (see Carruthers 2014, p. 213). The Bakwena were one of the most prominent offshoots from the Bahurutshe. By the late 17th century, there were several branches of the Bakwena, and one of their chiefs named Modimosana moved eastwards with his people into the area west of the Magaliesberg (see Breutz 1953, p. 108). Oral tradition indicates that Kgosi Modimosana had four sons: Ramanamela, Mmatau, Maake and Mmatlhaku (Breutz 1987, p. 268). By the beginning of the 18th century, Mmatau's son Sekano had become kgosi of the community (now known as the Bakwena ba Modimosana ba Mmatau), and they had settled at Molokwane along the upper reaches of the Selons River (Breutz 1953, p. 108).

Over time, Molokwane became a huge stone-walled settlement. The people living there followed the normal Tswana practice of laying out each kgoro (ward or village) according to the "central cattle pattern", with the cattle kraals of the kgoro surrounded and protected by the living areas of the people. At Molokwane, however, there were large numbers of dikgoro which merged to form what was effectively a large town. From the air, the extensive stone-walling at Molokwane is still clearly visible today.

By the late 18th century, the community was ruled by Kgosi Kgaswane, son of Sekano. The community had grown rapidly, and had spread eastwards in the valley south of the Magaliesberg at least as far as Maanhaarrand (Carruthers 2014, p. 215). The royal residence, however, remained at Molokwane. It was a time of great prosperity for Kgaswane's people, and they exercised a large degree of control over the region south of the western Magaliesberg. It is little wonder that to the European explorers in the early 19th century, the Magaliesberg was known as the "Cashan Mountains" ("Cashan" being a corruption of the name Kgaswane).

From 1981 to 1983, Dr Julius Pistorius (at that time, curator of the Rustenburg Museum) conducted an extensive archaeological research project at Molokwane (see Pistorius 1992, p. 1). Pistorius measured the stone walling as extending for a distance of 3 km from north to south, and averaging a distance of 1.5 km from east to west. According to Pistorius, Molokwane is probably the largest stone-walled archaeological site in South Africa (see Pistorius 1992, p. 17).

Pistorius carefully mapped the entire settlement (see illustration below from Pistorius 1992, p. 5). His research determined that the settlement consisted of three distinct zones, with the kgosing (dwelling place of the kgosi) located in the central zone, where the largest cattle kraals were also found.

Detailed excavation was done of a kgoro designated as SEL1 in Zone C - Pistorius 1992.png

A detailed excavation was done of a kgoro designated as SEL1 in Zone C (the most southerly of the three zones). This excavation revealed important details about the day-to-day life of the community (see illustration and notes below from Pistorius 1992, p. 69) 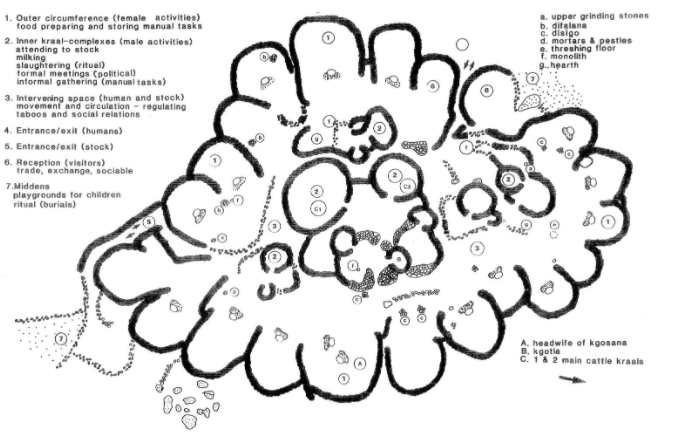 The above illustration emphasises the importance of cattle to the community, with the cattle kraals being securely located in the centre of the kgoro. This was also a zone of exclusively male activities, which included tending to the cattle, milking, ritual slaughtering of cattle and formal meetings of the male members of the community. The outer ring of the kgoro was the zone of female activities, which included preparation and storage of food, construction of houses, and caring for children.

The excavation yielded many artefacts which shed light on daily activities in the kgoro. These included iron, stone and bone tools, and fragments of pottery (Pistorius 1992, p. 36). Clay figurines of cattle, miniature pottery items and miniature clay replicas of Tswana shields were found in middens (refuse heaps). These almost certainly were the toys of the children in the kgoro (Pistorius 1992, p. 40). All of these artefacts point to a settled and relatively peaceful existence which the people at Molokwane enjoyed for an extended period of time.

This is not to say that there was no conflict with other Tswana communities in the area. Oral tradition records that several battles were fought between the Bammatau and the Bafokeng, who lived just over the Magaliesberg from the Bammatau. During one of these battles, Kgaswane was stabbed in the thigh by Sekete, kgosi of the Bafokeng, and Kgaswane in turn stabbed Sekete in the knee (see Breutz 1953, p. 110).

This conflict with other Tswana groups pales in comparison, however, with the destruction which was wrought when the Ndebele under their king Mzilikazi invaded the Magaliesberg region in 1827 (see Carruthers 2014, p. 215). The Ndebele invasion and occupation of the Magaliesberg will be discussed in more detail in a future article. The Ndebele drove the Bammatau from Molokwane and the town was destroyed, never to be occupied again. Kgosi Kgaswane, by now about 90 years old, was killed by the Ndebele (see Breutz 1953, p. 111), and the remnants of his people fled in a south-westerly direction, with some of them settling far to the south in the area which was later known as the Orange Free State (Breutz 1953, p.112). It was a tragic end for Kgosi Kgaswane; under his reign the Bammatau at Molokwane and elsewhere had prospered, and his reign had lasted for more than 60 years.

Main image: A small section of the stone walling at Molokwane, as seen on Google Earth. The longest diameter of the large cattle kraal at top centre is about 50 metres.