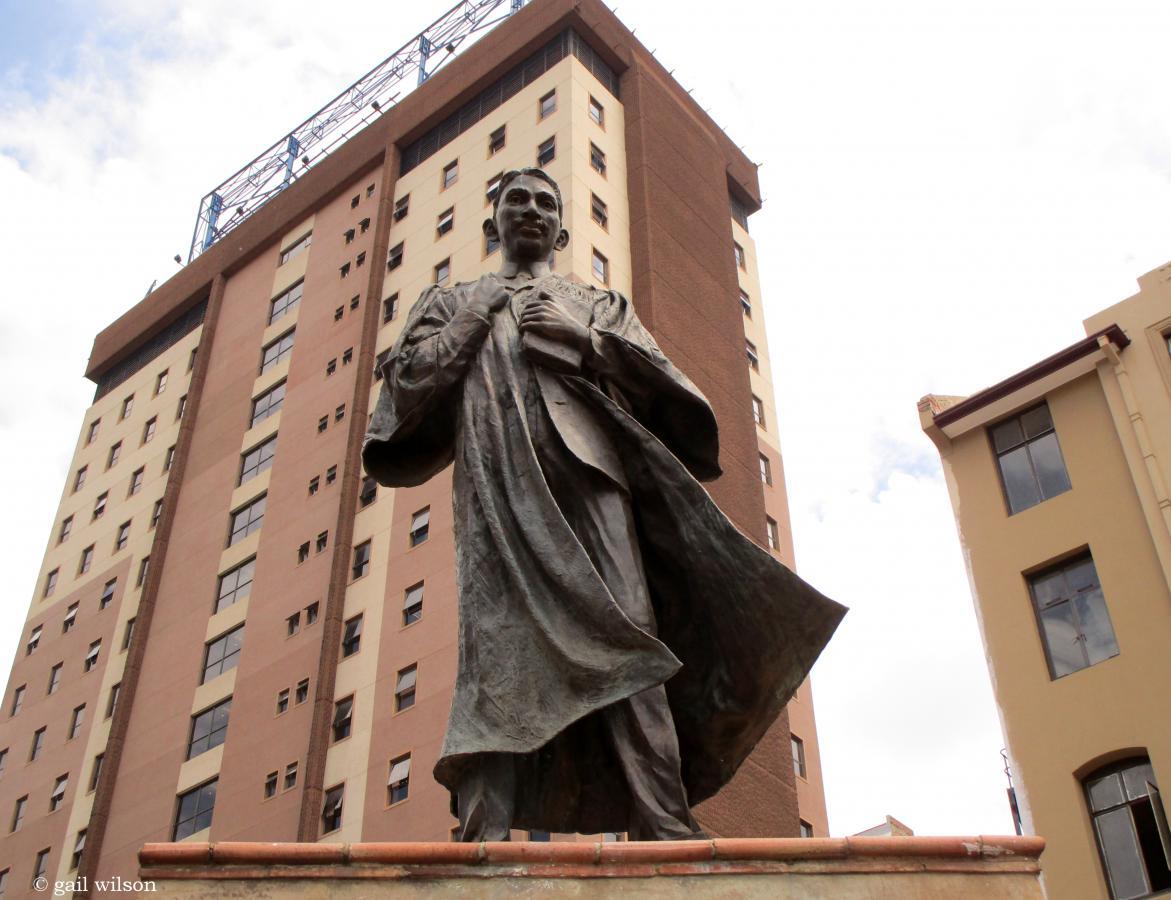 In a test of Mohandas Karamchand Gandhi’s reputation and approval rating in South Africa, a motion to remove the name and statue of the Indian leader from the city centre was debated in recent weeks by the Johannesburg City Council, the country’s largest municipality. The motion called for the removal of the bronze statue at Gandhi Square — sculpted by Tinka Christopher, it depicts Gandhi as a young activist lawyer in his legal gown — and the re-naming of the site after Sophie de Bruyn, a well-known anti-apartheid activist. 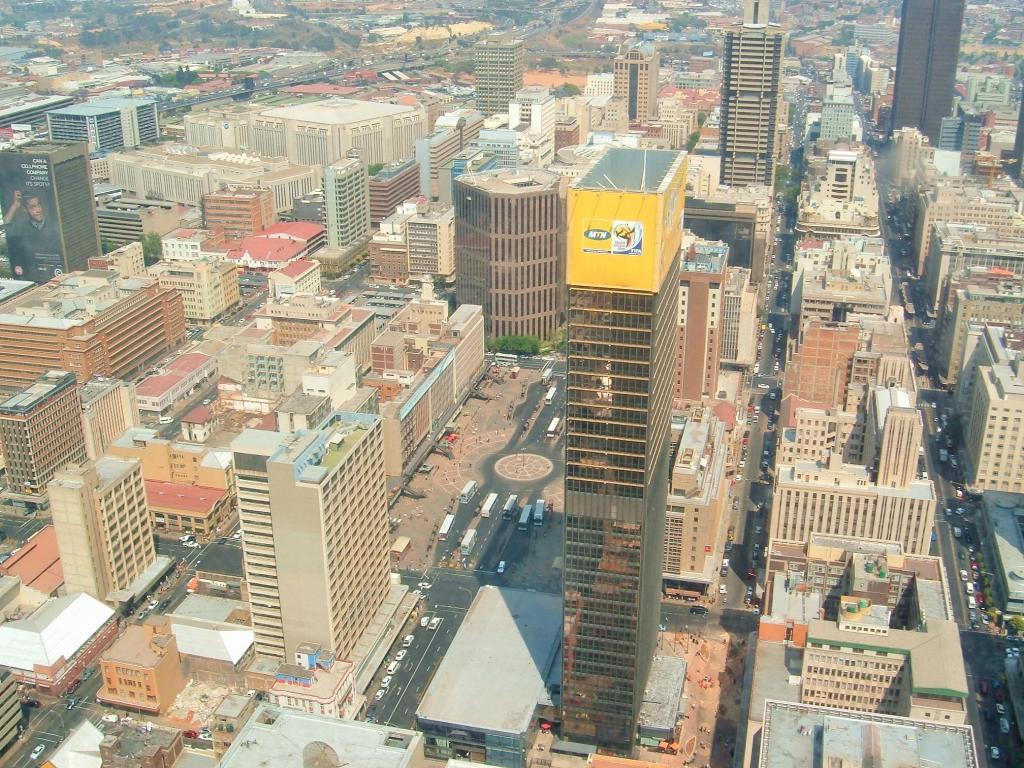 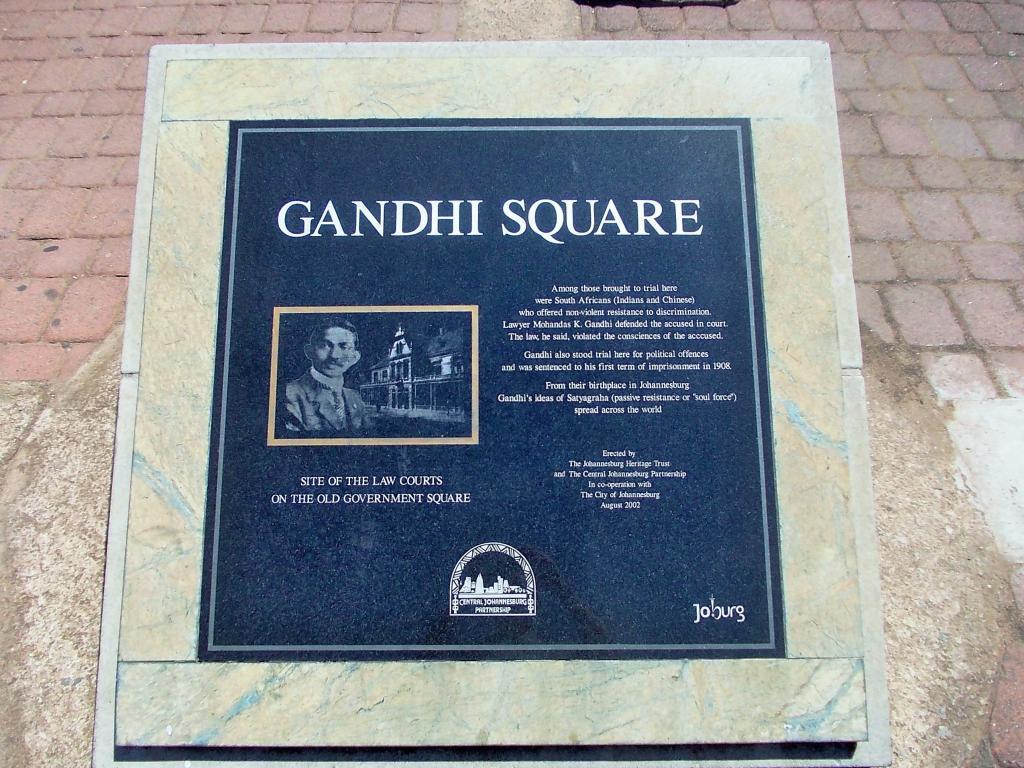 Previously called Van der Bijl Square, the site was officially named Gandhi Square in 1999; the statue was added by the city authorities in 2003.

The motion was tabled by the Economic Freedom Fighters (EFF), the third-largest political party in South Africa, which is often known for highly-charged populist rhetoric, and fierce denunciations of political opponents. The motion cited “racist utterances” made about African people by the young Gandhi during his stay in South Africa, without doing justice to the context of the time.

Nonetheless, in framing the anti-Gandhi motion, the EFF sounded a softer note, and gave some credit to the Indian leader. “The EFF also notes the role played by the globally recognised peace icon, Mahatma Ghandi [sic] who lived in South Africa for 21 years, and how central he was in fighting for the rights of the oppressed and marginalised Indian people,” said the statement.

“We have also taken into account the journey he travelled into understanding himself and that of the local people,” EFF Councillor Silumko Mabona wrote. “We also acknowledge that he was a reformed racist who changed his view based on the fact that he had insufficient knowledge of life that our people were subjected to.”

In this view, Gandhi is branded as a “reformed racist”, who – despite having positively transformed and shed his early prejudice against Africans – does not deserve to be forgiven.

Gandhi arrived in South Africa in 1893 at the age of 24, as an inexperienced Indian colonial lawyer who shared many of the prejudiced views of Africans which were then current. Speaking at a public meeting in what was then called Bombay after three years in South Africa, his words were harsh and contemptuous towards Africans: “Ours is one continuous struggle against a degradation sought to be inflicted upon us by the Europeans who desire to degrade us to the level of the raw Kaffir whose occupation is hunting, and whose sole ambition is to collect a certain number of cattle to buy a wife and, then, pass his life in indolence and nakedness.”

Later, there was a definite widening in Gandhi’s outlook, and a growth in his understanding.

The place now known as Gandhi Square was the site of the law courts, where Gandhi practised as an attorney in the early 1900s. Much of his professional and political activity revolved around the law courts, where he appeared first as an attorney and then as an accused in political trials. Gandhi lived in Johannesburg from 1903 to 1913, and this was a formative period during which time he developed the philosophy of satyagraha. 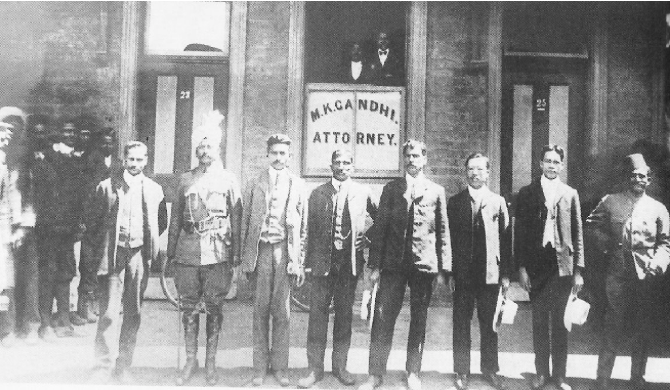 In his landmark speech to the Young Mens’ Christian Association, delivered in Johannesburg on May 18, 1908, Gandhi spoke of his vision of an inclusive, multi-racial society in South Africa: “If we look into the future, is it not a heritage that we leave to posterity that all the different races commingle and produce a civilisation that perhaps the world has not yet seen?”

After the EFF’s motion, the stage was set for a debate involving the two main parties in the Johannesburg City Council - the Democratic Alliance (DA), which leads a coalition administration, and the opposition African National Congress (ANC). However, the two parties set aside their differences and opposed the motion.

Clr. Belinda Echeozonjoku, a DA councillor, gave a stirring speech, highlighting the profound contribution made by Gandhi to fighting for the rights of the marginalised and oppressed, and how he prepared the way for many other activists of all races in the liberation struggle against apartheid. “Removing the statue is not only about Mahatma Gandhi,” argued Clr. Echeozonjoku, “but it is also denying the rights and dignity of all races, including Indians like Ahmed Kathrada and Ahmed Timol to be honoured for the role they played in the struggle against apartheid.”

Clr. Geoff Makhubo, leader of the ANC in the council said that the history of Gandhi is intertwined with the history of South Africa, and of the national liberations struggle. We must “avoid divisive motions,” he said, adding that veteran womens’ leader and ANC stalwart Sophie de Bruyn “had not been consulted about the motion”, and she did not support the re-naming of Gandhi Square.

On August 23, the motion was put to vote and roundly defeated 226 to 20, with no abstentions.

Anti-apartheid icon Nelson Mandela was well aware of the racist statements made by Gandhi when he was young. He wrote in an article published in 1999: “All in all, Gandhi must be forgiven those prejudices and judged in the context of the time and circumstances. We are looking here at the young Gandhi, still to become the Mahatma, when he was without any human prejudice save that in favour of truth and justice.” 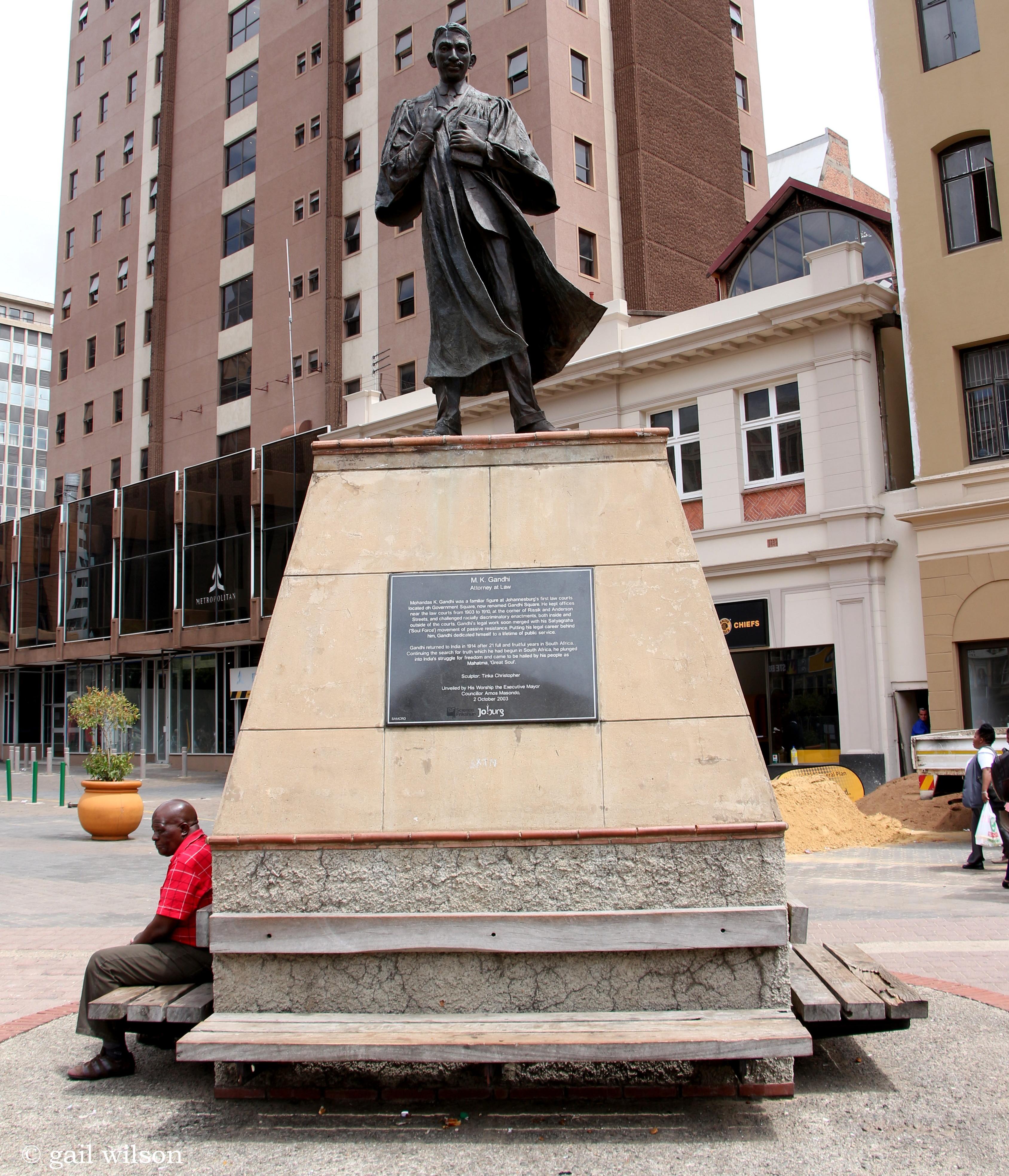 Another shot of the Gandhi Statue (Gail Wilson)

This article originally appeared in the Hindustan Times. Main photo via Gail Wilson.

About the author: Eric Itzkin is the author of Gandhi’s Johannesburg: Birthplace of Satyagraha, and the Deputy Director: Immovable Heritage for the City of Johannesburg. He writes in his personal capacity.