The Destruction of the Bezuidenhout Valley War Memorial 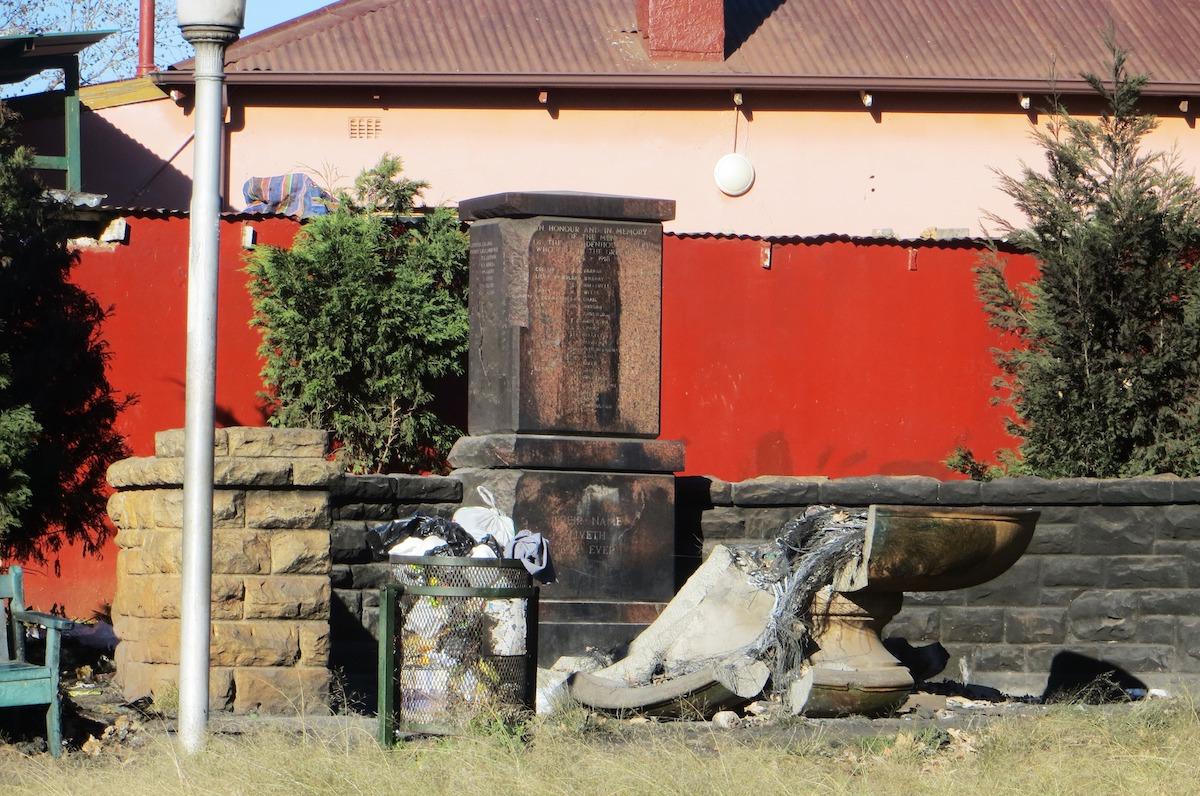 On Saturday morning 16th June 2018, I attended a Johannesburg East Plans committee meeting. Our work is about heritage preservation while considering appropriate changes and new developments. Isabella Pingle, the representative of the Kensington Ratepayers and Residents Association, placed a photo before us showing the damage recently done to the Bez Valley World War I Memorial. The Memorial has effectively been destroyed despite the recent efforts of the local councillor Carlos Da Rocha and the community to clean the small park. In late 2014 an effort was made by City Parks, the Johannesburg Heritage Foundation and others to revamp the memorial. It is one of those Johannesburg heritage spots that has been hanging on by its finger nails. The challenges of preservation have overwhelmed the City of Johannesburg. 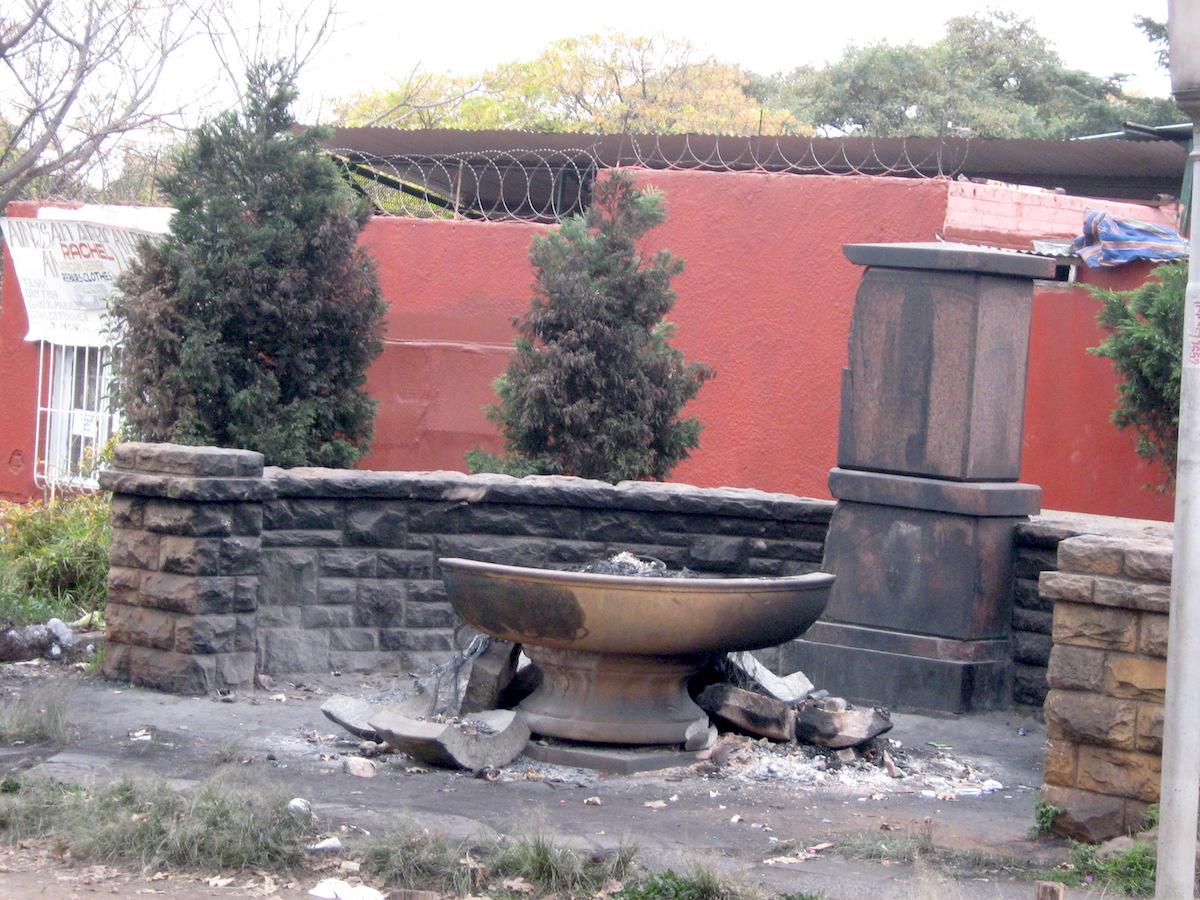 What is left of the Bez Valley War Memorial (Isabella Pingle)

This small local memorial is located opposite Darras Centre on the boundary edge of the suburbs of Bezuidenhout Valley and Kensington. The address is the corner triangle where 5th Street, 9th Avenue and Kitchener Avenue intersect. The  memorial is a block away from the main thoroughfare - Albertina Sisulu Road. It is a triangular patch of park land that falls within the orbit of the City Parks of Johannesburg. 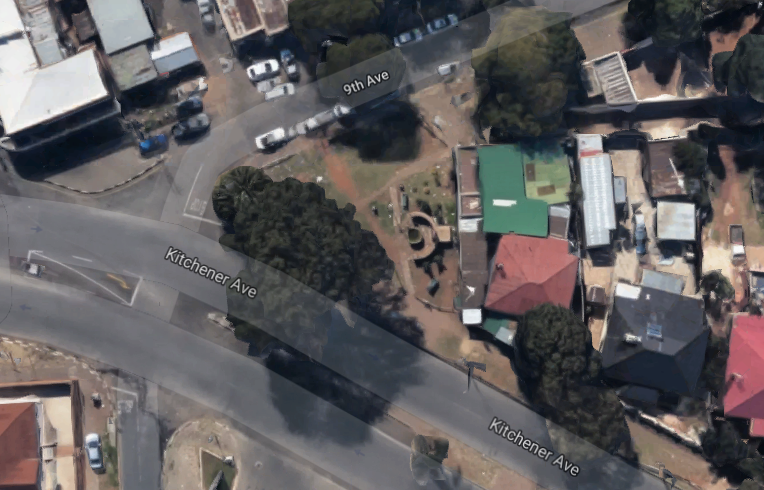 Location of the Memorial (Google Maps)

After the meeting I visited the Memorial and it appears as though it is now hopelessly beyond repair. There is very little left to save. This is so very sad and a great loss to Johannesburg. My presence at the park was not welcomed so I remained in the car. I was shouted at by men with beer cans in their hands.

The grass in the small park grows rough and rank. Litter is scattered throughout and there are no flowers. Evidence of fires started by vagrants is everywhere including against the panels of names on the granite block and in the bowl of the fountain. The fires have caused the stonework of the memorial fountain to split and collapse. The flames have caused damage to the names on the panels and the beautiful hand shaped rocks of the wall are blackened by soot and ash. It is a dismal and dreadful scene. The surrounding small shops show people scratching a living as best they can - liquor, cigarettes, sweets, the odd loaf of bread, food cooked on braziers. Surprisingly, the few trees donated and planted by Flo Bird in 2014, meant to screen and protect the memorial, are flourishing and have grown from their sapling status. 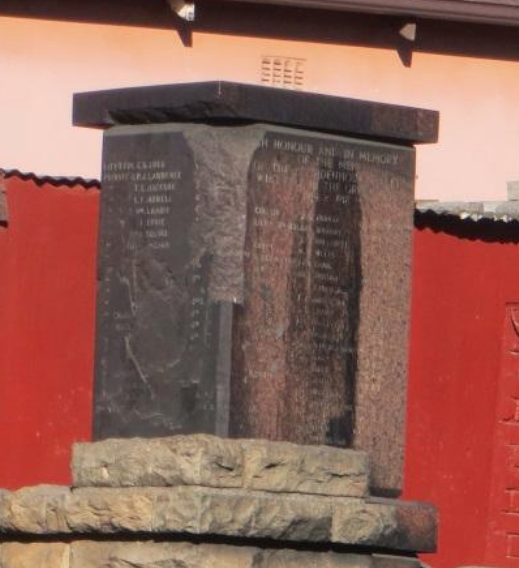 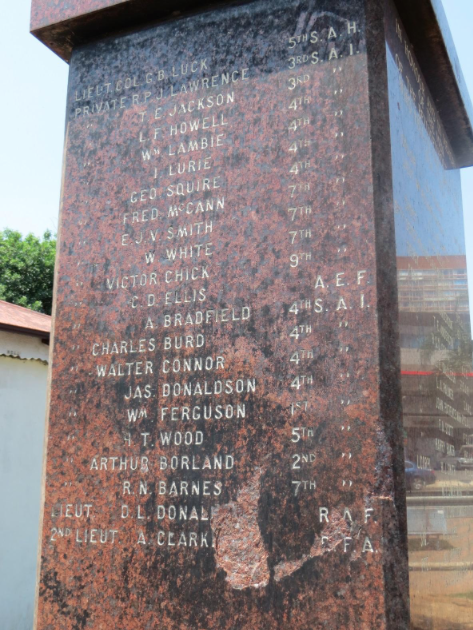 The rust coloured back garden walls of the adjoining properties look cheerful. It is interesting that Kitchener Avenue is a socioeconomic dividing line. Darras Centre (a modest but well patronized shopping centre in Kensington) and Juno Ridge (a smart apartment block) are located on one side while the neglected park is on the other.

Here is a case study in the failure of city management, the failure of policy, a failure of policing and ultimately the failure of South African society. As in the case of other parks and cemeteries such as Rhodes Park and the Brixton cemetery, City Parks seems to have lost the battle. It simply does not have the resources, the willpower or the funds to address the deep problems of city decay, homelessness, human degradation, vagrancy and social collapse as these problems interface with the parks. The state of the War Memorial at Bez Valley is a casualty of a failing state at city level. Strong words but I am angry.

I am well aware of efforts made by Councillor Da Rocha to clean up the area (click here for details) but a clean up could not save the Memorial. There have been calls for the local community to care for the memorial but it is beyond the authority of local residents to evict or offer houses to vagrants who have made the park their abode.

We have failed and the city has failed us and the men of 1914-18. “Lest We forget” has a  hollow ring. A century later the city of Johannesburg has forgotten. The better epitaph is now ‘best we forget'. Those of us who wish to remember must turn to military history books and to online memorial sites to find the spirit of the sacrifice of the First World War. 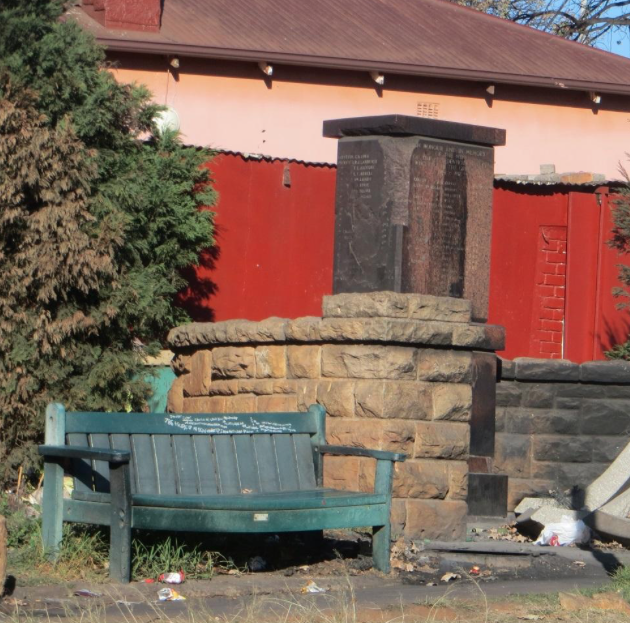 We have failed and the City has failed us (Kathy Munro)

I hope I am wrong and that the Bez Valley War Memorial can be rescued. Perhaps the City can restore it and at the same time ensure that it is protected. This could involve sensitive fencing, resettling vagrants and regular maintenance. It will require willpower, a budget and an authority to act. The alternative will be to rescue what can be saved, restore it, place it at a local school or church and hand it over to the private sector and the civil community.