Concerns over Longest Avenue of Oak Trees in South Africa 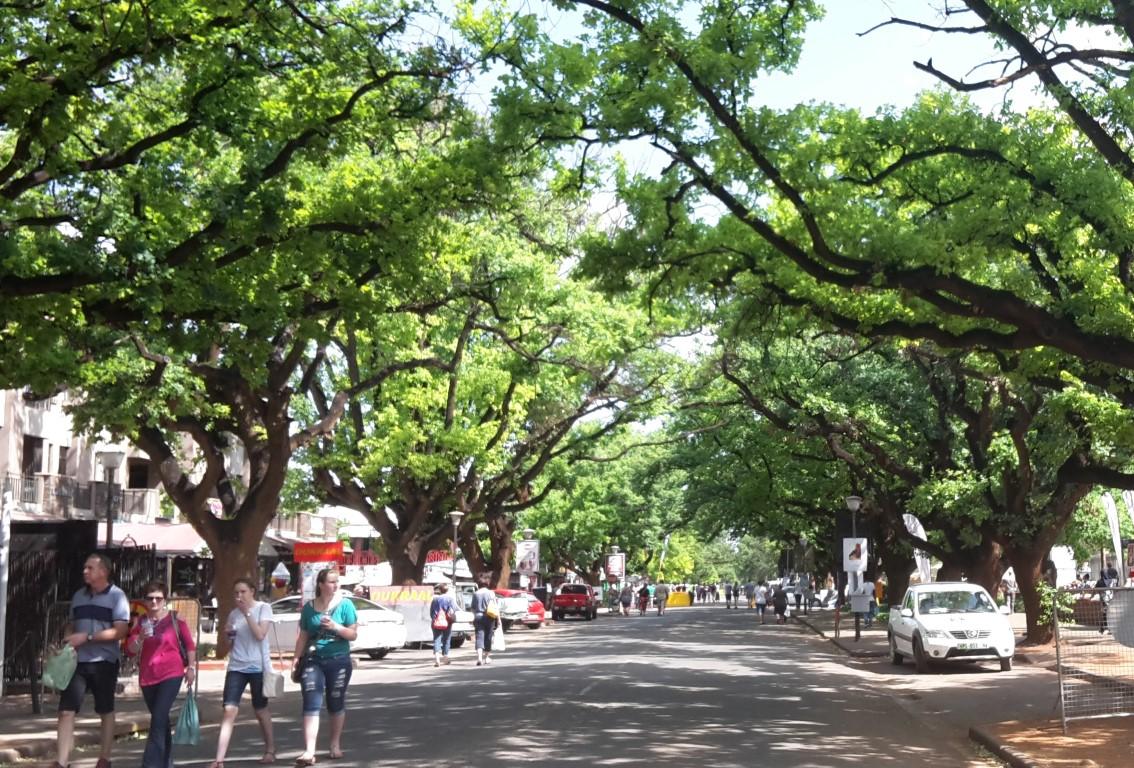 Potchefstroom is home to the longest avenue of oak trees in South Africa. The grand oaks stretch for almost 7km and contribute to the character and beauty of the city. Recent research indicates that the number of trees has declined from 710 to 530 and certain sections are in a deplorable state. In the article below Lennie Gouws explores the history and current state of iconic Oak Avenue.

In 1977 the whole town was up in arms when plans were underfoot to uproot part of the Oak Avenue. The Potchefstroom Teachers Training College applied to have a part of Hoffman Street closed, due to the fact that it divided the campus of the College, after a new administration building was erected west of Hoffman Street, whilst the rest of the campus was on the eastern side of the street.

This meant that the street directly to the east of Hoffman Street, Tom Street, had to be widened to accommodate increasing traffic. In order to do so the trees had to be removed.

According to Richard Ingram, editor of the Potchefstroom Herald at the time, the newspaper was inundated with letters on the matter and the Herald launched an editorial campaign to preserve the trees.

A public petition was drafted and signed and led to the avenue being declared a National Monument. According to the proclamation of this heritage site, the Oak Avenue “lends to the streets along which it is situated both dignity and aesthetic character.” 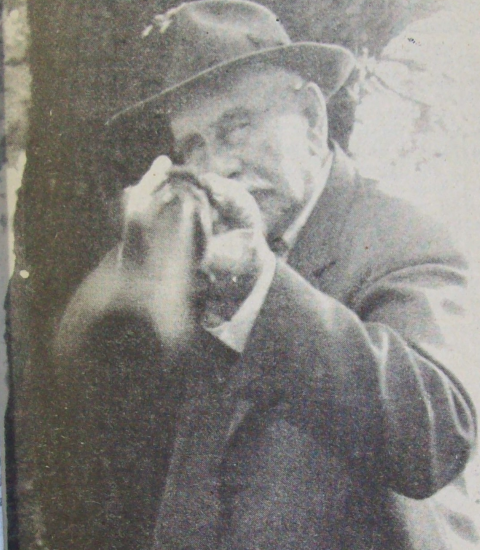 This photograph of Mr Sarel Yssel appeared on the front page of the Potchefstroom Herald of 21 February 1975 after he threatened workers who wanted to cut down oak trees growing along his property just north of the North Bridge with shooting. This photograph embodies the emotions that residents of Potchefstroom experience concerning threats to the oak trees. (Photo: Herald)

The first oak trees were planted in Potchefstroom in September 1863 on the property of President MW Pretorius. The trees now encompassing the historic Oak Avenue were planted in 1910 following a decision by the Town Council spearheaded by BR (Reuben) Gericke.

The trees were planted along the route that Mr Gericke travelled each day to go to work at the Agricultural College. On 20 August 1910, the Town Council took the decision to plant the trees from the Dam (then called the “Reservoir”) along Tom and Berg Street (currently Steve Biko and Peter Mokaba Avenue), Retief Street and Kruger Street (Beyers Naudé), up to Potgieter Street (Nelson Mandela Drive). The plantings were later extended along Kruger Street, Wolmarans, Kock and Botha Street (Chris Hani) to the entrance of the Agricultural College. 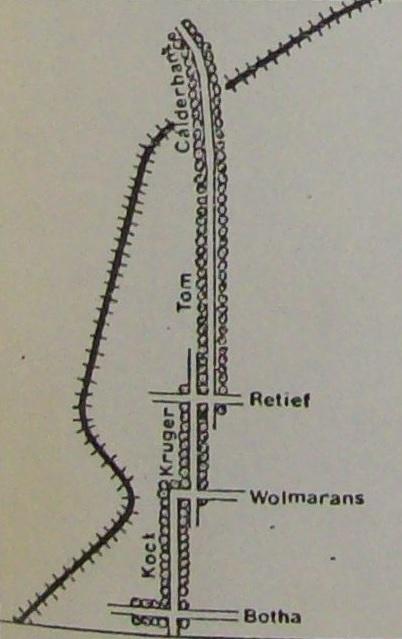 The map created by the National Monuments Council when the oak avenue was declared a national monument. (Photo: Potchefstroom Museum)

Gericke also offered to supervise the planting of the trees. Mrs. Tina Jooste later recalled that she, as a young girl, saw how Mr Gericke and a worker watered the young oak trees from the nearby water furrows that ran along the streets of Potchefstroom.

The death knell for the trees rang in October 1972 when the extensive furrow system of Potchefstroom was closed down.

A sharp decline in their condition became apparent after 1980 and a study was conducted from 1988 to 1991 by Dr Leon van Rensburg of the Botany Department at the Potchefstroom University and Prof Huib von Hamburg of the Zoology Department. Dr Van Rensburg found that the main reason for this was a decline in available ground water. When the trees were planted in 1910, part of the furrow system ran along the whole length of the oak planted streets, contributing to the ground water.

By 1980, sidewalks on the streets along which the oak trees stood, were extensively paved over. A storm water system efficiently removed rain water, decreasing ground water. This and the densification of specifically the Bult area have all led to a drastic shortage of enough ground water.

One of the measures that was taken by the city council was to install an irrigation system along the 6,84 km length of the Oak Avenue. By 1999 it was found that in spite of this, damage to the trees still occurred. This system has since fallen into disrepair and the trees are again deprived of enough water.

Another factor contributing to the demise of the trees was an infestation of scales (Asterolecanium quercicola: Hemiptera: asterolecaniidae). Scales came to South Africa from Europe and therefore do not have natural enemies which could contribute to keeping this infestation in check. Appearance of the scales was first reported in 1951. Prof Huib von Hamburg said in 1995 to the Herald that the scales have the effect that in autumn the leaves would not drop off the trees, which prevented new buds from forming in spring, prohibiting growth.

In 2014 a group of researchers from the Botany Department of the North-West University, Potchefstroom Campus, reported on a five year project to monitor the physiological status of the oak trees.

Another threat to the trees developed with the large and extensive building projects in the Bult area. Large areas under the trees were paved, which lead to the compacting of the soil. This caused the leaf water potential to lower and endangered the health of the trees.

The study found that in only one year of monitoring it could be ascertained that the leaf water potential of trees growing in areas where there are gardens around them, were higher.

Some developers have installed irrigation systems around the trees, which contribute to more ground water available to the trees, but in other areas extensive pavements and pure neglect are killing the trees. 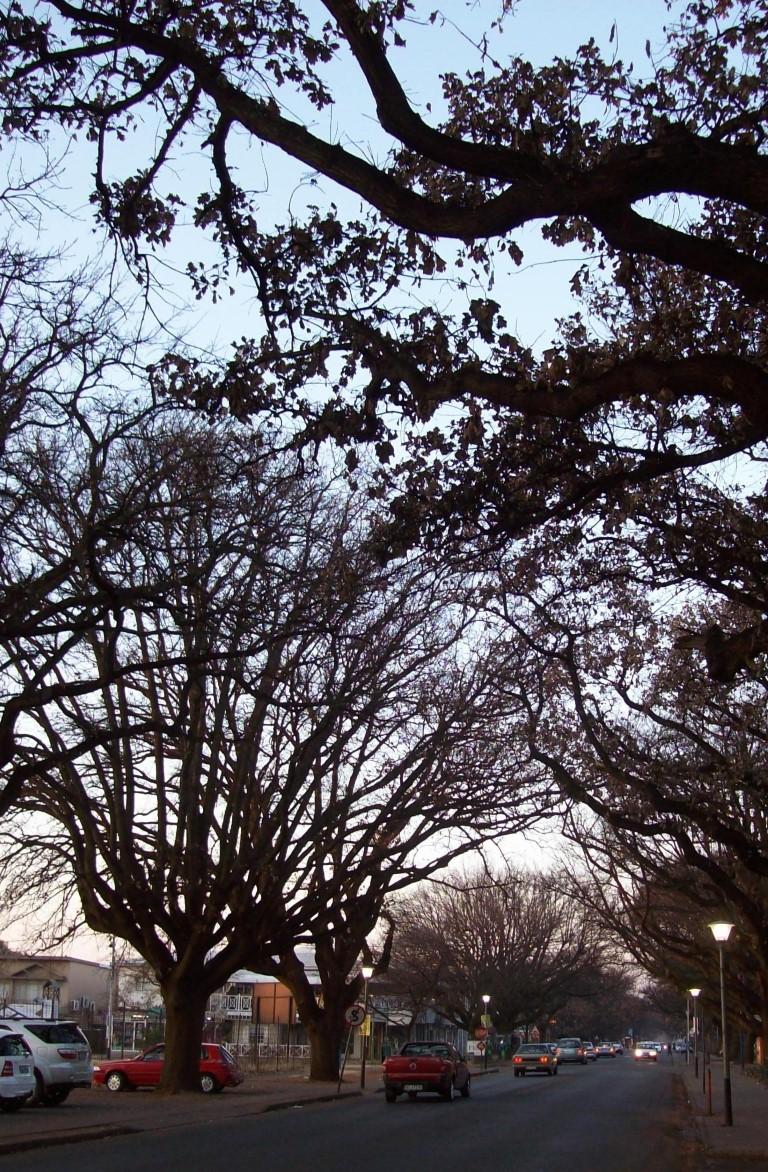 This article was originally published in the Potchefstroom Herald. It is republished here with the kind permission of the Editor.