1889 must have been a good year for visiting South Africa. I recently found and wrote about Frederick Young’s Winter Tour of South Africa in that year (click here to read). Stanley Leighton was another English visitor to South Africa in 1889 and here is another invaluable source of impressions and vignettes of places visited by a traveller of a certain class. He did not have a political agenda nor was he pushing a particular viewpoint.

Spine and cover - Notes on a visit to South Africa - Stanley Leighton.png 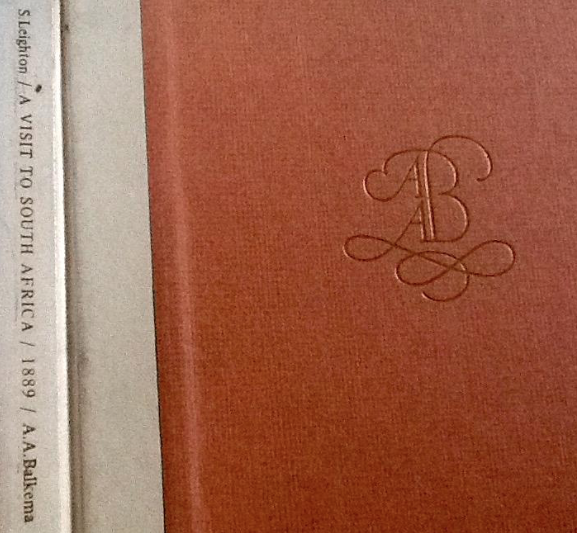 Spine and Portion of Book Cover

Leighton was a lawyer and Member of Parliament in England. He was born in 1837 and studied law and modern history at Oxford. He became a barrister but retired from the bar at the age of 30. Thereafter he travelled extensively. He was elected to Parliament in 1876 and represented two constituencies until his death in 1901. Leighton, his wife Jessie and her maid Mardel travelled to South Africa on the Royal Mail Ship, the Drummond Castle in January 1889. The purpose of his journey was to broaden his mind and gain a first-hand knowledge of South Africa by meeting and talking to people of all walks of life. Leighton kept a handwritten journal of his travels. Although a typescript was produced (when and by whom we do not know), the journal of a fascinating adventure that stretched from February to April 1889 was not turned into a travel book at the time (unlike Young’s book).

The appeal of this small volume published by A.A. Balkema in 1975 is that it was written by Leighton as a personal record for his own pleasure much as one would keep a diary. There were no dates to his journal entries and here the excellent editor, Antony M Lewin Robinson, has worked out the Leighton itinerary, based on the series of sketches which were part of the manuscript and were dated. There are 30 pencil sketches, all of them of buildings or of landscapes and buildings (the buildings are utterly charming).

Sketch of the "The Lodge" at Kimberley

Hence this small volume is an almost overlooked treasure as it is an architectural record of the built colonial scene in 1889. In addition, the journal is a perceptive commentary on the sights and political events and travel experiences of an adventurous trio. Leighton is interested in people, the origins of towns, domestic living arrangements, entomology, the exigencies of coach and early rail travel and so much more.

In brief, the Leightons visited Cape Town, Knysna, Port Elizabeth, Grahamstown, Kimberley, Johannesburg, Pretoria, Pietermaritzburg and Durban before returning to PE and Cape Town via sea. Travel in those days had to be leisurely and they were guests of the significant players of the day. They were entertained and passed on to acquaintances and friends of friends. Introductions mattered.

1889 was a good year. South Africa was at peace. There were two British colonies, Natal and the Cape Colony (Kimberley had been incorporated into the Cape after the Keate Award). The two Boer republics of the Free State and the Zuid Afrikaanse Republic (ZAR) were independent and reaching a level of maturity with their own identity and architectural styles in the small capital towns of Pretoria and Bloemfontein. Technological progress in the form of railways was beginning to knit South Africa into a coherent whole, economically if not politically. Carnarvon’s plan for a unified South Africa had failed, but the railways brought the possibility of economic unity and advancement. The iron track had begun to penetrate northwards and it was possible to reach Kimberley by rail. Port Elizabeth and Grahamstown and Durban and Pietermaritzburg were linked by railway lines (fairly short distances) but there were separate railway ownership and operating models in the different parts of South Africa, in Natal and the Cape. This was the year the Cape Government Railways placed a bulk order for 24 American type tender locomotives for passenger service. Railways were the transport mode of the future. In the Transvaal (the ZAR) the NZASM company established in 1887 had progressed with the Rand Tram from Johannesburg to Boksburg, while the railway line from Lourenço Marques to Pretoria was projected as a venture to give the Transvaal access to the sea independent of British interests. 1889 was the year that the British South Africa Company was granted a Royal Charter and Rhodes forged ahead with dreams of a British presence in Africa linking Cape to Cairo by rail. The first Anglo-Boer War of 1881 had resulted in a Boer Victory and a peace of sorts but terms such as suzerainty gave Britain the upper hand in external relations.

Johannesburg was a mere two going on three years old. Leighton gives us a wonderful description of the mining camp on its way to becoming a town:

Johannesburg is two years old. If you keep on saying this to yourself and then look at the long, stretching, broad, sandy streets, at the low irregular houses, at the huge market place, at the post office and government buildings, at the endless succession of detached houses nearly all with corrugated iron losing themselves in the distances as far as the eye can reach; looking upon all this and repeating to yourself that two years ago there were no houses, but only a few tents, here; it is impossible not to wonder at the metamorphosis.

A little later he adds: “...the iron houses of the first Johannesburg which took the place of the canvas town are now giving way to buildings of brick and plaster and stone. All the trades which are required to support the population of 30 000 are flourishing.“

Leighton is quick to perceive that the Witwatersrand gold field is not a poor man’s digging, where each digger can work by himself. He notes that companies had the capital to invest in quarrying and crushing the quartz and that there was speculation in the mining shares of these companies. Share dealing made and lost fortunes overnight. He records his visits to two mines, the Worcester mine and the Langlaagte mine and observes that the Boers’ pastoral way of life was giving way to a commercial and energetic population. He highlights that fortunes were being made by Robinson, Barnato and Rhodes and that prominent Cape men had migrated to Johannesburg – men such as  Scanlon, Merriman (Cape political figures), Lennard (once Cape Attorney General), and Sauer. Johannesburg in 1889 was a busy place.

Leighton sums up the changing scene: "From being a poor country with few rich men, South Africa now promises to become a rich country with a number of men who may compete with the millionaires of the world."

Leighton captures something of the frenetic pace of Johannesburg. Everyone is into speculation: share lists are the big almost only topic of conversation; the Rand club is crowded with a queue for dinner. Meals at hotels are scrambles for food. Coach seats from Kimberley to Johannesburg are booked out. Prices for food, lodging, cigars, and drink are sky high. He attends the laying of the foundation stone at the Johannesburg Hospital. General Smidt, the Vice President of the Republic, lays the stone with speeches in English translated into Dutch and then Smidt replies in Dutch translated into English. The hot topics of the day for Johannesburg in 1889 were the railway question (i.e. a rail link to Pretoria and Kimberley) and the granting of Municipal institutions and status.

Leighton’s parting shot on Johannesburg is the issue of public health in the town and the high death rate from typhoid fever because of insanitary conditions. In 1889 there were no street lights. Leighton relates returning to the Rand Club and being shown the way on a dark night by Dr Hans Sauer (for whom Sauer Street was named) armed with an open pocket knife ready for any possible assault and attack to one’s back. Unfortunately there are no Leighton drawings of Joburg.

I have concentrated on the Johannesburg section but each vignette of each town visited has an authenticity of a first-hand account. At the Du Toits Pan mine (Kimberley) he describes thousands of miners leaving work, hauling diamondiferous ground from the deep pit below, moving Indian file along zig zag paths and looking like ants. As Leighton moves through the country much of his writing is about the recent (on his time scale) dramatic events of the 1881 short war (the First Anglo Boer War) and the disaster that fell upon Colley at Majuba.

This is one of those books to savour and take yourself on a journey through South Africa in 1889. The editor Antony Lewin Robinson, was the director of the South African Library from 1961 to 1981. He was responsible for the acquisition of some of the original Lady Anne Barnard letters for the library and edited the Van Riebeck Society volume of the Barnard journals at the Cape. He also edited the Le Vaillant journals. In the case of this small volume of travel he has provided well researched end notes to give context and explanations, plus there is a solid index.

This book came as a manuscript to the South African Library in Cape Town and hence was published for the Friends of the South African Library. It was Leighton’s daughter, a Rachel Frances Marion who presented the family’s leather bound typescript of the journal the library. It’s a highly desirable book for any collection of Africana and for anyone interested in Johannesburg or Pretoria history.

It is also worth adding something about the publisher, A. A. Balkema (1906-1996) as this book has all the hallmarks of his publishing style - non justified text, quality paper, generous margins, beautiful typography, well set out illustrations and the distinctive AAB colophon on spines and covers of his publications.

AAB colophon - A A Balkema publisher.jpg 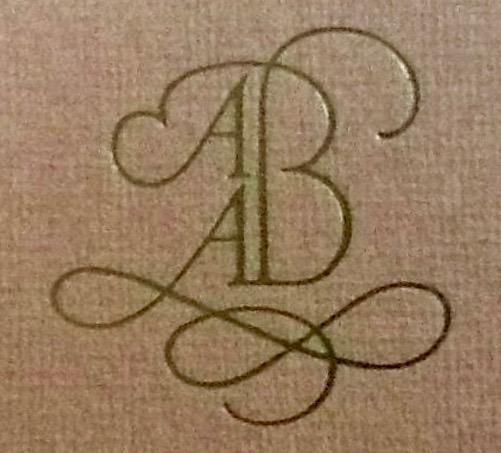 August Aimé Balkema was a Dutch publisher and bookseller who emigrated to South Africa from Amsterdam in 1946. He returned to the Netherlands in the 1980s but in a 40 year publishing career in South Africa (he settled in Cape Town) he made a major contribution to Africana publishing and many of his books are collectable classics because of the serious approach to subject matter combined with elegance in book design. It has been said that he single-handedly transformed the publishing industry in this country. He published many unusual non-fiction titles in history, architecture and literature in both English and Afrikaans. He was included in a list compiled in 1999 of the 100 most influential people in South Africa in the 20th century. There are interesting articles about Balkema on Wikipedia and on SAHO.