The South African Saturday Book - A Collection of Curiosities

Review of the South African Saturday Book. By Eric Rosenthal and Richard F Robinow. No date but published circa 1948 to 1950. Hutchinson. London, illustrated 224 pages.

This book describes itself as “a treasury of writing and pictures of South Africa, old and new, homely and Extraordinary”. It was a Christmas celebratory anthology clearly produced for the post Second World War book market in South Africa. It is a curious book and for that reason is collectable, because it offers a selection of some unusual ephemeral writing. It was modelled on the British The Saturday Book which was published as an annual between 1941 and 1975  (a series of 34 books) edited initially by Leonard Russell and then from 1952 by John Hadfield. The British Saturday book had a charm and was well produced. Later volumes were handsomely boxed and when the series had run its long course a further volume was published in 1981 called the Best of the Saturday book. The series of the original Saturday book is collectable but has lost popularity in the book market and individual volumes can be purchased for a few dollars.

In contrast the South African Saturday book was a poorer colonial cousin; it was a once off and one presumes that sales were not impressive enough to lead to a publishing bonanza of an annual publication. It was published sometime between 1948 and 1950 (I need help with pinning down the date of publication). 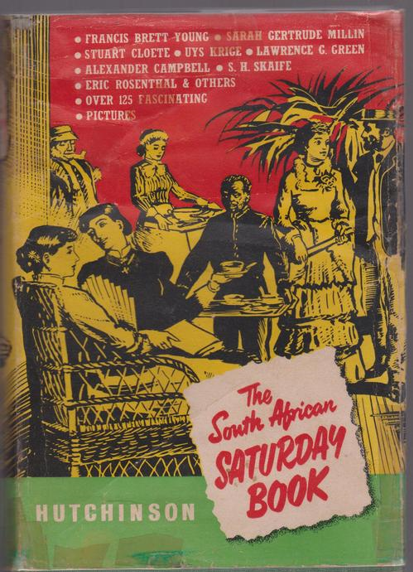 Nonetheless, I write about the Saturday book because these days it is a little-known publication but has some gems. It has acquired heritage value as a collection of curiosities, as Rosenthal describes his efforts. All the contributions are about Africa. It mixed short stories, photo essays, forgotten poems and reminiscences; the blend of fiction and non-fiction is slightly contrived. Editors and compilers try a little too hard. It is a book that captured the decade of the forties. Where else would you find within the covers of a single book, contributions by Sarah Gertrude Millin, Uys Krige, Lawrence Green, Stuart Cloete, Percy Fitzpatrick, Francis Brett Young and Nadine Gordimer amongst  others. 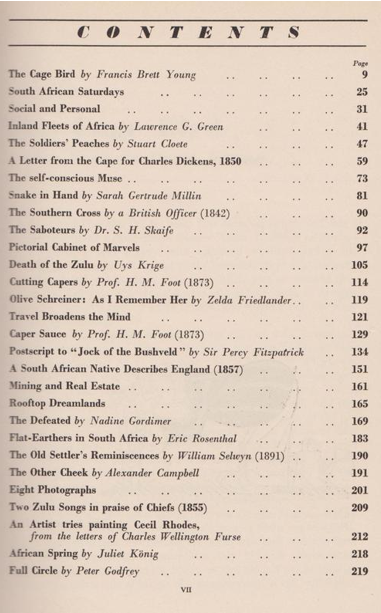 Rosenthal also reached back in time and included some historical bits of ephemera such as a letter written by an anonymous gentleman from the Cape to Charles Dickens (then editor of Household Words) in 1850, a poem by a British officer on the theme of the Southern Cross penned during the Voortrekkers’ siege of Durban in 1842, and a couple of humorous mocking  poems dated 1872 by a Henry Martyn Foot who clearly enjoyed a varied career in South Africa as a Baptist minister in Grahamstown and who later became a professor of English and Philosophy at SACS. These poems were first published in the Cape Monthly Magazine in February 1873.

There is a short two-page recollection of Olive Schreiner by Zelda Friedlander, who wrote a biography of Smuts in 1970 and also edited a 1949 tribute to Schreiner by some 30 writers, Until the Heart Changes - A Garland for Olive Schreiner. The interest of the Friedlander input was her recollection of Olive Schreiner and Emily Hobhouse visiting her family in De Aar. Once you dip into this book, and it is a bit like a Christmas cracker, it is full of surprises and one wants to find out more about each piece and most of the contributors. Who was Charles Wellington Furse for example, the man who found Rhodes too elusive and otherwise engaged to sit for a portrait? Were other artists a little luckier in pursuing their subject?

A definite peculiar curiosity (certainly to a reader in 2016) is the inclusion of a selection of the 57 drawings of some rather fanciful pigs done by members of the Reform committee when they were incarcerated in Pretoria prison in 1896 following the Jameson Raid. This collection was published as a privately printed volume edited by Charles Mullins, himself a member of the Reform Committee. Digging deeper, Charles Mullins was awarded the VC in the Boer War. 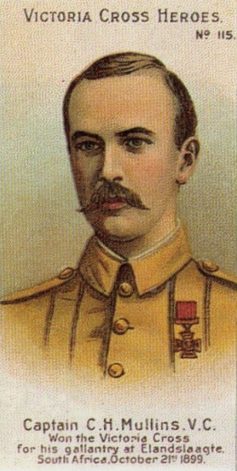 There are a couple of photographic items which alone make the South African Saturday Book a collectable volume. One is on Mining and Real Estate, highlighting the Wyld’s new Map of the Witwatersrand dated 1889. Another is a set of photographs of early mining activities in Johannesburg and the demarcation of the Randjeslaagte commemorative beacons. The item on the Pictorial cabinet of marvels introduces the watercolours of Heinrich Egersdorfer, a German artist traveller who portrayed every day scenes of Platteland life in the 1880s (Rosenthal went on to publish a book on Egersdorfer). A piece titled “The self-conscious muse” is about the reverse of the early South African photographers’ cards and pictures. H F Gros is mentioned. These clues to the work of early photographers are a researcher’s starting line. Another photo essay in the South African Saturday book is a whimsical glimpse of early sport and relaxation.

One of the best known and earliest of Nadine Gordimer’s short stories, The Defeated, appears in the South African Saturday Book. Gordimer drew on her experience of life in Springs and the mine concession store to create the characters of Miriam Saiyetovitz and her father John or Yanka. This short story has become a prescribed school classic and who would have thought then that the young Gordimer would become the recipient of the Nobel Prize in Literature in 1991. I wondered if this was the first place of publication of this gem that revealed Gordimer as an accomplished short story writer at a young age.

Once again, the problem with Rosenthal’s work is the lack of attribution or biographical information about the contributors, but each piece could set one on a chase to find out more about the author or the subject. But who would have thought that a light weight volume published nearly 70 years ago, should now be collectable.

2017 Guide Price: The Saturday book is firmly out of print, now rarer and harder to come by. One needs to watch the Bid or Buy website for a copy which can range in price from R100 to about R250.