Review of A Newspaper History of South Africa Newspapers are the grist to daily living, you have a subscription, buy one at the local cafe or fall for the sales patter of the newspaper man or woman on the street corner. I can't live without a newspaper. My expectation is that a good daily newspaper will report on daily happenings in politics, international affairs, business and sport. There may be some editorial analysis and a favourite columnist worth reading. I look for balance, accuracy, sobriety and interesting stories in a newspaper. There is no better way to start the day than with a cup of coffee and an early morning newspaper read. For brain stimulation I turn to the crosswords and sudoku. For fun there are the cartoons and comics.

But is newspaper history? Not exactly. A newspaper is current, immediate and topical. Newspapers reflect the ideology of the proprietor or the stance of the editor. Different newspapers appeal to different segments of the population. News is what the editors decide will sell the paper.

There is nothing as stale as yesterday's news and an old newspaper is best used as a wrap for hot fish and chips. Who knows what news from today's newspaper will still be readable and of interest in half a century. But there is an historical use for old newspapers... they become the stuff of history and over time become a rich archival source material for the historian looking back on the past and seeking the sensational, the quirky or the curious. Old newspapers provide a mine of information.

Of course keeping old newspapers can get out of hand. They are meant to be read and recycled. I find though that with all those interesting stories, it can be hard to throw out a good newspaper story. Maybe I shall need last week's news gem next week. Solution: start a newspaper cuttings file but that needs a filing system and an index and you have to keep the source and date your cutting if you are a true historian building an archive. Often I will save news clips but after six months of a growing dusty mound, they too have to be turfed. I once had a mad academic colleague whose sure sign of insanity was shown in his insistence of taking back to his home country his tin trunk of South African news clippings because he had lived through the momentous changes of turbulent times and here in his trunk was his newspaper history. University repatriation allowances did not cover a trunk of news cuttings!

Don Nelson has solved the problem for mad professors who want to hang onto the news in the various editions of A Newspaper History of South Africa. HIs newspaper histories go back to 1976 when the first edition came out and the stories of ordinary men and women who "made history" in a newspaper headline or report were so helpfully captured. That book has now become a collectable item of Africana because it is a period piece and is quite expensive on antiquarian book sites. My earliest copy is the 1990 3rd edition.

The 1990 3rd edition cover of A Newspaper History of. South Africa.jpg 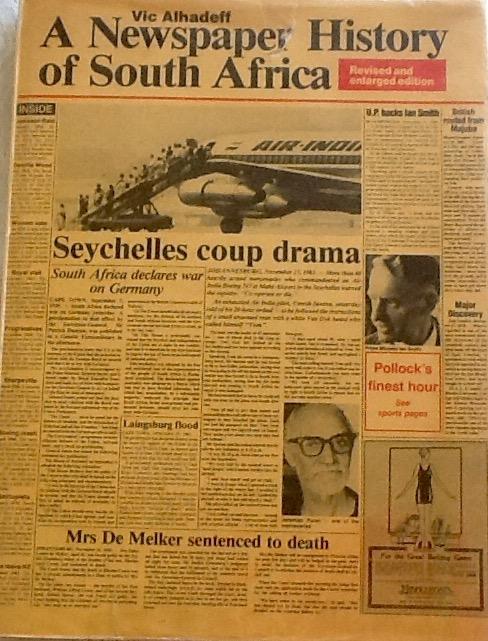 Don Nelson, the Cape Town based publisher has found a niche market with a new series by John Cameron Dow and the first edition was published in 2007. The series is now onto the 6th edition in 2018.    Astute author and publisher have given the reading public a popular tabloid sized book made up of newspaper headlines and stories, organized chronologically and with an excellent index plus bibliography to tell the South African story. In this 2018, 6th edition selected big news stories of their day are presented in a readable format as "A Newspaper History of South Africa."

Front cover of the 2007 edition of A Newspaper History of South Africa.jpg 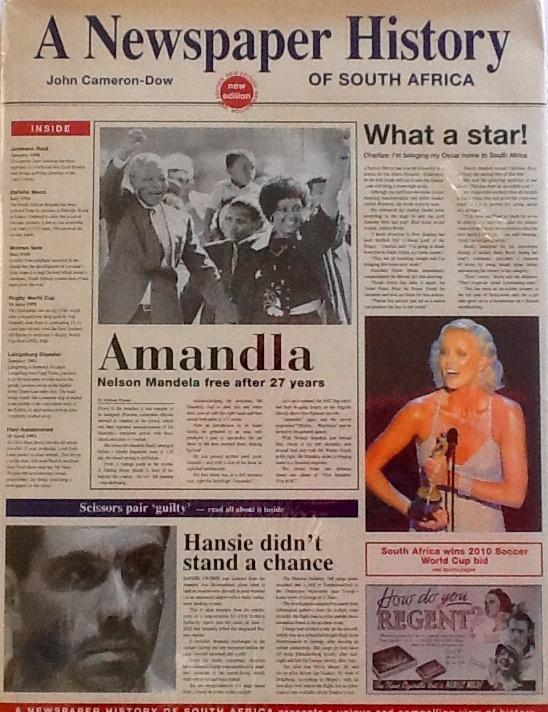 Front Cover of the 2007 Edition

Front cover of the 2018 Newspaper History of South Africa.JPG 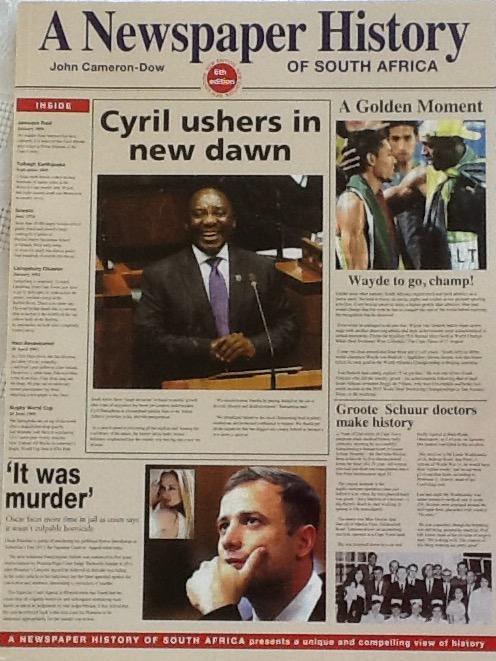 Front Cover of the 2018 Edition

John Cameron Dow mediates as an editor and reminds us that the reporters, the editors and the subeditors of newspapers are the ones who determine what is news. The format of the book looks academic but the book sells well because of its popular appeal. John has used his experience and feel for the news to select 50 big news stories which collectively guide the reader painlessly through the events, people and stories that shaped South African history. A variety of newspapers across the country has been used as source material. He quotes from the journalists who reported the story and adds his interlinking commentary to make up a cohesive story. The subtext is to see how newspaper design has changed from the days when papers were all small text and front page small text announcements of social engagements to huge colour in your face photographs and banner scream out headlines.

The starting point is 1886 and the mix is of political events, sensational murders and lots of sport. The South African story in the newest edition starts with the discovery of gold and romps through the  Jameson Raid as a prelude to the Boer War and then hops ahead 10 years to the Creation of Union. The Delville Wood engagement in France on the Somme in 1916 highlights South Africa's contribution to World War I. The 1922 Rand Strike was the big political story of the twenties. The 1937 Springbok tour to New Zealand epitomized the thirties at least for this editor. The drama of daily disaster and politics speeds up after the Second World War and once Smuts lost the 1948 election. We race ahead to the Coalbrook mine disaster of 1960, the shooting of a Durban July favourite horse, the Soweto Riots (that is the name here) of 1976, the Laingsberg Floods and the pace quickens.

The first big news story that I personally remember was the Coalbrook Mine Disaster and I recall the horror and sadness of that loss but I also remember asking how and why could such a disaster happen. Sharpeville, becoming a "stand on our own" republic, the Rivonia Trial and the assassination of Verwoerd were all events that I remember and funnily the moment when we listened to the news on radio (no TV or electronic social media then) and heard about the dramatic crisis. All of the stories are very South African and most of the selection bends towards the recent past in this book. This will make the book hugely popular and appealing to the current generation who wants to "relive" the sensational murders, the political stands of Bruce Fordyce, another New Zealand tour but this time with intense political overtones. Newspaper headlines express emotion and induce emotion but it's a different mood tomorrow.

The 1981 New Zealand Rugby tour faced a very different reception to that 1937 tour. I am reminded that I was totally disbelieving that South African politics could be changed through sport, but I was wrong and Peter Hain was right!

Newspapers always do look for sensation. Advertising underpinned the newspaper industry of the 20th century so readership mattered. Adverts could be read by the millions of readers who needed their daily newspaper fix. South Africa has had a bloody history of riots, revolutions, bomb blasts, air plane crashes, assassinations, murder, natural disasters. All are the the sign posts to democracy and ending eras. We like our heroes to be larger than life and there is nothing like a newspaper headline and now a colour photo to promote the cult of the personality in sport such as Hansie Cronje, Caster Semenya, Wayde van Niekerk, Oscar Pretorius or Joost van der Westhuizen. Perhaps we like them even more when our heroes commit a murder or cheat or face terminal illness. Politics revolves around Verwoerd, Nelson Mandela, Chris Hani, Jacob Zuma, Robert Mugabe (since there are now so many Zimbabweans forced to make their living on South Africa, his country is like an extension of the SA borders north and he's South Africa). Really. Our newspaper history is right up to date with someone called Ramaphosa the winner of the elections that has democratic South Africa voting for a political party and not for a member of parliament who is accountable to voters.

Ah well, in solace or hilarity you will find food for reflection when you dip into this history and realize what a peculiar nation we are, where sport excites and unites, and politics determines our destinies. What has been forgotten is the business news and the economy, the rand exchange rate, what happens to gold mining and the standard of living. Where's the news about food, entertinment, how people lived. I in fact love looking at old adverts the company advertorials to get into the wheat rather than the chaff of social history. Populism and newspapers can distort history but enjoy this romp through the headline stories of mainly the last thirty years.

Back cover of the 2018 Newspaper History of South Africa.jpg 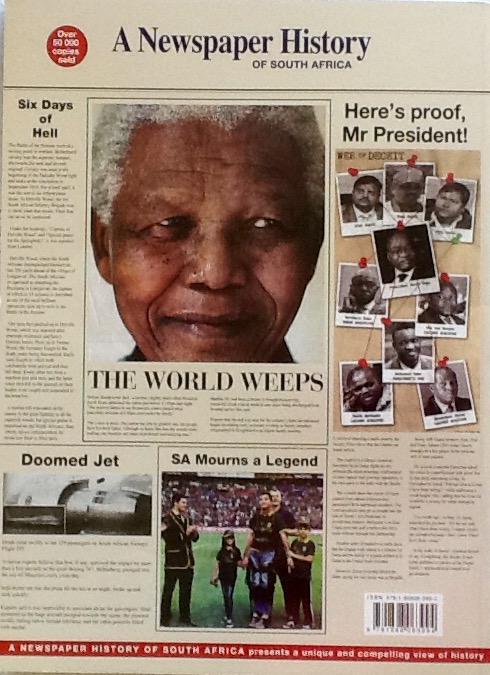 Back page of the latest edition

Old newspapers can be a route into history and the teaching of history at schools because newspapers use eye catching large fonts, the banner headlines and the sharp photograpg capturing the moment. Actually newspapers, because of their style, immediacy, racy writing, on the spot reporting should be part of the curriculum for the teaching of history. I can see a role for this history in the classroom and another role for an inspired teacher to dive in with a critical scalpel.

I would love Nelson and Cameron Dow to tackle the subject of newspaper history and the history of the press but that is a very different challenge.