Review of Johannesburg Architecture and Heritage 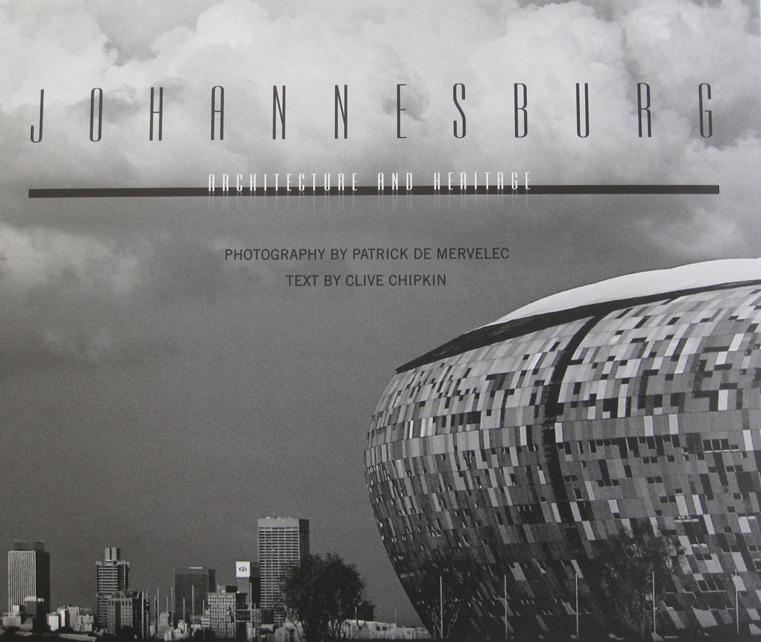 This is a book of photographs of old inner city Johannesburg, of its buildings, cityscapes, street views and public art. It is a very beautiful book and it slips easily and rather well into the library of books on the changing faces of Johannesburg. At least 20 companies or institutes have contributed funds for its publication. The photographer is Patrick de Mervelec, who teamed up with the architectural historian, Clive Chipkin who has written the all too brief captions for the photographs. The beautifully produced mix of colour and black and white photographs captures the mood, moment and feel of the city through the seasons. Unusual angles and close-up views of buildings, squares and bridges show details and distance with an easy familiarity of a photographic artist mesmerized by this raw city in transformation and transition. People do not feature. There is nothing here on the suburbs of the city; nothing on Soweto or Sandton. It is hard to discern a structured plan in the arrangement of the book and the photographs are all over the place, but let them speak for themselves.

Chipkin tries hard to impose a sense of narrative and period in explaining what the photographic eye has captured but it is not his book. One would like more information but for that rather turn to Clive Chpkin's own monumental books on Johannesburg architectural history. Johannesburg is a fascinating city if you are a brave resident or visitor with a curiosity that drives you to explore the complexities of this now very African city. It is a layered city of boom and bust, confidence and chaos as waves of migrants have sought their fortunes. It has always been a city pulsating with change, ready to rebuild, embracing the latest fads, hungry for the latest styles in architecture and hence it is a city with impressive examples of art nouveau and art deco, modernism, skyscrapers and postmodern. if you seek you will find international influences in its buildings - Amsterdam, London, Paris and New York echoes creep through the pavements. Aspirations, ambitions and new wealth were quickly given concrete form. There were certain physical limitations... gold mining under city blocks long meant a low level building line along a southern boundary; tailings dumps gave all a pall of yellow mine sand dust. The original small block grid lay out of the proclaimed mining camp town maximized the number of corner stands but also signaled an impermanence of a gold mining town. Later in the sixties, the Motorway enveloped and circled the city, cutting through the old mining landscape, while the mine dumps to the south and railway lines to the north created an artificial shortage of inner city land.

This meant that the high rise building, the skyscraper was an obvious and popular technical solution and in the period 1930s to 1970s the Johannesburg skyline was defined by new towers, concrete spikes and spirals... The Carlton Centre, Ponte, Penmore Towers, the Standard Bank Building. Yet old Johannesburg is also a city where the construction clock stopped in the late 1980s. Since the early 1990s older buildings went into decay, the old mine dumps were re-mined and then the old vacant land remained with promised development not materializing. Businesses moved to the suburban centers... north to Sandton and more recently Melrose Arch. Old wealth stopped shopping in Johannesburg. Long distance train travel was displaced by the airlines for the affluence. Provincial Government arrived and turned Johannesburg into its capital imposing a soulless bureaucracy. Office blocks were converted into apartments with a far more African feel. New heroes came to be remembered on street names. With high levels of unemployment, the poor of the city scrape livings through recycling and theft of any unprotected metal that can be stolen off the fabric of the city.

This book fails to deal with the complexities of a city in transition and divided between rich and poor. Instead it shows off a photographer's love of his art and displays Johannesburg at its best in revealing its heritage and the historical investment in many fine buildings through twelve decades.