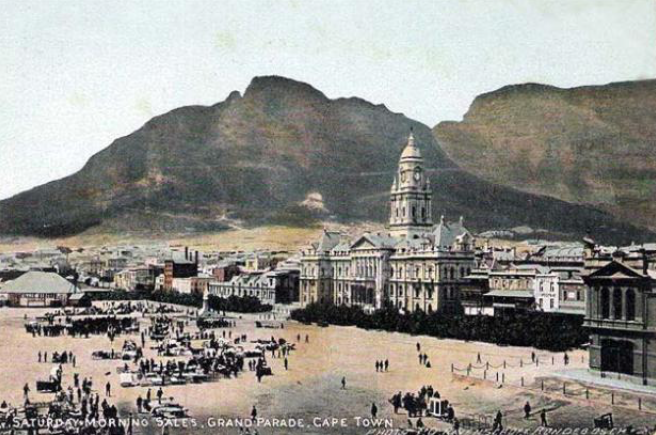 Michael Walker first published his Early Architects of Cape Town in 2012. The book has been a success and a new edition has recently been published. I reviewed the first edition in 2015 (click here to read).

A second edition signals success. It means that the first edition was popular and sold out. A second edition is an opportunity to add to a text, provide more information, deepen the coverage or correct any avoidable errors. Book collectors always think of a first edition as the desirable possession but sometimes the second edition, for all of these reasons, becomes the collectable one. Here is an instance where I am now the delighted owner of the second edition of Early Architects of Cape Town. 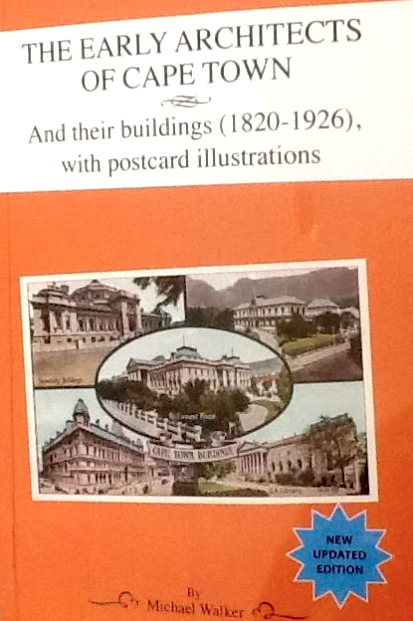 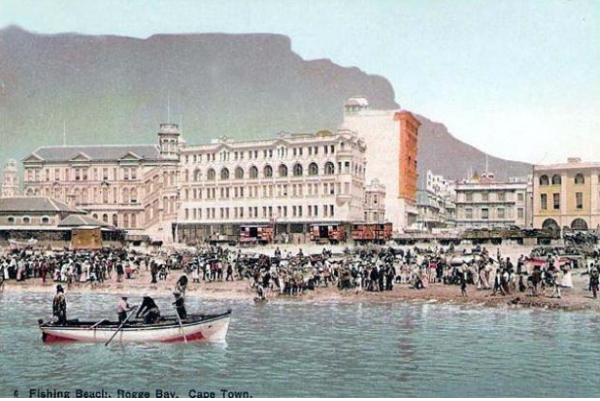 A vintage postcard of landing fish at Rogge Baai, Cape Town. It’s the background that holds my attention. Postcard sourced from oldstratforduponavon.com

Michael is the man behind the Kalk Bay Historical Society and this is effectively a book organized and produced as a private publication. Clearly the book has achieved some status and is now regarded as a source to be quoted. He has also produced a second volume on the Early Architects of Johannesburg. He became interested in Cape Town buildings (and by extension their architects) through his avid collecting of Cape Town postcards. Buildings were an obvious subject in early postcards and were popular with the early photographers of the city. A postcard makes a neat souvenir either to be dispatched with a “wish you were here“ message or saved as a memento of a place visited. According to Wikipedia, 'Deltiology' is the study and collection of postcards. A Deltiologist is a person who collects and studies such postcards (the term was coined in 1945). Deltiology is closely allied to philately as a post card can also carry a postmark and a stamp.

Old Postcard used on the front cover of Early Architects of the Cape.png 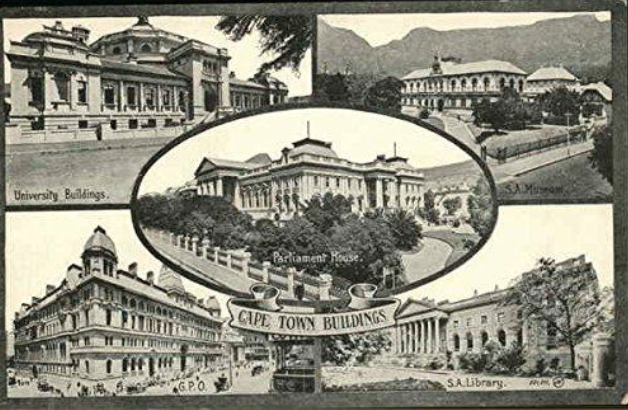 Collecting postcards can be an enormously expensive hobby. For example, the cover postcard used by Walker (and it is a chromolithograph) is currently available on Amazon as a black and white postcard at the price of $24.99. It offers Greetings from Cape Town, was an unused card, has no date and was manufactured by Valentine and Sons but identified as British manufactured. 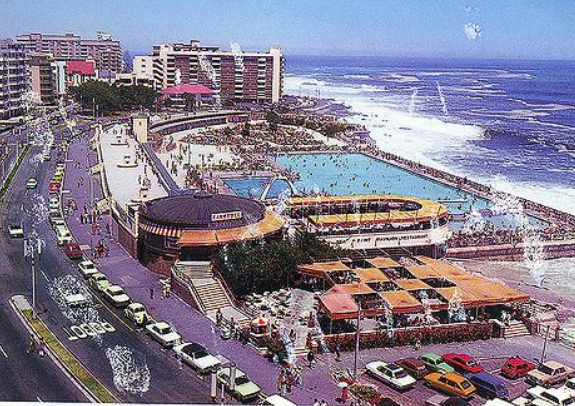 Here is a 1970s postcard of the Sea Point Pavilion. There is an earlier history to the Sea Point Bathing Pavilion recounted by Michael Walker dating back to the 1912 Sea Point Municipality beach improvement scheme. Frederick Cherry (the architect) and Nisbet Roberts (a hydraulic engineer) created the pavilion and pool. The 1977 pavilion was a very different  place. Hence a series of postcards can help track change through time in one popular location.

By 2012 the Weekend Argus reported on a rather different then and now view of the Seapoint Pavilion.

There is a new vocabulary and a set of abbreviations to be absorbed in the study of postcards - such as ‘divided backs’ or an ‘undivided back', ‘unused’, ‘postally used’. In addition  Michael Walker has drawn on the postcard collections of other Cape Town collectors such as Mike Deeks, Malcolm Murphy and Hugh Amoore. Getting out the valuable information that postcards open up has been a team effort and I am grateful to all the collectors for sharing their collections. Another admirable collection or at least selections from it was the volume, A Johannesburg Album (published in 1986), drawn from the collection of postcards of Dr Oscar Norwich. Norwich produced a large album showing streetscapes and early landscapes of Johannesburg as well as buildings but he did not zoom in on architects. 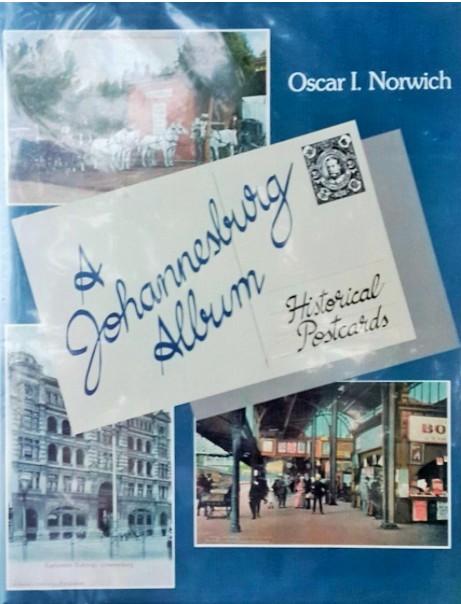 These days postcards have sadly fallen out of favour as emails, instagram posts and whatsapps are the electronic alternative. When was the last time you purchased a postcard?   But we can thank the collectors of postcards such as Michael Walker for their passion. I have found that a google search for “old postcards” or “vintage postcards” brings up dozens of superb images. My interest is in saving the images of early Johannesburg, hence my own collection is entirely electronic. Michael seeks to provide a brief sketch of each significant architect of Cape Town of the 19th Century and early 20th Century, illustrating the entry with picture postcard illustrations of a building and also enhancing the entry with a small  vintage photograph of the architect.

Michael’s new book follows the same format as the first edition, from pages 1 to page 130, hence I refer readers of the Heritage Portal to the earlier review. The new excellent addition to the second edition is in two new chapters: one on the architects of the Country Districts of the Cape Colony between 1849 and 1913 and a final chapter on Other South African cities where Cape Town architects made a significant contribution; men such as Charles Freeman, Hawke and McKinlay, George Ransome, Henry Greaves and Walter Reid (who are represented in Johannesburg’s early architecture) or Henry Greaves (Port Elizabeth) or William Delbridge (Maputo, old Lorenco Marques). John Perry should also have been included in this group of architects with a national reach as Perry won the competition for the design of the Johannesburg Public Library and was the architect of several early Wits University buildings. Arthur Henry Read was identified by Anna Smith in her Johannesburg Firsts (1976) as the first architect of Johannesburg. But there is a more interesting story of the three Reid brothers, Arthur, Harry and Walter, who practiced architecture in South Africa. 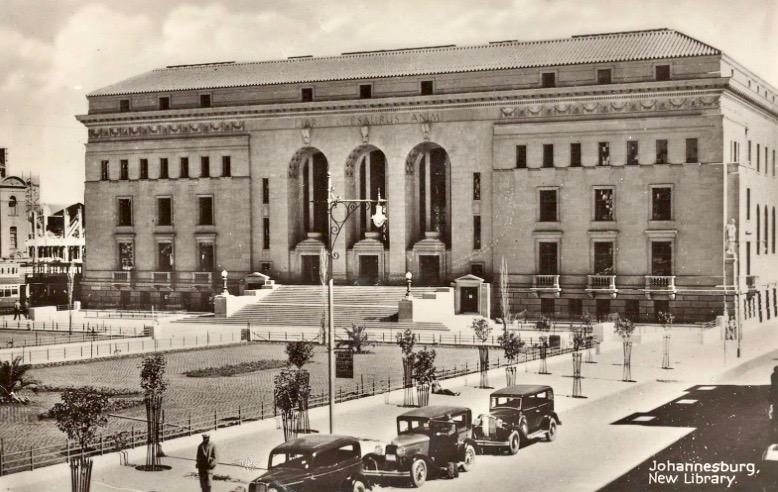 I am delighted that Sophie (should this not be spelt Sophy?) Gray has now been included in this new book and that four of her churches are represented in picture postcards. I recently acquired Desmond Martin’s book on the Bishop’s Churches which documents a selection of Gray’s churches. Or one can dip into Thelma Gutsche’s biography of Gray:  The Bishop’s Lady. Philippe Menache & Darryl Earl David’s three books on South African country churches also gives a good coverage of church architecture which broadens our knowledge of Sophie Gray. She has an important lecture series at the University of the Free State named in her honour but this architect of beautiful 19th century South African Anglican churches needs an architectural monograph. She was a woman of substance. 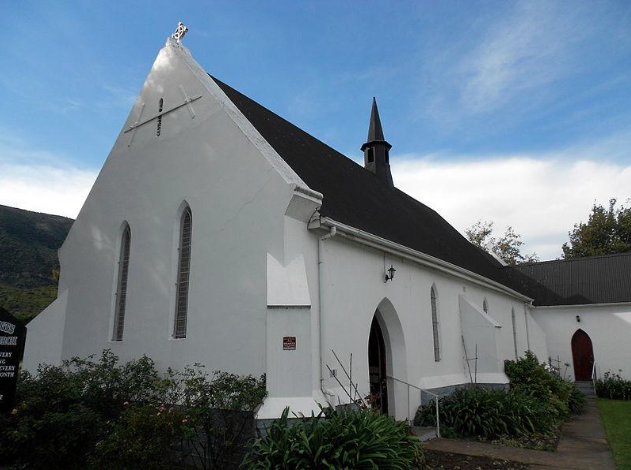 What about a fuller discussion of the Herbert Baker practice and how Baker’s South African contribution and impact really matured in Johannesburg. There is an opportunity to probe how, why and when did architects achieve national reputations working perhaps in several cities or extending their practices? How was the architecture profession shaped by the earliest efforts to educate and induct young people into designing buildings that reflected trends, styles and fashions abroad but also the evolution of distinctive South African architectural styles and influences? But perhaps these are unfair questions for a deltiologist who fell into a study of historical architecture through collecting postcards and I can only add my appreciative and grateful thanks that Michael has made the connection between postcards, architects and architecture. I was also grateful to Michael for putting me on the track of George Ransome’s Cape Town work when I went in search of the origins of Johannesburg’s iconic Markham’s building on the corner Pritchard and Eloff Streets. 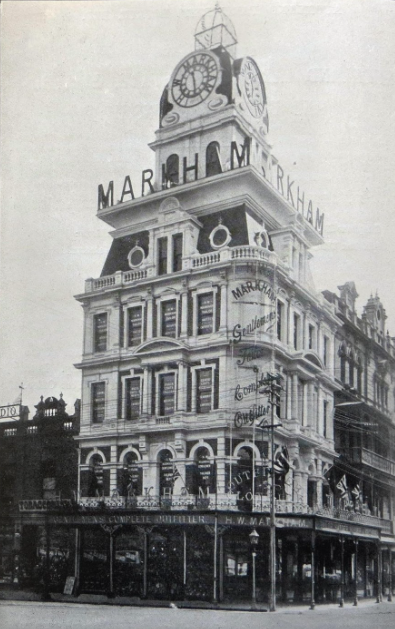 Many of the buildings photographed for the postcards of another century have long since been demolished. The postcard becomes a documentary source, incredibly valuable in its own right as a record of what was there before. Michael includes a useful list of demolished buildings in Cape Town and what has taken their place. He also pays tribute to the builders with a list of those who worked for and with the architects. There is a useful bibliography, an index to the buildings and, most helpful for postcard enthusiasts in Cape Town and elsewhere, a comprehensive list of  postcard publishers.

In summary, this second edition of The Early Architects of Cape Town replaces my first edition and fits into my own specialist collection of books on architecture, Cape Town and vintage photographs and finally extends my knowledge of who the early postcard producers were.

Main image: Vintage postcard of the Saturday morning scene on the Grand Parade with the City Hall in the background. Table Mountain creates a dramatic backdrop. Reid and Green (i.e. Harry Austin Reid and Frederick Green) were the architects of the City Hall. Their design was chosen in an open competition and the foundation stone was laid in August 1900. Postcard sourced from oldstratforduponavon.com