The Golden Crown versus 100 Years of Mining 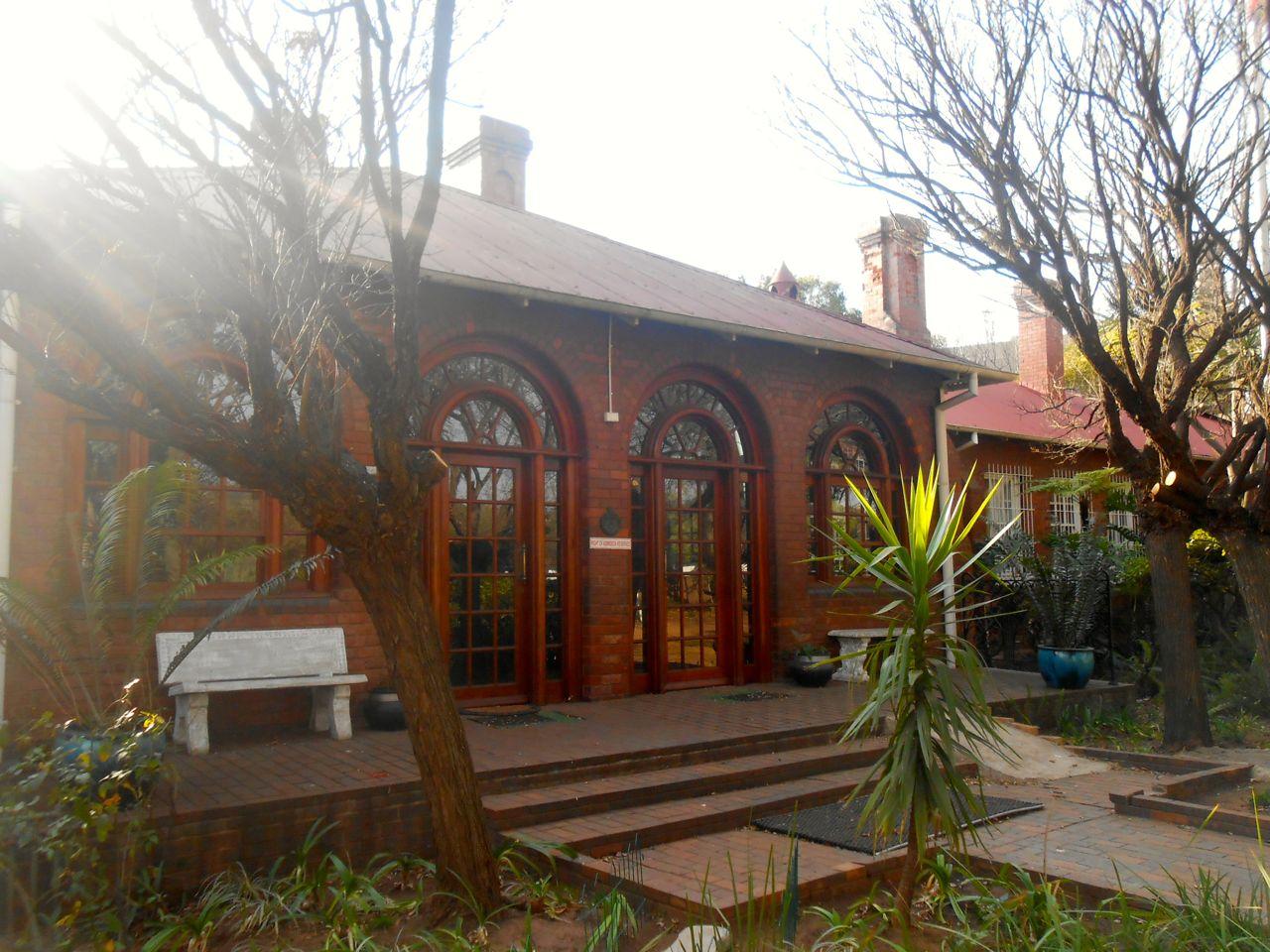 The Golden Crown of Johannesburg by Gerhard Freiherr von Ketelhodt, edited by Willie van den Berg, published by Willsan Mining Publishers, 2007, paperback, 150 pages, illustrated. This is an authentic quirky small book of memoirs of an immigrant miner from Germany who worked underground as a miner at the best known of the Witwatersrand mines, Crown Mines, for some twenty years from the mid 1950s to the 1970s. He sets his own story against the backdrop of the early mining origins of Johannesburg. The most fascinating parts of the book relate to Von Ketellhodt's (a German immigrant of Noble birth and a qualified Ruhr coal miner) highlights and experiences working as a miner for the Rand Mines group. The author highlights his adventures as a fire fighter and shift boss or mine overseer. Life as a professional miner was dangerous and required considerable personal courage even in the latter decades of the 20th century. The book offers an odd mix of reminiscences and a compilation of interesting snippets of information about mine capitalists, pioneers, African mine dances, statistics on mining and facts about mine systems and technical methods. This mixture is the essence of the book's charm and authenticity, although the author takes as a given the socioeconomic and political framework of the high apartheid decades.

Crown Mines founded in 1909, was in its day a fabulously rich mine: it produced 80 tons of gold, but by the 1950s its reserves had been depleted so Von Ketelhodt relates how he searched for the original mining plans of the 1890s (located in the Johannesburg Public Library) to extend exploration and keep Crown Mines going. Crown Mines, the jewel in the Witwatersrand mining crown finally closed in 1976. The most interesting chapter of the book is the one on the efforts made to extend the life of the mine by re-opening old shafts, remining old stopes, reclaiming old areas and reverting to primitive mining in outcrops. 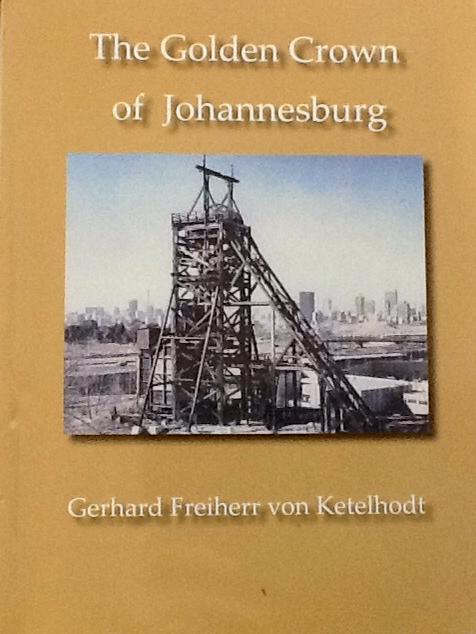 The recent history of Crown Mines has shifted to myth making. Crown Mines is still worth a visit but the history of gold mining is a single hard to find option in the frenzied offerings of casino gaming, entertainment, hotels, restaurants and thrilling amusement park rides. It is still possible to descend 226 metres to Level 5 of Shaft 14 and come closer to the life of Gerhard Von Ketelhodt and this is the book you should read before you go in search of the 'Jozi's Story of Gold' at the Crown mines of today.

The book is well illustrated with an unusual selection of photographs, but the size of the illustrations, design and lay out of the pages could have been more professional. 14 pages of adverts or advertorials detract from the look of the book though the sponsorship must have been welcomed to get the book published. A map of the site of the old incline shafts, a couple of other maps, together with a glossary of mining terms, an index and a selected bibliography add to the usefulness of the book. Unfortunately some poor proof reading allowed typographical, labeling and grammatical errors to creep into the text. It is a fascinating personal story but a history of Crown Mines still needs to be written.

2015 Price Guide: This little book has become harder to find: some copies may still be around in local bookshops but it has become classic in the genre of Witwatersrand mining history and the price has shot up from the original R150 to over $100.

Munro Stars: *** A memoir and an authentic voice of a practical miner but an incomplete history of Crown Mines.

So Rich an Inheritance by James Ambrose Brown. The subtitle is 100 years of Mining Johannesburg Centenary, 1986, published by Protoypal Publications, Parktown, Johannesburg. 152 pages, illustrated. This was a self consciously historical publication to celebrate 100 years of mining on the Witwatersrand. The A4 size pages are sepia toned and the ornate edged frames for each page aim to make this look like an instant antique book. However, because it was a commercial publication, it also carries 70 pages of advertisements of mining firms and products and the book has the feel of a period magazine. The adverts become interesting as they show who were the mover and shakers in mining and heavy engineering firms when the industry was at its peak and benefitting from the the 1980s rise in the international price of gold. The book was written by a journalist. The breadth of coverage of mining in general in South Africa sacrificed depth in this history. The book is divided into four sections, with opaque headings, (the seekers and the search, the nation builders, miners and methods and towards the future). There is no chronological structure, nor is there a single footnote, bibliography, index or authoritative source references. This is a book that offers a superficial gallop through the history of mining. There are no decent illustrations. 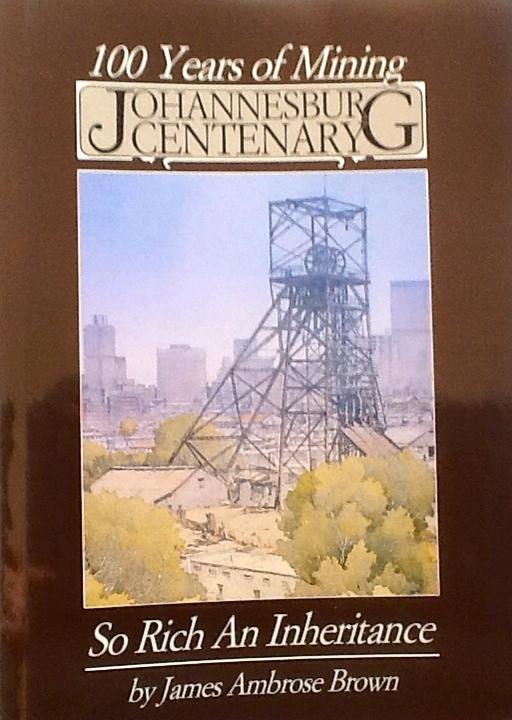 It was meant to be a centenary collectors item but ended as a remaindered book readily discarded and it has taken some 30 years for the book to join the possibly desirable and for the advertisements to capture the zeitgeist of the eighties. Surprisingly, the text written by a capable journalist is quite readable and the pity is that the book falls far short of being good history because of its shortcomings in research and source references as well as a lack of maps and documentation. Six blank pages are another sign of poor layout.

Munro Stars: *** Desirable simply because it is about mining history

Both books have interesting cover pictures of old familiar, but now fast disappearing Johannesburg mine headgears with views of the city in the background. The one is of Village Main and the other of Crown Mines. The cover illustrations alone make both books desirable. The Ambrose Brown book is the better written text, but the Ketelhodt book is the more unusual because it is based on personal mining experience and is so quirky. The recent renewed interest in saving surviving mine headgears makes mining books an important dimension of that effort.

***** A superb book , top reference source , recommended to the highest degree and has influenced me in some significant way.