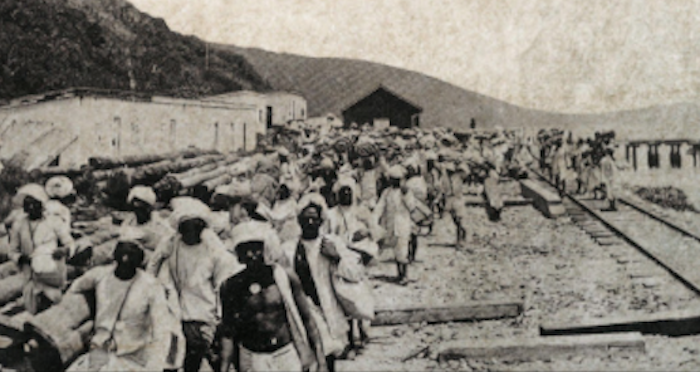 Have you ever wondered about the distinction between an immigrant and a citizen? Many of us are immigrants to South Africa or if it was your parents or grandparents who came to South Africa from abroad, you could describe yourself as a first, second or even third generation South African. Depending on when and how your family came to South Africa, and the colour of your skin, it could have been a fairly painless process to transition from immigrant to citizenship status.

I arrived in South Africa as a two year old and I have actually found the shipping records which give the factual information of our journey on the Carnavon Castle in 1947. For me it was a fact of identity that I was a South African through birth, though abroad, to a South African mother who was a war bride in England and who then returned to South Africa with her husband, my father, with very little trouble or hassle after the Second World War. We were a family proud of our varied roots - predominantly English but also Dutch missionary, Irish, a little bit of French refugee stock and somehow it came together in a South African identity defined by schooling, accent, friends and  local knowledge. By the time one arrived at the teenage years identity was embedded. My mother, saw her identity as that of a 'British subject' with a right to residence across the British Empire. I wondered about that as it seemed to me to be quite unlikely that being part of the British Empire added up to citizenship rights wherever the map was painted red. This is the book that could have been a useful guide to my family many decades ago. 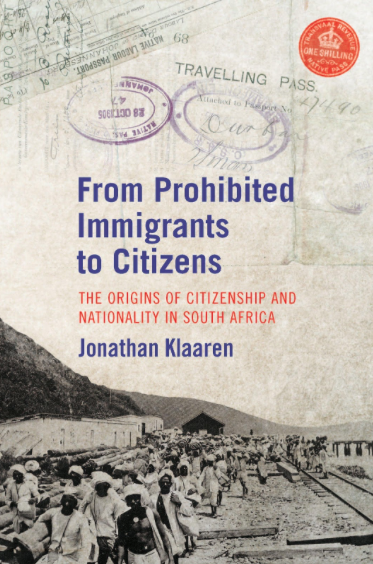 Moving from immigrant status to being a citizen with voting rights is the subject of this book. It is a dense law book on the important subject of citizenship and constitutional rights, but the focus is primarily on who was a prohibited immigrant and how that space was negotiated. It is an academic work. From the first page it reveals dense scholarship but it is written in a readable and interesting way. It aims to answer questions about the South African national order and the origins of the rights of people. Jonathan Klaaren has tackled the making of South African citizenship from a legal perspective. It is a fascinating subject because the South African identity and the right to call oneself a South African citizen was fiercely fought over, reinterpreted, twisted  and distorted through successive decades depending on the political regime in power.

The author successfully negotiates the questions of borders and the demarcation of borders prior to 1910 when different laws applied in the Cape, Natal, Orange Free State and the Transvaal. The study fits into the field of Mobility Studies. For heritage work it is book that will become a useful reference for genealogical research and connecting the different forces and laws at play in the different parts of South Africa as economic opportunities encouraged migration while the law determined who could claim rights to settle where. For example, was your family subject to the impact of the Quota Act of 1930 or the 1937 Aliens Act, which affected Jewish immigration to South Africa when Jews where trying to escape from the tightening noose of Hitler’s Germany.

Of particularly interest are the experiences of Indian, Chinese and African migrants. How were these economically desired but politically problematic migrants constrained and restrained by the law and by the courts. The interconnectivity of Asian and African migration is explored. A major theme is that of the Indian migration regulations in different parts of South Africa and the epic Gandhi struggle against licensing and restrictions. This study adds to the literature of the history of Indians in South Africa. The challenge faced by the State in addressing  the regulation of immigration from India ultimately came to make law of significance to the new Union of South Africa.

The significant concepts explored in this book are those of immigration, alien status, nationality, naturalisation and subjecthood, quotas, passports, border controls, administrative management and citizenship. South African citizenship laws as codified in the 1930s emphasized the unequal and racial forms of citizenship that applied.  1937 became the important date for legal consolidations and demarcations. Clearly there were many contradictory pressures and strains that pitted the desire for national autonomy and the principle of Union nationality against legally permitted unequal claims to the rights and duties of citizenship.

We have come a long way since 1937. Klaaren’s final chapter covers the ongoing citizenship debate in the post-apartheid constitutional democracy; how has citizenship policy evolved in the last two decades and how does South Africa’s citizenship debate fit into a global context. Citizenship rights become tied to rights to access to social security and what protection could be extended by the South African state to its citizens facing human rights abuses in other countries. Policy discussion today has at its core the issues of asylum status and refugee status; here the disturbing aspect is that a refugee or asylum seeker should entertain no expectations of becoming a citizen. So we are back at the old issues of desirable and undesirable immigrants.

The question that surely is the proverbial elephant in the room through the entire period under discussion is the economic context of the making of policy and laws. I don’t think one can understand the shaping and impact of immigration laws unless one also explores the economic context. Immigrants as workers have the potential to be a productive resource and a factor of production. Klaaren does not tackle the subject as either an economist or a statistician. For laws to make any sense one has to look at the capacity of a society to absorb the other and find useful employment for immigrants and would be immigrants. The missing information is the population statistics and the employment and unemployment figures. When the mining industry  wanted labourers the immigrant laws were fashioned to allow such recruitment and employment; similarly so the sugar industry of Natal. How then could an economic migrant transition from a temporary worker to a permanent citizen with full rights and duties? Historically immigrants have been productive players in the economy, but today with an official unemployment rate of 26.6% there is intense anxiety about the absorptive capacity of the country for migrants, particularly if you are a township youth from an informal settlement with limited education and little prospect of a job. The dream of a pan-Africanism and as Klaaren calls it “Afropolitan denizenship” remains a long way off in a world where xenophobia lurks and erupts when competition for resources becomes ugly and is played out in attack on foreigners, with a tragic loss of life.

Nonetheless, this is a commendable, deep study of a difficult and complex subject. The biggest achievement of this book is that it brings order and a route to an easy understanding of legal intricacies and laws designed to plug holes as different types of migrants and immigrants penetrated fortress South Africa. It is a thought provoking book and for this reason should be read by a broader audience than simply academic scholars. As is to be expected from a thorough academic study there is a comprehensive bibliography and an index. The book delivers on the objective of making a contribution to Mobility Studies but it is also about what it means to build a state and forge a national identity around citizenship in a democratic dispensation.

Next time you have the pleasure of visiting the Department of Home Affairs to apply for a new passport or acquire an identity card, take this book along for a read while you patiently wait for your number to be called. You may find that you are told “so sorry you can't have an ID card yet, your ID number tells us that you were not born in South Africa, but yes you may apply for a passport“. Now try waving your copy of Klaaren at the administrators with those giant photographs of the President and Ministers smiling down on you, and my bet is that you will be met with blank incomprehension. Console yourself with Professor Klaaren and his explanation as to how we have progressed from prohibited immigrants to citizens.