The Early Architects of Johannesburg and their buildings (1886-1899) 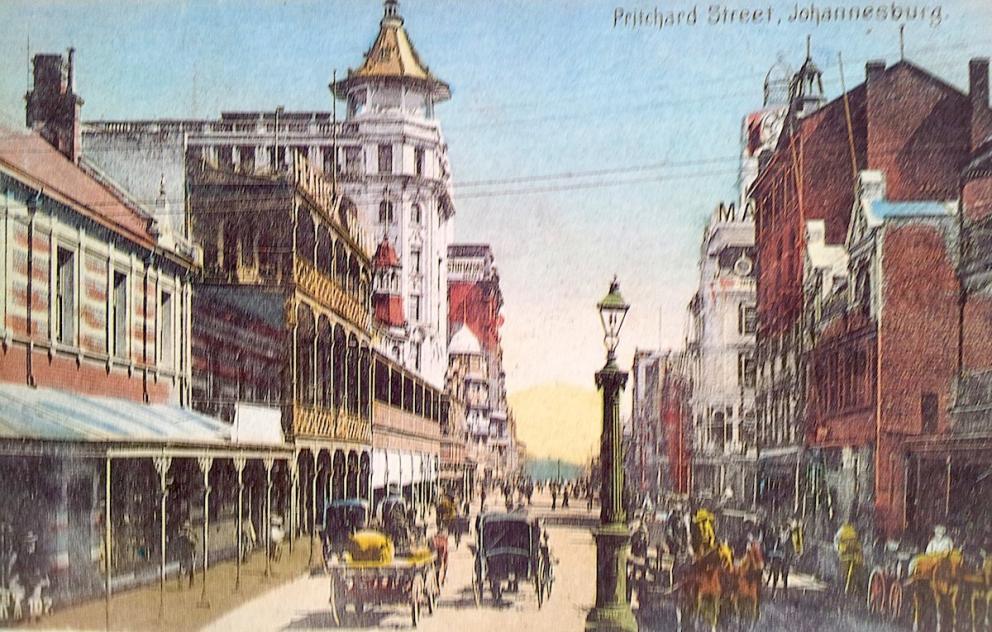 The Pioneer Architects of Johannesburg and their buildings (1886 to 1899), with postcard illustrations is likely to be of interest to the Johannesburg heritage fraternity and will be a useful addition to the literature available on Johannesburg architectural history. The work of twenty architects and their buildings over the period 1886 to 1897 has been researched. The author’s objective has been to find out more about the stories behind the buildings shown in those quaint, hand coloured early souvenir postcards and to relate some personal stories about this early professional group, their practices and their families. The entries are chronologically arranged and the approach is descriptive and narrative. Eighteen of the twenty selected architects’ entries shows a small oval portrait sepia photo of the architect together with a selection of early postcards illustrating some of the significant buildings of the specific architect. 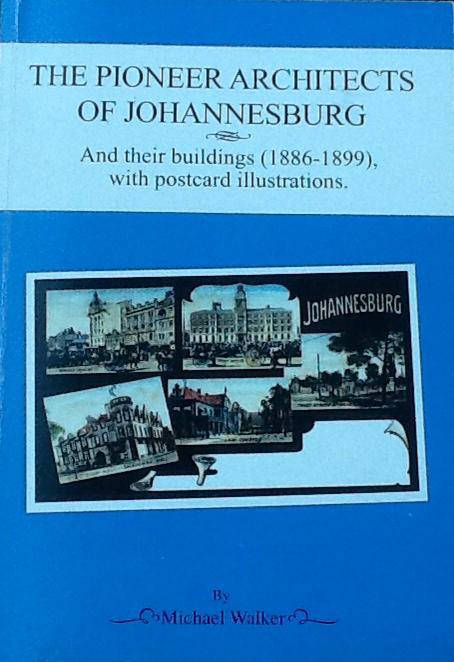 The list of architects covered is an impressive one, arranged in chronological order by date of arrival in Johannesburg or Pretoria and covering a fair selection of pioneer architects from A H & W Reid, Charles Aburrow, Philip Treeby, Herman Kallenbach, Robert Howden, Frank Emley, Sytze Wierda, William Stucke, and John Moffat among others. Unlike the Cape Town volume there are no more than passing mentions of partnerships in Johannesburg architecture. The rapid shift from  mining camp to city of gold with an impressive array of public buildings within a decade was due in no small measure to the architects and their practices who trekked from Cape Town to the Rand or who extended their range from Pretoria or immigrated from abroad. Johannesburg’s readiness to build, outgrow, demolish and build afresh on an ever larger scale was evident from the earliest days of the city.

The buildings served both the public and the private sectors. There is huge diversity showing entrepreneurial drive, confident clients, emerging capitalism, civic pride and speedy town planning among the early city fathers and mining magnates. The town’s architecture that was experimental, sometimes innovative but often adapted and derived from late Victorian and Edwardian city architecture of other centres. There are useful parallels and contrasts with emerging Australian cities, but this theme has been missed. A building industry rose to the challenge and architects and contractors were resourceful in finding or importing huge quantities of building materials or speedily developing the capacity to make bricks. The varied types of buildings show sophistication and a widening economic base: the Johannesburg Hospital, the  succession of Rand Clubs, the series of Stock Exchanges, Market buildings, hotels, apartment blocks, the Rissk St Post office,  law courts, a telephone tower, police stations, grand residences, banks, schools, theatres,  commercial offices and shops, mining group headquarters, churches and even public libraries. Within 20 years of Johannesburg’s founding date and despite the negative impact of the Anglo-Boer war the Transvaal University College (1906) was designed by Robert Howden and Arthur Stewart in Italianate Renaissance style. Eloff St had come of age. 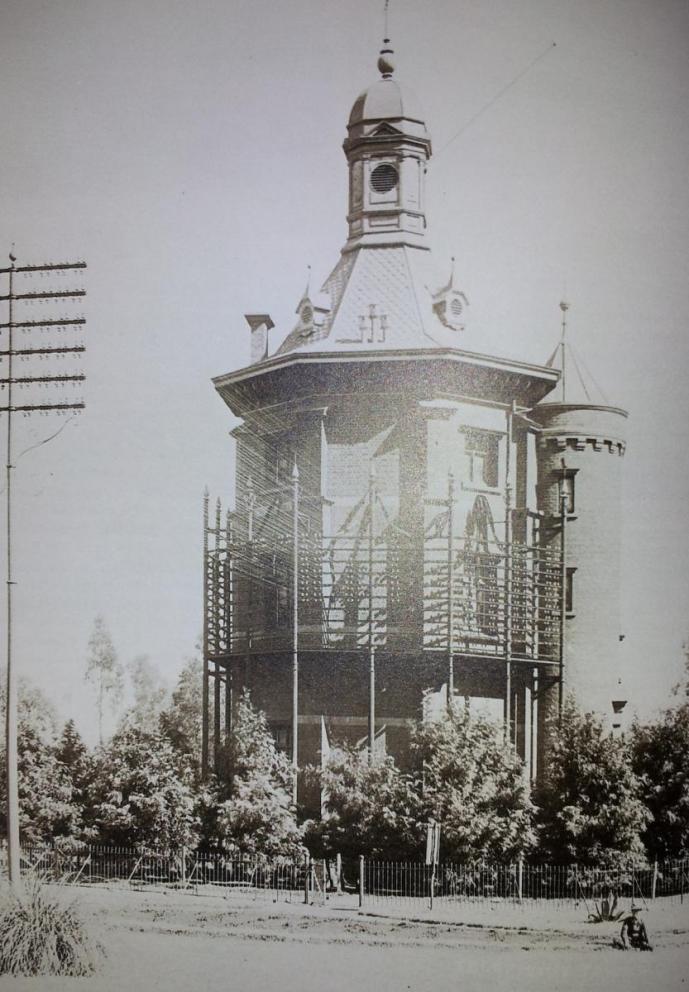 Old photo of the Telephone Tower (From Mining Camp to Metropolis)

Vintage postcards have a certain nostalgic appeal. If well organized and a good collection built up around themes (as in this case) they are a form of ephemera that are highly collectable. They often give a clear view of a particular place at a moment in time but they were often undated. The postcard was meant to be a quick form of communication by post and reverse messages may provide a date and give some social commentary. Postcards were printed in large numbers and often sold commercially as souvenir reminders of a place, from an era when the camera was a rare personal possession. It is interesting that postcards of Johannesburg were published  in Johannesburg but also in Cape Town, Port Elizabeth and Durban. The photographs were either left as black and white or were hand coloured. Sometimes the quality of the photo was poor.   However, this is such an unusual collection that the author could profitably have shared his expertise of collecting postcards and how to build a collection.

Another postcard collector of note was Oscar Norwich whose  A Johannesburg Album Historical Postcards (published by AD. Donker, 1986) was a centenary celebration and certainly came to mind in dipping into the Walker selection. The Norwich book was a large volume in  album style and arranged according to geographical areas of the city, older suburbs and early mining photos. The focus was on the evolving town and city streets with the information about the men who designed and built the early buildings of Johannesburg  somewhat buried in the text and footnotes. Walker’s book adopts a more architectural approach in directing our attention to a section of important architects and their early achievements.

However there are weaknesses in the research of Walker’s book, as I was surprised to find that the magisterial work of Clive Chipkin, Johannesburg Style appears to have been overlooked. The reference to Dieter Holm (in the bibliography) is to a chapter in the seminal work Architecture of the Transvaal (edited by Roger Fisher, and Schalk le Roux with Estelle Mare, 1998, University of Pretoria). There is also no reference at all to the various pamphlets and heritage  work of the Parktown and Westcliff Heritage Trust and their important series of pamphlets on early Parktown and Johannesburg architects. The important From Mining Camp to Metropolis – The Buildings of Johannesburg 1886 – 1940 by Gerhard-Mark van der Waal (1987) has been missed.Early Johannesburg its buildings and its people (1985) was the vehicle for the drawings of the architect Hannes Meiring, it earns a mention but it is an incomplete reference. Perhaps it is unfair to criticise an author for what has not been covered, or for a bibliography being too “selected”, but one worries about which important other titles were not consulted.

We have been enriched by the publication of this attractive, visually appealing small paperback (74 pages) but it could have moved into the far more serious terrain of scholarly architectural history had the author undertaken more comprehensive research. The inclusion of plans and drawings together with the more careful footnoting of original and secondary sources would also have enhanced the value of what is an innovative and interesting approach.