This is a book that lays bare the pity of war by telling the personal stories of fated individuals. The events, images, futility and enduring hell that was the First World War still has the emotional power to move and to make one ponder why the madness happened. It was called the First World War or the Great War because of the geographical spread of the conflict and it was a "great" war in its impact. South Africa's involvement happened because the newly unified provinces were part of the British Empire and following the Union Defence Force's campaign in German South West Africa, white men were given the opportunity to voluntarily enlist to fight. Many were killed as members of the South African overseas expeditionary force. Black men also volunteered but became members of the South African Native Labour Corp. Many died with the loss of the Mendi in 1917 or from 'natural causes' when abroad. To give a few statistics, 146 000 men served in South African units, of which 67 000 served in France. South African casualties totaled 18 600, with 6 600 losing their lives.

For the Glory of South Africa and Empire - Book Cover.jpg 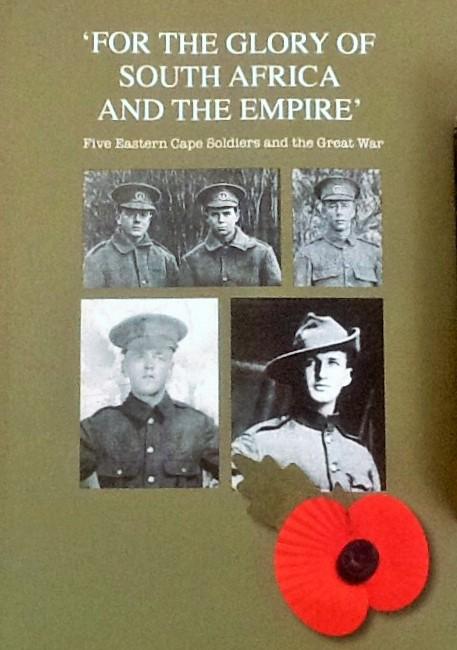 The author has written a local history that links the Eastern Cape to the  Western Front of France as it honours the memory of five soldiers who came from the Bathurst Division in the district of Port Alfred and who died on foreign soil in defense of the British Empire. Their names along with those of fifteen other young South African men  are engraved on a war memorial in Lower Albany. The author calls "her" selected five, the Memorial Soldiers. All were casualties of the Battle of the Somme and died in 1916. The words on the Port Alfred War Memorial are inscribed with the poignant epitaph, "in remembrance of those who paid the supreme sacrifice in the service of their country".

This book, published in 2015, is the second of a series of small books by Kathleen Satchwell to commemorate the centenary of the First World War. It is dedicated to the memory of these young men sacrificed in war, who were the sons of the Eastern Cape. A few months ago I reviewed the first book by Satchwell Your Loving Son, Yum, the letters of Grahame Alexander Munro to his family 1915 -1916 (click here to view) which  was the presentation of the letters of a young man who fought and died in East Africa before he reached the age of 20. In contrast this book is more ambitious as the text is written by Kathleen Satchwell and letters are extracted as quotes. It is also a more substantial and a more confident study as it encompasses the lives and experiences five young men who died between the ages of 18 and 28. The book also places these five lives into the context of their local community in South Africa and follows their journeys to Egypt, then France and finally to a war memorial.

The five were Hubert Openshaw, Les Mandy, Bernie Olyott and two brothers, Vic and Joe Pattison. By strange coincidence, when I visited the Delville Wood CWGC Cemetery last year I stopped to read and photograph the tombstone of Leslie Mandy, but knew nothing of his background. Now I feel I know this man.

Kathleen Satchwell has produced a small classic, that joins the other works of literature on the First World War. It is the almost pointillist approach, the attention to the minute personal details that makes this work a must read for any South African wishing to go on a pilgrimage to the battlefields and cemeteries of France. There were of course the classic autobiographies of men, published in their lifetimes, who fought and survived and wrote their memories such as Robert Graves, Siegfried Sassoon, Edmund Blunden, Frank Richards and Remarque's "All Quiet on the Western Front" is well known. The poets of the First World War, Wilfred Owen, Rupert Brooke, John McCrae, Edward Thomas, Isaac Rosenberg gave us a genre of literature that again and again rings with the tragedy and loss in the trenches of the Western Front.

However, what is remarkable about this particular book is that a century later an author is able to bring us fresh stories of the experiences of individual little known soldiers. It is a moving tribute but also now retrieves their voices and immediacy of the experience of battle through their letters. The story unfolds in a logical manner. The British colonial background of the families, all of 1820 settler stock, is given in a quick introductory chapter. The context becomes the origins of the Eastern Cape British settler community, the lives of ordinary farming families or childhoods lived in a quiet rectory or as a motorboat driver on the Kowie River. There is a deft sketching of schooling, family life and early jobs taken up after these boys left school.

Satchwell has researched with enormous care, compassion and dedication school records, local archives, newspaper clippings, service records, war diaries and most revealingly the personal letters written by the five doomed men. The research is impressive and the story that emerges is heart breaking and in microcosm stands for the loss of so many more, the thousands who went to war with hopes, patriotic sentiments, an enthusiasm for travel and adventure who never returned. It is a compelling and moving little volume and by concentrating in detail on what happened to five man makes an enormous impact. The five strands of these life stories are tightly woven and are kept as the main focus.

There is an excellent account of the Battle of Delville Wood of July 1916 and the Battle of Bute de Warlencourt some three months later from the perspective of men who fought and died. By the end of October, these five Memorial Soldiers were all dead. The final chapter deals with the aftermath of obituaries, grief, burials, graves and memorials. It is all  absorbing, poignant, tragic, and for me very personal, as my own great uncle fought in and survived Delville Wood only to be killed in October 1916 at the Bute. These five young men stand for those 18 600 casualties and the 6 600 South Africans who died or were killed in the Great War. Satchwell relies on the now standard works of Uys for the contextual background to Delville Wood and on the work of Peter Digby, but this is not a military history about generals or strategy. Nor is it about the politics or economics or statistics of war. It's about the short lives of five young men who never returned to their homes. The chances of being killed in the First World War was about one in seven or eight, so in a sense by researching five names on a war memorial, it is a little unbalanced.

The book includes many excellent black and white photographs as well as useful explanatory maps. Sources used are found in the end notes in each chapter and in the acknowledgement page, but there is no bibliography and no index. The book is self published. This book makes an interesting contrast to the James Bourhill book of his family history and another group of men but in that story his ancestors all survived (click here to read the review).