Your Loving Son, Yum - The letters of Grahame Alexander Munro to his family 1915-1916 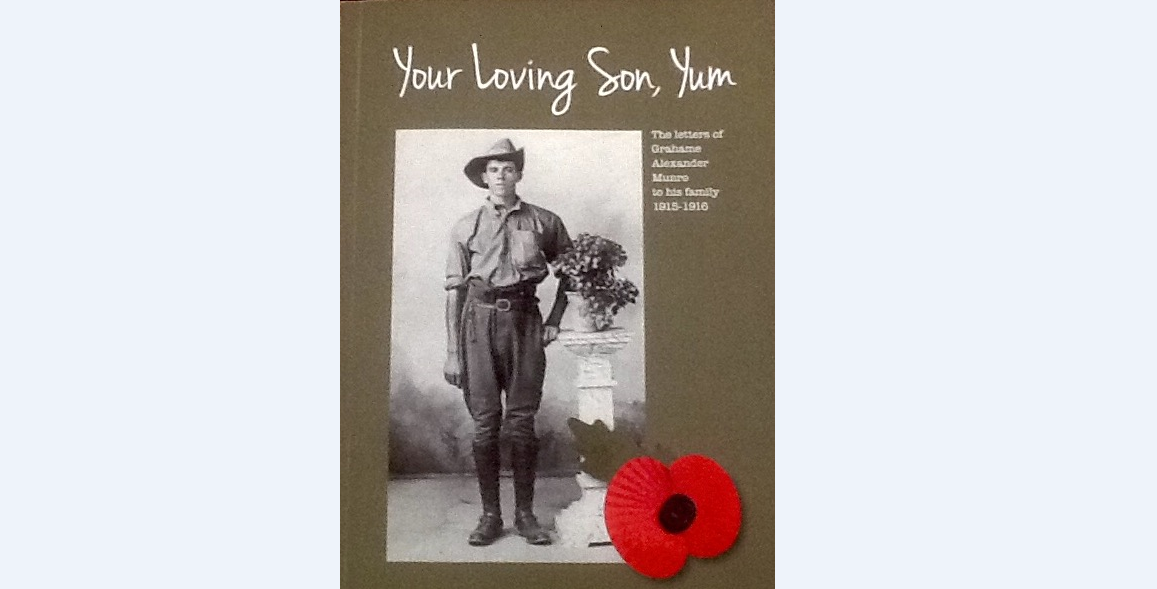 2016 marks the 100th anniversary of the Battle of Delville Wood. With that heroic battle on the Somme and the horrible baptism of fire of the South African forces, the other theatres of war slipped into second place. South Africans fought and lost their lives in German South West Africa (today's Namibia), North Africa, German East Africa, Mesopotamia and the Western Front in France.  A century later it is worth remembering the human loss and sacrifice and how participation in overseas battles shaped nationhood and sharpened nationalisms.

This book is a collection of poignant letters of one such South African soldier, Grahame Alexander Munro who was only 18 when he volunteered for military service and over a period of 18 months served in two military campaigns in German South West and in German East Africa. He died of wounds in December 1916 aged 20. A young life gone in a flash and only now remembered because he wrote letters home which were saved. Grahame came from a farm on the outskirts of Grahamstown in the Eastern Cape and came of 1820 settler stock via his maternal family the Palmers. He attended St Andrew's College in Grahamstown, left school at 17 and joined his father farming at Slaai Kraal, a small farm of 750 hectares.

Restless boys hunger for adventure and when war was declared Grahame enlisted with the 8th Mounted Rifles based at Middleburg in the Eastern Cape and from there entrained for German South West Africa. His first spell of service was relatively short and by late May he thanks his family for their parcels but also says "cancel money, coming home ". His mother must have breathed a sigh of relief.

Judge Kathleen Satchwell is passionate about First World War history and has applied her fine scholarly mind to presenting the letters of Grahame (his nick name was "Yum") written to his parents and family during his two service years. Young men, and in this case, it was a boy going into battle, seldom think about their own mortality and the risk of death in war. The letters are all the more poignant for their simplicity, innocence and tell of every day routines, parcels from home, food (the raw potatoes for a meal) and diet and for example, simple observations of a farmer eyeing local sheep. The voice of a young man writing comments about his daily life and a travel adventure, to reassure a mother and a father. The footnotes setting out context and explaining comments have been magnificently researched and are critical in adding value to the letters.

Satchwell explains that in July 1915 all units of the Active Citizen Force were demobilized and Grahame returned home to work on the family farm. In January 1916 Grahame joined the South African Motor Cyclists Corps as an alternative to joining an infantry brigade. There follows a series of letters from Potchefstroom where he trained. Satchwell writes an effective background chapter on the military campaign in East Africa and this complements the series of Munro's letters home, covering the period June to November 1916. Sadly Grahame Munro was wounded in the abdomen while on patrol on 17th December and died on the 18th December. He was first buried at Ulete farm, but later reinterred and buried at the Iringa Military Cemetery. Satchwell includes a photograph of the grave, a copy of the burial return, the service record and finally a grateful thanks for a life given for King and Empire from George V. Grocott's Mail carried a roll of honour notice of his death.

In Britain the Imperial War Musuem has endeavoured to gather family letters, memories and memorials of men. It makes for a remarkable archive. In South Africa the preservation of letters from war is also encouraged by the Military History Society but it requires a passionate and dedicated researcher to take the next step of research, editing and publication.

Remarkably, Grahame's letters were preserved as a precious family inheritance and in the 1960's were lodged with the Cory Library at Rhodes University. Satchwell has given meaning and enables a much wider readership to share these personal letters. It is a wonderful tribute to one young man, really a boy who was on his way to manhood when he died. It stands for the many such records and experiences of others who went to war and never returned, but whose letters never survived. I read the letters with great interest, as this could have been the story of my own great uncle who went to France for a lark and an adventure, fought at and survived Delville Wood only to be killed three months later on the Somme. All our family has to remember the life of young Bernard Barbe is his name engraved at the Thiepval Memorial to the Missing, the Commonwealth War Graves Commission (CWGC) military records and a single photograph. I would treasure letters such as these, who knows whether there were such letters and if they survived? But here we have the miracle of a set of letters from a soldier preserved, beautifully researched, presented in a coherent sequence and published as a permanent remembrance. The survival of these letters gives meaning to a life lost too soon in warfare.