In the Footsteps of Gandhi - A Fascinating Work of Local History 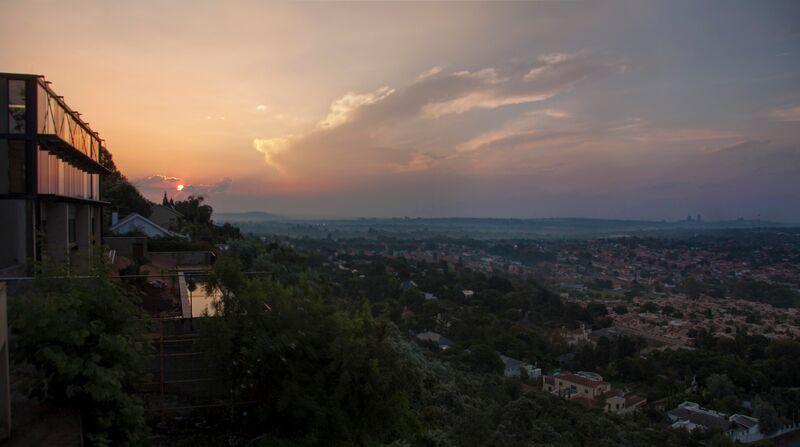 In the Footsteps of Gandhi An illustrated history of Johannesburg's Linksfield Ridge and environs by Alkis Doucakis, 2007, published by Colors, illustrated, 80 pages. This is a fascinating work of local history. It starts with the advantage of an appealing title, hanging the history of the north eastern suburbs of Johannesburg (Linksfield Ridge, Linksfield, Orange Grove, Norwood, Sydenham, and Observatory) to the association of Mahatma Gandhi and the Johannesburg German,  Jewish architect Hermann Kallenbach in the early years of the 20th century.

Kallenbach was an immigrant German architect from Lithuania & Germany (arrived in 1896) who became a property developer. He was highly successful in his profession, over the long haul, after settling in Johannesburg and is a remembered and known in the city for some well-regarded period buildings ranging from churches to synagogues from office blocks to retirement estates.

Kallenbach collaborated with a succession of prominent Johannesburg architects (Phillips, Reynolds, Kennedy and Furner) from the 1890s when he arrived in the town until his death in 1945. His contribution to the making of the city in his lifetime was considerable. However it was his fate that his fame was a consequence of his lifelong friendship with Gandhi, who he befriended most probably as early as 1903. Theirs was a close, spiritual and possibly homoerotic friendship, most intense between 1908 and 1914 period, when the two left South Africa. However, while Gandhi returned to India, Kallenbach was interned as a German national in England during the course of the First World War. Had Kallenbach gone on to India at that date he might never have returned to South Africa and the story would have been very different.

Gandhi also an immigrant from India (he arrived in South Africa in1893) practiced as a lawyer, encountered racism and political opposition, and campaigned for humanitarian and practical improvements in war, and peace. His activism, his non racial reaching across colour and class boundaries shaped his ideas about satyagraha and passive resistance. He confronted the colonial and later Union government authorities in Natal and the Transvaal with vigor and success. It was his seemingly unlikely friendship and his enormous influence over Hermann Kallenbach that gave Gandhi the funding and finances to maintain his experiment in the establishment of communal living at Phoenix in Natal and to create Tolstoy farm near Lawley in the Transvaal.

From 1908, Gandhi lived with Kallenbach for 18 months in the simple twin rondavel home, designed by Kallenbach in Pine Road, Orchards, then shared an isolated tent encampment for seven months on the undeveloped Mountain View hillside before launching the communal collective farm at Tolstoy farm (purchased by Kallenbach).

It was Kallenbach's karma to befriend Gandhi but it was both his good fortune and perhaps his misfortune that this should have been the intense and best known relationship of his life. The link to Gandhi gave Kallenbach an enduring place in the Gandhi story and he is remembered because of the friendship and searching questions being asked about their friendship. The Kallenbach papers have recently been bought by the Indian Government from Kallenbach's heirs. The family photo albums are all now on line and on sale from a German website promoting the Gandhi link. Kallenbach featured as a key character in the Richard Attenborough 1982 biopic of Gandhi. Ben Kingsley played the part of Gandhi and Günther Maria Halmer was Kallenbach.

I have read two recent books (2012) exploring the friendship and relationship of Gandhi and Kallenbach, "Great Soul Mahatma Gandhi and his Struggle with India" by Joseph Lelyveld and "Soulmates the Story of Mahatma Gandhi and Hermann Kallenbach" by Shimon Lev. Lelyveld's book has sparked considerable controversy. The sadness is that Kallenbach's own story as a premier early Johannesburg architect, investor and property developer who had an eye for prime view sites has been overshadowed by the Gandhi story and remains untold. Kallenbach never married.

Unfortunately, the very title of this book hides Hermann Kallenbach, yet it was this man who more than any other shaped this swatch of suburbs to the north east of Johannesburg and who together with his professional partners, men such as Reynolds, Kennedy and Furner contributed massively to the city's architectural legacy and landscape. It is that story that still remains to be researched and related. 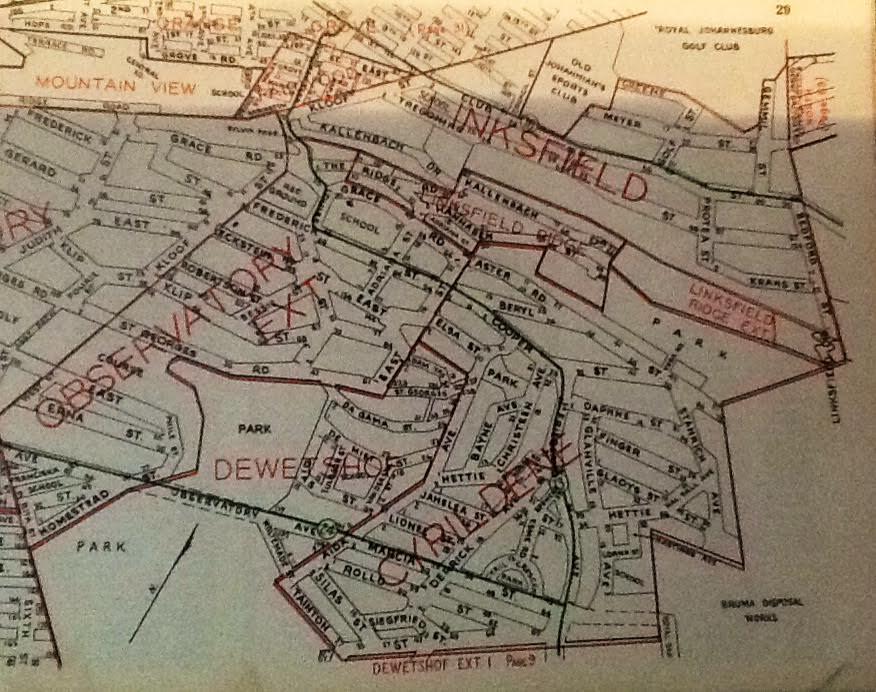 After the First World War Kallenbach returned to Johannesburg, reestablished his career as an architect, became the purchaser of a large expanse of undeveloped farm land and who proceeded to plan the township of Linksfield Ridge together with his business partner A M Kennedy who built his house on the ridge, a property called Steepways. He was also the property developer of much of the Linksfield suburb. Later A Stanley Furner joined the practice.

This lavishly  produced book by Doucakis was published in a limited edition in 2007 of only 300 numbered copies and as so many copies were bought up by Indian collectors and libraries it is one of those extraordinary hard-to-find items of Johannesburg Africana. The book was on my wants list for a long time and I had hoped to find the lacunae of the Kallenbach story here.

Doucakis’ research is diligent and his book holds a mine of information. The style of writing is entertainingly anecdotal and presented in digestible (but not always chronologically arranged), bite sized snippets. There is a beguiling mix of hearsay and oral history followed by efforts to find the truth. For example, the section with the heading, "Enter Gandhi: Hope Road Mountain View 1902 to 1909" is a stretch, as Gandhi did not come to live with Kallenbach in Mountain view until December of 1909. Doucakis' passion for local history, and chasing after the detailed evidence does not always lead him to logical interpretations. The methodology is fragmentary and descriptive. Coherence is lost when the story swings back to Gandhi, whereas the man who ought to be at the core of the book is Kallenbach.

I would have liked more of an attempt to place these north eastern suburbs in the context of wider Johannesburg history, to discuss changing settlement patterns, population densities or the economics of the development of the city. But local history means local detail without too much of a concern about the big picture history.

Linksfield Township was only finally gazetted in 1922 and Kallenbach and Kennedy bought more portions of the original farm Doornfontein in a series of transactions not recorded in the Deeds Office farm registers. They then consolidated the portions to create the suburb of Linksfield, the source here seems to be the Sarid biography of Kallenbach. I would have liked more about the connection between the Johannesburg Golf Club (later the Royal Johannesburg) and Linksfield. Anna Smith gives a succinct account of the origins of Linksfield as a suburb, but clearly the township was not a single seamless process.  A good result that follows from careful local research is that new questions are raised, and the next researcher picks up the trail. 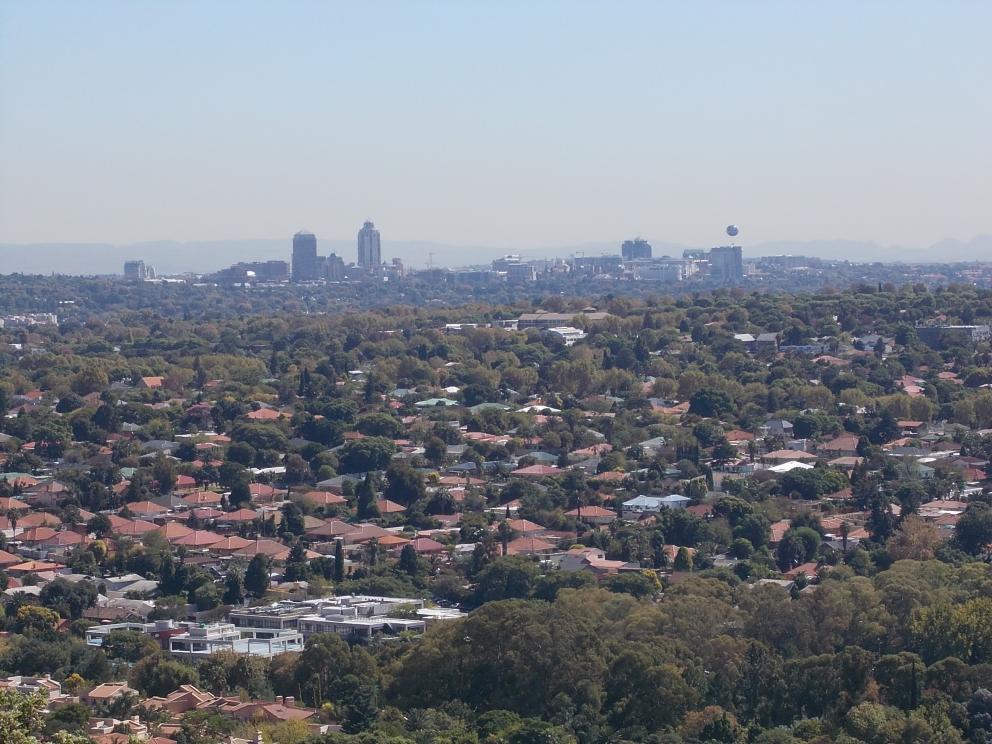 The books provides a great deal of information, linking Kallenbach to the ownership and development of the township of Linksfield Ridge.  Kallenbach built his own house at No .5 New Mountain Road and he personally built the road from the bottom of Sylvia Pass to his house;  this is the road that is today the lower portion of Kallenbach Drive, it was once a “private road”. Kallenbach granted the Municipal council land on which to construct Sylvia pass, he did not single handedly build the pass (that is an assertion that came out of a 1945 newspaper article). 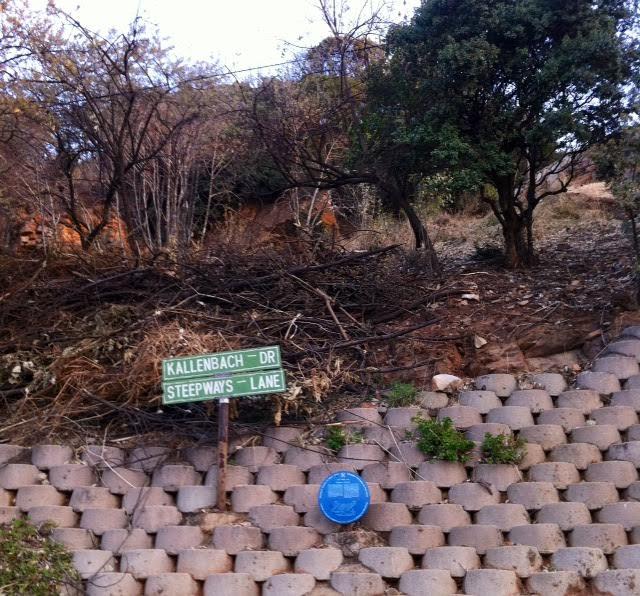 Linksfield Ridge was the only Johannesburg suburb established by an architect. All of this happened well after Mahatma Gandhi had returned to India, but then there is a flashback to Gandhi meditating and enjoying open air showers with Kallenbach at a property on New Mountain Road. Matching precise date to exact place in chronological sequence is often difficult. An oral interview with one informant reports on the lady meeting Gandhi sometime in the thirties, but the Gandhi was a son of the Mahatma, namely, Ramdas Gandhi.

The end paper of the book reproduces a helpful township plan of what became the suburb of Linksfield Ridge, with the signature A J Cutten. This map shows the layout of the stands, roads and servitudes, and the text gives the date as October 1938. I was interested in this plan as our family owns a 1960s house on one of the stands of this suburb and the property still carries the same erf number in the municipal rates roll. However the diagram does not show either Sylvia Pass or that narrow lane like section of Kallenbach that led from the base of the pass as a winding road and then linked up with the main Kallenbach Drive . The better map is extracted from a 1960s edition of Holmdens. 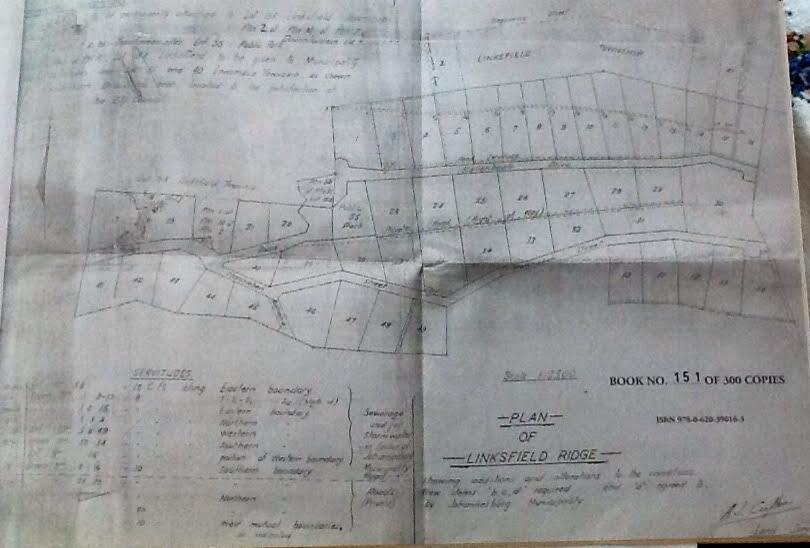 Nonetheless, the value of this book lies in the efforts to document and collate different sources of local history information. It certainly adds value to our knowledge of these North Eastern Johannesburg suburbs and one wants the author to take the story beyond the Gandhi-Kallenbach era. The book also ranges widely over the history of Orange Grove, Norwood, Cyrildene, Observstory, and De Wetshof. There are some 124 neatly captioned, wonderful historical and current photographs almost all in color with photo credits acknowledged. The research sources have been meticulously listed in the endnotes. There is a useful bibliography of primary and secondary sources and a sound index.

In summary this book is a collectable and desirable book for anyone keen on Johannesburg history or if you happen to be a resident in one of these suburbs. The author's passion for his part of the city shines through and one wishes for more local historians with this same commitment and capacity writing about their corners of the city.

The book has a particularly fine aerial panoramic view of the Linksfield - Mountain View Ridge that wraps around the awkwardly shaped long book .

2015 Price Guide: Price now about R1200, when a copy comes up.  It is a book that should go into a revised second edition.