A book that celebrates the glorious heritage of Paarl 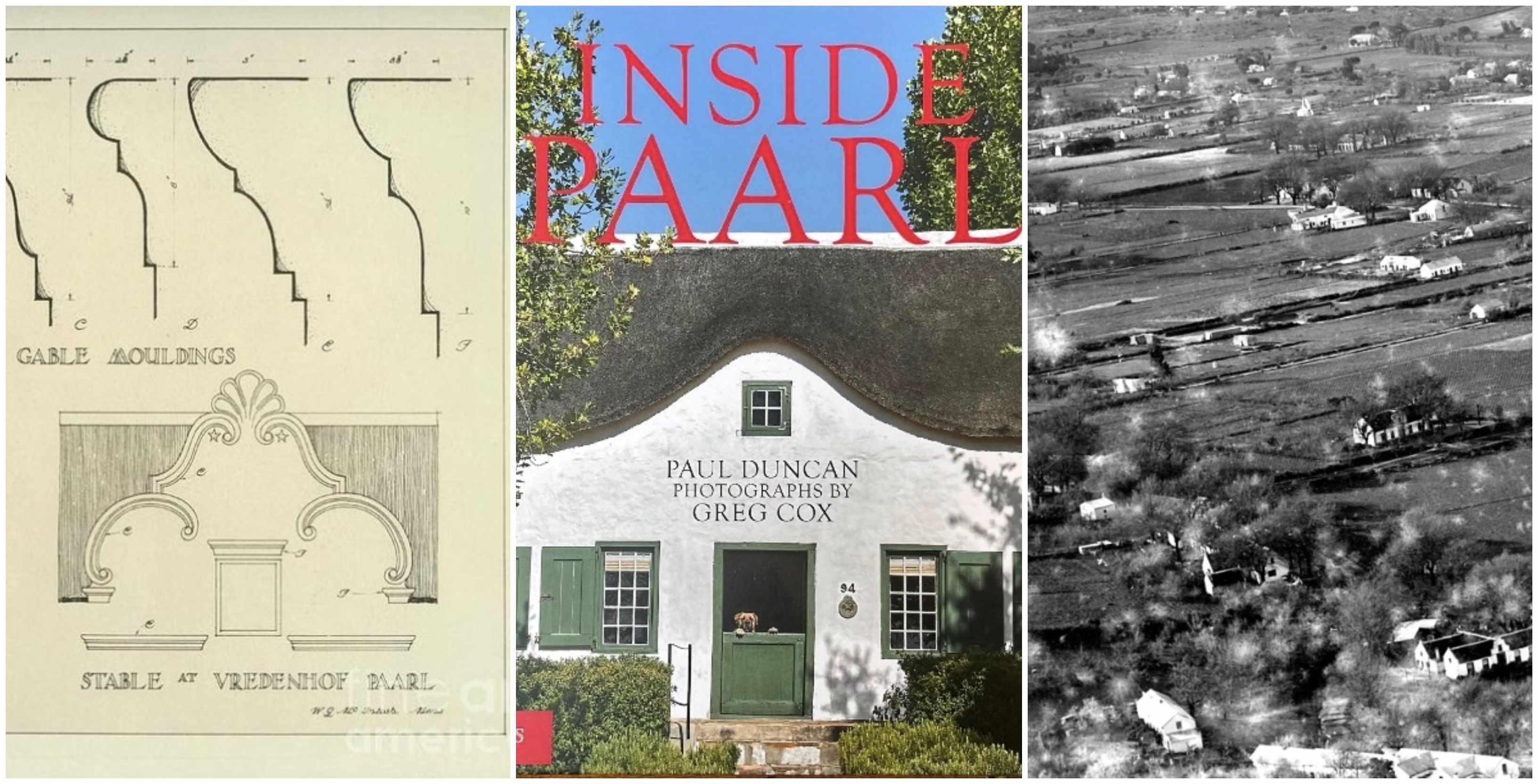 Here is a book that celebrates the glorious heritage of Paarl, that lovely Western Cape town less than an hour’s drive from Cape Town. Paarl is known for its vineyards and its wine, the foundations of the Afrikaans language, its cultivated cultural roots and its many fine examples of Cape Dutch architecture. 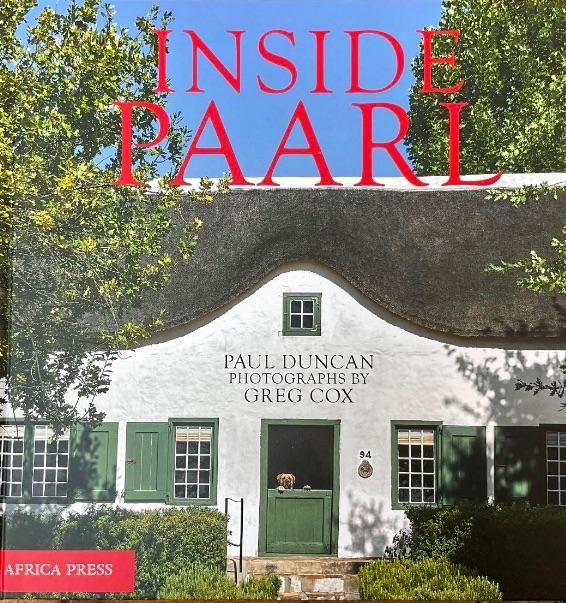 This is a new book developed by Paarl people to show off the best of Paarl’s treasures. It is a handsome book in its many photographs by Greg Cox and in the succinct introductory and explanatory texts by Paul Duncan. Duncan is experienced in writing and presenting other towns and cities as he initiated the Hidden Series with photographer Alain Proust. The heritage community has been enriched by the books Hidden Johannesburg, Hidden Cape Town and then Inside Kimberley all by Paul Duncan; the baton was passed on to Johan Swart and Pat Kramer with Hidden Pretoria and Hidden Karoo. Now Duncan has teamed up with a new photographer and with the backing and support of Carol Retief and the Lambert Retief Family Trust, and drawing on the historic photographs of the Gribble collection in Drakenstein Heemkring (or archive), a beautiful book revealing the details of art works and interiors of a selection of special places in Paarl has been published by Africa Press. 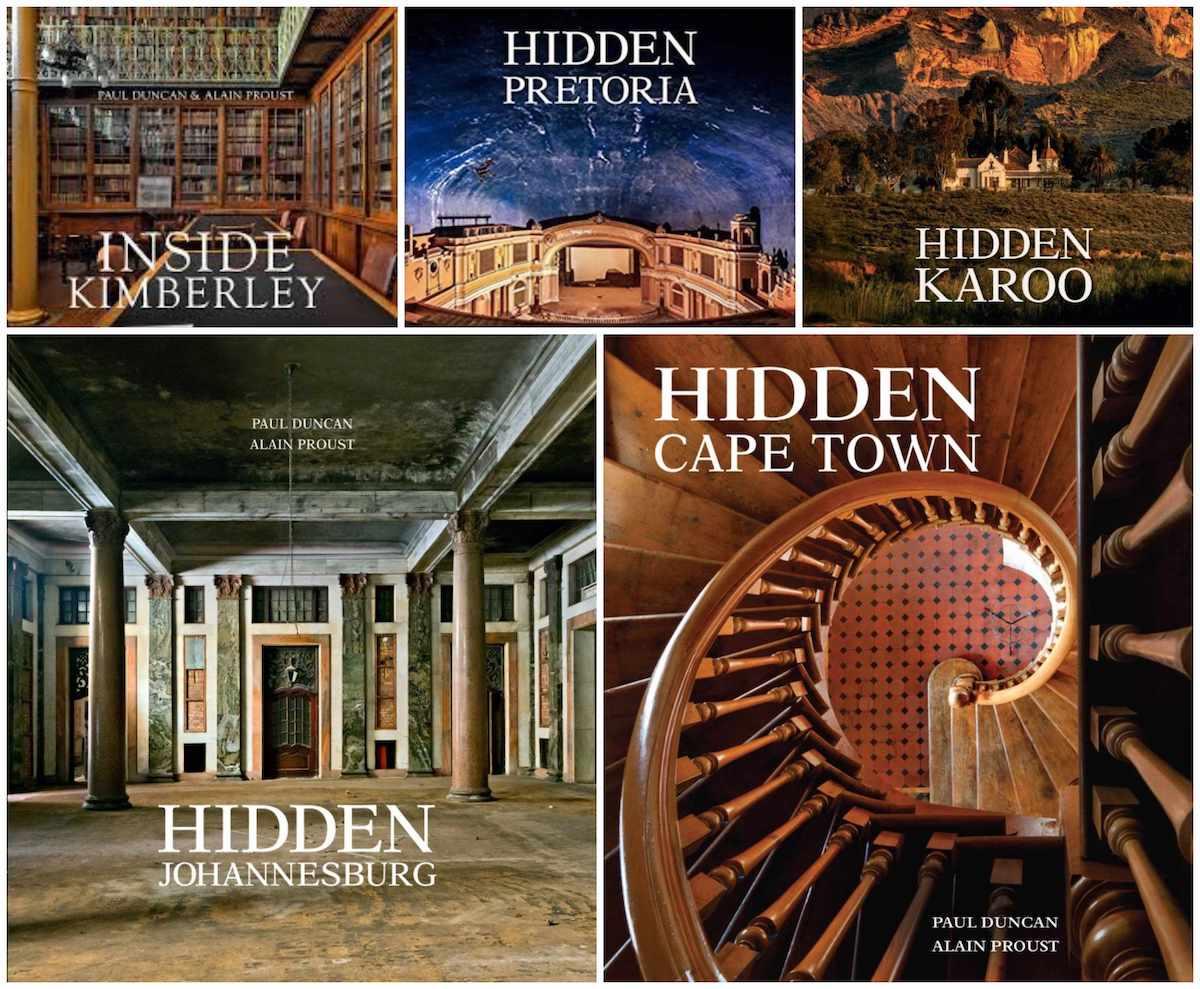 The titles in the 'Hidden Series'

The book is dedicated to the brothers Nicol and Lambert Retief, who were printers and media men from Paarl, who very simply “loved their hometown”. Lambert died in 2017 and Nicol died in 2020. Carol Retief has led the project and all returns from this publication will go to the Gift of the Givers. It is a wonderful gesture to two impressive sons of the town who were well known in media circles. Carol sees the book as a means and method to record the beauty of the town as it currently looks and to capture the heritage. She commented in a warm email: “There is so much more beauty but one has to choose. As we all have noticed recently nothing is forever and nothing is untouchable.” The book successfully delivers on that commitment. 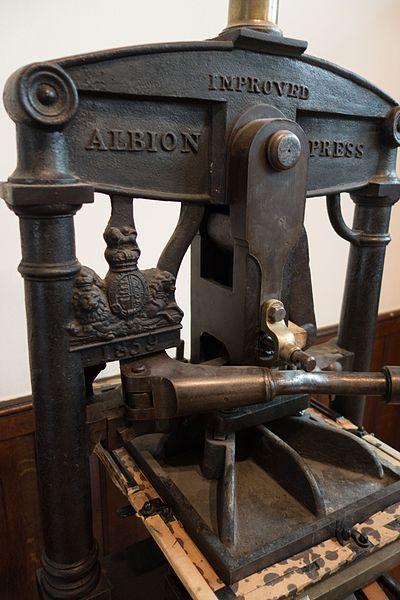 The literary output of Paarl was produced on hand operated printing presses such as this example of an English Albion Printing Press. There is an example of an Albion in the Afrikaans Language Museum of Paarl.

The author, Duncan and photographer Cox have chosen 20 places of heritage status to make sure that Paarl becomes your next destination. If you are keen to explore the Western Cape you will be well rewarded. This is a book for Paarl denizens - they can be justly proud of their town and its history, but the book presents an opportunity to share much with visitors, tourists and road trippers. It is the photographs in the book that will make you come to Paarl and fall in love with not only the local wines but also famous main street of the town and all those fine examples of Cape Dutch gable architecture. There are also a number of old archived black and white photographs of Paarl which adds to the contrast between “then and now”.

Duncan explains the context in short introductory essays for each chapter and the splendid photographs show off the exteriors and interiors of some unusual places. It is a well chosen mix of schools (La Rochelle Girls High School, the Noorder-Paarl High School and the Paarl Gymnasium), churches (the Strooidakkerk and the Toring Kerk and Kerk Saal), the synagogue of the Paarl Hebrew Congregation, the Berg River mosque or masjid; fine craft businesses such as FS Smit, Coopers serving the wine industry with barrels and vats and JA Clift (stone masons, quarry and artists in stone); the old homes of Paarl such as De Oude Woning (now the Drakenstein Archive), and the old KWV headquarters at La Concorde. Then there are the family homes such as the home of the Raymond family at 94 Mill Street and Die Hoogte at 34 Main St (the home of the important South African architect, Wynand Louw). Louw was the architect of the Paarl Town Hall, completed in 1928, the style a mix of neo-classical and Cape Dutch revival style. The museums featured are the Old Pastorie, now the Paarl Museum, the Afrikaans Language Museum at Huis Gideon Malherbe and Klein Simonsvlei on the Simondium Road where you will find an unusual collection of quality classic American vintage cars. The natural beauty and landscape of Paarl is presented in a chapter on the Paarl Mountain and another on the Taal Monument or Afrikaans Language Monument. 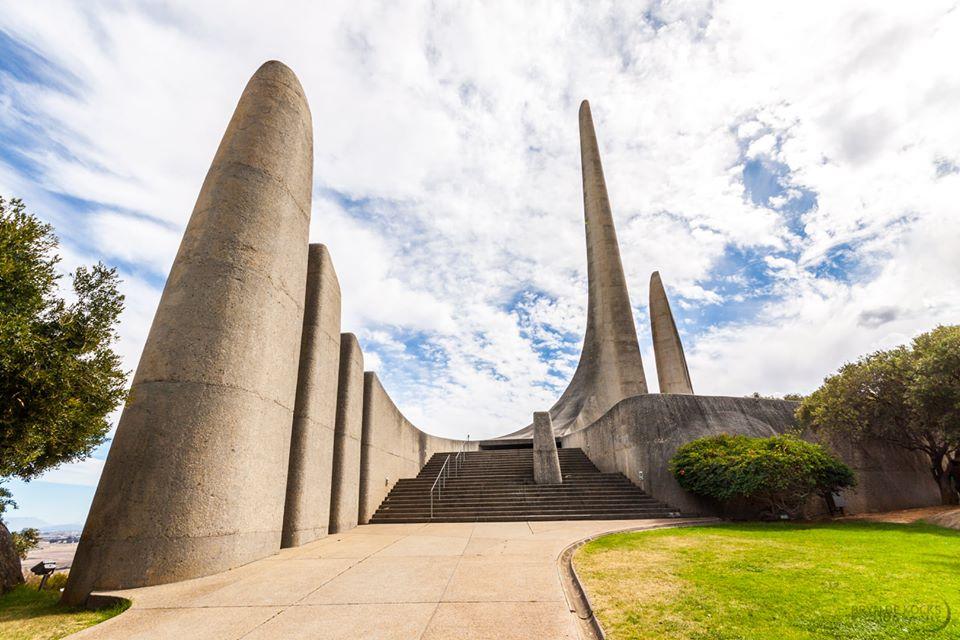 I should declare an interest as Len Raymond’s house and dog Sheba feature on the cover photograph. The heritage house at 94 Mill Street earned the old National Monuments Council's recognition with a bronze medallion. Len explained: “The house was proclaimed in the early 1980s, but the plaque was stolen. I have an original cast replacement but display a fibreglass version. All the old NMC monuments in Paarl were graded.“ However, with the new National Heritage legislation and a new system, most of the local town monuments were reassessed as having Provincial Heritage Site status. Len adds: “We have a tile plaque as a Western Cape Provincial heritage site but as the house stands on a corner right against the road, it is placed on the side gable wall.” Paarl’s famous main street was threatened with road widening proposals but it was the obvious heritage value that resisted and prevented demolition. 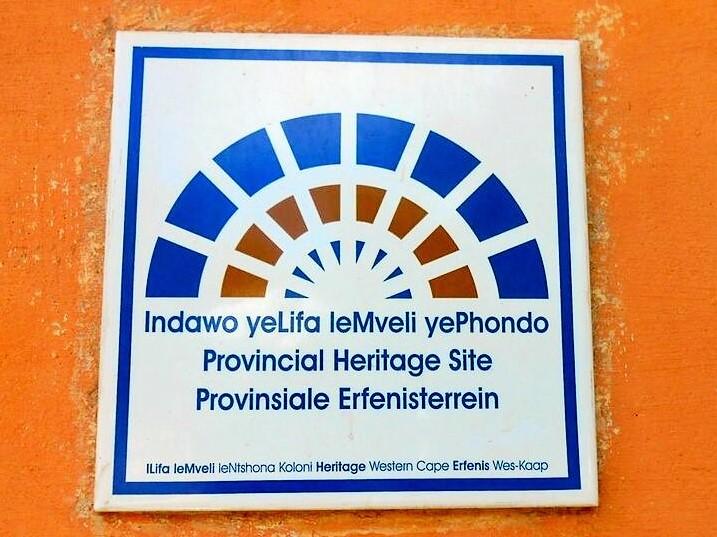 Len was the chairperson of the Heritage Association of South Africa and has had a long connection with the predecessor body, the Simon van der Stel Foundation. Through our mutual passion for heritage, Len and I are colleagues and I was elected chairperson of HASA at the last AGM. I have never visited him in his historic home, but I shall be angling for an invitation and a personal tour as I am now enthused by this book. He runs the Heemkring (the local archive) and a rich source of historical information is the Gribble collection (some 40 000  photographs of Paarl and its inhabitants). The Gribbles ran a photographic studio that only closed in 1987. It is the archives’ largest single collection. There is also the Dekker/Webb collection - it is the most extraordinary legacy, but only a very small selection of these old photographs could be presented in the book. Len has generously sent me a few photos from the Heemkring to share with heritage enthusiasts. 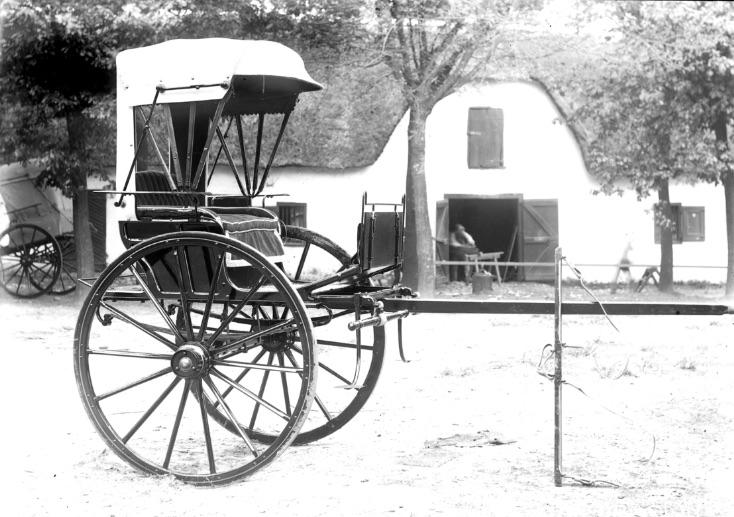 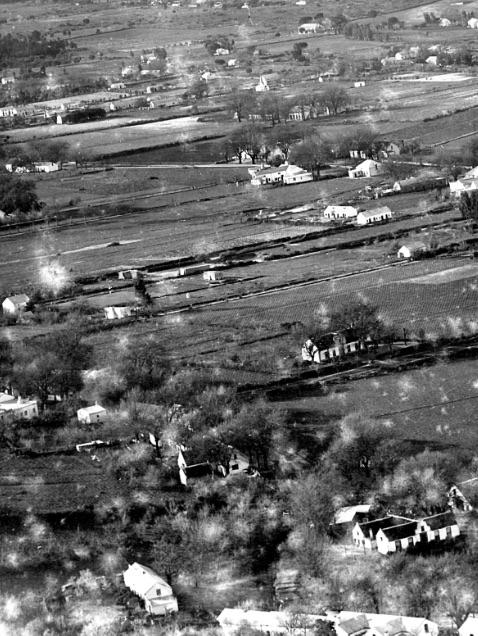 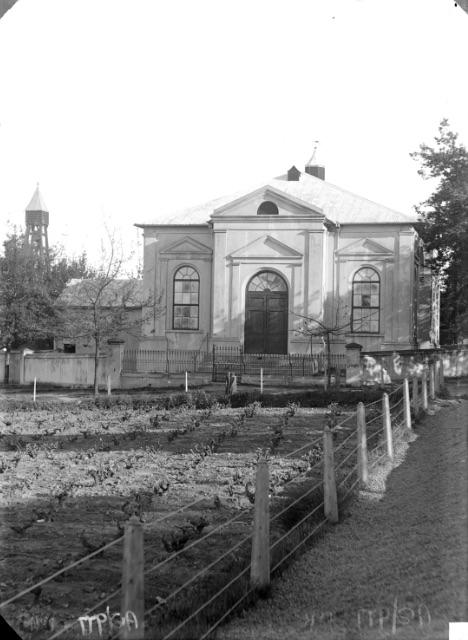 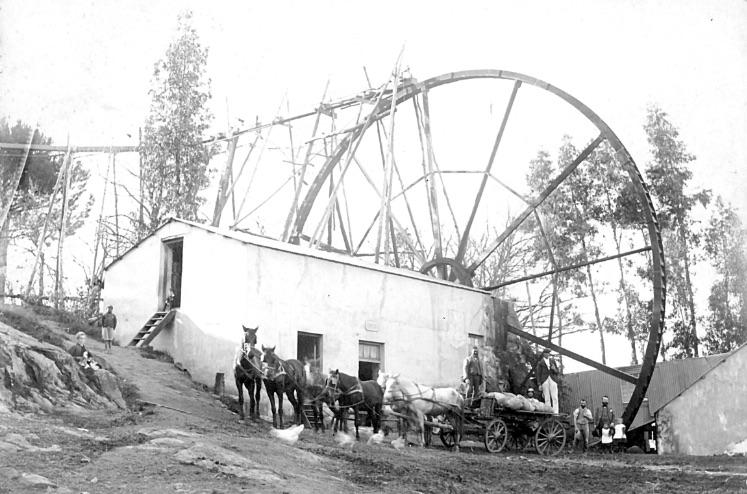 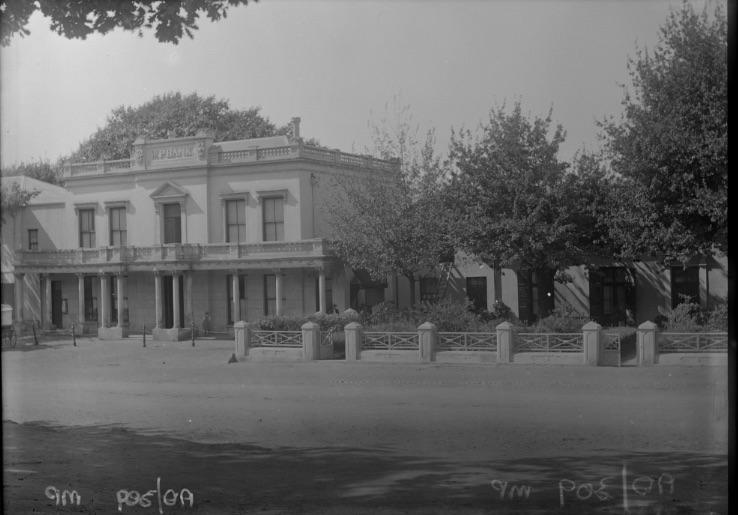 Paarl is South Africa’s third oldest town, though it was never founded or laid out unlike most other Cape towns. Paarl grew up around its Huguenot Church which moved to Suider Paarl in 1717. Whilst there was a concentration of wine farms along the Drakenstein Valley, the VOC government of the early 18th century also encouraged the settlement of artisans and as a result shoemakers, blacksmiths, tailors and carpenters added to the diversity of the area and made the town. It is a scattered town with a main street about seven miles long. But there is a prior history. The earliest expedition to the Berg River Valley was during the time of the VOC when Abraham Gabbema went in with goods to trade for cattle.

The name Paarl came from the Diamond and Pearl Mountains with their granite boulders - and the geology of the region still dominates the landscape. One has to travel the length of the valley to absorb Paarl - the Jan Phillips Mountain drive introduces the granite outcrop, the largest in South Africa and 500 million years old. Lady Anne Barnard wrote about the granite domes shaped like pearls. This is where the Paarl quarries are located, the source of five different granites. I was fascinated to learn that it was JA Clift of Paarl who supplied the stone for the Herbert Baker designed Rhodes Memorial and included in this book is an early double page photo of the construction. The book is worth acquiring for this specific archival item.

There is a little known connection between Paarl and Johannesburg. Paarlshoop was one of the earliest suburbs of Johannesburg. Its origins date back to 1886 when one of the earliest mining camps was Paarlkamp also sometimes called the Afrikanerkamp because it was here that some of the earliest hopeful prospectors who hailed from Paarl in the Western Camp settled. The Paarlshoop township (close to the Main Reef road and about 4 kms from the centre of the town) was surveyed by Auret Pritchard on 8th September 1886 a week before Raandjeslaagte was proclaimed. One of the earliest of pioneers was Reverend  SJ (Stephanus Jakobus) du Toit, leader of the first Afrikaans Language Movement; he formed the Paarl-Pretoria Gold mining Association; it did not prosper and du Toit eventually returned to Paarl penniless having lost an estimated £140 000 in his Transvaal speculations.

The Duncan book has stimulated me to look for other books and articles on Paarl. There is a lot of Paarl literature out there. I found a marvellous article by Jozef Smit on Paarl architecture with some excellent maps showing Paarl farms in 1850 and again in 2005 (Vernacular Architecture Society of South Africa, Edition Number 25, 2012). So much has been written on Paarl but one has to look for it in more general books on Cape town and homesteads. Professor Geoffrey Eastcott Pearse, Professor of Architecture at Wits, wrote Eighteenth Century Architecture in South Africa (1933, 3rd edition 1968) and Paarl featured strongly in his magnum opus. Pearse worked with architects and students who travelled with him to survey the important old buildings of the Cape. An example of one of the plates is the one below showing styles of gables in Stellenbosch and Paarl. 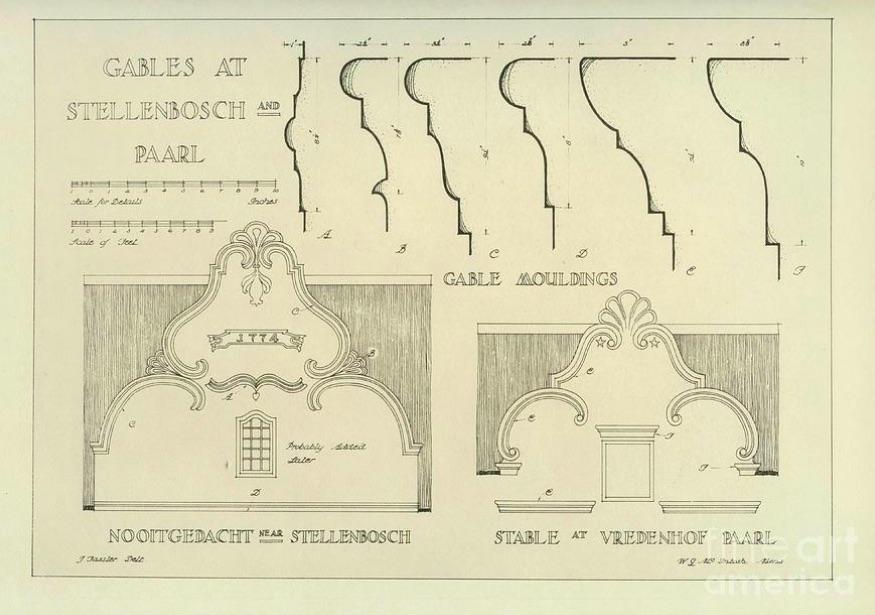 Gables at Stellenbosh and Paarl

Pearse was also the author of Eighteenth Century Furniture. Hans Fransen and Cook have a great chapter on Paarl in their book The Old houses of The Cape (Balkema, 1965). Another overview of Paarl architecture can be found in Phillida Brooke Simons’ book Cape Dutch Houses and Other Old Favourites (photographs by Alain Proust) published in 2000 by Fernwood Press.

In 1987 to commemorate the tricentenary of Paarl, the Municipality of Paarl produced the book The Paarl Valley, edited by AG Oberholster and Pieter van Breda. I would love to obtain a copy of this book. 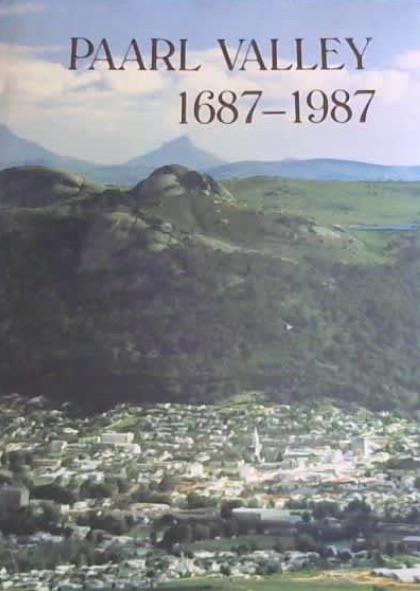 The Duncan book is a visually appealing introduction to Paarl. The book would have been much enhanced by a map. I would also have welcomed a bibliography and an index. Nonetheless, the book becomes an attractive companion volume to the earlier book in the Africa Press Inside series (Inside Kimberley).

Paarl is fortunate in its active heritage society, passionate curators and enthusiastic benefactors. The result is a splendid rich photographic study of the town and its heritage.