Review of The House of Tshatshu - Power, politics and chiefs north-west of the Great Kei River, c1818-2018

This is a history of chieftaincies, tribes, rivalries, land congestion, conflict over land and a repeated pattern of rural violence placed in historical context but also with an eye on the intractability of current politics. The background is set with a quick documenting of early history on the Tambookie frontier of the Eastern Cape of South Africa (take a look at the map of the Tambookie or nort-eastern frontier in circa 1845. The focus switches to the colonial attempts to organize and order the Eastern Frontier of the Cape Province, an area of South Africa much fractured and fought over in frontier wars of the 18th and 19th centuries, when boundaries and borders shifted according to movement by people, a British military presence, land appropriations and seizures, and imposed settlements in the hopes of pacification.

The most stimulating aspect of this book is the debate about the dichotomy between traditional and modern leadership in a democratic South Africa. A study in microcosm, this academic work raises the question of a future role for the traditional chiefs in a modern society (the analysis also applies to other parts of South Africa). By extension, this study  makes a contribution to the imagining of a new future in the 21st century for rural South Africa. However, we should not be blind to the fact that since 1910 and the creation of the Union of South Africa the trend across the country has been towards urbanization and the majority of  South Africa’s population live urban lives. The rural component has been a steadily declining percentage across the country and by 2016 the rural population had fallen to 34.7 per cent (World Bank development figures). So here is the nub of the matter - if the chiefs are the traditional structured rural leaders what happens to their role as their citizen depart for the bright lights and city opportunities? But perhaps that is the wrong question and one needs a more nuanced line of thought that grasps not only the speed  and relentless approach of urbanization but also the slow pattern where people belong in two worlds and retain their rural links, possibly even two homes over several generations.

The House of Tshatshu - Book Cover.jpg 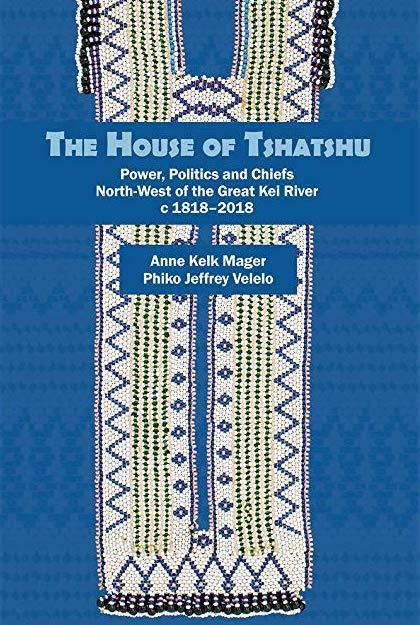 Back to  the history of the frontier. The authors, Mager and Velelo, provide a detailed explanation of how in the 19th century the British colonial administration used a strategy of military defeat, humiliation and a loss of tribal independence and at the same time cooptation into the current system. The study proceeds to the more recent past and explains how during the apartheid era of the 20th century, chiefs were expected to be compliant and a civil servant of government. Power was given to those prepared to bolster the Bantustan regimes and displace those who opposed that framework. Bantustan chiefs could beguilingly buy into that fantasy land narrative as the illusions of independence came the giving of local authority and assured finance. Come post 1994, Mandela offered another model of conciliatory inclusiveness to both whites and chiefs, but expected (certainly from the rural chiefs) support for the ANC trajectory towards independence. Towards the end of the 20th century, it was the Congress of Traditional Leaders of South Africa (CONTRALESA) that articulated the aspirations of at least some chiefs and wanted a privileged space in the new democracy for traditional leaders.

It becomes a perplexing conundrum as to where tradition and the chiefs can be fitted into local, rural and provincial government in a way that facilitates good governance and modernity. If a province (namely the Eastern Cape), known for the failures of government and the loss of capacity, is to find a direction and a future there has to be both an understanding of the past and the complex layering of historical actors and actions and at the same time a practical and viable development policy approach for the future. This book may well encourage planners to embrace and learn something from history.

The two authors, coming from different backgrounds but working collaboratively, have written a detailed history of a specific people, the House of Tshatshu, facing conquest, dispossession and “un-naming”. In 1832 Sir George Cathcart, the Cape British colonial governor pronounced that the amaTshatshu chieftaincy no longer existed. But this Thembu chieftaincy did not disappear. This study makes a significant new contribution to South African history as, in following the fortunes of the chiefs and their people who belonged north-west of the Great Kei River over two centuries, it offers numerous pointers and some subtle advice to current policy makers and government grappling with age old conflicts.

The book is a heavy read because it is a serious and dense academic study. But it repays the effort of reading it and if one of my measures of a good book is that I learn from the research of the authors, then this book passes with flying colours. Of course it is a difficult book because it is a dense microcosm of local history and looks for the underpinnings of change though extrapolating from the particular to the general. I would have liked more links to national or even international issues of land and how development and modernization offer both obstacles and opportunities for deep rural people with ancient histories, played out against the trend towards urbanization. Nonetheless, this study enriches the historiography of South Africa and the authors are part of a new wave of historians who write history from below and from the perspective of the people who have endured varieties of colonialism, apartheid, Bantustan government and now face the challenges of independence, and new provincial administrations with a recent 20 year old record of incompetence and mismanagement in the Eastern Cape. Here is a high quality competent research effort and the Appendices add to the rich detail. There is a solid bibliography and the index can be used  a  guide to subject matter.

Perhaps the way into the book is to start with the final chapter on imagining and re-imagining western Thembuland as it is this final chapter that reveals all too starkly and clearly the intractability of the issues of the Eastern Cape old Tambookie frontier. The ANC government finds itself with as intractable a problem as that facing the 1830s Cathcart administration. It is not often that I advise reading a book from back to front, but in this instance it’s the final chapter that caught and held my interest. I was able to then retrace and track into two centuries of history and ask the essential question – how did we get to this point of failed legislation and what is required to really develop the people and this part of South Africa, and by inference other rural areas. These are the types of questions that an interested outsider will want to find answered.

I found myself little interested in the author’s early prefatory essay on “The politics of production”, which appears to be about the authors' own personal negotiation of space and mutual understanding to write a collaborative history and access the archives. The biographical notes on the key players is useful but irrelevant until one has read the book (hint – place at the end of the book).

I returned to the introductory chapter (following a read of the concluding chapter) and it now engaged me in understanding what this book is about and why it is important. One has to start with a sense of geography. Where is the north-Eastern Frontier? I needed a  modern map or a grasp of where is the north east frontier, today if I tried to superimpose say a Google map or a road atlas map. History maps are only useful up to a point.

The authors explored three main lines of enquiry. Firstly, what did it mean to be a chief, who could become a chief. Secondly, they probe the elusive shaping and reshaping of power over 200 years; who held power and how was power used? The third highly topical theme is that of land restitution and restorative justice around the issues of land rights and security of tenure. Embedded in that area is the question of government support for modern agriculture. The problem is that identity politics, ethnicity and restitution mean something different in this part of the world to the big political issues in the large scale commercial farming areas.

The authors are deeply committed to the story they tell and the perceptive comment by Professor Luvuyo Wotshela of the University of Fort Hare, that the authors belong to the story but the story does not belong to them. Their task has been to draw the reader into that story too and make a fellow South Africa a little less ignorant about a part of South Africa with a fascinating history. This book is a good example of the writing of a local history to how an historian can give wider relevance and meaning to the story they tell.

This study, however, ought to inform current debate and policy making. Rural politics of the Eastern Frontier is a vexed and hugely complex subject. Rural poverty and the power to make a difference through the authority of the chief is  a topic that should not be side-lined and this book should be read by the chiefs, members of Parliament and the policy makers in the civil service.