Get this book if you collect South African maps 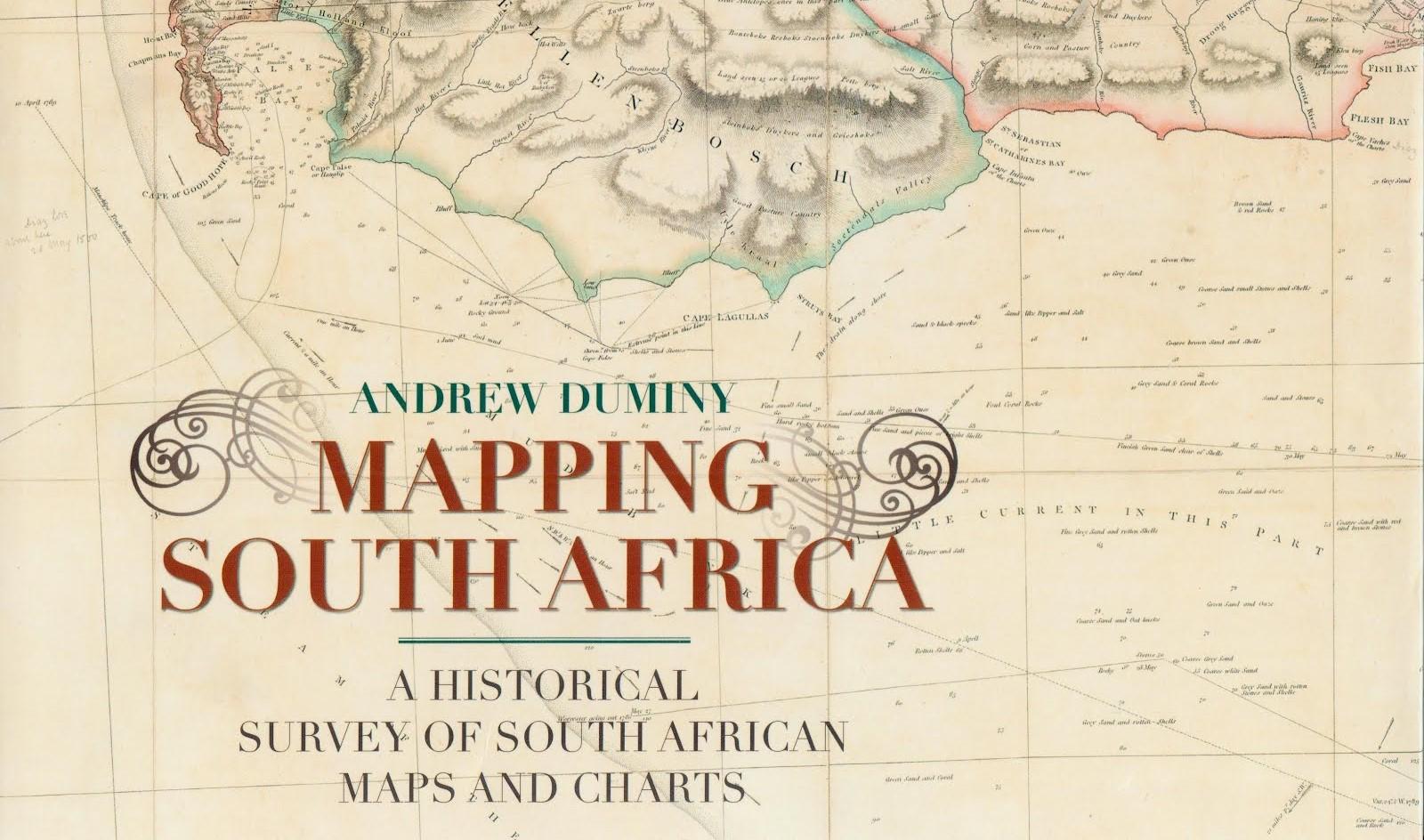 This book was published in 2011 and at the time of publication caused considerable controversy about the many claimed inaccuracies, major and minor, factual and typographical, scientific and historical, scattered throughout the book. There have been many reviews, divided into strongly favourable and equally strongly negative. Jacana, the publisher carefully collated reviews on their website and one can find these via Jacana online.

The first edition has now sold out and I believe Jacana have brought out a second edition, (apparently with some corrections and additions) but I cannot find a buying option on their website for this edition. My review sticks with the first edition. The huge plus to this book is the fact that it offers illustrations of a large number of antique maps in colour illustrations at a modest price. It becomes an accessible reference source, readily at hand on one's bookcase. Here is a vital visual guide for collectors in search of maps and signals what might be found in a narrowing marketplace.  Duminy's first map in his book is a world map held by the British museum dated 1489 drawn by Henricus Martellus and his map was the first to depict the southernmost tip of the African continent after it had been rounded by Dias. 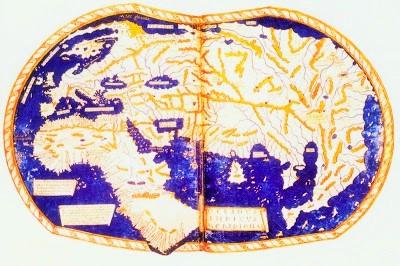 There was an ongoing exchange of information between explorers (sometimes deliberately misleading), instrument makers and cartographers.

The Guttenberg printing revolution made the printed word and illustrations available in multiple copies. Post 1500 cartographers began to produce atlases of maps and sea charts which were decorative and desirable objects for the arm chair traveller, but even more importantly for the explorer setting out from Europe on voyages of discovery, could be used for navigation. Many of the earliest maps were fanciful guesses about the geography and topography of the coastline of Africa and through the printed map we see changes in the shape of the continent. 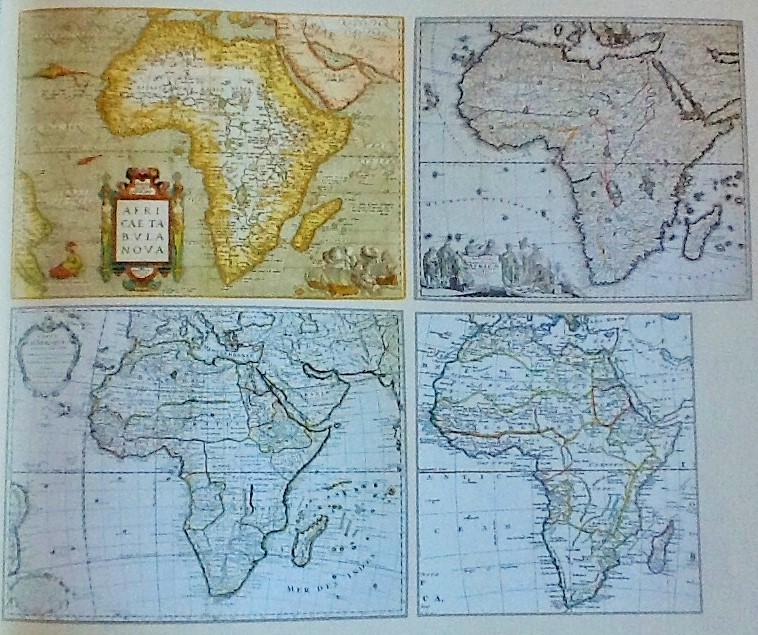 The 'Changing Shape of Africa'

Comparisons of these four maps dating from 1570 to 1787 show how the shape of Africa changed but also indicate European wide interest in Africa and how say a cartographer in England relied on earlier French mapmaking who had in turn drawn his source from a Dutch cartographer who put on paper what the explorer had reported back home.

A further point about the printing revolution is that maps were no longer unique "one -offs" but as they were produced in atlases and later in gazetteers, guide books, early encyclopaedias, dictionaries and geographic tomes, a good many early maps survive and like the earlier printed Bible are now much sought after by collectors and are closely studied. Maps are an important dimension of heritage.

An example is a map of the Cape from the German traveller Peter Kolbe who visited the Cape between 1705 and 1712 and used his imagination in filling in spaces with the names of Hottentot tribes, even though the pattern of occupation had changed and white settler farmers had created farms. So inaccuracies were compounded until fairly late and these did not only reflect the limitations of the science of mapping and measurement.

I think that maps, globes and cartography can be presented in ways which are accessible to the general reader and that writing about the science of cartography and the highly technical aspects can be left to the rarefied monographs and journals.  There is much to debate. Nonetheless, this book brings the subject to a wider readership in a most readable way.

Duminy has said that his objective was to raise interest in antique maps. It is both affordable and attractive. The author spent five years searching for maps, located in early atlases, libraries and archives around the world. As there are relatively few books on the subject (see Oscar Norwich or RV Tooley), it is a book that should be welcomed, particularly when for example the, great Norwich collection of African maps was sold to Stanford University. Fortunately, collaboration between the University of Cape Town and Stanford has made their collections available online but this does not diminish the importance of a book. Duminy is an historian, who has written with Bill Guest, on Natal History and the biography of Fitzpatrick. He also went in search of the story and subsequent biography of his ancestor, Francois Renier Duminy, and in the process became interested in maps and mapping of Southern Africa. He writes in this instance as an amateur enthusiast and regrettably his position as a former professor of history a well-known South African university was to his disadvantage, at least in the eyes of many critics. The problem with this book lies in the author making just too many scientific errors for the experts to be generous or accepting.

Perhaps the author should not have tried to give a history of the science behind the maps but rather used the maps to show how societies developed maps as historical guides and how maps were used as tools for a number of purposes through eras of conquest, for controls over assets, colonial land acquisition, land sales, farm acquisitions, military incursions and sometimes simply to find one's way.   In a recent exhibition at the Wits Arts Museum maps are allied to the markings of a society. Maps were as great a weapon as the gun or the horse or the wheel. Maps are also works of art and maps are always collectable and more accessible and affordable than even modern art works. This book gives one the opportunity to examine these many maps from so many perspectives and sets up a collectable bucket list.

The book is beautifully produced by the publishers but is an odd shape, slightly larger than A4 laid sideways. It superbly reproduces a number of maps of South Africa, with coloured illustrations, and places these maps in an historical and biographical context. I am impressed by the selection of maps and the location of portraits of the cartographers. The history of maps carries us through from decorative, gorgeous but peculiar and inaccurate world maps of the 15th century, across Portuguese exploration and then to maps covering European conquest and settlement and conflicts with black societies.

The final chapter is on the work of Henry Fourcade and Trevor Wadley in advancing mapping in the late 19th and 20th century. Global Positioning Systems (GPS) which I now use when I travel across remote mountain goat tracks in Turkey or over rock strewn mountain passes in Montenegro is given a quick paragraph on the final page. We owe a lot of map makers, explorers, road-makers, engineers who carried measuring instruments and celebrate the cartographers and publishers of maps. The story was about expanding knowledge where Africa continued, ridiculously to be considered "darkest", really because of a lack of sound cartographic knowledge.

Maps are a fascinating subject. This book is a coffee table book for the interested reader, and the text perhaps fills 20 per cent of the total pages. 40 of the 126 pages solely show historical maps, in addition to almost every other page showing a map or two or three. The historical commentary is very general and one is not looking for an authoritative history of 700 years in a few pages. The quality of the map scans is excellent, but the small size of the page means one needs a magnifying glass to pick up details. I am keener to study the maps. Unfortunately, there are no footnotes showing the sources of information or archives consulted. This is a major omission. The bibliography comes in a section called Further Reading and it would appear that these sources have been used to write the 12 chapters. It is difficult to discern the balance between archival research and reliance on secondary sources.  An addendum of the chronological list of maps, dates and their cartographers would have added to the reference value of the book.

I recommend this book if you are keen on African maps and the history of cartography. Get this book if you collect South African maps.  It is a natural sequential addition to Tooley and Norwich and all sources listed in the further reading guide. It also led me to wish to locate and read the works specifically by Professor Elri Liebenberg who is an historical cartographic specialist. I believe she has recently published a book and Duminy pays tribute to her earlier work.

Every effort of scholarship and endeavour is to be welcomed.  Research and writing leads to more questions, criticisms, challenges and queries and so encourages others to rise to the occasion and to expand and renew the circle of research. There is one unfortunate claim on the fly leaf of the dust wrapper to the effect that "this book will long remain a standard work of its kind", perhaps it's is that comment that upset the critics as they worked towards their own "standard work". One book can be overtaken as the authoritative work within months. As the reader and collector of maps and books about cartography,  let's welcome all books in the field.