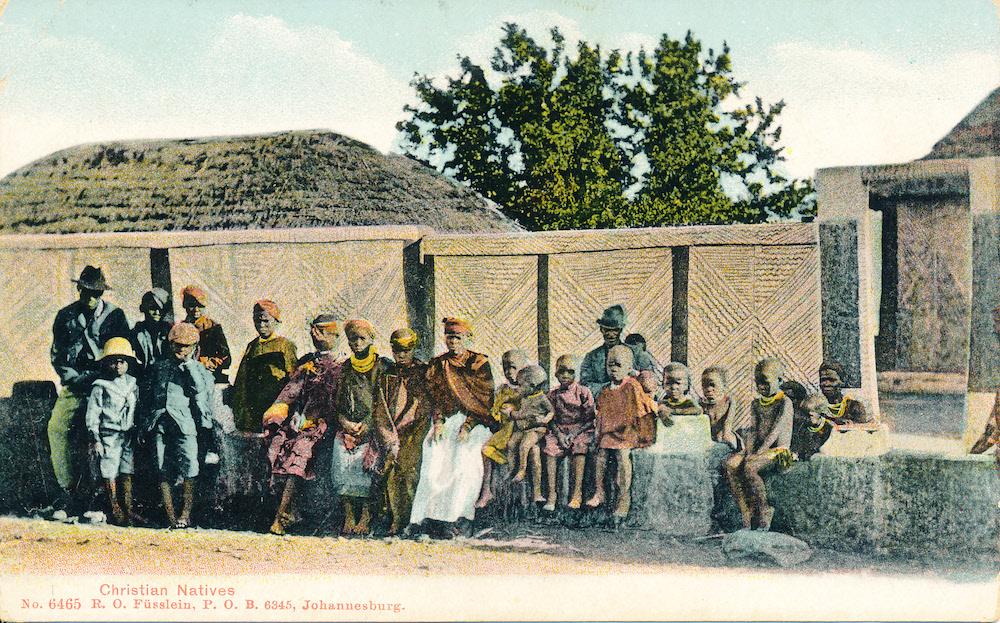 The postcard above was sent on 12 November 1914 and depicts what the card claims to be "Christian Natives". This is the part that requires some interpretation. The postcard was dated to 1914, but the photograph itself may have been taken ten, or even twenty years earlier. By the law of averages it can be dated to 1903-1914, when the use of privately produced postcards was first made legal by the Post Office. This is confirmed by the card's back which is divided down the centre, something that was made mandatory after 1907. 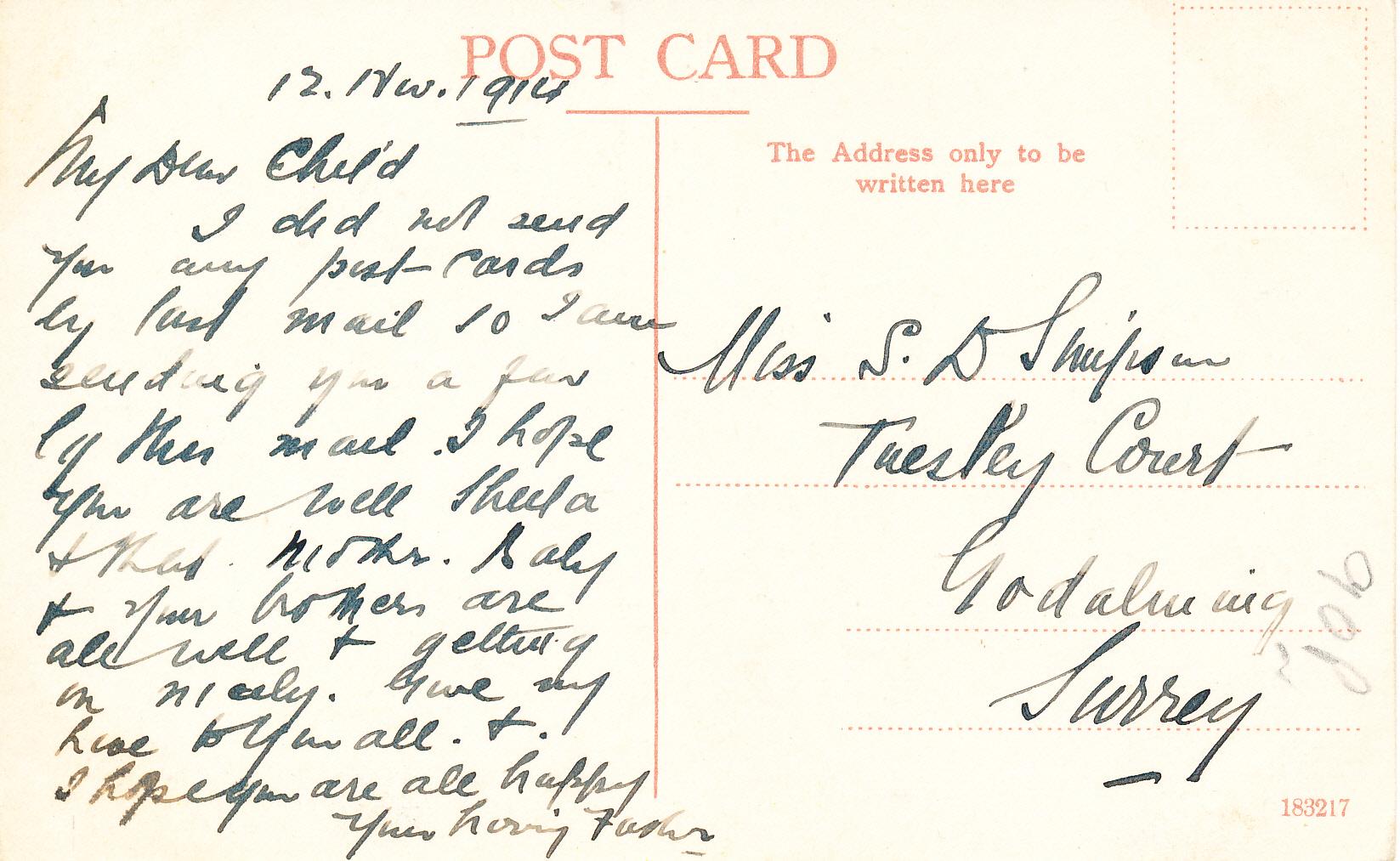 The back of the postcard

The man, seated on the far left, probably the pater familias of the group, is obviously a polygamist, and probably has four or five wives as well as about fourteen children. A second adult man and perhaps an adult woman are located on the left and far left of the picture respectively. The father's number of wives and his western-style clothes indicate that he was of high social standing, but was probably only a nominal "Christian" in his spiritual beliefs. The wall in the background has been decorated by a method of incribing the wet wall plaster commonly used by Pedi, South Ndebele and Tswana women to decorate their homestead walls. The walls are unusually high, but the seat upon which the group is seated is indicative of an Ndebele origin. Ditto for the entrance. The second woman seated from the left is also wearing a beaded skirt apron used by South Ndebele married women, but this could have been used by other groups. The beaded leather apron used by Ndebele married women, is of a later vintage.

The dwelling behind the wall has been the result of obvious immigrant European influence as it uses a hipped roof structure, which was never developed by South African indigenous society. In addition it has been thatched in what became known in the former Transvaal as the "boer" method of thatching. All of these are indicative of obvious Sotho/Tswana origins, but most particularly South Ndebele as all were recorded in the 1970s and 1980s at KwaMsiza, north of Pretoria, and a number of locations in what became known to the Pretoria Regime as KwaNdebele.

If this is a Ndebele group, then this is probably the earliest record of Ndebele wall decoration I have discovered to date, and precedes those photographed by Duggan Cronin by at least a generation. I have enlarged some of the areas of the picture that I consider important clues in the recognition of the residents. 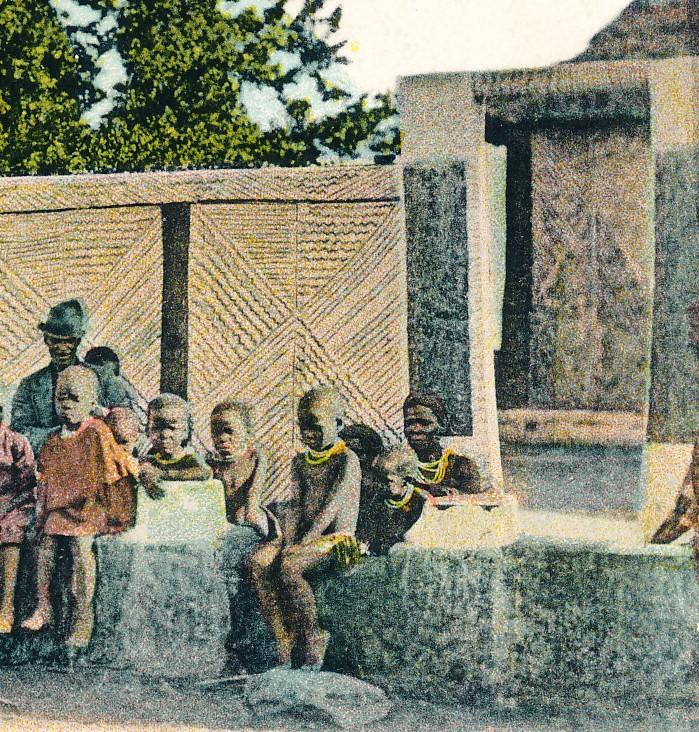 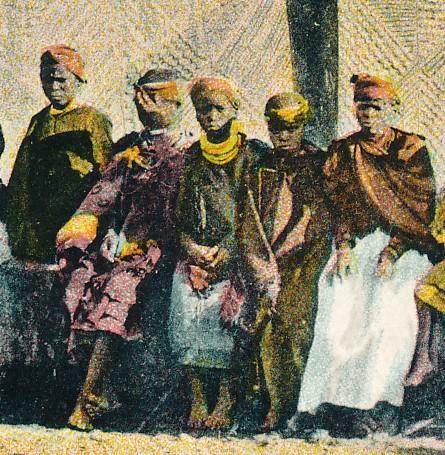 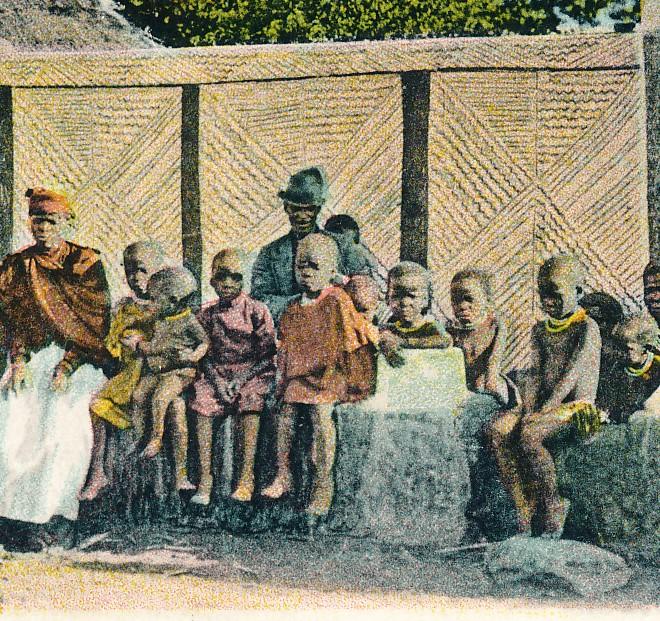 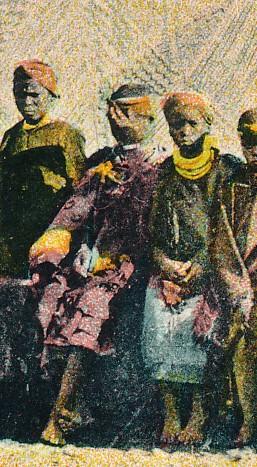 I would be grateful if any subscribers of The Heritage Portal who may have an opinion on the matter could cast a critical eye over the photograph and make their opinions known for the sake of public debate.