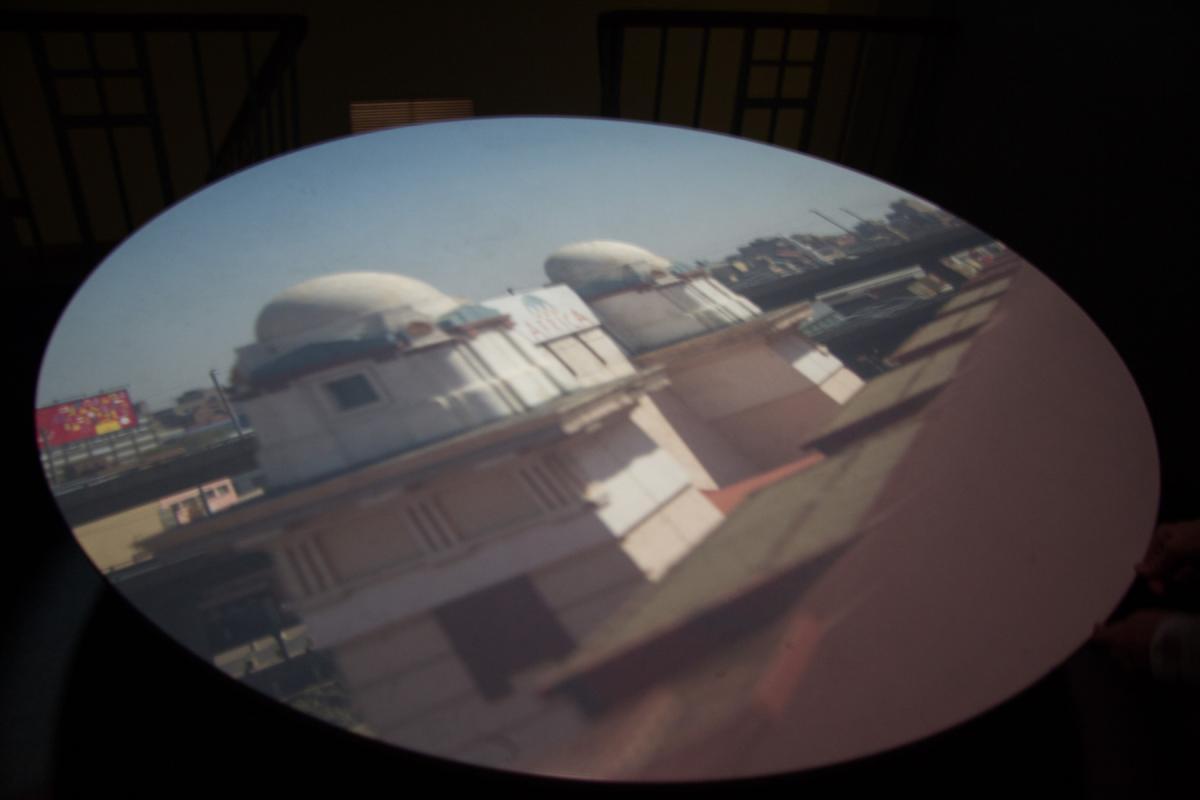 In the article below, journalist Lucille Davie describes one of Joburg's hidden gems, the camera obscura at Museum Africa. She also delves into the significance of the Bensusan Collection held by the museum. The piece was first published on the City of Joburg's website on the 14 February 2006. Click here to view more of Davie's work.

Did you know that there’s a periscope on the top of the Museum Africa building, looking down on the goings-on of Newtown?

Well, actually, it’s a camera obscura which operates much like a periscope. It gives the viewer a 360º view of what’s happening outside the building. It was built on the top floor of the Bensusan Museum of Photography in around 2001, as a Blue IQ project, costing roughly R200 000. It was custom built for the museum – there are only five others in the country.

Inside the building the image is projected on to a large round table, and a metre or so above the table is a ring that moves, moving the mechanism that holds the mirror on the roof. As the ring moves so does the image on the table. 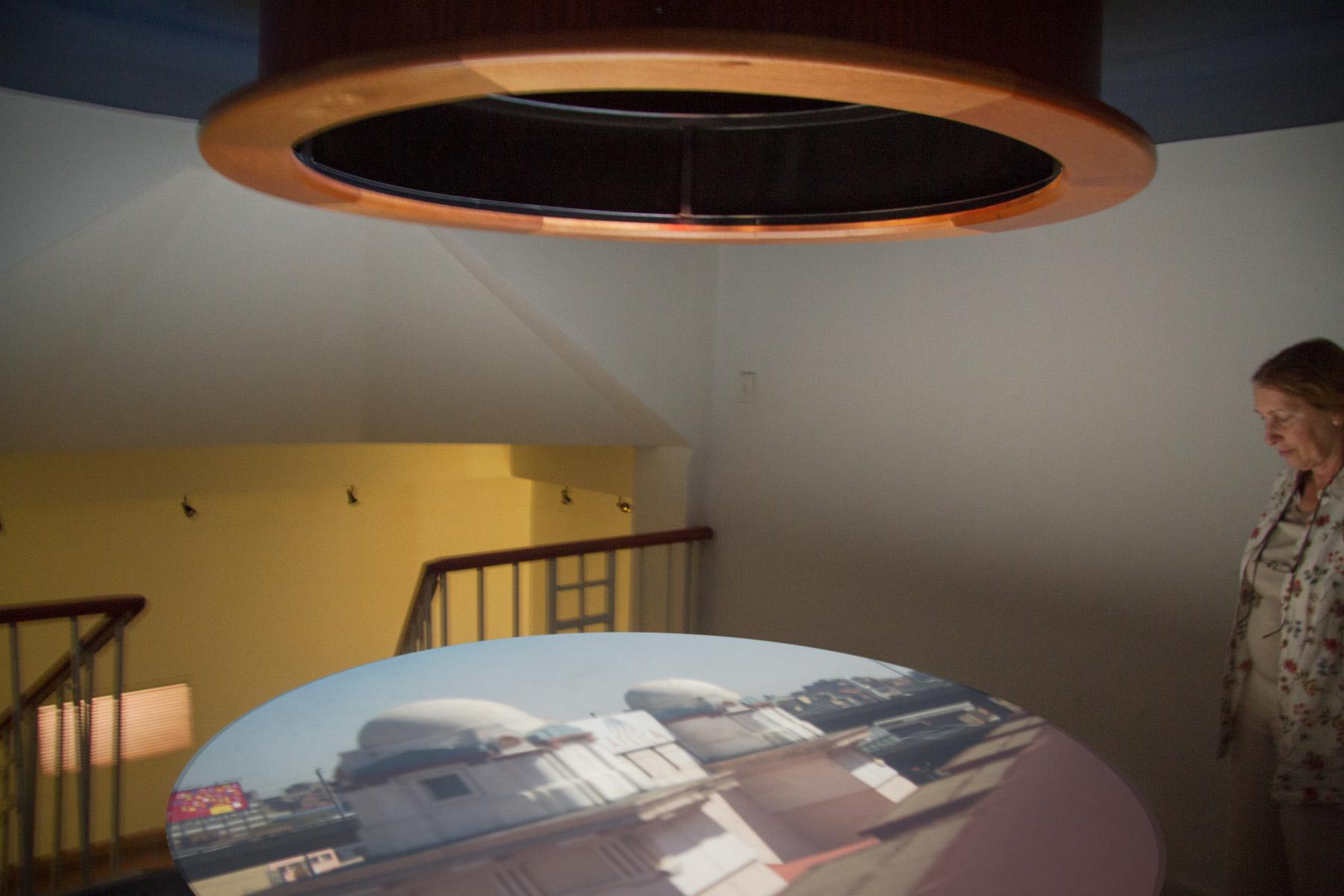 These periscope mechanisms were first recorded in Chinese writings from around 500BC, says Jonathan Frost, curator of the museum, housed on the top floor of Museum Africa in Newtown.

The museum has one of the world’s best collections of photographic records and documents, and of course, cameras. 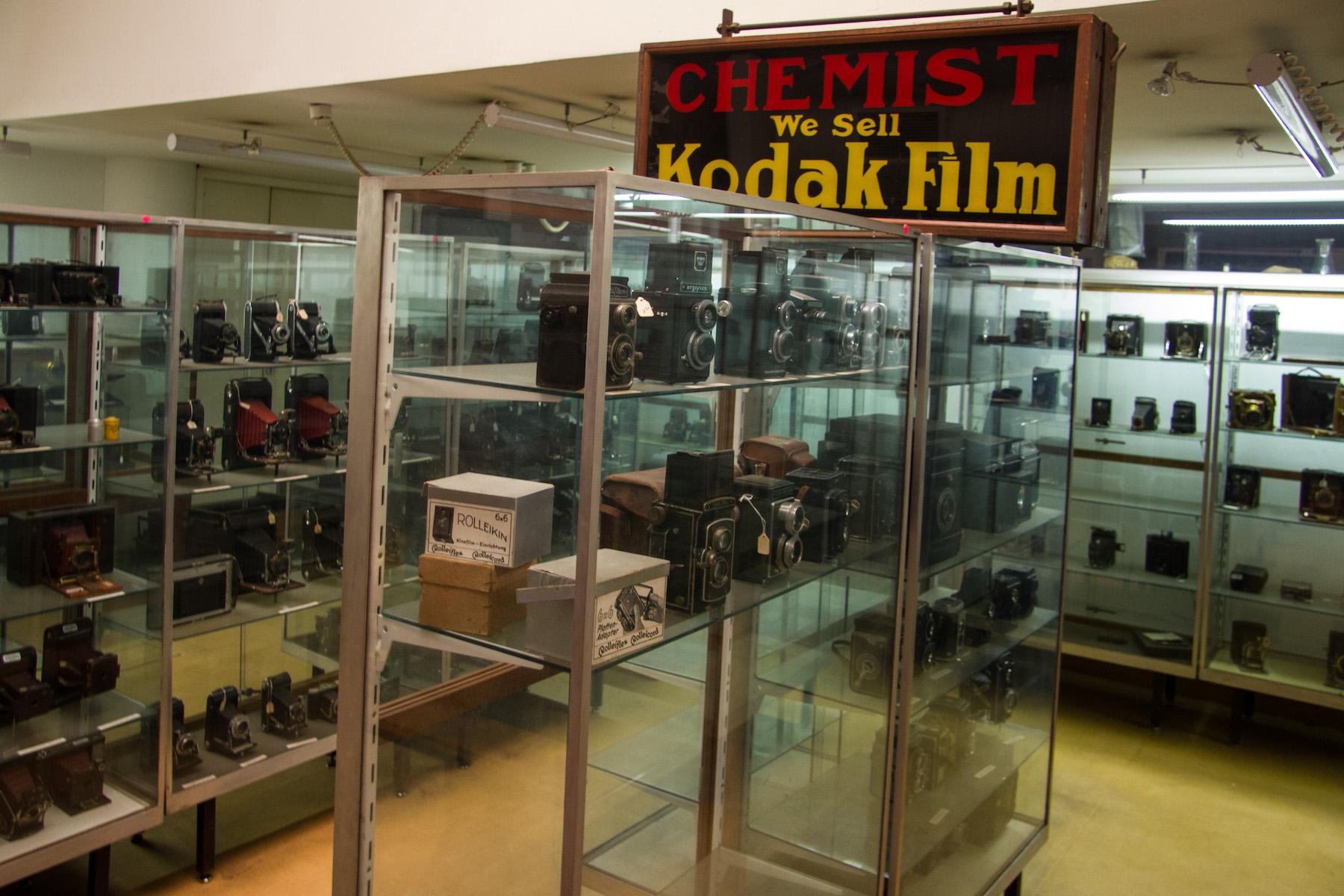 A portion of the Bensusan Collection (Mark Straw)

It was begun with a donation of amateur photographer and sometime mayor of the city, Dr Arthur Bensusan, in 1968. He donated his entire 30-year collection: 400 antique cameras, 5 000 photographs and 2 000 photographic books, some of which date back to 1860. 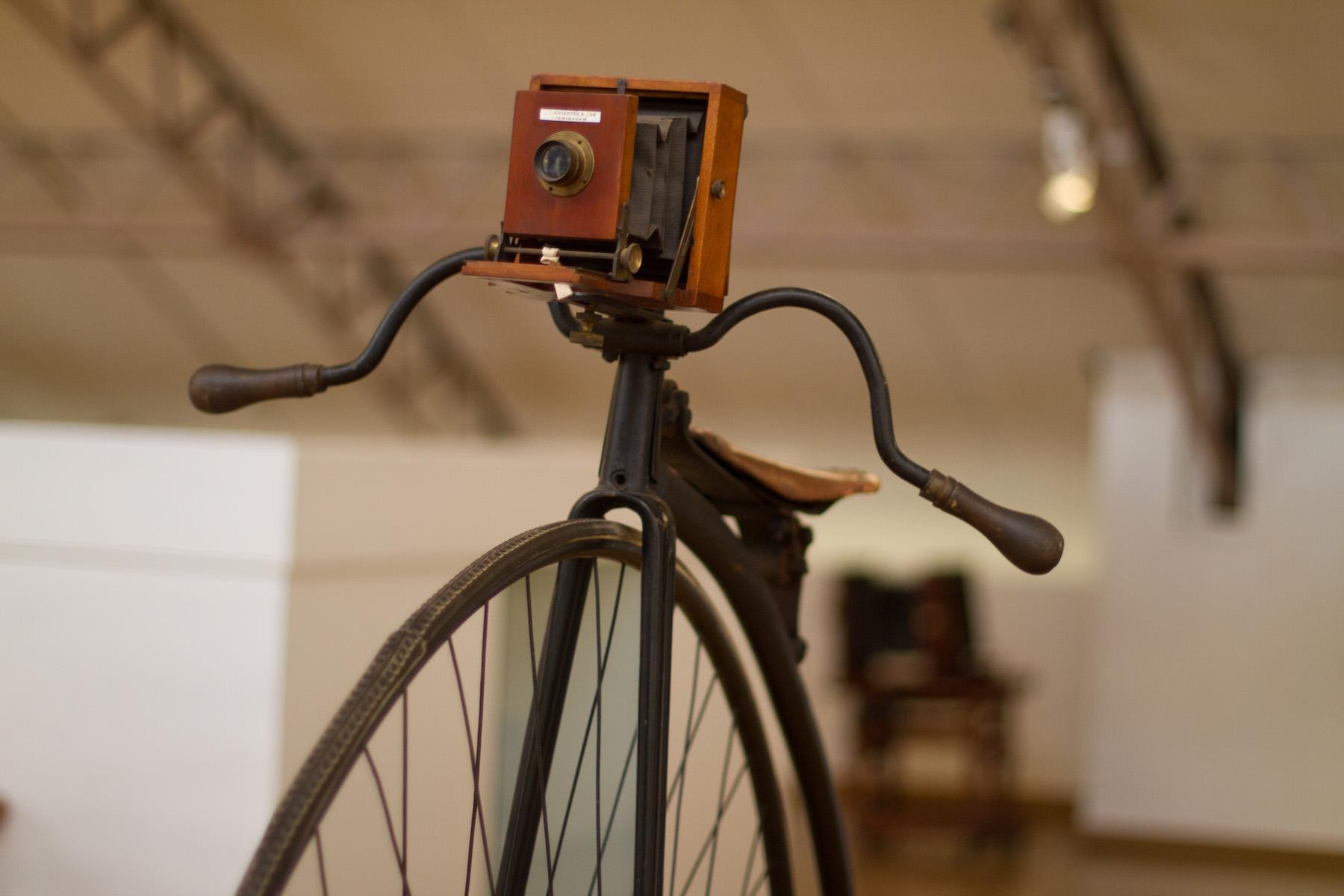 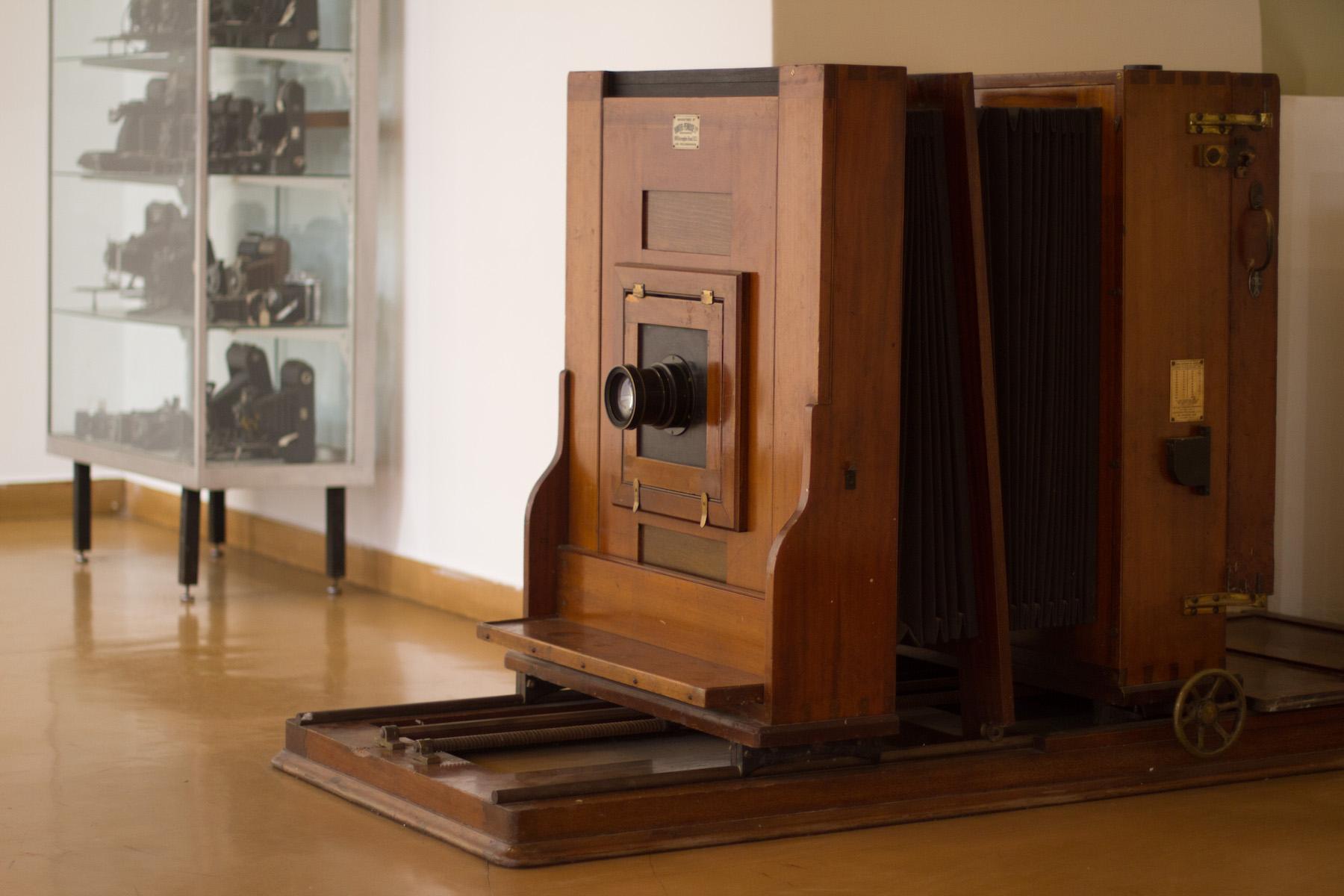 Two of the cameras in the historic collection (Mark Straw)

Bensusan told the Rand Daily Mail of November 1968: “The museum will illustrate the history of photography and the history of South Africa as seen through the eye of the camera.”

A reasonable number of these cameras are on display at the museum, making for a fascinating study.

Part of Bensusan’s original collection is a camera belonging to Winston Churchill, and perhaps the first official war photograph – one taken of a Crimean War scene taken in 1854. Also in the collection are several spy cameras from the 1800s, made to look like watches, books and binoculars.

Besides collecting photography books, the museum continues to collect cuttings, pamphlets and journals, and has made some valuable additions to its wonderful collection. 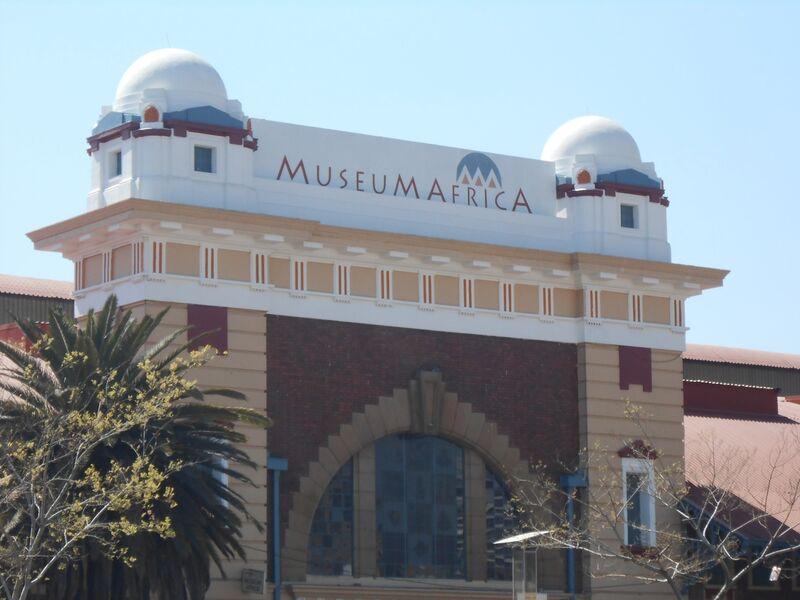 The most special of these is the acquisition in 1970 of the first negative ever made. It was taken by the inventor of photography, William Fox Talbot, in 1835, with the help of a camera obscura.

The negative, several centimetres in size, shows the oriel window of Lacock Abbey in England. The City paid R860 for the negative, according to The Star of October 1970, acquiring it from Bensusan. There are only three other such negatives in the world – two in the UK and one in Russia.

Talbot is quoted as saying: “I do not profess to have perfected an art but to have commenced one, the limits of which it is not possible at present exactly to ascertain. I only claim to have based this art on a secure foundation. It will be for a more skilled hand than mine to rear the superstructure.”

He was a respected philosopher, classicist, Egyptologist, mathematician, philologist, transcriber and translator.

Bensusan told The Star of October 1970: “I got it seven or eight years ago for £2.5s from a British dealer who did not know what it was.”

Bensusan, now 85, says he has seen two of the other four negatives. He says of the museum’s negative: “Ours is by far the crudest, the oldest and the less distinct.”

One of the displays in the museum shows a timeline of the development of cinematography.

The first pictures shown to an audience thousands of years ago were shadow puppets projected on to a wall with light. This was common in China at the time.

Then in the 1700s the magic lantern was invented. It showed paintings moved through a box with a light, usually a candle or an oil lamp, reflecting the images on to a screen. Travelling magic lantern showmen appeared in Europe in the early 1800s.

This developed to magic lantern slides, where strips of pictures were slid through the lantern, giving a sense of movement and action. By 1865 photographic transparencies, which were coloured by hand, were being developed.

By 1833 a phenakistoscope appeared, a spinning disc with 16 holes which was spun in front of a mirror. If the disc spun quickly it, it looked like the picture moved.

In 1878 the dry plate negative was created, on which a series of pictures were produced. The first movies were about to be born.

In 1895 August Louis Lumiere from France produced the first feature films. Titles included The family tea table, The railway station, The forge, Street in Paris, and Sea bathing in the Mediterranean.

By the end of 1896 the moving picture was well established as a form of entertainment but without sound which was often provided by a pianist in the cinema. In 1910 the Allefex machine was invented. This provided sound effects like a shotgun, rain and hail, waves, crashing china, a dog’s bark and a child crying.

A slow process with some innovative minds working methodically on their inventions. Today we take movies for granted.

Frost admits that the museum needs to get fully up to date, with examples of digital cameras. But as always with museums, money is the issue.