Limit State Design of Buildings and the Preservation Engineer 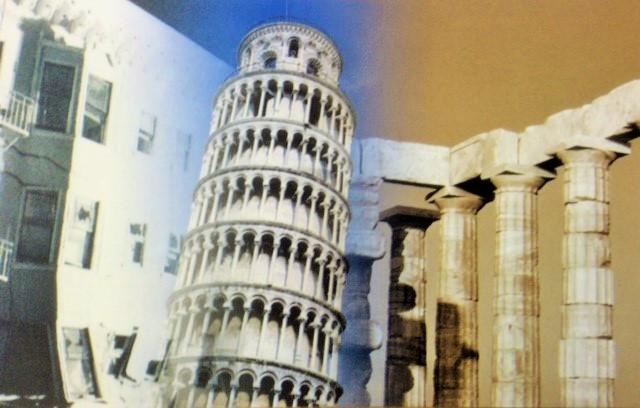 Limit State Design shares the same acronym – LSD with the psychedelic drug Lysergic (Acid) Diathylamide, the “Lucy in the Sky with Diamonds” of the Beatles, even if John and Paul denied the association. Likewise more than a few Structural Engineers that studied in the “Swinging Sixties” are in denial over the merits of LSD, a design philosophy at variance with the time honoured pre-computer age method of ASD – Allowable Stress Design.

The term Limit State merely indicates a boundary condition beyond which the whole structure or an element thereof is considered to be no longer fit for purpose. This may arise in many ways but the principal Limit States to be considered are firstly one of Ultimate Strength and secondly of Serviceability. In the former we are concerned with the maximum loading capacity of the structure (at imminent collapse) – the Ultimate Limit State. In the case of the latter we are concerned more about the appearance of the structure; not only damage to finishes and the durability of the shell but also the detrimental effects on occupants should large deflections or deformations take place. These definitions are those of the structural engineer, whereas an owner or a developer may have his own views and it may well be acceptable for a building to have reached its “Limit” and be ready for redevelopment long before its structural fabric has deteriorated; as was often the case in the Johannesburg CBD when buildings were torn down after only a few years of occupation and taller buildings built on the same site. 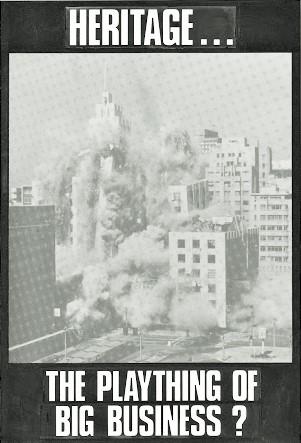 A good example of a limit state being reached is that of the Leaning Tower of Pisa in Italy. The construction of the tower began in 1173 AD, but its completion was interrupted several times by wars, lack of funds and also whilst master masons worked on ways to correct the lean. Without these delays which allowed the ground under the tower (highly compressible clay) to gradually compress, it is certain that the tower would have toppled over. In point of fact it started to lean when the builders had reached only the third storey in 1178. The original purpose for building the tower was as a campanile (bell tower) free-standing from the cathedral and its eventual completion, to a height of 60 metres, was to be in 1370  (nearly 200 years later) and ever since it has been “falling” at a rate of two millimetres per annum and today it is 5 metres off plumb. It has passed the acknowledged Limit State of Serviceability of the original scope of work although doubtless it has been of adequate service in the cause of science and tourism! Collapse has not occurred, thus the Ultimate Limit State has yet to be reached and with the aid of modern methods of stabilisation it is hoped it never will.

Soil under the Leaning Tower of Pisa - Why Buildings Fall Down by Levy and Salvadori.jpg 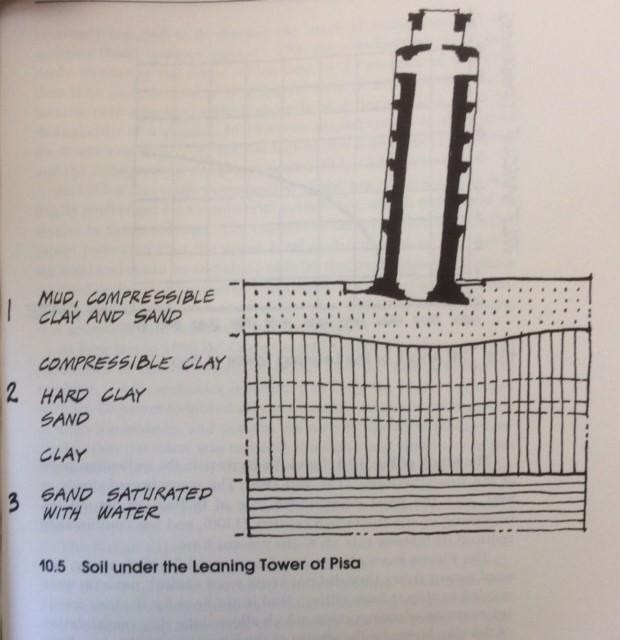 Source - Why Buildings Fall Down (ref. 4)

Of course buildings are not intentionally designed to collapse and safeguards are put into place during the design process to make sure that there is a low probability of such an occurrence ever happening. This is done in LSD by applying partial safety factors to the actions (loads) which are greater than unity (i.e.  for ULS, 1.2 x dead load, 1.6 x live load and 1.3 x wind load) and a resistance factor, less than unity, to the yield stress of a material of construction (i.e. 0.9 for steel). “Take it to the Limit – A brief description of Limit States design philosophy for the design of steel structures” from the Steel Construction magazine (ref. 5) gives a good introduction to the topic.
It is worth mentioning that the partial safety and resistance factors were calibrated for LSD so as to give the same results as those found by the previous ASD method; the new method had to produce the same structural economy. In time it may be possible to reduce these factors (on statistical grounds) in order to obtain more economical structures without a consequent risk to safety.

The beginnings of Limit State Design came about in research work done by Khotsialov and Streletsky into reliability theory and the probabilistic nature of safety factors. Their work was carried out in Stalin’s Russia prior to the Second World War and their ideas were developed thereafter by Gol’denblat, et al, which led to the introduction, on the 1st January 1955, of the first edition of the USSR’s “Construction Standards and Regulations (SNiP) – the first limit state design code to be issued.

South Africa has, in the past, followed Britain’s lead in matters of structural design codes and in 1972 our engineering fraternity were introduced to the British Standards Institution’s (BSI) first limit state code – “CP 110 The structural use of concrete”, which was intended to replace CP 114, its allowable stress predecessor. CP 110 was taken on board and formed the basis of SABS 0100 (now SANS 10100)

Britain, after considering the concerns of industry, decided in the intervening period from 1972 to 2010 to allow its practicing engineers the choice of using either the allowable stress or the limit state method. This arrangement has now come to an end and ever since 1st April 2010 (no joke) the Limit State “Eurocodes” have become Britain’s official standards for structural design (ref. 14).

As one “old school” engineer lamented in a Limerick:

A young engineer who lauded Limit State,
Rejoiced in Allowable Stress being out of date,
Its application however,
Was a greater endeavour,
And he wished he’d never tempted his fate.

South Africa diverged from the British course when updating its structural design codes in the 1980’s finding suitable codes where it could. For instance our steel code is borrowed from the Canadian CSA S16.1 Now with the advent of the suite of Eurocodes, the decision makers are reviewing whether or not to go that way and implement the Eurocodes wholesale with a National Annexe appended. This will be a vexation to be faced by the next generation of engineers still in their varsity years.

At present the South African Standard SANS 10400-B: 2012 Edition 3 (formerly SABS 0400) - The application of the National Building Regulations, Part B: Structural Design gives clauses (deemed-to-satisfy rules) to qualify what structural codes are to be used by competent professionals i.e Professional Engineers and Professional Technologists. The four most important structural material codes are for concrete (SANS 10100), steel (SANS 10162), timber (SANS 10163) and masonry (SANS 10164). Added to those is the Loading Code (SANS 10160 Parts 1 to 8 incl. “Basis of structural design and actions for buildings and industrial structures” which was strongly influenced by Eurocodes EN 1990 and EN 1991. Within Part 1: Basis of structural design is Section 5  “Principles of limit states design”  which gives clauses that  define the Limit States to be dealt with in carrying out the process of structural design. Chapter and verse does not need to be expounded, suffice to say that the two Limit States recognised as Ultimate (clause 5.3) and Serviceability (clause 5.4) are given a thorough account for those tasked with the detailed design.

The present built environment of South Africa’s cities has been put in place during the last 350 years, since the coming of European settlers to the Cape. Initially in Cape Colony by using the traditional building materials of thatch, timber, brick, stone and lime mortar. However in the last 120 years (since 1896) our buildings have increasingly used the modern methods of utilising structural steelwork and reinforced concrete and these have taken precedence for the building of large projects and have evolved to such sophistication and complexity that standards for their safe use had to be established.

At the turn of the 19th into the 20th century moves were made in Britain and elsewhere to provide mandatory regulations in the form of by-laws for the public safety by which the practicing structural engineer had to abide by.  A milestone was the 1909 London County Council (General Powers) Act, the so called “Steel Frame Act”, which owed a lot to Harry Selfridge and his engineer Sven Bylander, as they brought Chicago building techniques to London when constructing the Selfridge’s department store in Oxford Street. The LCC Act (1909) thereafter became the model building by-laws for several of the provincial cities in England as well as many of the cities of the British Empire. These early by-laws eventually developed into standards and codes of practice that were based on elastic theory and allowable stresses and they evolved and prevailed to the end of 20th Century; BS 449 (steel) and CP 114 (concrete) are now gone but not forgotten.

Forgive me for mentioning an outmoded way of design but it must be appreciated that when doing a strength check of a heritage building (i.e. a building older than sixty years) by the rules of Limit State, it may well be that the results that a computer spews out will prove that the building is in danger of collapse and needs to be demolished (and thus lost forever) or that it needs expensive remedial work done to it; thus the building may not meet modern day code requirements but it still stands and operates well (ref. 19).  Structural engineers, when assessing an existing building, must be aware of the original design parameters and methods of construction used when the building was first constructed.  Notably this is not taught at our universities and technikons and is only learnt by experience and reference to older texts. Therefore there is a dearth of structural engineers who are expert in preservation engineering (ref. No.20).

With sustainability being introduced into our Building Regs and “green” becoming the byword, the renovation and re-use of existing buildings will become more and more the norm in our cities and thus a regular part of the structural engineer’s brief. He or she will need to know the old ways of design, as they are so vital to the understanding, evaluation and conservation of our stock of heritage buildings; only then will they be able to call themselves Preservation Engineers.

In conclusion I shall quote verbatim the Synopsis from the paper “Let the building speak to you” (ref. 21): “Refurbishment needs knowledge of the craft of construction, history of materials and of investigative appraisal for success. It requires different techniques from the design of new structures. Conservation and refurbishment for extended use is an essential component of sustainable development since rejuvenation of existing building stock brings new extended socio-economic use without incurring substantial additional embodied energy. Successful refurbishment is the result of understanding how a building really works and normally requires re-engineering of the internal environment. Sound appraisal needs a safe and healthy investigation and expert knowledge management”. Amen.