Kloosterskool (cloister school) is not the proper name, it is more a nickname given to the building by some people in Kroonstad. It refers to the convent school run by the Sisters of Notre Dame. I will come to the details on how, why and when in this article.

To the east of Kroonstad, just outside of town in an area called Jordania is a school complex. This is a school operated by the Sisters of Notre Dames de Namur, short SND.

The beginning of the school goes back to the early 20th century, when Bishop Gaughren sent a letter to Sister Anne Editha of the SND in Liverpool inviting them to come and set up a school in Kroonstad. At the time he was the catholic bishop in Bloemfontein, with his diocese being the whole of the Free State. At that time some of the Sisters were already active in Rhodesia and the Congo. They responded positively and five sisters were sent out to Kroonstad and two for the station, Empandeni, in Rhodesia. The five for Kroonstad were: Sisters Louise of St Francis, Joseph of the Holy Cross, Therese of the Presentation, Anna of St Gregory and Anne Editha, the last one being the mother superior of the small group.

Just to digress slightly into the history of the institute (sometimes also referred to as a congregation or an order) of the Sisters of Notre Dame. The congregation was started by Julie Billiart (1751-1816) in 1804 in Amiens in France. It was a congregation of like minded sisters with the aim of helping the poor children by providing them with an education. Later the order moved to Namur, this is where the full title SND de Namur comes from. The organisation carried on and grew after Julie's death and by the middle of the 19th century started going international. Julie's work was recognised by the church, she was beatified in 1904 and canonised (made a saint) in 1969.

On their arrival in Kroonstad on 23 January 1907, they immediately went to work and the first day school opened two weeks later.

The Sisters were also asked to help with a school for the children of the railway workers. This school was established near the station. A problem with it was that the rail workers moved from place to place, wherever the work was thus the children never stayed in the school for long. This school was discontinued after less than a year and the scholars transferred to the day school in Brand street.

Another project was to start a school in the location for black children. This was going to be the Saint Peter Claver School (it commenced in 1916).

And then there was the project of building a big school. Sister Anne Editha set off immediately to find a piece of ground where they could erect a school building. She was going to have the school outside the municipal boundaries in order to save on property tax. The site of 30 acres she found was just outside on the banks of the Valsch River. It was acquired from Mr. C. Castignani for a consideration of £1500.

The foundation stone was laid by the Lieutenant Governor of the Orange River Colony Sir Hamilton Goold-Adams and blessed by Bishop Gaughren. I love the ladies fashion, especially the hats in the picture below. The architect was JF Beardwood and the building contractor RJE Kroekel, a German from Pretoria; he had quoted £15 000. There were some deficiencies with the construction which led to the Clerk of Works being dismissed and a new one appointed.

Bishop Gaughren at the foundation stone laying in 1907 - archives of the SND.jpg 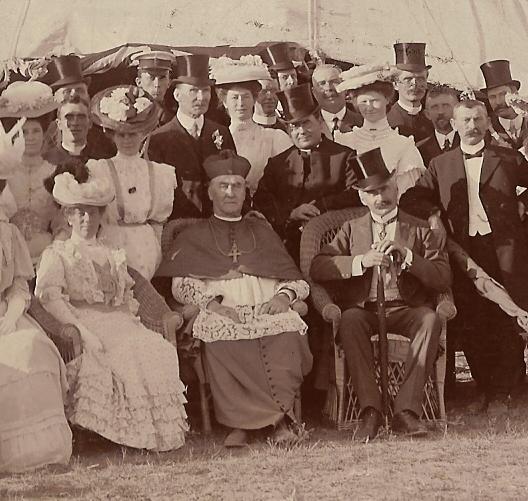 Bishop M. Gaughren at the laying of the foundation stone in 1907 (archieves of the SND)

It was coming up to the official opening on the 13 June 1908 when in the middle of the night the Sisters were awakened to be informed that the new convent was on fire. There was nothing that could be saved.

The scene after the fire in 1908 - Kroonstad Centenary.jpg 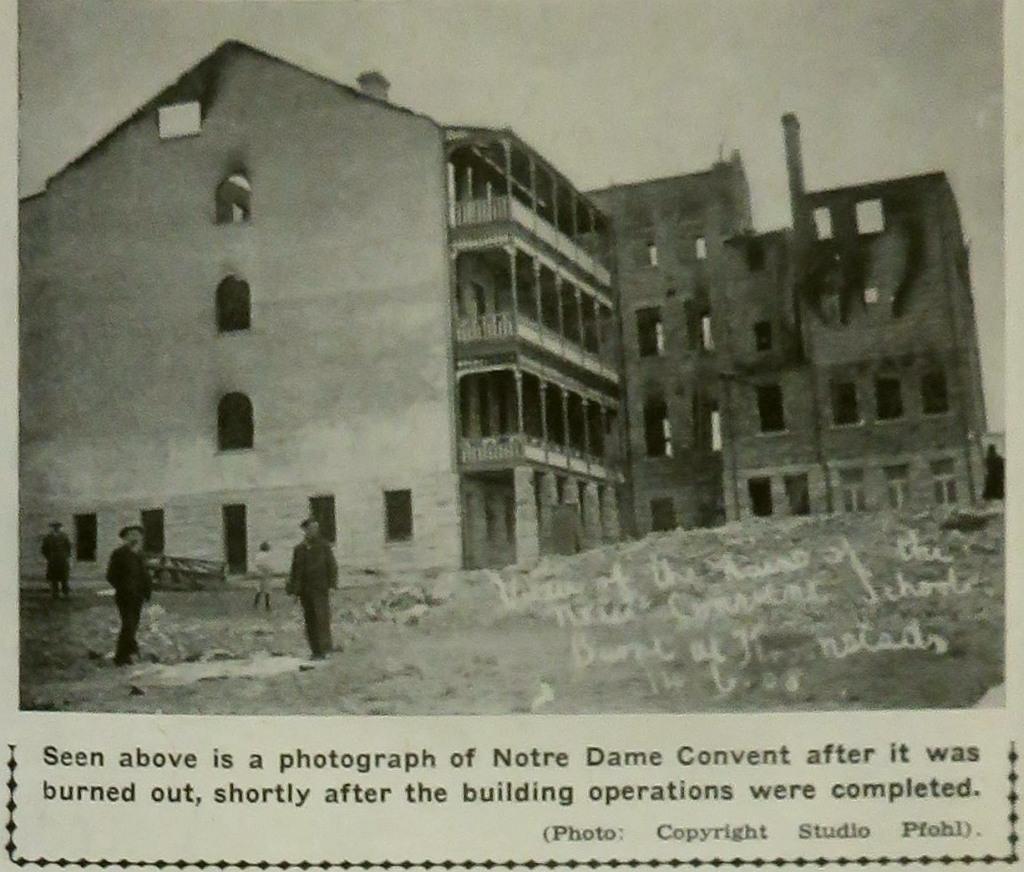 The scene after the fire in 1908 (Kroonstad centenary)

The cause of the fire was never established. Detectives sent from Bloemfontein could not come to any conclusions. There were rumours that it was arson caused by a pay dispute with the workmen. Following this there was a long negotiation with the insurance company which eventually paid out £10 317 plus 1500 for salvage. That was not enough to re-erect the building. Head office in Namur was initially very sceptical about replacing the building, but eventually agreed but with the proviso that the cost of the new building was not more than the original contract of £15 000. One other instruction was that the construction had to be of fireproof material, stone, cement and concrete rather than wood.

After all that had been settled Mr Kroekel went to work again and erected the three storey building shown in the picture. It was officially opened on the 16 December 1908. 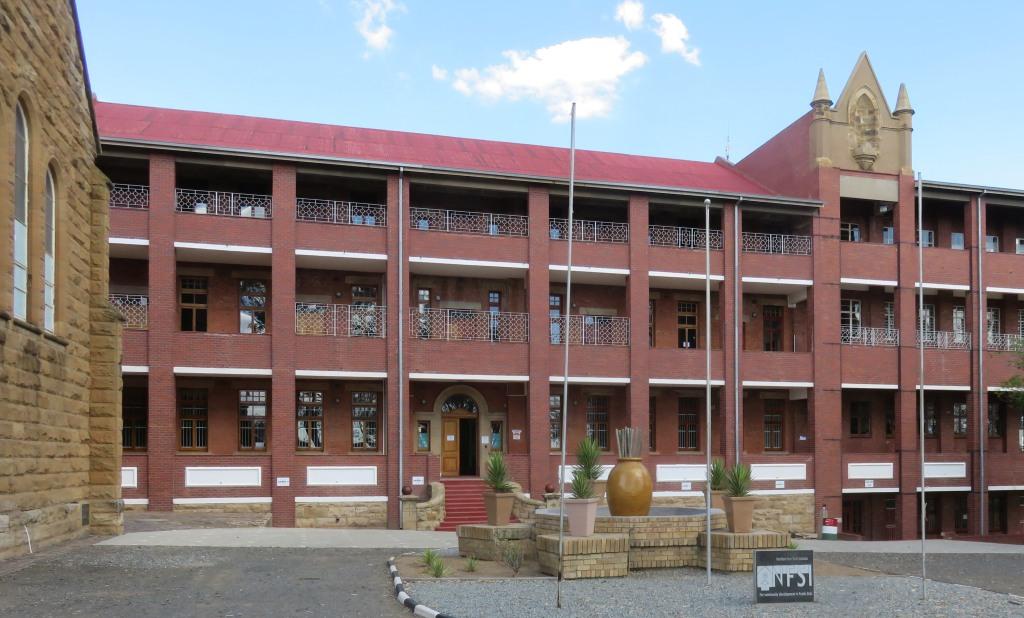 The school started in 1909. There is a report that it had 30 pupils in 1910, most of them in boarding coming from the surrounding farms. There was also an intake from the local community. It has to be mentioned, the school on the hill, as it was called at times, was a school for girls only.

Over the years more structures got added. 1922 was the extension to the east, referred to as the east wing, architecturally the most pleasing of the additions. In 1933 the chapel was built as a side wing to the north. It is still in use, not only for religious services, but also for school meetings. The swimming pool was put in the same year. Later in 1950, a wing for accommodating borders was completed to the west. 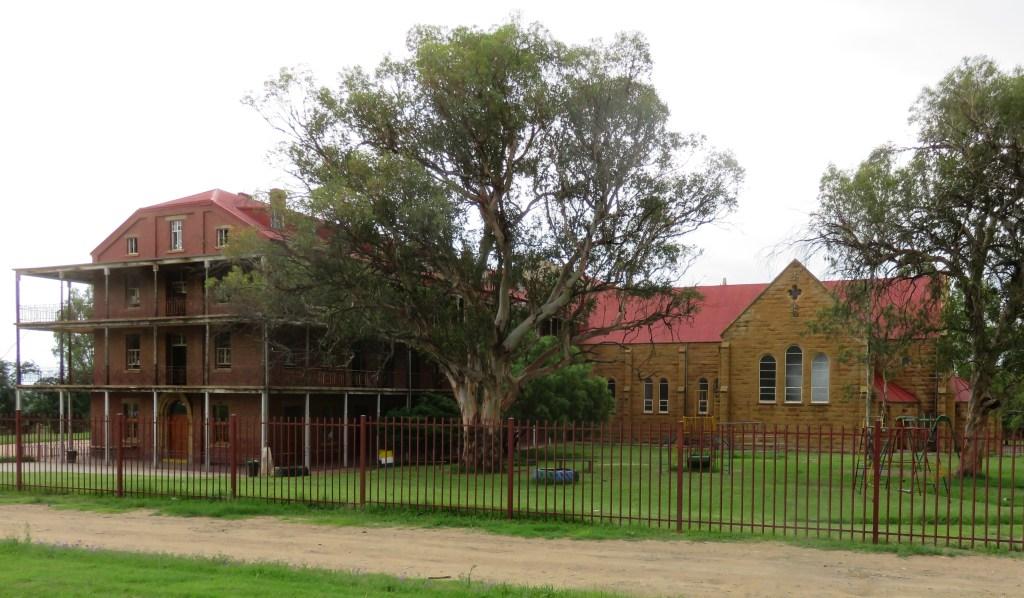 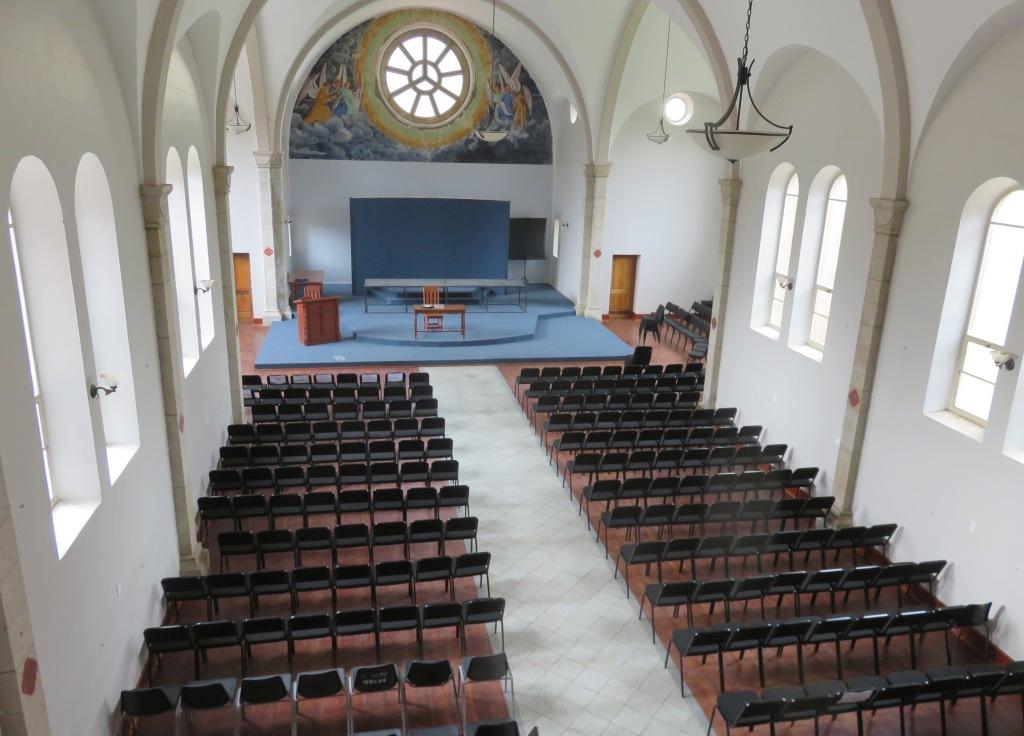 Inside the chapel (Horst Müller)

Over time the school expanded the curriculum and the number of pupils increased. In 1962 it was reported that there were 321 pupils. It also grew in stature, attracting boarders not only from the surrounding areas, but also the Cape and adjoining territories, Bechuanaland (Botswana), South West Africa (Namibia), Rhodesia (Zimbabwe and Zambia) and Mozambique.

One of the significant events in the 50s according to information from the Sisters, there was a visit by Archbishop Denis Hurley, he was well known for his resistance to the apartheid system.

Archbishop Hurley visit came for a visit in the 1950s - Archives of the SND.jpg 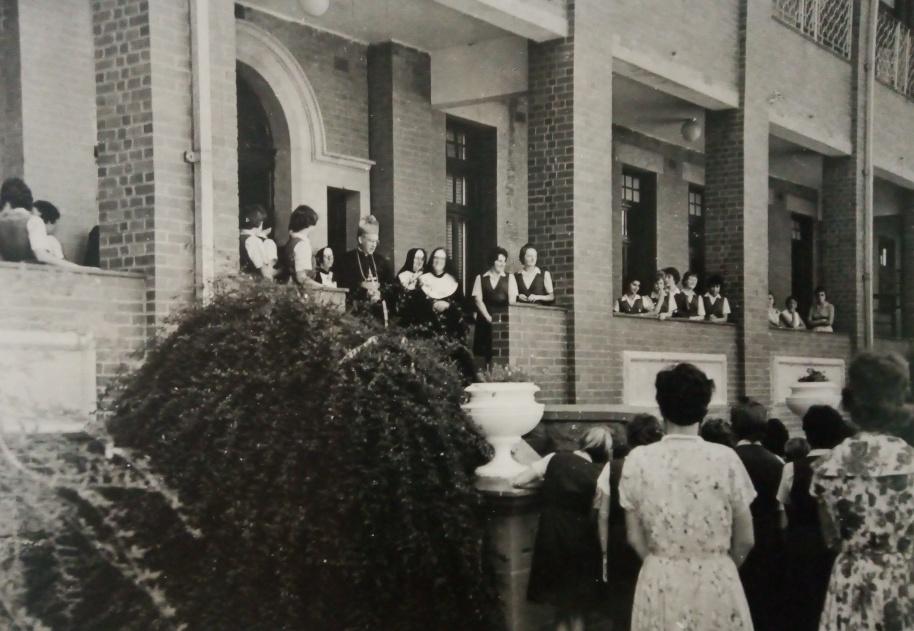 A disastrous fire struck the boarding wing on the 30 July 1967. The cause of it could not be established and to add to it a second fire broke out a few days later on 2 August, this time affecting the old building. The cause of the second fire was due to a short circuit caused by water ingress that occurred when fighting the first fire.

The end of the school came in 1972. What led to this? As a consequence of the 2nd Vatican council of 1961 to 65 and the call by Pope John XXIII for a  renewal of the church started the Sisters to re-look at their work in South Africa. Mainly going back to the principles on which the SND were founded, which was to help the poor. To help with the evaluation Sister Marie Augusta from the Emmanuel College in Boston USA came to South Africa in 1970 to make a study of the education facilities of the Sisters. She found that a disproportionate effort was expended on the 'white schools' and that these schools were suffering from reduced scholar intake. Thus with a heavy heart, but knowing that it was the right thing to do, it was decided to close the convent school in Kroonstad, and in Westonarea, so that they could be more effective in the black schools.

The buildings were sold to the Free State administration for R324 000. A technical high school, run by the education department, came into its place. This school did not last many years and the defence force took over, to use the buildings for technical training. And when that came to an end the property was left to the elements and the vandals. In 1999 the complex was offered back to the SND at no cost. The Sisters had to think hard before accepting the offer. They were a bit reticent because of the cost involved to renovate and fix the place. But with the help from the alumni, some of the businesses in town, other organisations and individual donors they took on the challenge.

Instead of starting a new school they moved the existing Saint Peter Claver school from the township to here. The situation at the end of 2020 is that the school is fully functional. It caters for male and female from grade R (pre-school) to 12. It is classified as a private school, school fees have to be paid. It is an IEB school and the pass rate 98%. At the same time renovation is still ongoing.

Aerial photo of the Kloosterskool Kroonstad (archives of the SND).jpg

Aerial photo (archives of the SND)

The above picture summarises the layout of the complex. On the left is the east wing, the chapel is the cruziform building towards the viewer, to the left of the east wing in the central part of the original school building and to the right of it the west wing that was added in 1950.

A thank you goes to Sisters Marie McLoughlin and Biddy Rose Tiernan of the Sisters of Notre Dame de Namur, who were very helpful, supplying information and correcting some of my misconceptions.