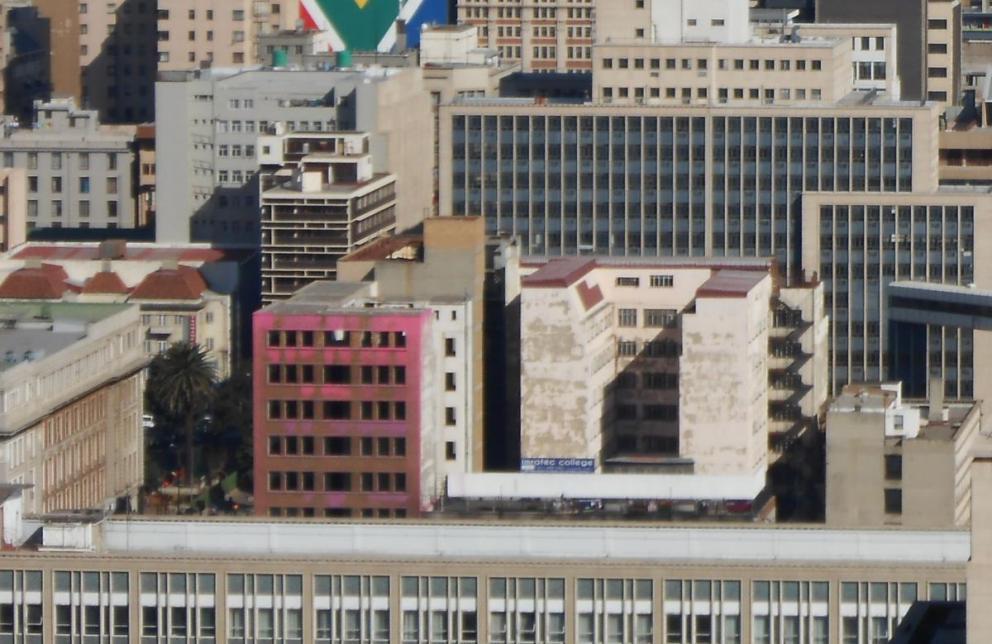 “Briefly, artists (who originally remained anonymous) decided to paint various buildings pink as a way of highlighting the state of neglected buildings in the Johannesburg inner-city. Many of these buildings were heritage protected, and often evoked a level of pride from a certain sector of Joburgers. By painting the buildings pink, so much so that the buildings would be “crying, bleeding, leaking colour,” the intention, it seems, is (a) to expose the fact that the buildings are abandoned, (b) to highlight that this is particularly problematic in light of a lack of affordable housing in the inner-city, and (c) to instigate a broader debate about the role of buildings within cities.”

Herbert Prins, of the Egoli Heritage Foundation, had already responded to the first draft of UrbanJoburg’s thoughts on the matter in a comprehensive manner, and we are grateful that UrbanJoburg’s revised commentary takes his criticism into account, and is more nuanced and less explicit in its praise of bewareofcolour than their first draft.

The revised commentary does, however, contain criticisms of the ‘heritage lobby’ that I feel require a response:

1 - We don’t question, for example, why Urban Ocean (which apparently owns some of the buildings painted pink, including Shakespeare House) should be allowed to simply hold on to buildings in the hope, it seems, of eventually capitalising on a positive inner-city property market.

We most certainly do! The Johannesburg Heritage Foundation (JHF) has been vocally critical of Urban Ocean’s failure to protect the heritage assets that they own. We have for many years tried to get the City of Johannesburg and the Provincial Heritage Resources Agency (PHRA-G) to take steps against Urban Ocean (and others) without success. We would be happy to share our extensive correspondence in this regard with UrbanJoburg.

2 - Buildings become artefacts of exclusion:  closed off to a city in dire need of affordable accommodation; empty in the hope of one day attracting a high price tag; serving the interests of no one but its owner. Its usage value, in other words, is completely usurped by its exchange value, which is in turn largely premised on the fact of its architectural heritage.

This may be the view of the owners in question, but it is certainly not that of the JHF. We have welcomed and actively supported the reuse of heritage assets, where the law has been complied with. A good example is the conversion of historic Chrysler House into affordable accommodation by Afhco. Heritage is not the obstacle here!

3 - The value of bewareofcolour’s activism impacts more than architectural heritage, it speaks to the right to the city. …There is also, perhaps, a certain democratisation of the building: it is no longer a reflection of an apartheid or colonial past, but one in which people express themselves.

That the selfish actions of a Columbian-American can be thought to “democratise” a building, ridding it of “an apartheid or colonial past” is beyond me. In what way were those who live and work in the city allowed to express themselves through these actions? Were they even consulted? If they were, would the outcome even remotely resemble bewareofcolour’s actions?

We are very clear that heritage assets add texture and beauty to our city. Their destruction may create spaces that are useful, but seldom as meaningful. Johannesburg has always been a contested space – our city’s form and architecture is an expression of that. The destruction of heritage assets, for no better reason than intellectual posturing, is selfish and criminal. While bewareofcolour was destroying heritage assets, the Johannesburg Heritage Foundation has been hard at work at understanding and protecting them. And, before the accusation is made, we do not defend privilege and the status quo. We have been fearless in taking on well-funded corporates and government institutions when they have not acted in the best interest of our city, and our restoration work (funded largely by the tours given by our volunteer tour guides) takes place in the less affluent parts of our city. For example, the Lutheran Church in Doornfontein, St Mary the Less in Jeppestown, and James Mpanza House in Soweto.

We would welcome the opportunity to engage with UrbanJoburg, in the hope that we can clear these and other misconceptions.