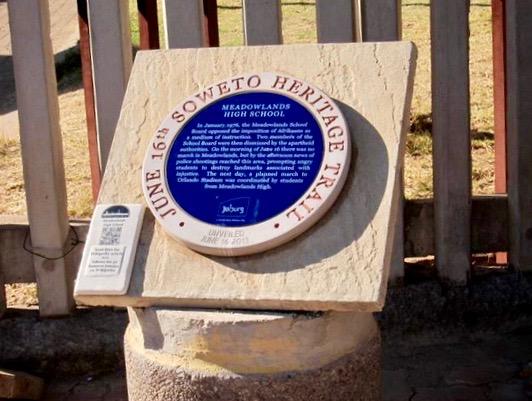 [First published 28 January 2013] If all goes to plan over the next few months, Johannesburg could become Africa’s first Wikipedia City. This means that visitors will be able to use their smartphones to scan QR codes placed on historic landmarks and be taken to a Wikipedia page containing fascinating information about the site. (A QR code is a smart phone readable bar code that contains web addresses). This initiative, known as JoburgpediA, has the potential to transform the way heritage information is consumed and could have huge implications for heritage education, preservation and tourism.

The project is being driven by Wikimedia South Africa and was inspired by a similar scheme in Monmouth, Wales where hundreds of historic sites including churches, schools, houses, bridges and even pubs received QR codes. Historic Monmouth now wears the title of ‘World’s First Wikipedia Town’ with enormous pride. Dumisani Ndubane, the president of Wikimedia SA, believes that Johannesburg, with its rich and diverse history, is the natural place to launch this scheme which could be rolled out to other towns and cities across South Africa over time.

In the past week the Wikimedia Team secured the endorsement of the Heritage Department of the City of Johannesburg. The Department agreed that ceramic tiles containing QR codes could be placed next to blue plaques that will be erected in and around the city during 2013. These include the Regina Mundi Catholic Church in Rockville, Soweto; the David Webster House in Troyeville; the Bram Fischer House in Oaklands; Naledi High School in Soweto and various sites in Mooki Street, Orlando East. Once this small selection is completed (assuming that funding can be secured) the idea will be to reach out to the heritage organisations of Johannesburg and get QR codes installed on all existing blue plaque sites and other historic landmarks.

The Wikimedia team plans to run editing workshops (and potentially a competition) to encourage the general public to add Wikipedia articles that will be linked to the sites. This is all in line with the organisation's overall goal of dramatically increasing the use of Wikipedia in South Africa and supporting the creation of local free knowledge and media.

Concerns have been raised about ‘accessibility’ as smartphones are generally seen as devices of the middle class. I can’t comment on how accurate this statement is but current trends indicate that in the next decade smartphones will become as common as feature phones are today (there are currently more feature phones than people in South Africa). Many African governments actually see smartphone technology as a tool to help them achieve their development goals. If data prices continue to fall this will certainly help JoburgpediA and similar initiatives reach a wider audience as well. We also have to acknowledge that the distribution of heritage information at the moment is very limited. Working off this low base I believe the JoburgpediA project can actually improve accessibility in the short term and transform it in the medium to long term.

The Wikimedia team will be encouraging people across South Africa to contribute to Wikipedia in their own languages. I am particularly excited about this… how amazing would it be to access information about an historic landmark in many of our official languages. At the moment, with heritage plaques for example, you can only incorporate a small amount of information which is usually in English. Wikipedia allows us to have thousands of articles in any language you can think of linked to a site. Wow is all I can say!