A Statement in Stone 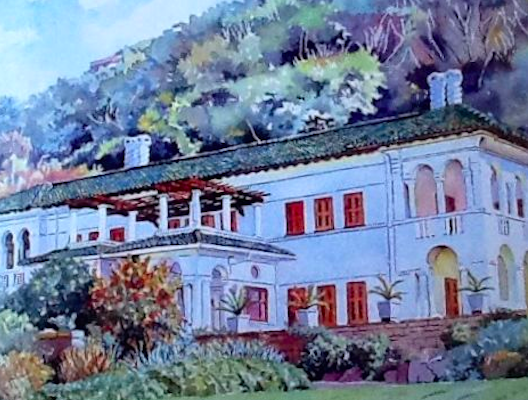 Michael Walker is a Cape Town local historian and resident. He has written a number of  books covering South African shipwrecks, railway journeys, coastal memories and then extended himself to the history of Simon’s Town, Muizenberg, Kalk Bay and St James. Now Michael has combined his interest in architecture and postcards to publish three works of interest to all interested in architectural heritage:

These books are an important addition to South African architectural history, heritage studies, the Victorian and Edwardian townscapes of Cape Town and Johannesburg and Africana collections. Michael is not an architect but has the enthusiastic approach of the amateur who becomes an expert on a particular aspect of collecting and local history. His insights and perspectives are ones that often escape the professional or the academic scholar.

The focus is on the architects of South Africa of the late 19th century and early 20th century and provide a useful compilation and compendium of information. The three books have been published in association with the Kalk Bay Historical Association. Michael has been a long standing member of the board of that Association. His books are self-published and that too brings challenges in design, layout and format.

The interest of these books lies in the combination of the researched text, the  photographs of many of the architects and the postcard illustrations of many of the buildings.

Of the three books, my favourite is A Statement in Stone (a Second edition, 2011 [removes the typographical errors of the first edition]. This book surveys the early buildings and their architects of Muizenberg, St James and Kalk Bay (1897 to 1927) as civic organisation, order and planning were imposed on the coastline and the steep slopes above the Main Road. This is the most substantial of the three books and is a hardbound, large format volume. The illustrations are a particular delight as they are drawn from postcards, photographs and the original architects’ plans and drawings. Reproduction of many beautiful water colour drawings are of elevations from the plans submitted for approval to the town councils, and capture bygone fanciful styles for modest cottage homes, churches, grand seaside holiday and retirement mansions, villas, hotels, pavilions and even cinemas. There was a mix of the public and the domestic, the civic and the commercial. Most wealthy leisured people came to False Bay to spend their money that had been made elsewhere in South Africa as they commissioned retirement homes, gracious mansions and simpler holiday cottages. But local commercial and business interest capitalized on the need for hotels, apartment blocks , cinemas and shops. Civic pride began to emerge in schools and churches.

In this book Walker establishes the format of presenting the particular architect and his principal works in the three small towns together with the illustrations of the particular villa, hotel or church. There is a chapter on Sir Herbert Baker and on the Baker partners in the Cape Town office. The importance of architectural partnerships is indicated but the significance of the structure of the architectural practice and a collaborative approach in design is not examined in a critical manner. Apart from mortality, why did architectural partnerships come and go, what made for success in a partnership and what was the balance between talent and financial management in an enduring partnership. The book does have a strong local history bent, as the work concentrates on the legacy of these architects in the Cape peninsula. For example, the work of the Lyon and Fallon partnership in their enduring prize winning campus layout design for Wits University in Johannesburg in 1919 is not mentioned, nor that John Perry designed the Johannesburg Public Library, completed in 1935. The biographical sketches include some entertaining family stories not normally found in architectural studies which adds human interest.

A chapter on the “bioscopes” and theatres  of the coastline together with an effort to include a couple of pages on the art deco architecture of Muizenberg is not seamlessly integrated into this history but actually enriches the coverage.

Finally, four prominent local builders, William Delbridge, Charles McCarthy, Willem Auret and Andrew Reid remind us that skilled immigrant craftsmen as well as locally born builders were men of many parts and often played an entrepreneurial role in their partnerships with the architects of the day.

The front cover of “A Statement in Stone”, reproduces a 1991 painting by Eric Judd of the impressive mansion, Watergate, on the Main Road at St James built in 1914, the work of the architect William Grant.

This is the type of book that one may wish to carry along on a tour when next you do the Muizenberg to St James seashore walk or take it with you to find so many of the grand holiday homes that still survive. In sharing this book with Johannesburg friends, the reaction has immediately been one of recalling glorious childhood Muizenberg holidays and delight at now learning more about the specifics of particular buildings.

In summary, Michael Walker’s book researches and presents the fine architectural legacy left by a diverse group of architects, dating from a time when the profession was emerging and adapting a variety of styles to specifics of the finances available and functions determined by a mixed group of clients for what became three desirable coastal holiday resorts.