This book by Brenda Schmahmann, Professor in the Faculty of Art, Design and Architecture at the University of Johannesburg, is the product of research supported by the National Research Foundation. It is serious, scholarly, provocative and very readable. The work gives a fascinating insight into transition and transformation through the medium of the visual arts, university insignia and art collections assembled by South African universities.

How do universities acquire status to demarcate and enhance their importance, relevance and presence in society? Schmahmann shows how art collecting, insignia and elaborate costumes worn at graduations are codes for conveying complex messages about positioning, the recreation of an image and significance. It was never a simple matter or just a public relations exercise. The redesign of so many universities in a transformed shape after 1994 to shift from a model of apartheid stratification or colonial rectitude to being inclusive, South African, culturally diverse, relevant and a lot more open was also played out in the forms, symbols and codes revealed in new coats of arms and art works. There has been a conscious effort to express the arrival of both old and new universities in a different political space. The remaking of the university (the amalgamation of previously segregated universities to become new higher education post-apartheid institutions, the conversion of technikons into universities, and changes in councils and governance) meant that there was a particular challenge to give accessible visual expression to these structural and intellectual shifts and indeed revolutions after 1994. 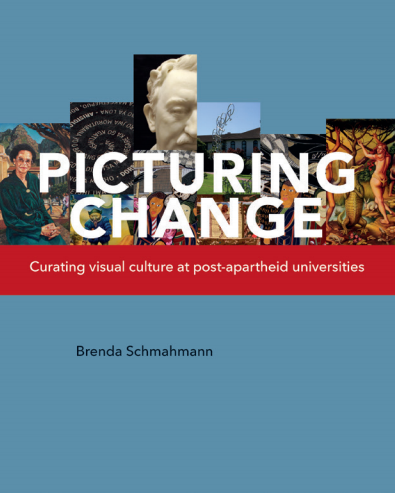 Universities are patrons, purchasers, repositories and depositories of public art. Art collections are among the tools of education in fine arts, sociology, history and anthropology. Art collections housed in galleries or even in spaces like libraries, council chambers and senate rooms accumulate through the decades to become part of the fabric of the institution, a treasured public commodity. But there is an expectation of accountability in the display, collection and interpretation of these art works. Often universities receive gifts of works of arts or commission works for museums or public spaces. The author largely concentrates on four South African universities – Cape Town, Rhodes, Wits and Pretoria, which almost stand for case studies of the visual transformative agenda, but other universities, for example the Free State and the University of Johannesburg, also feature. The study does not encompass architecture.

One particular challenge for many universities was what to do with older art works commissioned when different ideologies prevailed. The commemoration of the Great Trek had to be given a more distant historical perspective by the addition of new contemporary works of art at the Free State University. The Louis Trichardt ox wagon was an iconic symbol of the Great Trek and the makings of Afrikaner nationalism at the University of Pretoria but was dispatched to an off-campus museum.

Rethinking university insignia leads Schmahmann into investigating the shifts, adaptation and redesign of coats of arms, motifs and ceremonial dress to introduce new African identities and move away from Eurocentric biases, but heraldic continuities and traditions are still drawn upon. I was personally particularly interested in the chapter on art collections and new acquisitions of public art to support the repositioning and transformative agenda of a university. Wits University added to the duo of historical narrative paintings by Colin Gill and JH Amshewitz, which generations of students know from their study time spent in the William Cullen library, by commissioning Cyril Coetzee to create the third giant wall-filling canvas, T’kama-Adamastor, in 1999. It did not take long for this painting to become a traditional and almost iconic treasure and it did not raise any controversies.

Portraits, paintings and busts acquired by other universities reveal new histories, new interpretations and different priorities. It is worth remembering that these art works will themselves become representations that fit the struggles and mind-sets of the current generation and will age into fusty traditions. Another tradition that has been reinvented but where there is continuity is the commissioning of official portraits of university officers (chancellors, vice-chancellors, chairmen of councils). Portraits are meant to flatter, to compliment and to endure and hence artists with modernist leanings are constrained by their brief to portray verisimilitude. The official portrait marks a term of office and a dedicated service to the University and here the author discusses how some renowned South African artists have risen to the challenge. The problem remains where to hang such portraits of elderly, grey, mainly white males representing another era and other politics.

The Wits collection of portraits has now been moved from the Council Chamber and Senate foyer and consigned for safekeeping and care to the upper, remoter reaches of the Wartenweiler Library. They are still part of a tradition but now are much less visible as daily points of reference.

A final chapter addresses the delicate question of the arts, the pitfalls of censorship and the right to freedom of expression. Schmahmann discusses four case studies of art works at four universities which were perceived as controversial and raises the question of the management and responses of university authorities to external and internal criticisms. The 1996 ceramic ashtray in the shape of a vagina, entitled Useful Objects, crafted by Kaolin Thomson, was the winner of the prestigious Martienssen Prize at Wits and resulted in a row when the then deputy speaker of the National Assembly, Baleka Kgositsile, used her dislike and reaction to the work to try to modify the new Films and Publication Bill to be more repressive. The University stood its ground and did not remove the work from the exhibition.

In summary, this book by an art scholar of note is a balanced, original and well researched analysis of the role of the arts in the transformative agenda of universities. It is a beautifully produced book with a good selection of excellent colour photographs. It is a work that should appeal to all who are interested in South African art history in the making and should also be read by University movers and shakers who wish to patronise artists and grow their art collection while at the same time thinking about the meaning of their authority and how they wish future generations to view their legacies. This is particularly apposite now that so much art is being produced to honour the memory of Nelson Mandela, some of which will no doubt find its way into university collections. Art is a source of pride, of identity and expression, but we are usefully reminded that there is also a political dimension.