Review of Tea at Ansteys 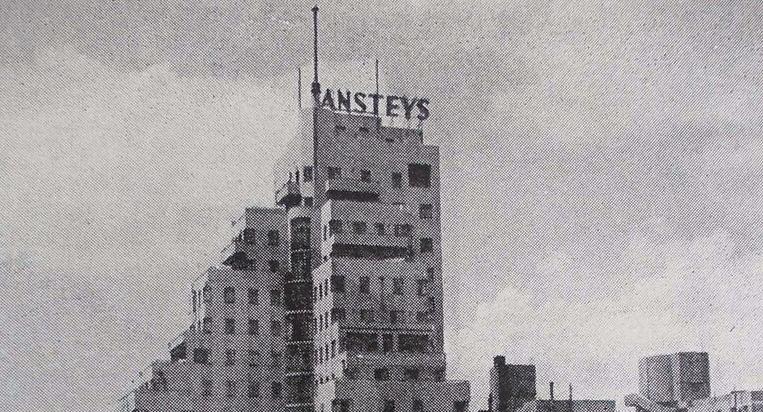 Review of  Tea  at Ansteys, photographs by Mark Lewis and words by Tanya Zack, Fourthwall Books, 2015, illustrated 35 pages. Price  R 200, First Edition 150 copies. Tea At Ansteys is number 6 in a series of 10 small book or rather booklets, Wake Up, This is Joburg, published by Fourthwall Books, 2015. With a first edition of only 150 it is an almost instantly collectable item of Johannesburg Africana. The series which puts the emphasis on the contemporary city, switches the name from Johannesburg to the more viby “Joburg” (a visitor to Johanesburg told me it took him about two weeks to  figure that Joburg, Johannesburg, Egoli and Jozi are all the same place). It is a gift to posterity to record and document the city of the 21st century and tell the stories of the people who live in the inner city in the renovated apartment blocks such as Normandie Court or Castle Mansions or in this case,  Ansteys. The scene and feel of the art deco period icon is set with the gleaming gold cover and the small pasted on photograph of the exterior of the Ansteys building in light and shade. 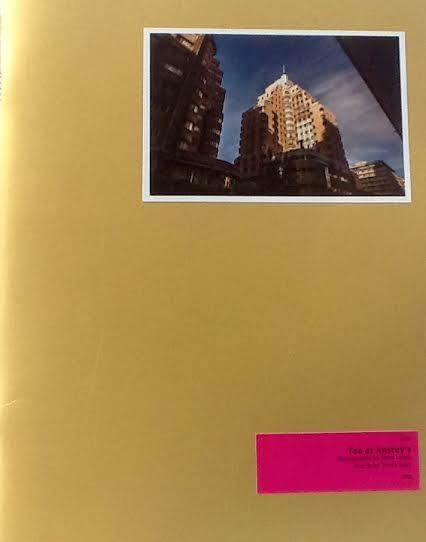 The name came from Norman Anstey the founder of the  department store, who was mayor of the then town of Johannesburg in 1913-15 (during the  time when the Town Hall was being built). The first Ansteys went up in 1907 and was located at 88 Eloff Street. Then there was the second Ansteys of 1911 commissioned by Norman Anstey (not far from the third building) which is still standing, at corner of Kerk and Joubert Streets. That building was a mixture of turn of the century Edwardian and anticipations of art deco and later modernity. 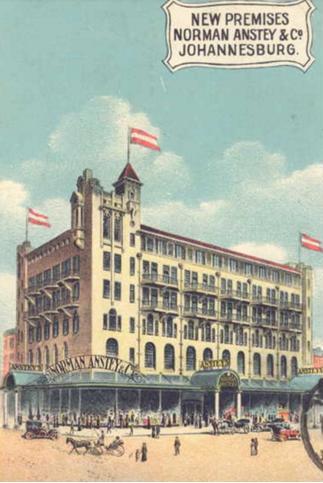 The Third Ansteys was an indication of success of a retail emporium and was bigger, better, grander and more modern than the predecessors. Ansteys was undoubtedly a great property investment for the company and the Anstey family. Its construction coming in the post-depression years of the nineteen thirties, a time for South Africa of economic expansion, showed exuberant confidence in the city, its settled population, the expanding suburbs. After coming off the gold standard at the end of 1932 the South African economy went into expansion mode and the many Johannesburg classic art deco buildings of the decade were a consequence of that confidence and boom times. Architects were open to new technologies in using reinforced, steel, glass and concrete in almost plastic ways to create a department store of vast open floor spaces. 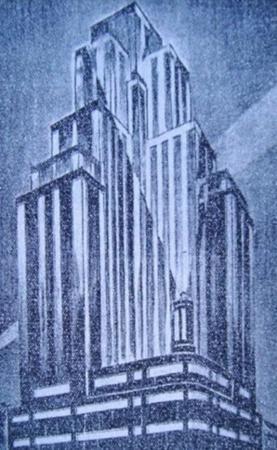 The new Ansteys was located at the corner of Joubert and  Jeppe Streets (stands 118/19/20). It was the third Ansteys building and its sheer size signalled the success of the firm and also referenced the love affair with modernity and all things New Yorkand America of the thirties. Anstey’s Building was designed in high art deco by the architectural firm Emley & Williamson. Construction started in 1935 ( the contractor was Reid and Knuckey) and was completed in 1937. The design was in a distinctive Deco ziggurat style (an international motif of the style, that one  sees echoed in textiles,  jewellery , furniture as well as the architecture), with  rounded  corners and curved plate glass windows  frontage at street  level  and with a setback sky scraper high rise core, set back from the street almost pyramid like. It rose to 19 storeys high, with a further two basement levels. The two stepped wings, at about 6 levels set at right angles to one another contain the spacious apartments. The corner flats featured bay window balconies. There was a central tower with a spire topped by a flat pole. The entire edifice rose to 233 feet (just three feet shorter than the 1930s Escom house on Rissik Street) or 55 metres. The aspiring sky scraper age had arrived. The effective 19th floor comprised the servants quarters, ablution facilities and the lift engine room. The construction materials were a reinforced steel framed building and plastered brick and windows were of steel.  By this stage the South African building industry had come of age. 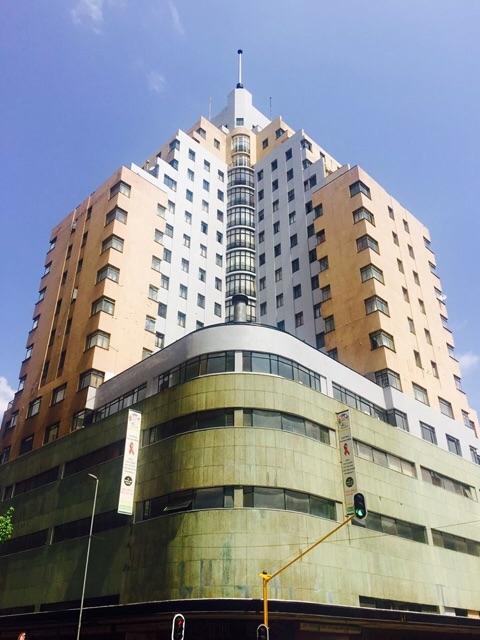 The grand department store occupied the lower four floors  plus basement floors. For a brief time in the decade of the thirties, the building held the title of being the highest and most recent sky scraper in the city. The title of tallest city building was soon surpassed, but Ansteys remained and landmark high rise prestige building from the Art Deco era. It was certainly the most handsome looking of the department stores. The CEO of the Anstey company at that time was Hugh Manley Anstey, son of the firm’s founder, Norman Anstey. 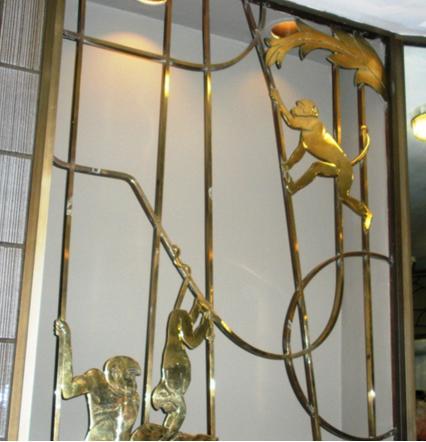 However, in this book the past is only the grand backdrop. As transition and change happened in Johannesburg of the eighties and nineties the inner city became a less desirable and much neglected place to live. Ansteys had closed as a department store and small shops, offices and studios took their place. White people began to leave their apartments in the inner city, and fled to the suburbs. Buildings stood empty and some decayed. It was a miracle that the building was not demolished as was proposed in 1989 when Sanlam Properties planned to redevelop the whole block... courageously the architect commissioned by the developer refused to apply for demolition.  Instead a Preservation  of  Anstey’s Trust was established .  The refurbishment of Anstey's commenced in January 1994 under the direction of the architect Denzil Hersch. The New Housing Company took ownership to redevelop the building as a combined commercial (the two lower basement levels, ground, first second and third floors)  cum residential complex.  81 affordable residential units between the 4th  (in fact the fifth floor) to the 17th floors, were created at a total development cost of approximately R 4 million. The commercial sections remained the property of the Preservation of Anstey’s Building Trust and these sections were let to small businesses.

Then came the sectional title scheme for the residential units with sale to individuals. It was not a success story all the way as even after sectional title many of the flats were  knocked down at auction for R 5000 to R10 000 and by the early 2000s the building became indebted to the  city municipality the result of unpaid bills.

But this book tells the story of the rebirth and revival of Ansteys as a home and apartment blockfor people of mixed fortunes, mixed races, and diverse professions who chose to return to  live in the block after it was saved from demolition.  It is a great Johannesburg story from pinnacle of success to despair and planned demolition but then came a fight to save Ansteys, to revitalise and  renew and adapt a grand city icon to new purpose.  It is a very contemporary story.

The book recounts the taking tea with the different people living in the Ansteys building in the here and now who serve not only tea but their memories going back to the 1980s and 1990s. These are people who in the opening up of a democratic South Africa with residential restrictions no longer in place moved from unsafe and turbulent Soweto to the inner city in search of better accommodation and a better life. Brenda and her daughter Nicole who have lived her since the 1980s, then comes Palese Ramatlo of the 7th floor whose flatmate James Amaoh, who hales from Accra. Artists, musicians, journalists, photographers and creative types thrive in Ansteys and constitute a community.  Zack gets at the gritty texture of life in the city with its rebirth, glamour and revival but with also with the fear of crime and some anxiety about personal safety not in the building but in the city’s streets. Ansteys sounds like a building that has come a full circle. Today there are 15 floors of flats, artists’ studios, an HIV clinic and a crèche in the building. The young, the energetic, the adventurous and  those who see the prospect of a good return on their investment in the now sectional titled building live here. This book offers a selection of personal stories of people who live in Ansteys.

As it stands the book is almost a sociological study (but it is not the academic type of structured interview) of a moment in time in a timeless place. There is a good selection of anecdotes. Half of the book in fact comprises photographs, taken by photographer Mark Lewis of the people who live in Ansteys in various poses, of their possessions, their lifestyles and the  panoramic views from the upper storeys.

If you are expecting an architectural history or a case study of a building in transition you will be disappointed. Here the  main sources of information about the Ansteys building remain Clive Chipkin or Van der Waal, the Artefacts website or the Heritage Register (containing the excellent survey data compile of Dr  J J Bruwer in 2002).  Bruwer’s report usefully contains the original floor plans of the building. Tea at Ansteys should have mentioned that the building acquired National Heritage status (mid 1994) and was awarded the familiar bronze National Monuments Council plaque and when changes happened in heritage legislation, it became a Gauteng Provincial Treasure. A prestigious blue plaque marks the buildng as well. 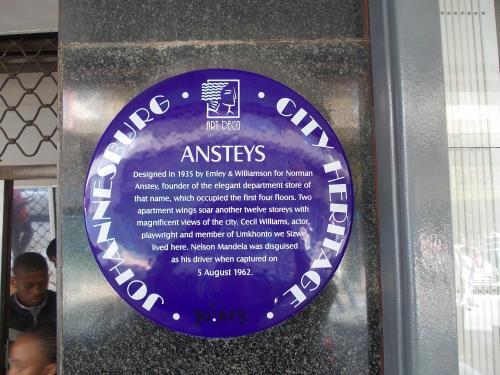 As can be noticed from the City Heritage Blue Plaque, there is a Mandela association with Ansteys. Cecil Williams, lived in an apartment on the 16th floor of Ansteys buildings. Williams was a well known stage director in Johannesburg and he was also a member of the Communist Party and Umkhonto we Sizwe. In 1962 Mandela was assisted by Williams in his efforts to escape arrest; his disguise was as a driver of the Cecil Williams. The plot failed and Mandela was arrested on 5th August.

The efforts of the Johannesburg Heritage Foundation and a team led by Flo Bird  was heavily involved in saving Ansteys in the early 1990s.  I certainly would have liked a fuller account of the history of Ansteys as landmark building of Johannesburg.  If you expected an account of the history of Ansteys the archetypical 20th century mega store, again you will be disappointed. There simply is no tea at Ansteys the department store and it is for this reason that I have added some of the architectural background to this review.

In summary the book simply does not to justice to the history of the building and why this is such a significant building in Johannesburg and at R200 for a booklet it is an expensive  number. One has to look elsewhere to capture older memories. The book has inspired me to  write a piece on my memories and the shopping experience that I enjoyed as a young person when I actually took tea at Ansteys.