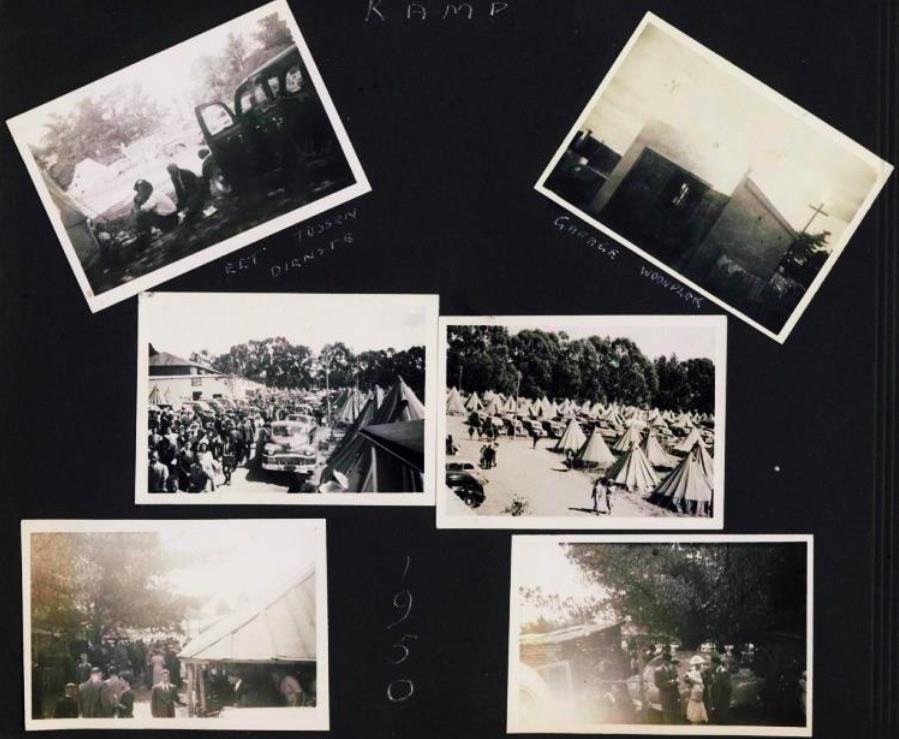 For many heritage enthusiasts, archivists or historians, old photographs and photo albums are of considerable interest and do not turn up very often. Places to look for old photos are auctions, junk shops or car boot sales, or even online sales like Bidorbuy. The album that I discovered, with three sets of photographs representing two separate mystery occasions, was found at the Hospice Witwatersrand charity shop in Orange Grove, Johannesburg, about ten years ago. I photographed the individual photos for greater clarity in trying to determine what this event was and where it was held.

The photographs are rather vaguely dated and the two occasions, which are 40 years apart, are not described, nor the locations given.  The first two sets of photos are from 1950s and a third set has no date but from the clothing must be from around 1910. It looks like these two events were Salvation Army events or jamborees as some of the men wear The Salvation Army badges and one or two carry Bibles.  One thing that is notable from all the photographs is that these were very formal events and participants were well dressed in what looks like ‘Sunday best’, especially in the 1950s set of photographs. The 1950s event must have been an overnight event judging by the large tent settlement. This was also clearly a family event with lots of moms shepherding children along.

The photographs capture pre-war (1910) and post war (1950) gatherings of The Salvation Army at some place in the Transvaal, South Africa.  What is interesting is that there are no photographs of any formal religious services or prayer sessions, or of any persons preaching to the gathering. Perhaps those photographs were removed from the small album before being donated to the Hospice Charity?

What remains unclear is the location of these two events and whether they were held at the same place. Some of the photographs were very small and did not enlarge as quality photographs, but I’ve included them anyway. Again, grateful thanks to Sandy Buchanan for helping with the identification of the cars, but he did add that the photographs presented many problems in identifying the rather grand cars of the 1940s/1950s. The body shape is the first clue to a fairly accurate date of the car. Typically one needs the front grille or side views for full identification. Complicating matters is the practice by some manufacturers of “badge engineering” in the motor industry. Chrysler Corporation and British Leyland were prime examples. Each produced a basic model as a cheapie, and then added extra trim and features or engine options not available on the basic model. Examples of Chrysler’s products were – the base model called the Plymouth. Then extra features on the same body and chassis and the car became the Dodge. Then a further enhancement and it became the de Soto. Then a final and fourth upgrade and we had the Imperial model (Sandy Buchanan).

Two of the photographs on a page labelled with “1950” are labelled in Afrikaans, as is the page title, ‘Kamp’ (camp). The venue for this event could not be identified but may be some agricultural show ground or farm in the Transvaal Province. The two number plates that could be read in the photos indicate a Transvaal locality (number plates TJ for Johannesburg and TCB for Belfast). 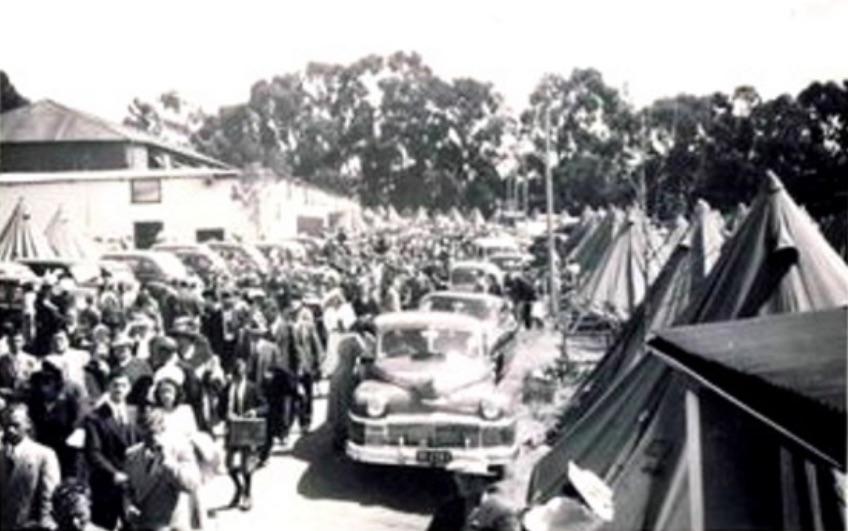 No caption, but dated 1950. Did all these smartly dressed people really stay in these primitive tented conditions for the duration of this event? Where were the ablution and dining facilities for so many people? It is interesting that so many people were able to walk unrestricted next to the flow of cars. The car in the foreground is a 1946 Dodge or Plymouth, both similar cars (Identified by Sandy Buchanan) 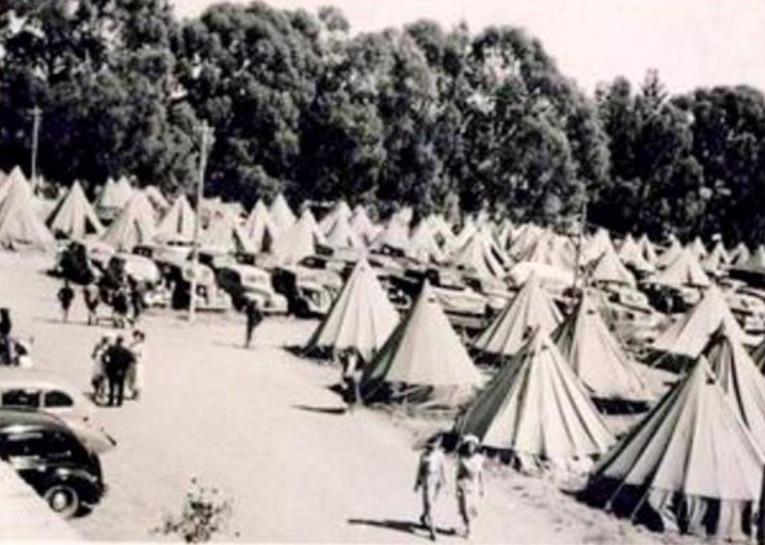 The tented camp – a contrast to the formal clothing worn by the participants. There are no details on the photographs of where this camp was located.

Crowds of well-dressed people thronging through the venue. The structure on the right may have been selling food and drink. 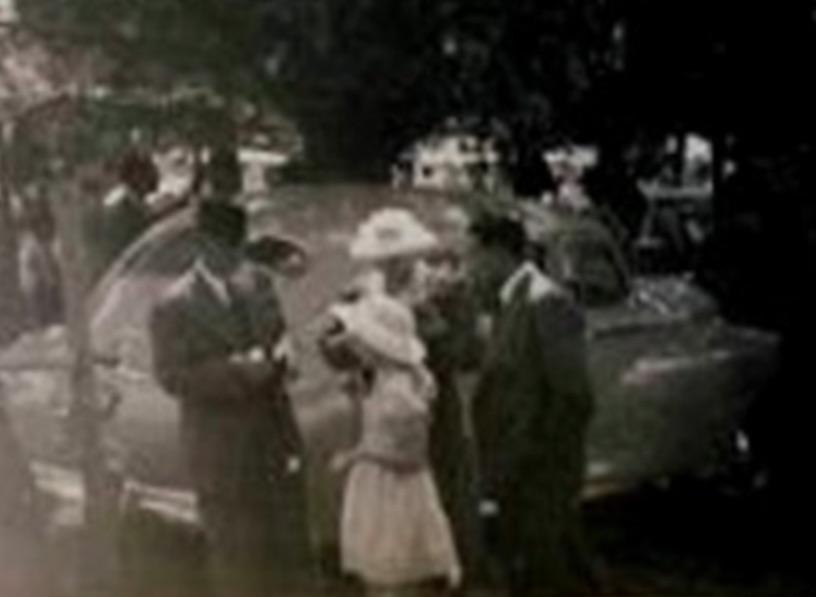 Family group in their best clothes and hats, 1950. The location of this event is unknown. The car may be a Dodge of about 1940’s vintage, but one would need to see the front grille to be sure (Sandy Buchanan). 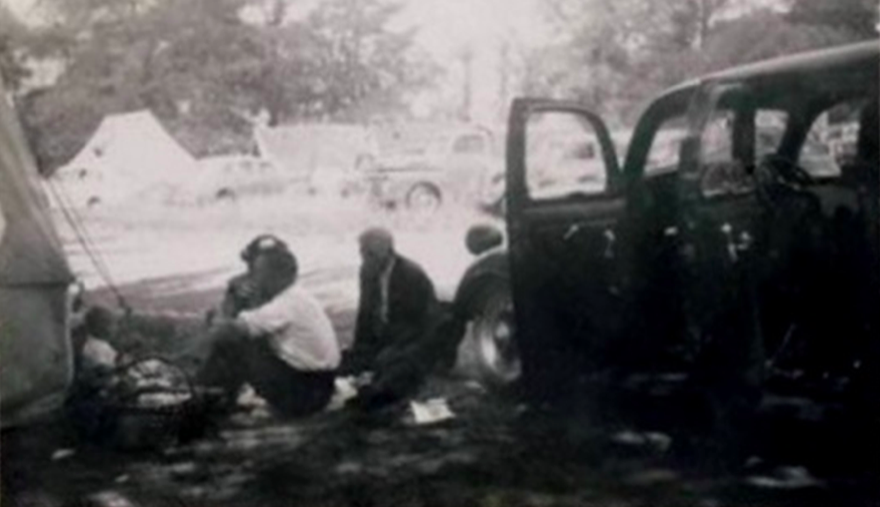 This photograph of a family taking a picnic meal is labelled, ‘Eet tussen dienste (eat in between services) seeming to imply that there were on-going religious services (‘dienste’) that we being attended by the Salvationists (photograph dated 1950). It may have been that participants had to bring their own food with them, rather than, or as well as, being catered for in some dining hall arrangement. 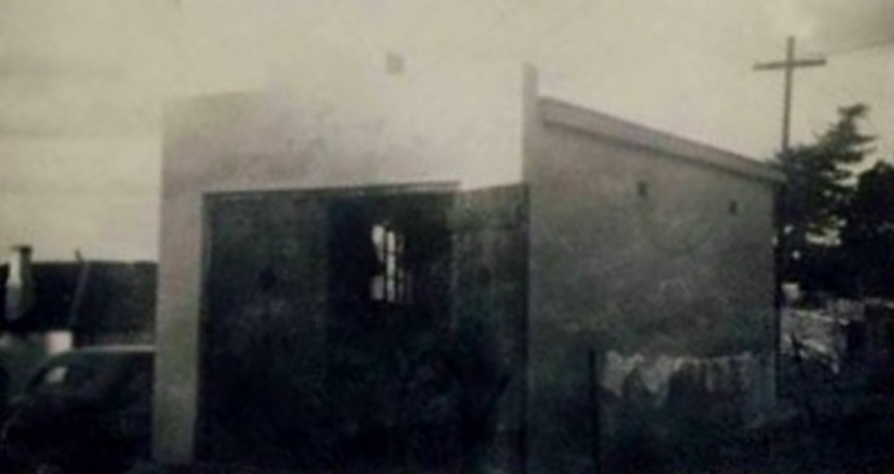 This photograph is labelled 'garage woonplek' (garage residence). I originally thought that there was a Christian cross in the background, but it is only a telegraph pole! (dated 1950).

The second set of six photographs from 1950

Collage of photographs from Salvation Army jamboree via Sue Taylor.jpg 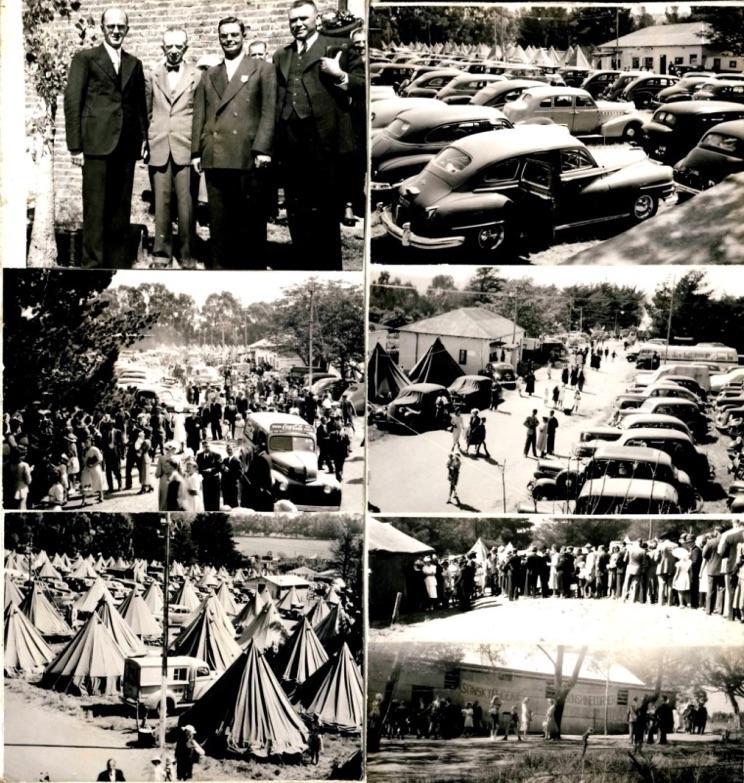 Another page from the photograph album. Although there is no date on this page, one can assume that these images are part of the same 1950 event judging from the tents and cars. 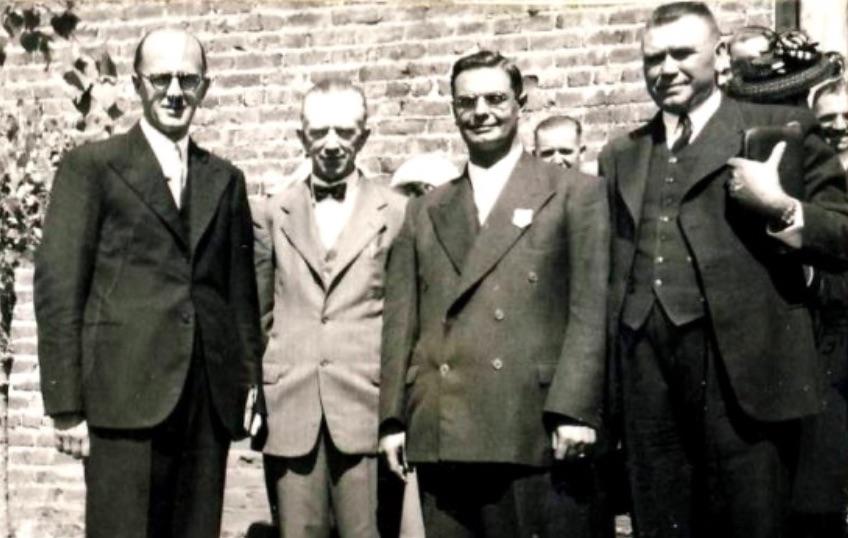 Writing on the above page states that the men, presumably those three men in the dark suits, are (Left to right) “A.J.S. Howard Carter, England and GR Wessels and E.J. Smith.

One of the men is wearing the Salvation Army badge, and Mr EJ Smith is carrying a Bible. These men may have been the leading pastors for this event, but are not named as ‘Reverend’ in the caption. These names do not show up online. One of the men, presumably the man in the pale suit, is not named. Mr AJS Howard Carter is also not the British archaeologist, Howard Carter, of 1922 Tutankhamun fame.

All dressed up at a Salvation Army jamboree via Sue Taylor.jpg 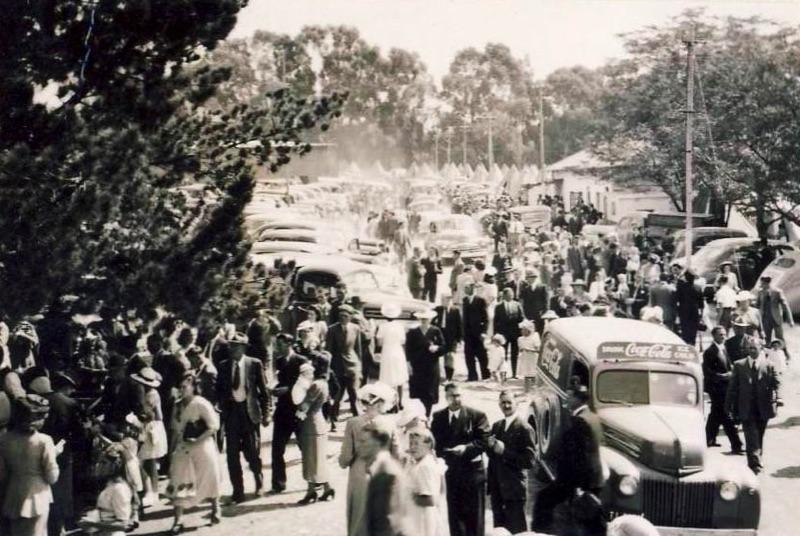 Good family folk in their Sunday best. Where was this event being held? Note the wonderful Coca Cola delivery vehicle! Many of the women carry babies or have their children with them  (1950).

A queue for food at a food tent? Looks like there were difficulties in providing sustenance to the crowds attending this event (photo dated 1950).

Tents at a Salvation Army event in 1950 via Sue Taylor.jpg 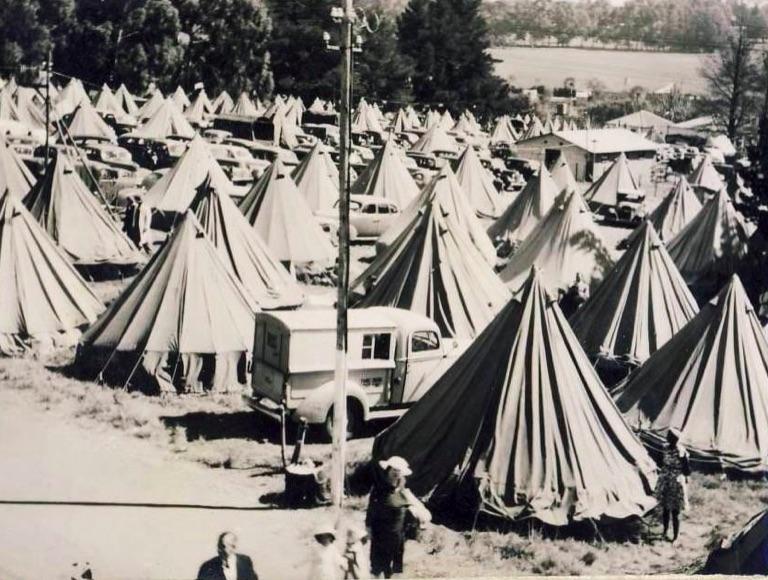 Who would have supplied all these tents for this Salvation Army event in 1950? Note the open farm field in the background.

Sunshine corner at Salvation Army event in 1950 via Sue Taylor.jpg 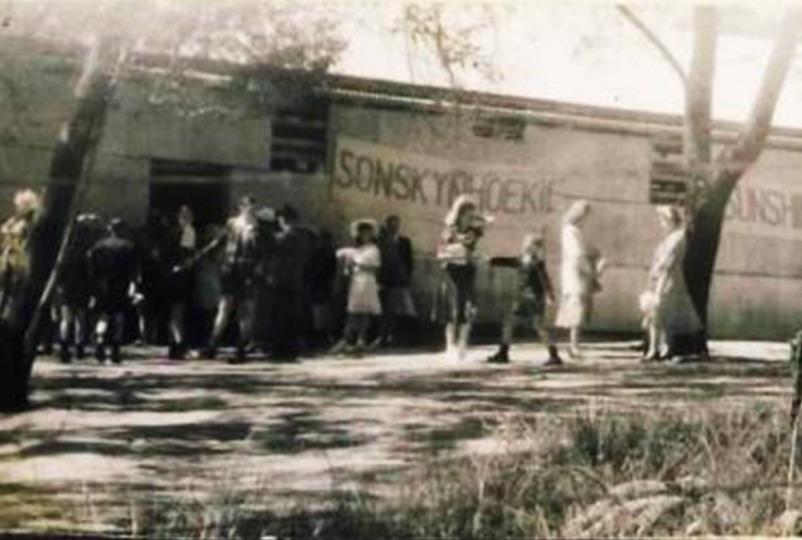 This building is labelled banners declaring 'Sonskynhoekie' and ‘Sunshine Corner’. The Sunshine was the name for a preschool system run by the Salvation Army.

1940s cars at a Salvation Army event via Sue Taylor.jpg 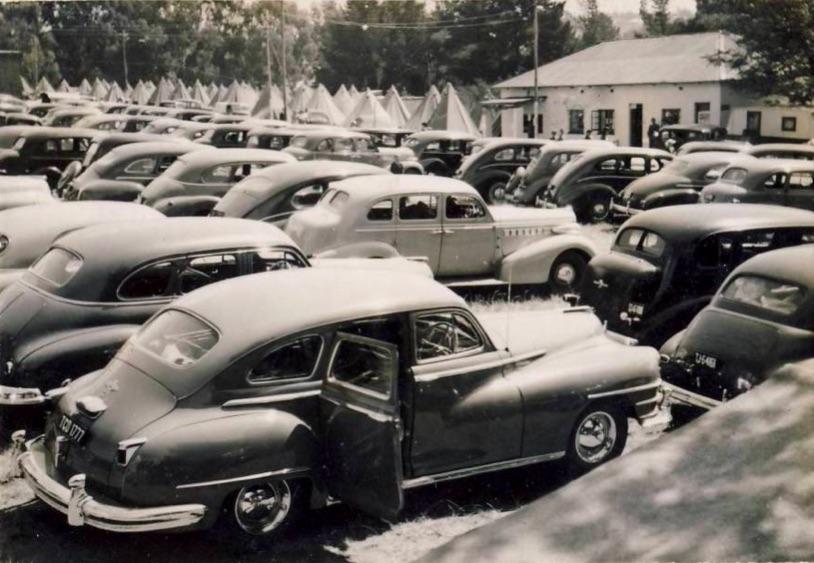 Clearly an event for affluent persons judging from the cars (photo 1950). Lots of approximately 1940/5 cars. The car in the foreground with open door is a Plymouth or Dodge (Sandy Buchanan) and has a Belfast (TCB, Transvaal) number plate. The car in front of it has a Johannesburg (TJ) number plate.

Cars and people at Salvation Army event in 1950 via Sue Taylor.jpg 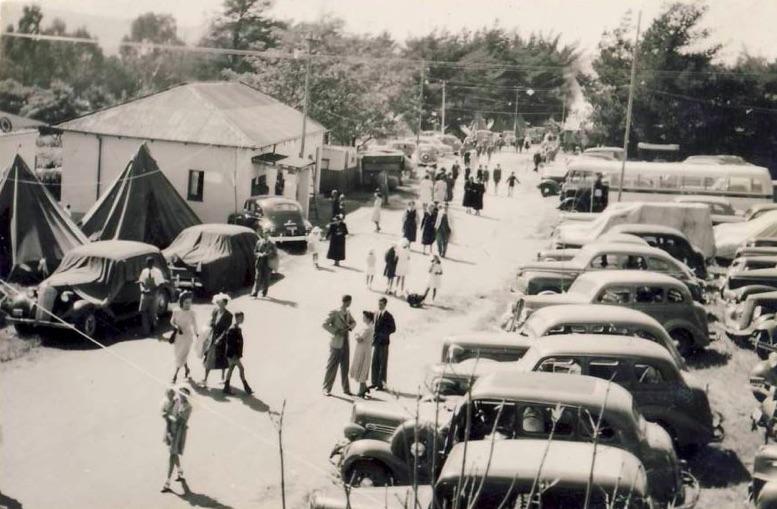 Another view of the locality that appears to be a suburban or small town setting, with lots of open areas for tents and cars (1950). On the left are two cars under covers. The first is a 1937 Chevrolet or Plymouth, the 2nd I can’t identify, and the 3rd is a Ford V8 of approx. 1941 vintage. The single decker bus on the right is a half cab Leyland (Sandy Buchanan).

An earlier undated event (circa 1910)

This must be about 1910 judging from the clothes and hats. The building behind the group looks like a barn. This event was also very formal, and there are no families evident. All of the women look past child-raising age! 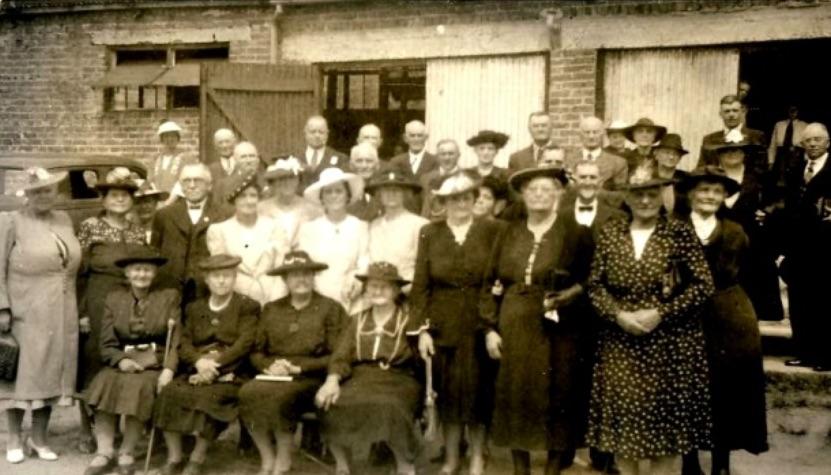 Undated event, group of men and women. One of the men at the back is wearing a Salvation Army lapel badge. 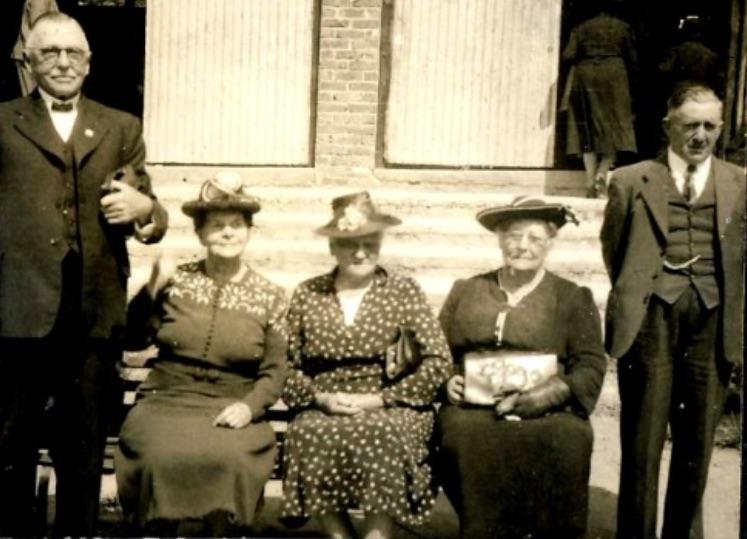 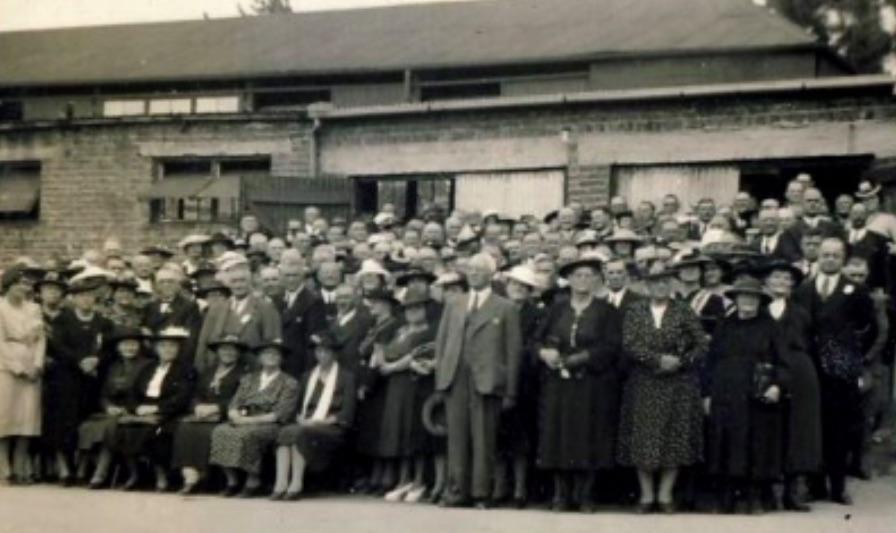 Again, many of the gentlemen seem to be wearing the Salvation Army badge on their lapels in the photographs above and below (circa 1910).

The Salvation Army began in the UK in 1865, when William Booth (1829 – 1912), a London Methodist minister (seen below addressing a gathering), decided to take the Christian message into the streets where it would reach the poor, the homeless, the hungry and the destitute. His original aim was to send converts to established churches of the day, but soon realized that the shabby and poor did not feel welcome in the pews of most of the churches and chapels of Victorian England. Booth decided to found a church especially for them. In 1870 the first permanent meeting hall was established at a covered market in the Whitechapel Road known as the People’s Market. It was renamed the People’s Mission Hall and adapted to include a hall to seat 1500, a tea room, shop and soup kitchen. The spiritual and philanthropic work of the then named Christian Mission expanded across London and to towns beyond – the beginning of what was to be The Salvation Army.

Drawing of William Booth preaching to the poor in a makeshift venue in Whitechapel - Salvation Army website.jpg 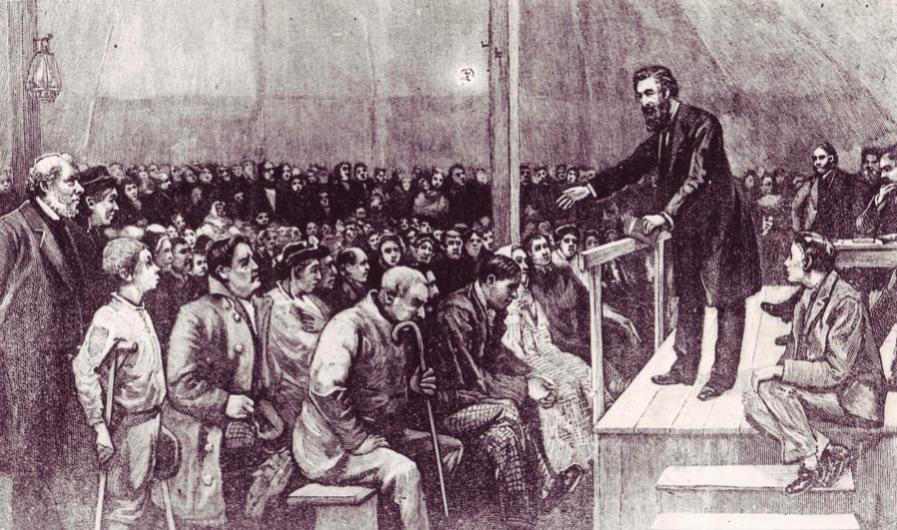 Drawing of William Booth preaching to the poor in a makeshift venue in Whitechapel, circa 1865. This congregation grew to become the Christian Mission and in 1878, was renamed as The Salvation Army (The Salvation Army UK website).

The Salvation Army has been in South Africa since Majors Francis and Rose Simmonds and Lieutenant Alice Teager arrived in Cape Town on Saturday 24 February 1883 to set up a Salvation Army Corp (church) in Cape Town, and another followed quickly in Simon’s Town. Later that year, with the arrival of additional Salvationists, a second corps was opened in Simon’s Town in October 1883, in Port Elizabeth in February 1884. This was followed with another corps opened in then Natal (now KwaZulu-Natal) in March 1885 and in 1886, a corps was established in the  recently-proclaimed gold mining village of Johannesburg. Today, The Salvation Army is represented by nearly 250 churches in South Africa, Lesotho, Namibia, the Island of St Helena, and Swaziland where the Christian message is preached in 10 languages.

As well as also having its own flag and a military-type uniform, the Salvation Army also has a characteristic metal shield that was worn on the lapel and is highly recognisable.

These metal shields were worn as identifying badges from the early 1880s. There have been various versions and pins but the Stirling silver Salvation Armey shield badge on the left, circa 1910, is probably the form of the badge worn by the men in the set of South African photographs.

Sue Taylor biography - Sue Taylor holds a PhD in Plant Biotechnology from the University of KwaZulu-Natal, South Africa. Her current interests encompass cities and urban greening, material culture (and what trash can tell us about society), degraded peripheries and researching the disintegration (and rehabilitation) of landscapes and buildings. She has just completed a three year research partnership with the Afromontane Research Unit, QwaQwa, University of Free State (South Africa).