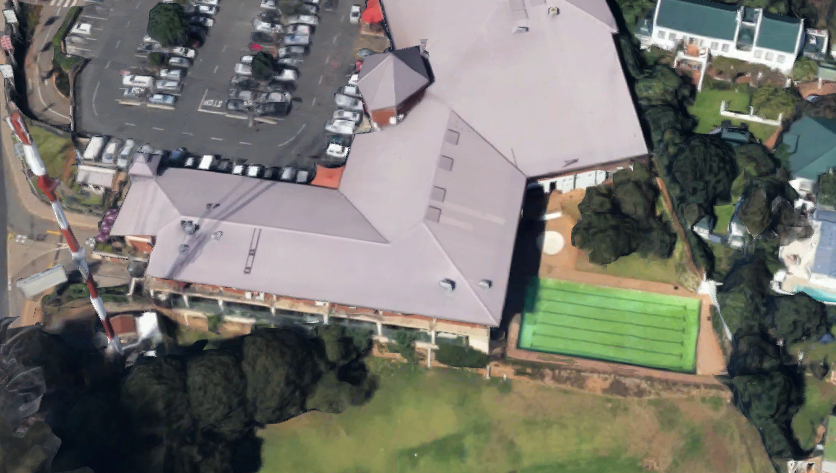 Approaching from “Old Melville” (Seventh Street), along Fourth Avenue, we cross Main Road, (which I think used to be called “the Muldersdrift Road”), where we find today a shopping centre, with a public swimming pool hidden somewhere in its bowels. This was where the Municipal Swimming Pool used to lie. The existing pool (pictured above and below) cannot meaningfully be compared to the wonderful facility that existed 50 years ago. 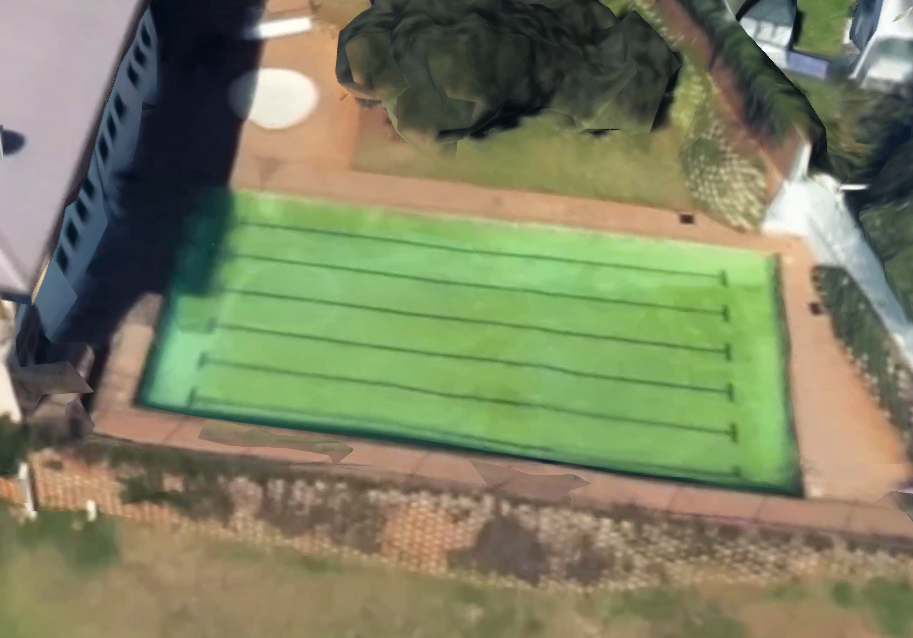 A zoomed in shot of the existing pool (Google Maps)

September 1st was always a red-letter day, to be looked forward to with eager anticipation, since this was the opening of the “swimming season” – yet invariably we were told, when the day finally arrived, that “it was better to wait for the first rains” before taking the literal plunge. What the first rains had to do with it was, and remains, difficult to understand: perhaps if we were about to swim in a river or dam, still polluted after the long, stagnant winter, this idea would be comprehensible – but the “baths” in Melville had a truly impressive filtration plant that kept the water crystal clear at all times.

Surrounded by a sturdy eight-foot high yellow-brick wall, the “baths” as we referred to them (always in the plural) were truly a facility of proper municipal proportions: a veritable “pleasure-dome”, provided by a municipality which saw as its primary duty service to the citizens of the City.

As one entered the main door in Fourth Avenue, one paid a penny – or it may have been a tickey (a three-penny bit) - to the lady in the cash booth, which was similar to the box office in an old bioscope. In the lobby, one immediately became aware of the squeals and shouts of delight emanating from the pool – and the pleasurable anticipation was heightened…

One – if one were male – turned to the right where the change rooms were located, and speedily changed into one’s swimming costume. Clothes were handed to the attendant, who placed them in a wire basket, and issued a disk – a round piece of aluminium with a number stamped on it – attached to a circlet of thick string. This was placed round the wrist – or the ankle for those who wished to cut a bit of a dash – and one then descended the stairs – which were beautifully polished red grano – paddled through a tiled foot bath, and the glories of the pool were revealed.

The pool itself seemed immense – I suppose it was the standard Olympic size, but to small boys, it represented everything one could wish for in the hot summer months. The pool was tiled throughout in white, with a type of gully running around the edge, made from especially moulded tiles. These were kept clean by ancient men who seemed to spend their working lives on their knees as they worked their way around the pool, scrubbing and wiping as they went. I was told that they were indigent people who took on this most menial of work to keep body and soul together – but this didn’t stop ruffianly boys from deliberately creating splashes as they dived or jumped into the water, designed to wet the cleaners. The ruffians were invariably rewarded with some suitably salty language.

The pool was equipped with two diving boards: a low board and a high board, which didn’t seem too high until one got to the top, when it suddenly became very high indeed.

There was surely no more comforting experience than to climb out, shivering from a long session in the pool, and to lie on the warm slabs of black slate set into the lawn, until it was once again time to take the plunge. The slabs of slate would, I’m quite sure, have been of interest to archaeologists in a few centuries’ time, as they displayed some really interesting graffiti – carved deep into the stone were various names, dates and words, perhaps commonplace today, but strictly verboten then, as well as various voluptuous female forms, some displaying an astonishing degree of gynaecological detail that was completely mysterious to us small boys. Pondering on these matters at this distance in time, one is struck by the fact that it was invariably the male gender that engaged in this form of art; where were the female graffiti artists with their take on the important things in life? But here perhaps we make a slightly dangerous incursion into the realms of feminist philosophy… could it be argued that the patriarchal suppression under which the female gender had so long existed had stultified any artistic bent in girls and young women? Or is there another, simpler, explanation?

Anyway, back to the pool: a bow-fronted structure at the top of the terraced stairs surrounding the baths was the inner sanctum where the much feared “Superintendent” did whatever Superintendents did. He had a public address system which he used to admonish - and threaten with expulsion - any mischief makers. Always dressed in immaculate white safari jacket and shorts with a distinctly nautical air – the jacket sporting the beautiful old Johannesburg crest – these gentlemen carried with them a whistle which they used to good effect in controlling unruly behaviour.

Perhaps the most abiding impression I have of the Melville swimming baths (as mentioned, always spoken of  in the plural – there was a second, “baby” pool) is that of cleanliness: sparkling water, gleaming tiles, highly polished floors and brass-work, and newly varnished wood-work. Permeating the air was the not unpleasant smell of the chlorine or whatever chemical was used to keep the water fresh, mingled with the scent of recently cut grass, as the lawn between the slates was kept immaculate. Litterers would be dealt with summarily by the Superintendent and his acolytes.

But not only did we visit the baths on sunny days – occasionally, on a warm Friday night, we would be given leave to walk up through Melville to the pool, and there was always something special about swimming in the evening. There were usually members of the Water Polo Club practising then in their roped off section, but we would be sure to steer well clear of them: they were large and loud.

As we all know, while Johannesburg experiences some very warm days in summer, the evenings usually cool down considerably – and we were always pretty chilled – in both the traditional and contemporary senses of that word – by the time we had dressed in our khaki shorts, shirts and sandals (de rigueur dress for boys of our class at that time), and set off for home. But one of the really delightful aspects of these outings awaited us still: next door to where Mays Chemist is now (it was probably Mays Chemist even then) was a fish & chip shop, or sometimes we stopped off at the Venus café on the corner of Fourth Avenue and Sixth Street. Both of these establishments sold for sixpence a packet the most delicious fried chips, always piping hot out of the (well-used and flavoursome)  bubbling oil, wrapped in white news-print, and exuding a tantalizing fragrance. I can still taste the chips today - so hot that one had to eat then with one’s mouth open in an attempt to cool the tongue – doused in a really potent vinegar and covered with coarse salt, a veritable ambrosial treat. Such are the simple things of which our fondest memories are made. Sometimes, when the budget stretched to it, we would also be able to buy a “tickey” Coke each – in those original little bottles, said to have been designed after the fashion of a Victorian lady’s bustle. The bottles would of course have been kept, because they could be handed in at any dealer’s and a penny deposit would be repaid per bottle.

A final memory is related to the chill we felt on the journey home: I’m not sure whether or not it can be scientifically proven, but we found that as we walked along the road, and cars  approached from either back or front, we could actually feel the warmth of the head lights sweeping across our bare legs.

These delightful evenings always concluded with “a nice hot bath” ( hot baths, like cups of tea, were in those days always “nice”) before collapsing into bed.

If anyone has photos of the original pool please add them in the comments section below or email jamesball01@gmail.com.

About the author: William Gaul was born in that part of Melville which was known as “Melpark”, presumably to (snobbishly, perhaps) distinguish it from Melville proper. “Melpark” is the part of the suburb that lies on Rustenburg Road. Schooled locally, he then attended the Johannesburg College of Education where he qualified as a teacher. Later, he was appointed as a lecturer at the College, after obtaining a BA (Hons) degree, and still later as a lecturer as what was called Midrand University, where he lectured Psychology and Ethics. He holds a M.Phil Degree in Applied Ethics from St Augustine College. His main interests are, however, heritage and botany.