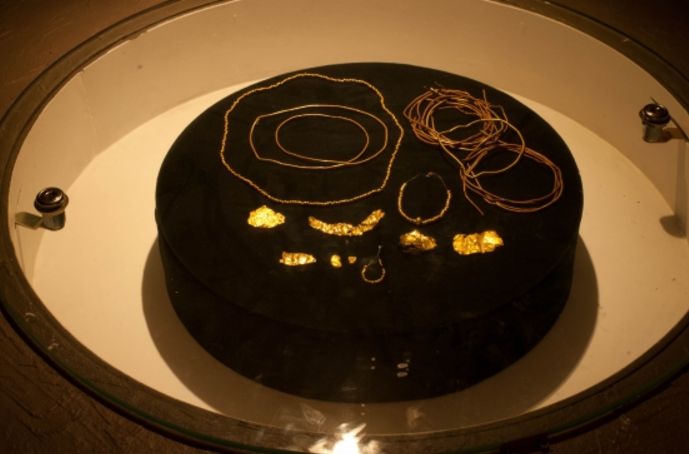 Experts call the disappearance of gold artefacts ‘colossal’, ‘a travesty’ and ‘serious breach of security on the part of SANParks’. The Heritage Monitoring Project reports on the theft of items from the Thulamela collection which recently came to light – months after the incident took place.

Questions are being asked within the heritage, museum and archaeological fraternity, why the theft of the Thulamela gold collection from the Kruger National Park early in December last year remains shrouded in secrecy. Museum insiders we spoke to say they are beginning to suspect that the theft has been swept under the carpet by authorities. They also allege that the reticence of the South African National Parks (SANParks) might be hampering the recovery of the items as it is standard practice to report heritage crimes to Interpol and the industry as soon as possible, as this has proven to aid in the recovery of objects quicker, while alerting other museums who may become future targets.

It also appears that SAPS and the Hawks are still no closer to making arrests despite strong suspicions that the theft was an inside job or at least aided by someone internally – as the artefacts were found missing from a locked display case of tempered glass that only employees of SANParks had keys to.

In mid-December last year, staff at the Stevenson-Hamilton Knowledge Resource Centre in Skukuza discovered a locked but partially empty glass display case. The case had contained gold coins and jewellery items from the royal graves of Thulamela – one of the so-called gold kingdoms. Other items from archaeological excavations at the site – including pottery as well as an important piece of blue Chinese porcelain – were left undisturbed.

The discovery of Thulamela in 1997 made news headlines around the world. The burial site of a man and a woman showed that Thulamela, a stone walled, hilltop site in the Soutpansberg range, formed part of the Great Zimbabwe culture and as at Mapungubwe, was home to a wealthy elite – suggestive of a complex and highly stratified society.

Carbon dating indicates that the site had been occupied between the thirteenth and seventeenth centuries. That Thulamela and Mapungubwe had much in common is clear. Tests conducted on gold artefacts from the two sites show that some of the gold items came from possibly the same source. These are the only two archaeological gold collections in South Africa.

After the discovery, the collection was moved to what is now the Ditsong National Museum of Cultural History in Pretoria. In 2013, Ditsong agreed to a loan request from SANParks to display the collection at the newly revamped and established Skukuza Museum. SANParks made a similar request to the University of Pretoria for the Mapungubwe collection with the intention of displaying the two gold collections side-by-side. It is believed that the university declined the request due to security concerns.

A private contractor was appointed by SANParks to transfer the items from Ditsong to Skukuza and to oversee the final design and construction of the exhibition.

Reports in the Beeld newspaper however suggest that experts now believe that standard conservation and museological practices were not followed by SANParks, and that Park authorities were negligent. What is further disturbing is that SANparks has not informed Ditsong of the theft, nor provided any details. According to staff at Ditsong, SANParks is the owner of the collection, however Ditsong remains the official repository in terms of a permit issued by the South African Heritage Resources Agency (SAHRA).

In another twist, Beeld further reports that SANParks management believes that not all of the gold artefacts from the collection actually made it from Ditsong to Skukuza. Ditsong however told the HMP that SANParks signed the loan agreement confirming that all artefacts arrived safely at the destination. According to them SANParks has never raised any issues regarding missing artefacts.

Should the SANParks allegations be true, this would raise serious concerns about conservation and collections management measures taken at the time of the loan transfer as it is standard practice for museum staff to be present at the packing and unpacking of collections to ensure that all items are properly recorded and accounted for. What is equally troubling is that professionals apparently advised SANParks against the simultaneous display of so many gold items from the collection.

Asked for comment as to why SANParks did not issue a statement regarding the theft, General Manager for Communications and Marketing at Kruger National Park, William Mabasa, says that the Park had hoped that the perpetrators would’ve been apprehended much sooner. According to Mr. Mabasa, there is no new information available in respect of police investigations underway.

SAHRA confirmed that SANParks only informed SAHRA about the theft in June this year – almost seven months after the fact. In terms of the National Heritage Resources Act, the theft of declared heritage objects must be reported to SAHRA immediately.

At the time of writing, requests for comments from SAPS and the Hawks had not been received.

The Heritage Monitoring Project has been contacted by museum experts from around the country concerned about the safety of museum collections. If you are aware of museum collections at risk, please submit your concerns to the endangered heritage campaign (click here for details). The deadline for submission is 31 August 2017.