The German churches of the central Natal region 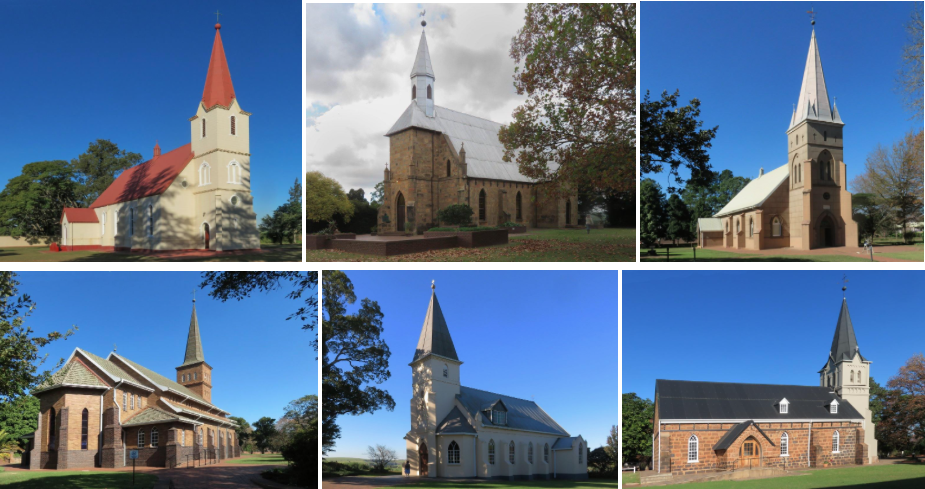 Settlers from Northern Germany came into Natal in two main groups. The first to arrive was a group contracted to the Natal Cotton Company. This was a company established by Jonas Bergtheil, who had come from Germany in 1843 scouting for business opportunities in the region. He found one when he noticed cotton being grown. He set up the company and placed an advertisement in newspapers in the Kingdom of Hannover asking for farmers with families. 188 arrived in 1848 and they started farming in an area they called Neu Deutschland (today it is New Germany near Pinetown).

The other major influx of people was through The Hermannsburg Mission Society. From 1854 the mission sent missionaries, tradesmen and farmers to Natal to set up mission stations. What happened in many cases was that the mission ran out of money and the farmers and tradespeople had to earn an income from other sources, mainly farming.

What they all had in common was that they were of the German Lutheran confession. It was thus that they established their own congregations wherever there were sufficient numbers.

The contract with the Natal Cotton Company in New Germany was for 5 years. Many of the farmers did not renew their contracts and preferred to move further inland to set up their own farming ventures. Farmers from Hermannsburg joined them and by 1858 the numbers were strong enough to form a congregation of their own.

In the early years, all they had was a reed hut serving as a church and school. This was followed by a chapel built from mud bricks. As prosperity improved, a stone church was completed in 1868 using dressed rocks available locally. The church did not have a tower initially, just a small one on top of the roof. The tower seen in the picture below was added in 1885. 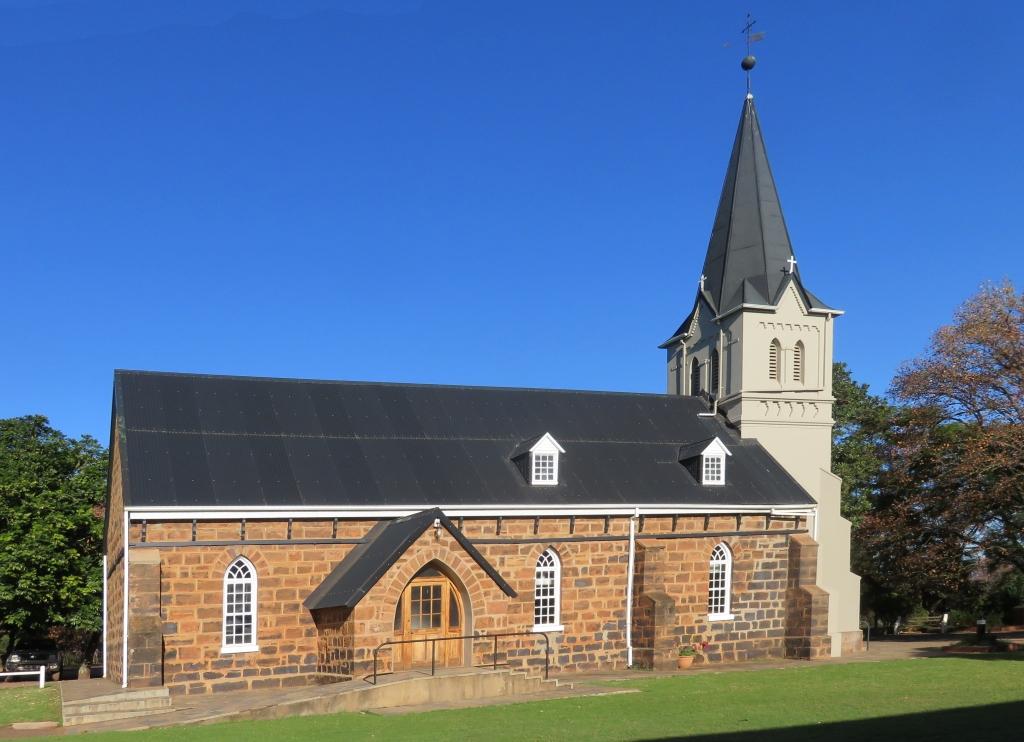 The church is now part of a complex just outside the town of New Hannover containing a church, a school (English medium, it used to be the school for the German children), sports fields, a preschool, staff housing, an old age home, a retirement village and a cemetery. 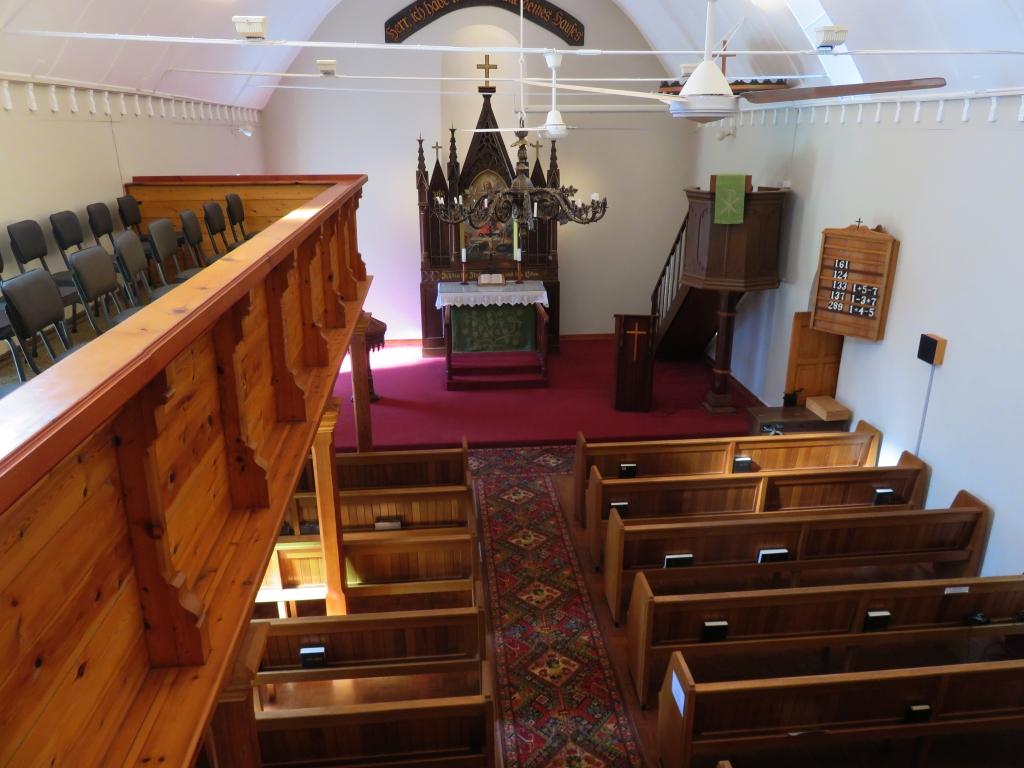 There are two German Lutheran churches in Wartburg. Why two? Well in 1892 there was a split in the Lutheran church. Space does not allow me to explain the full complexity of what happened. It was caused by nationalism and church politics in far away Germany with the initial trigger being the annexation of the Kingdom of Hannover by Prussia in 1866. The separation has prevailed to the present day with different Lutheran congregations belonging to FELSISA or ELCSA, two different synods.

A start with church building was made in 1881 when a few members of the New Hannover church expressed the desire to have their own church in the area because of the distance they had to travel to attend services. The first church to be built was the Kirchdorf church, which was completed 1882.

The foundation stone from this church has been preserved as a monument near the present church. The inscription reads 'Foundation stone of the first church of Kirchdorf. It served the community from 1882 to 1952 as church and from 1952 to 1976 as community hall'. With time it became too small and had to be extended. Ultimately the building was not able to hold the congregation and a completely new church was built in 1952. 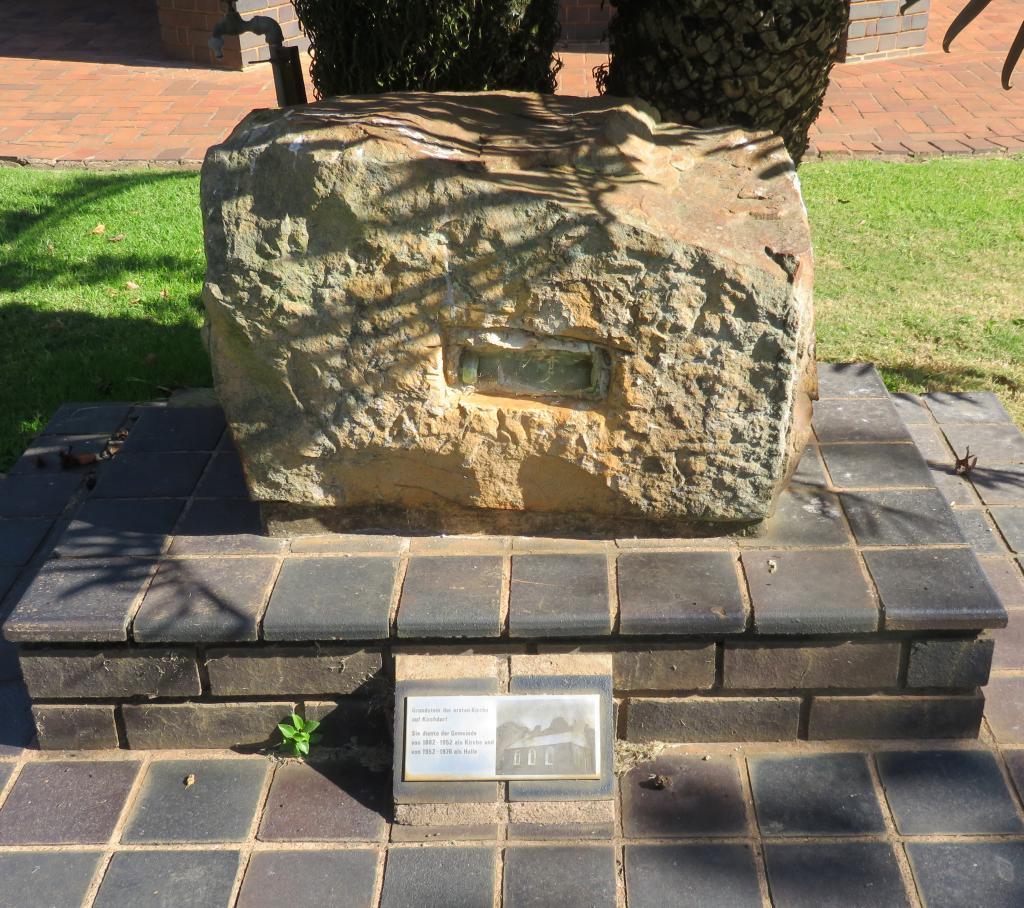 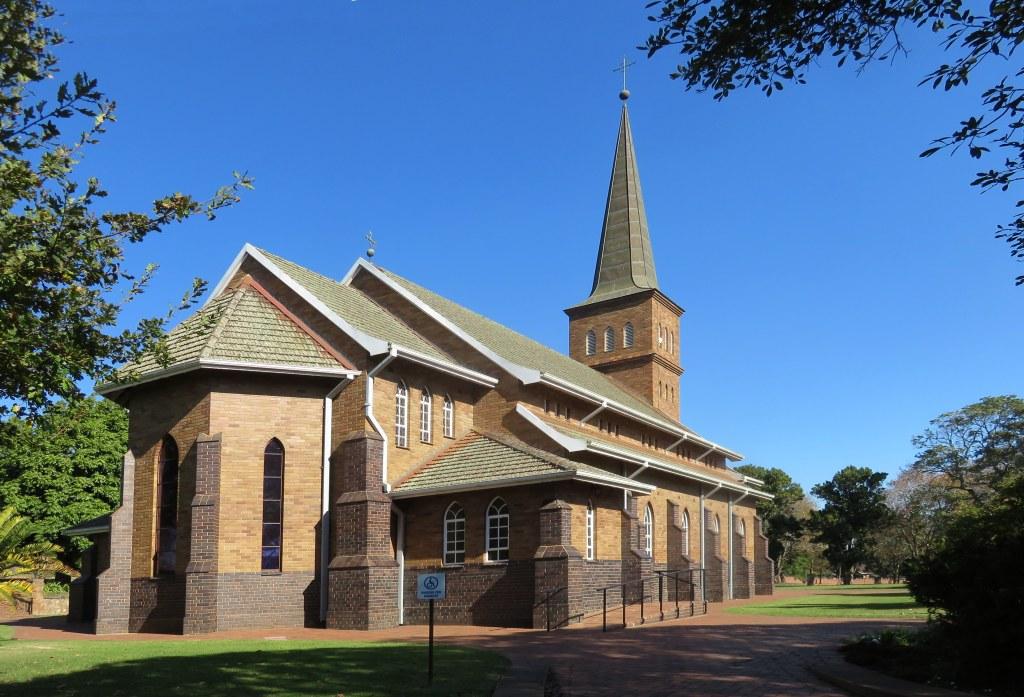 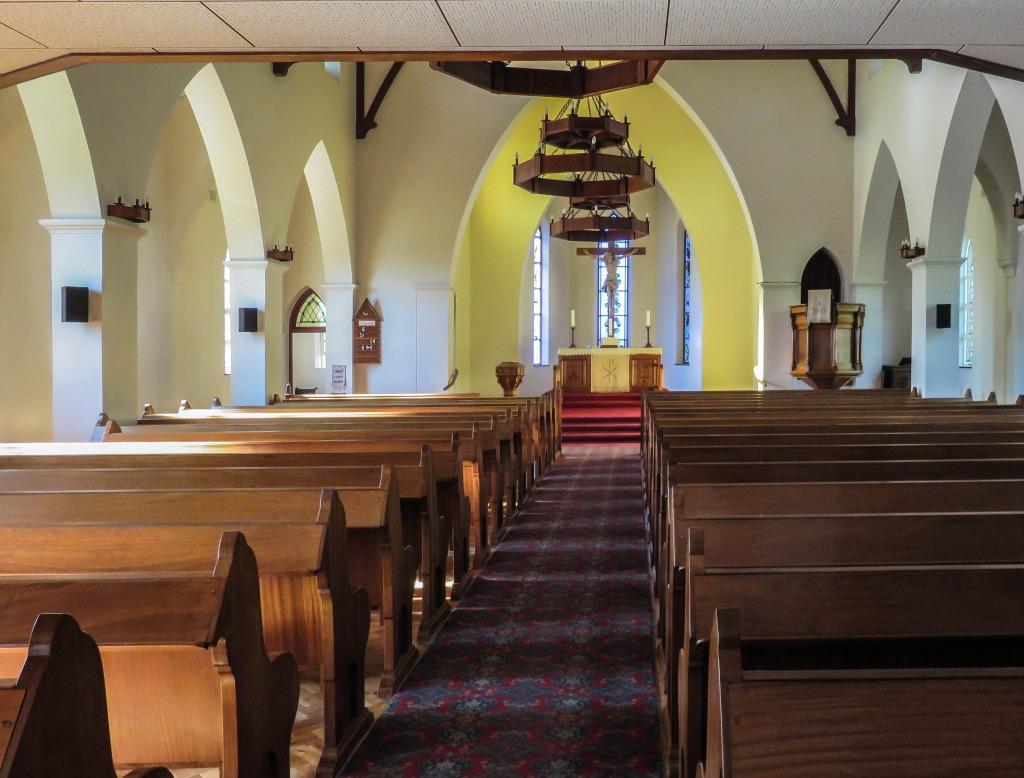 The Wartburg church congregation arose as a result of the split in 1892. A minority of the congregation voted to stay with the Hermannsburg mission and being the minority they had to find new quarters.  A piece of land was acquired and a corrugated-iron building erected which served as church and school.  A cemetery was laid out on the same property.

By 1905 the congregation was ready to build a proper stone church. It was to be large enough to seat 300. The inauguration took place on the 27 June 1907. Over time some modifications were made but in general the church still stands as it was erected more then a 100 years ago.

My picture of the inside is somewhat spoiled by the scaffold but I don't mind at all as it shows that our heritage continues to be preserved. 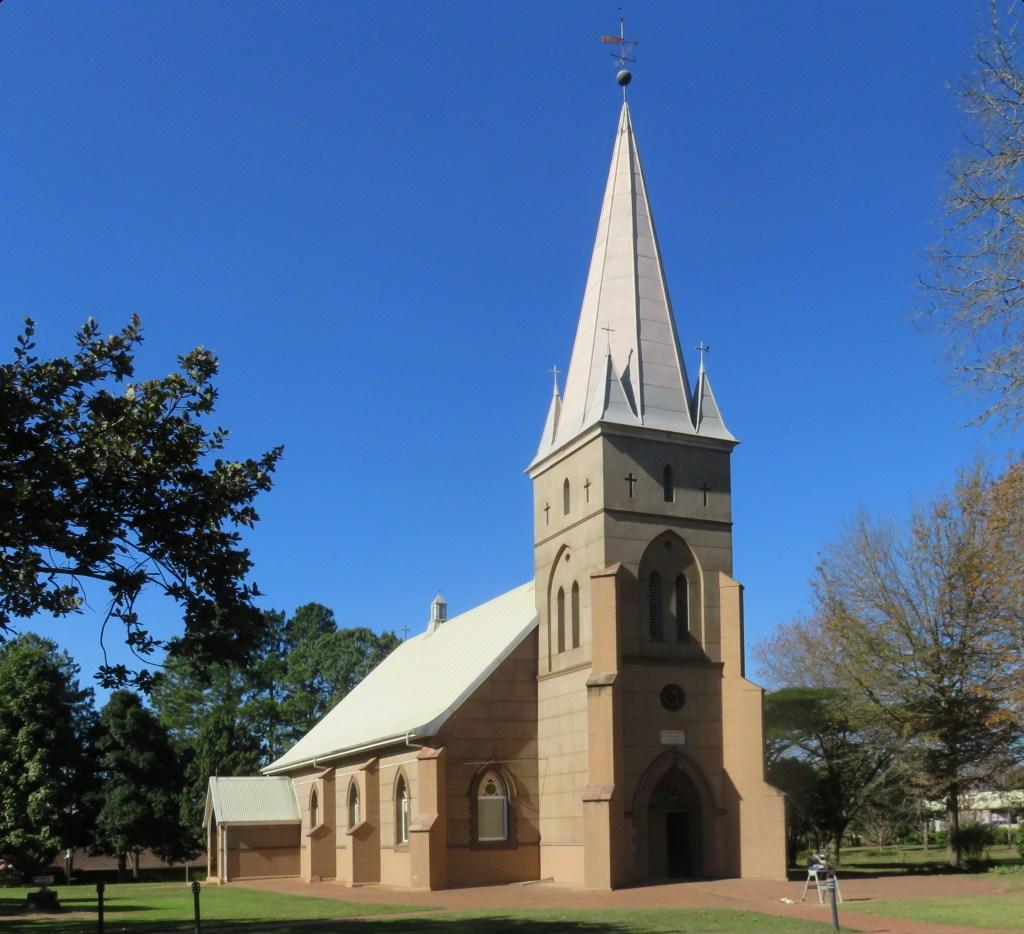 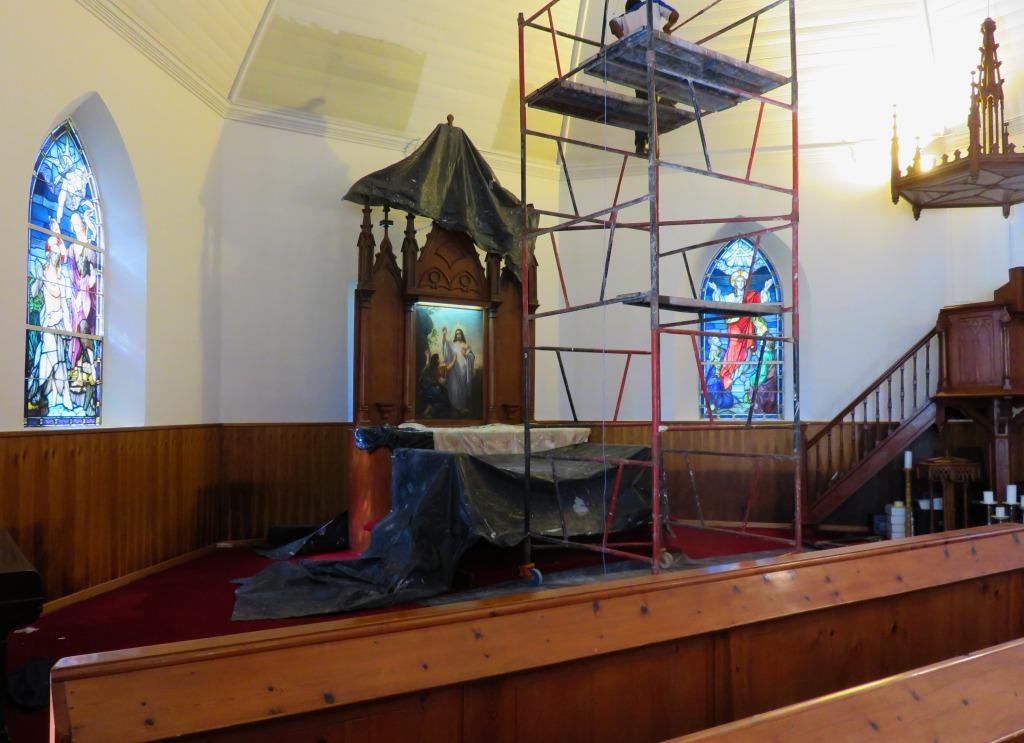 Inside the Wartburg Church (Horst Müller)

Harburg had its beginning around 1885 when some German farmers who were members of the Kirchdorf congregation felt that the journey to get to the services was too far. They wished to remain part of the congregation but have services locally. For this benefit they paid £3 per family per year. By 1891 numbers had increased sufficiently to have their own congregation with their own minister. The name adopted was Harburg. The present church was inaugurated in 1897. 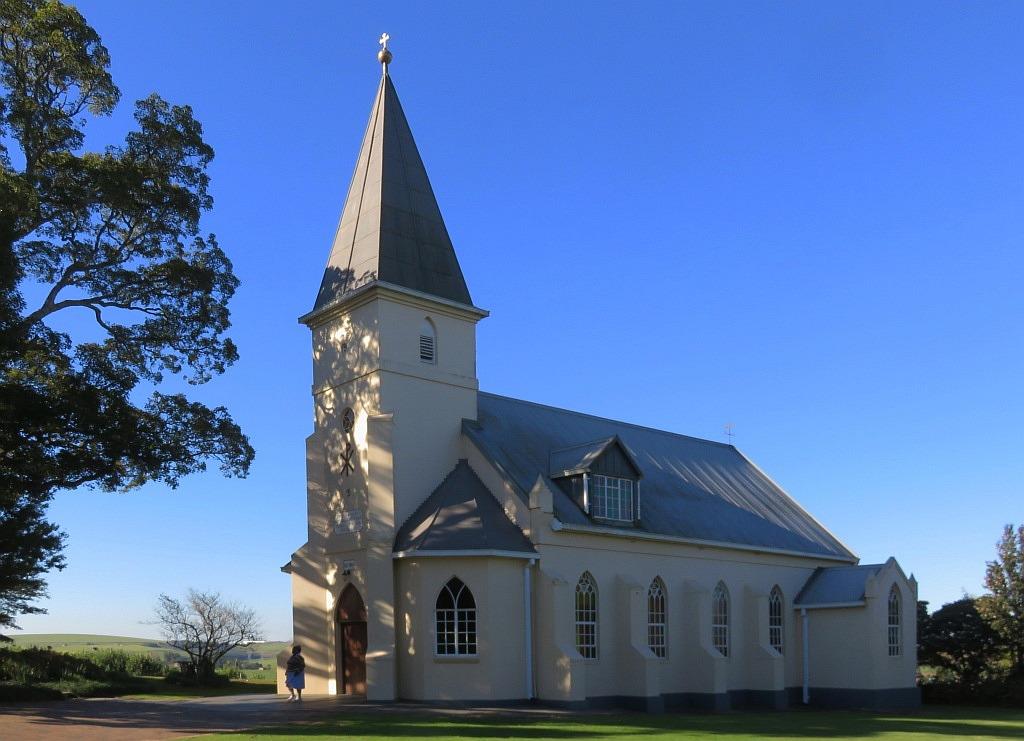 The beginning of Lilienthal was very similar to that of Harburg. The distance to church, in this case to Harburg, being the driving force.

The German Lutheran congregation of Lilienthal came into being in 1898. A piece of ground was donated by D. Schütze to erect a church and lay out a cemetery. A chapel was inaugurated in 1899. Initially it served as church and school, the pastor also being the teacher. A medium sized church, the Johannes Kirche, shown in the picture below, was built in 1926. The church is not in use today, but is still being maintained. The congregation has merged with those of Harburg, New Hannover and Kirchdorf. 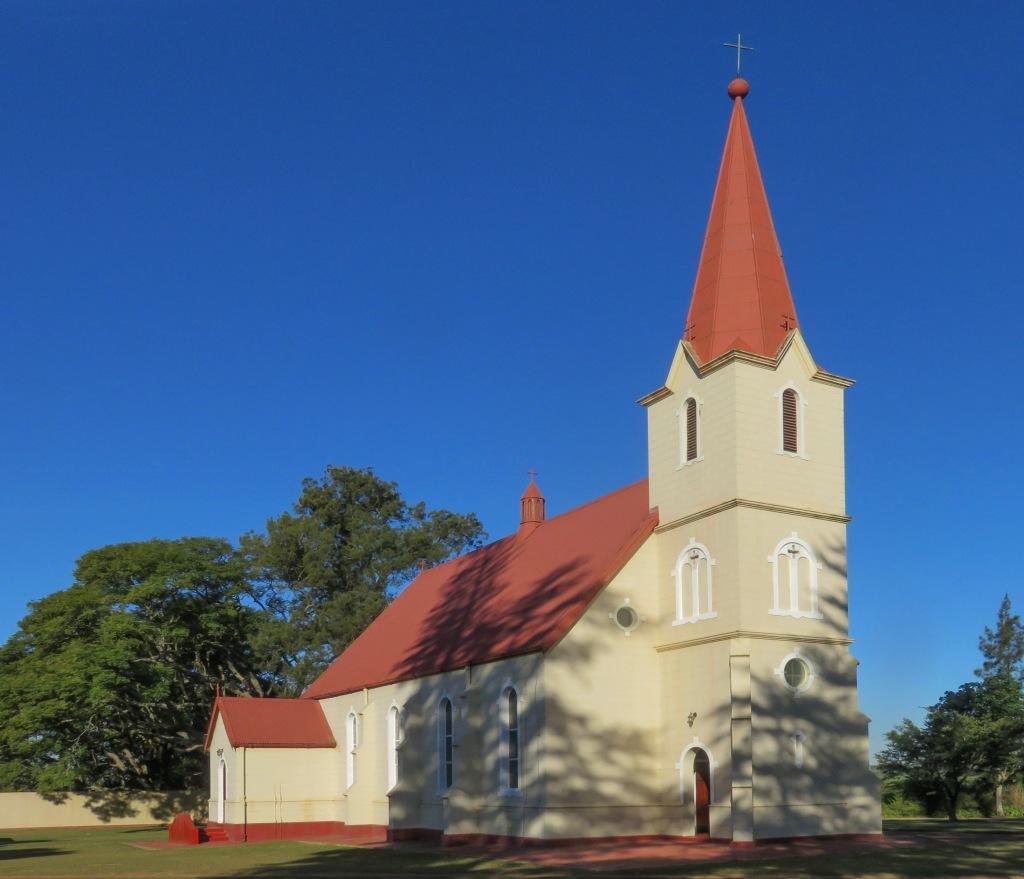 Hermannsburg was and is the centre of the Hermannsburg Mission Society in South Africa. In the grounds one finds a school, school hostels, a sports field, a very interesting museum, staff housing, a church and two cemeteries.

The mission station had its beginnings in 1854 when the first group of missionaries arrived and purchased the farm Perseverance from a Mr. Berends to be used as a central station from which to send missionaries into Zululand. The first major construction was the big house which contained a room to be used as a chapel. This 'big house' is now the museum.

A chapel was erected in 1860, but with growing numbers this was soon too small so in 1868 the foundation stone for a big sandstone church was laid. The building was consecrated on 23 February 1870. This is the church still in use today. 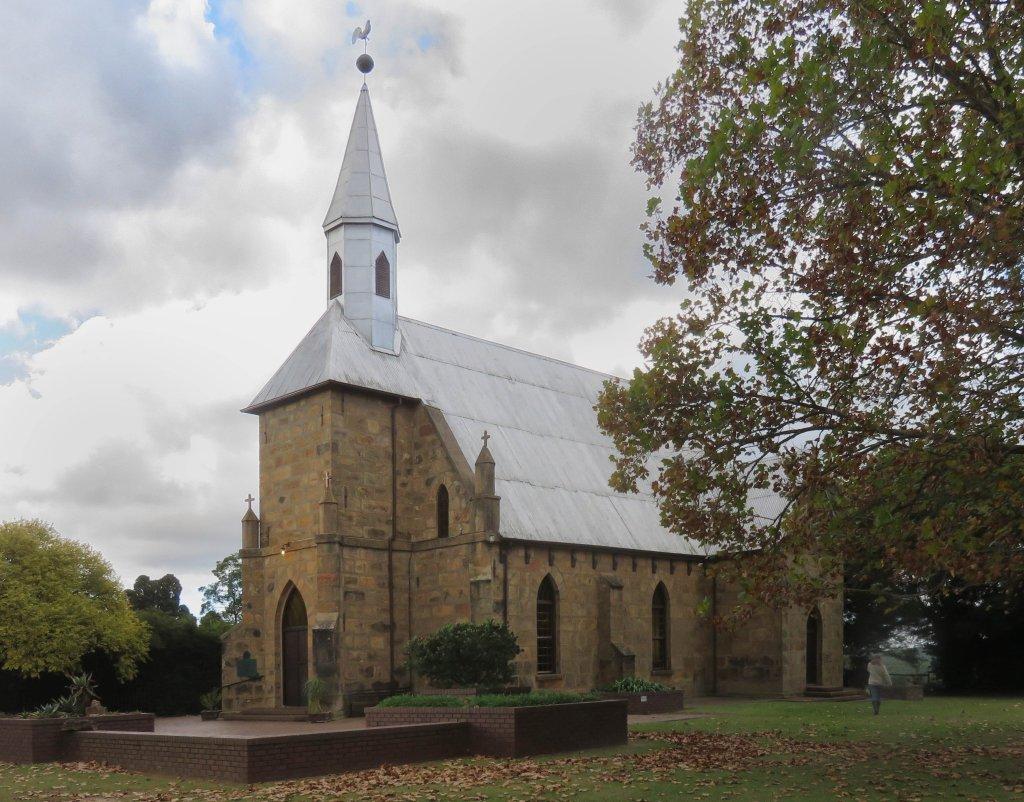 It was used for both language groups, a service in Zulu and a service in German. That was until 1925 when a separate Zulu church was built.

The building is in a neo-Gothic style, but more than that it is very typical of churches in the north-west area of Germany. The shape of the tower is striking. I have not been able to find out who designed it. The interior is kept in the plain Lutheran style. 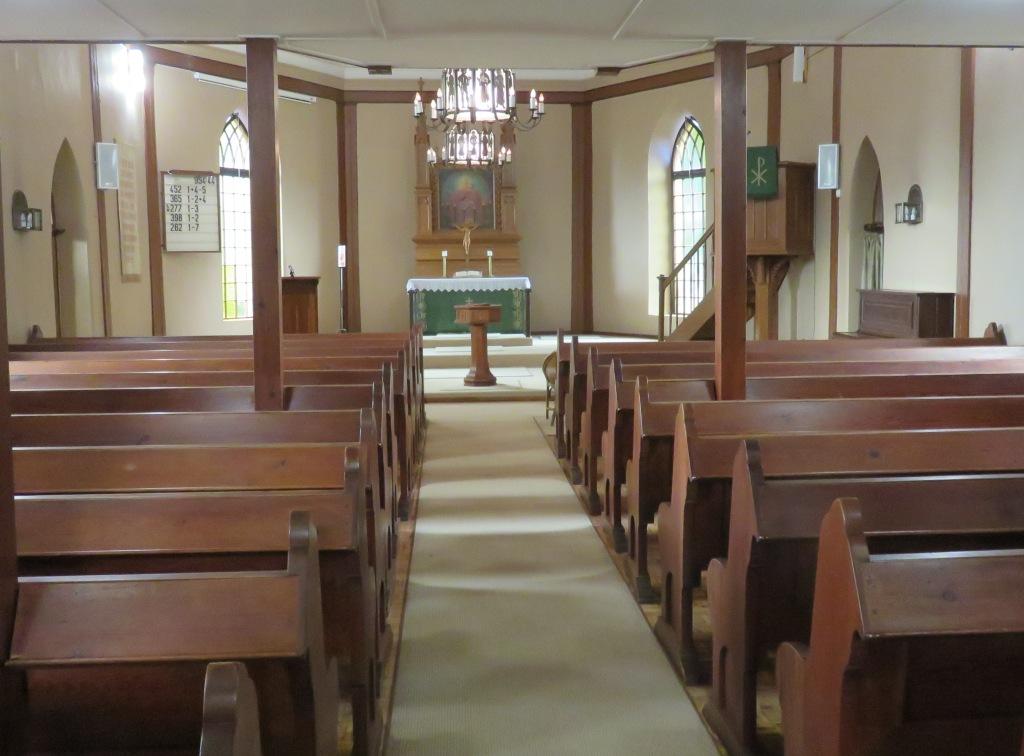 Inside the Hermannsburg Church (Horst Müller)

Of interest is the front door lock which hasn't been changed since it was made by the blacksmith in Hermannsburg at the time (it looks as though some repairs have been carried out over the years). 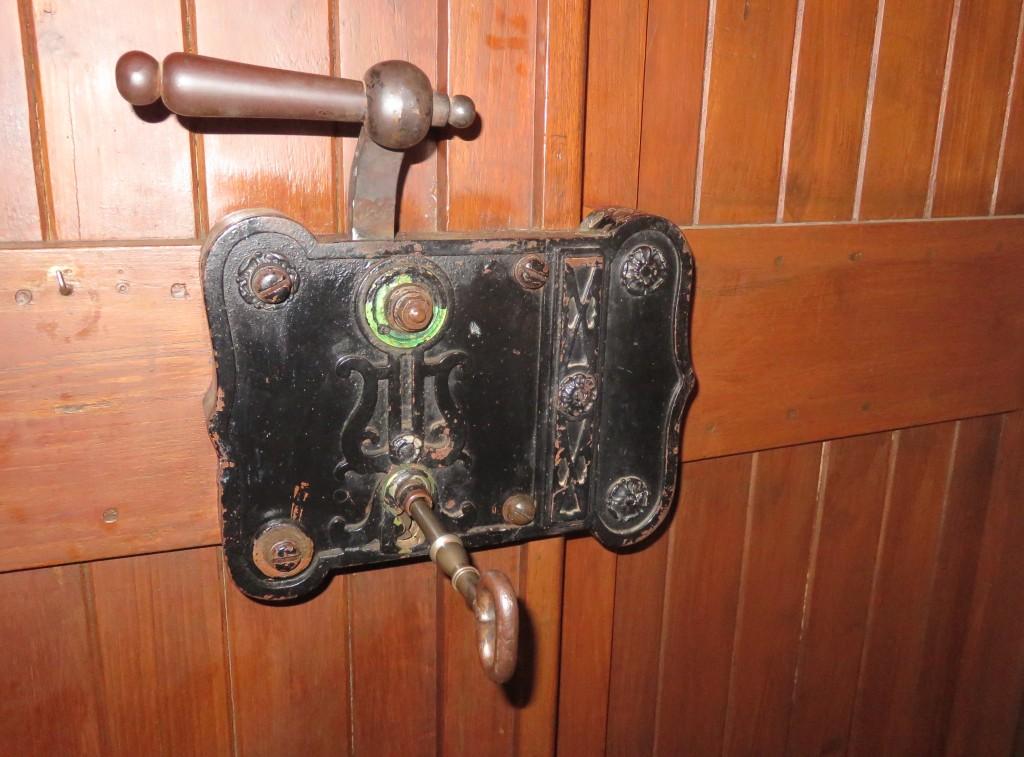 This church is a bit more difficult to find because it is off the 'beaten track' (see coordinates below for assistance). The spelling should be Müden, named after a town in Germany but with time it lost its Umlaut and is now shown on the maps as Muden.

The history of Müden started with Heinrich Röttcher, a missionary with the Hermannsburg Mission Society sent out from Germany in 1862. He was posted to Entembeni on the Mooi River. Entembeni or Ethembeni as it is spelled now on Google Earth, is situated about 20 km by road going north from Müden.

The event leading to the establishment of Müden was when Heinrich Röttcher bought the farm Nooitgedacht in 1871 which straddled the Mooi River. It was 6000 acres in extent and cost him £1085. The mission society was not interested in his purchase initially but that changed when he offered to set up a new mission station on the farm (this was granted in 1876). With much enthusiasm a church was built and irrigation canals dug which made arable land available. The society at this time saw the potential and a contract was drawn up by which Heinrich would release 4423 acres to the society for an amount of £1000, the remaining 1587 acres he kept for his family. It was cut up and portions rented out to other German colonists. This way enough German Lutherans accumulated so that a congregation could be formed.

In Reference 2 we read that a church was built by the congregation in 1877. I am not sure if this is the church in the picture below. Further research is needed. The church is built in the typical style that we see in other Lutheran churches in the area.

The building has not been in use for some years now due to dwindling numbers but it is still being maintained by the Röttcher Trust and is used occasionally for special events. 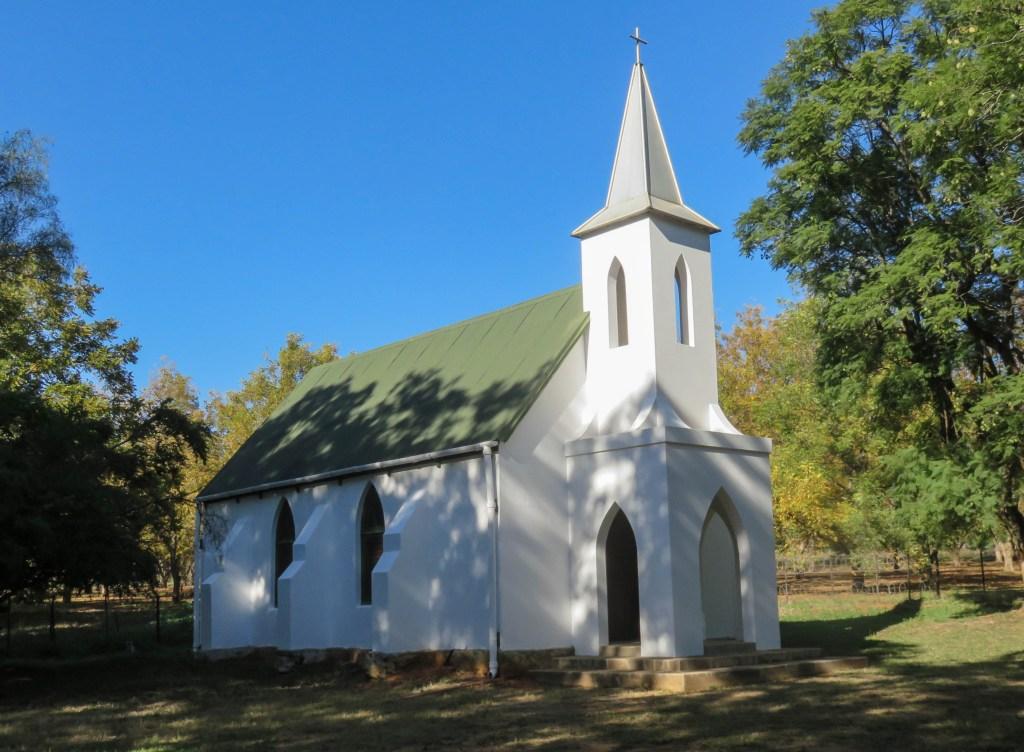 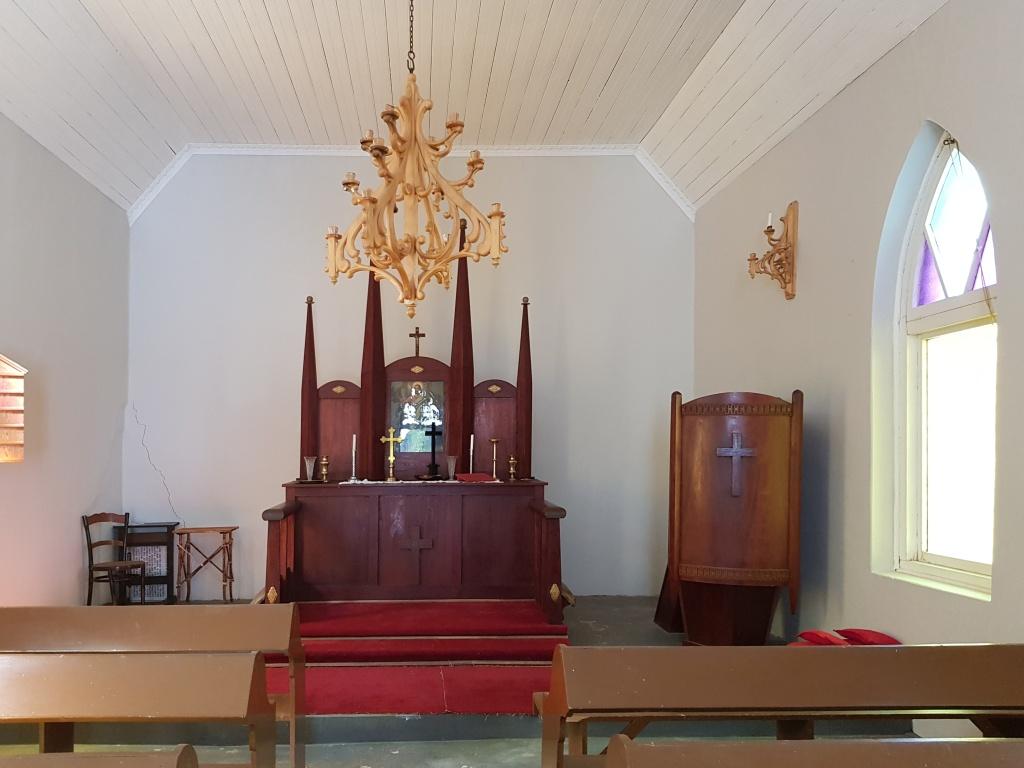