In researching this article, it became evident that hardly any photographer active during the Anglo-Zulu War (AZW) period has been written about. In the majority of sources consulted, photographers also generally have not been acknowledged where their work was used – be that as photographers out in the field or studio based photographers. This may be a simple matter of us not being aware of who the photographers were in the majority of instances. AZW photographic activity is therefore still a field with much research opportunities – this almost 140 years after the event.

Although hand-held cameras of the late 1870’s became more widely used in South Africa, they generally would not have ventured into Zululand by then.

Fewer soldiers would also have carried cameras during the AZW compared to the Anglo-Boer war some 20 years later. Photography during the 1870’s was a slow and difficult process appealing mainly to the professional photographer.

It was also impossible to take action photographs of any battle in progress resulting in the images available showing posed groups or views of historical sites taken some months later.

A large portion of images produced during the Anglo-Boer war would have been taken by soldiers and citizens alike, whereas the majority of images originating from the AZW period would have been produced by the more professionally inclined field and studio photographers. The AZW also took place over a much shorter period compared to the Anglo-Boer war, resulting in fewer images being produced compared to the latter.

During the entire campaign, some 8800+ casualties were recorded on both sides. The British force of around 14 000 men, during their first encounter, marched into Zululand to attack the Zulus on 22 January 1879 when they unexpectedly met up with the 30 000 strong Zulu army at Isandlwana. The British lost around 1 300 men in this disastrous engagement.

Photographs taken of the battlefields afterwards show burnt-out waggons and the bleached skeletons of the soldiers before they were buried.

This article focuses mainly on some of the personalities involved in this conflict, photographed shortly before or after the war. All the images form part of the authors photographic research collection.

Original images taken of Zulu leaders or even Zulu warriors during this conflict are exceptionally rare. It may therefore make this article seem biased from a Eurocentric perspective in that the images included are mainly of British leaders or soldiers.

British soldiers generally had themselves photographed before or after the war, whereas the concept of having oneself photographed would have been a foreign concept to the Zulu nation.

It also begs the question, can we as South African’s argue that the AZW forms part of our heritage. The author argues that it forms an integral part of our cultural heritage for the following reasons (amongst other):

The majority of the images presented in this article are in carte-de-visite format (the smaller photographic format in use between the 1860’s and 1880), in that the larger format Cabinet Card photographs did not come into use in South Africa until around 1880.

Surviving photographs taken in the field are also exceptionally scarce, resulting in all the images included in this article being studio based photographs (with the exception of the Dabulamanzi image  – which was taken after the war). 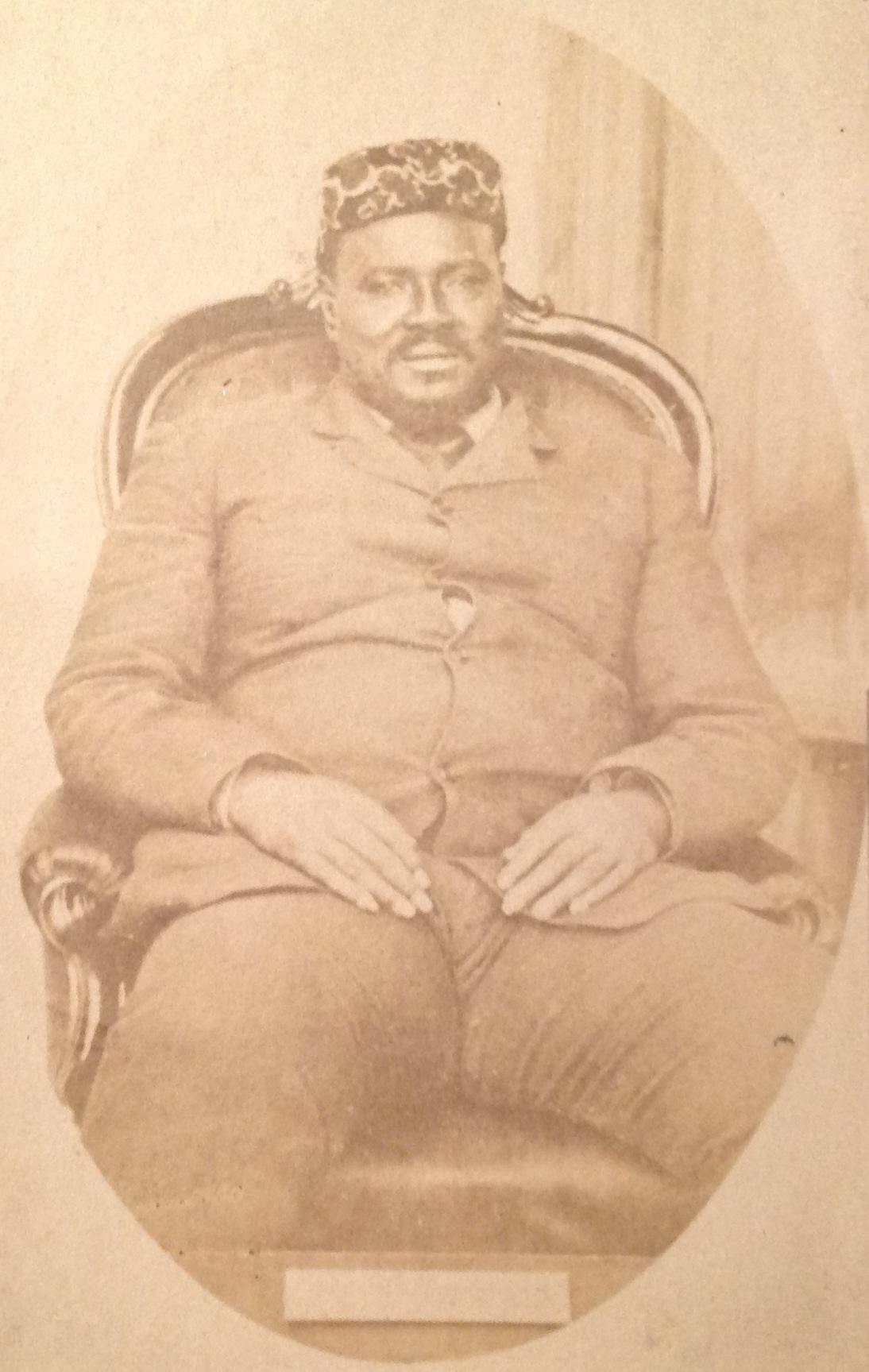 Carte-de-Visite format photograph by an unknown Cape Town based photographer. May have been taken by Crewes. 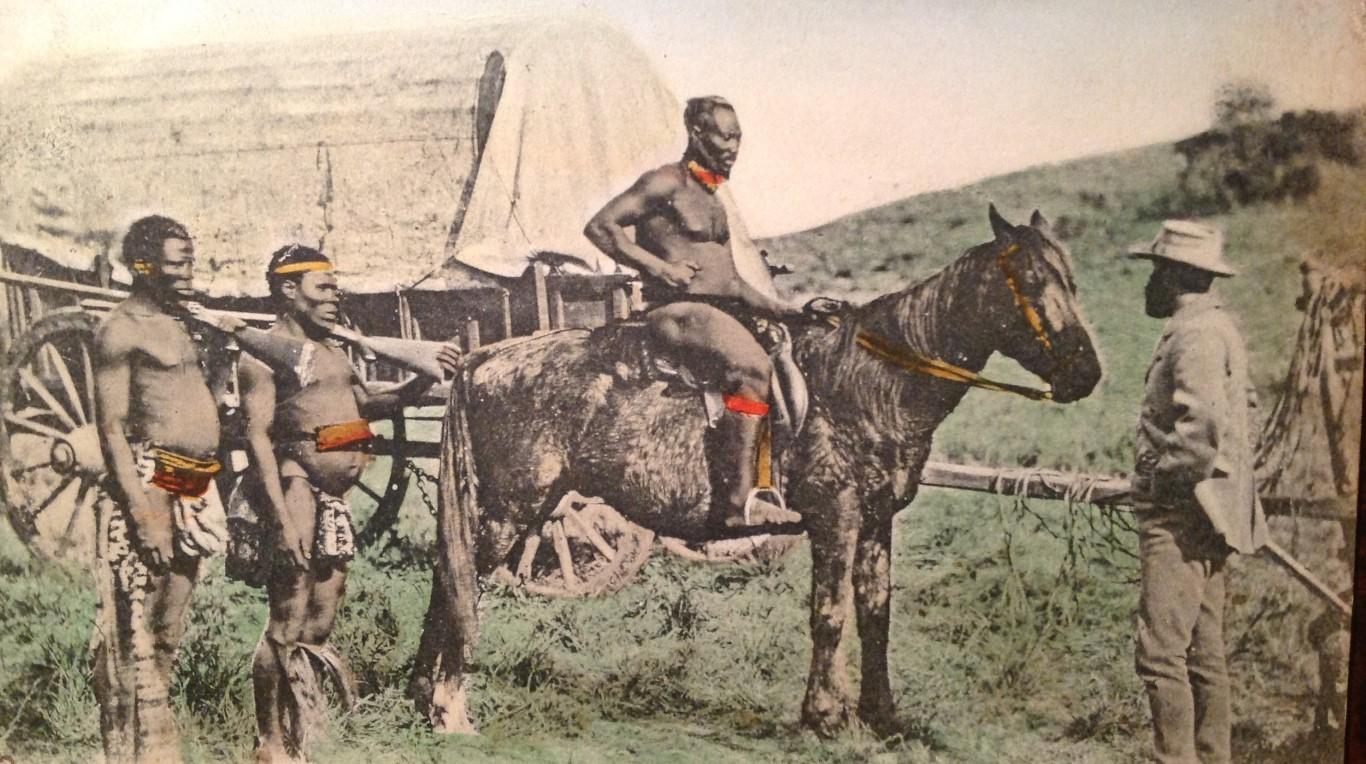 Picture postcard showing Dabulamanzi on horseback. The card incorrectly describes it to be Cetshwayo. It is further suggested that it is Dunn on the right. The card was posted during 1904, but the image may well have been taken a number of years earlier. Card published by Sallo Epstein. 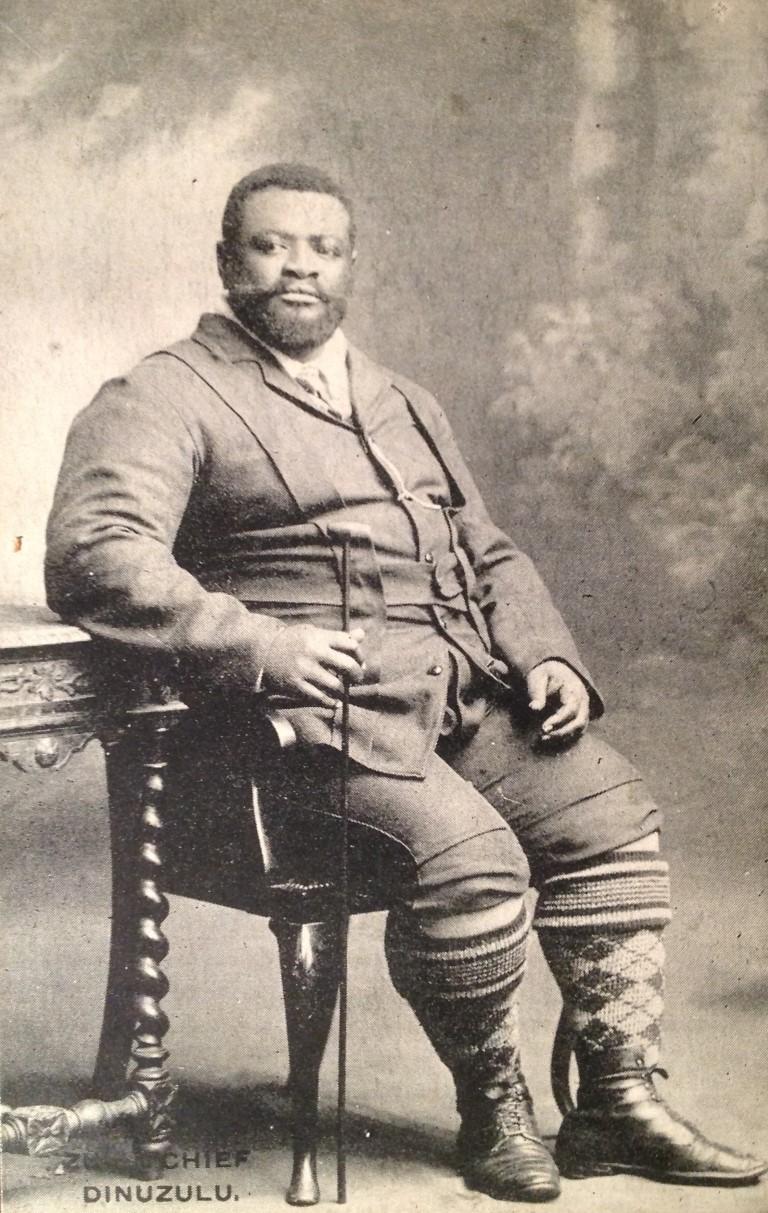 Dunn – Taken at Crewes Photographic studio - Circa 1880 via Hardijzer.jpg 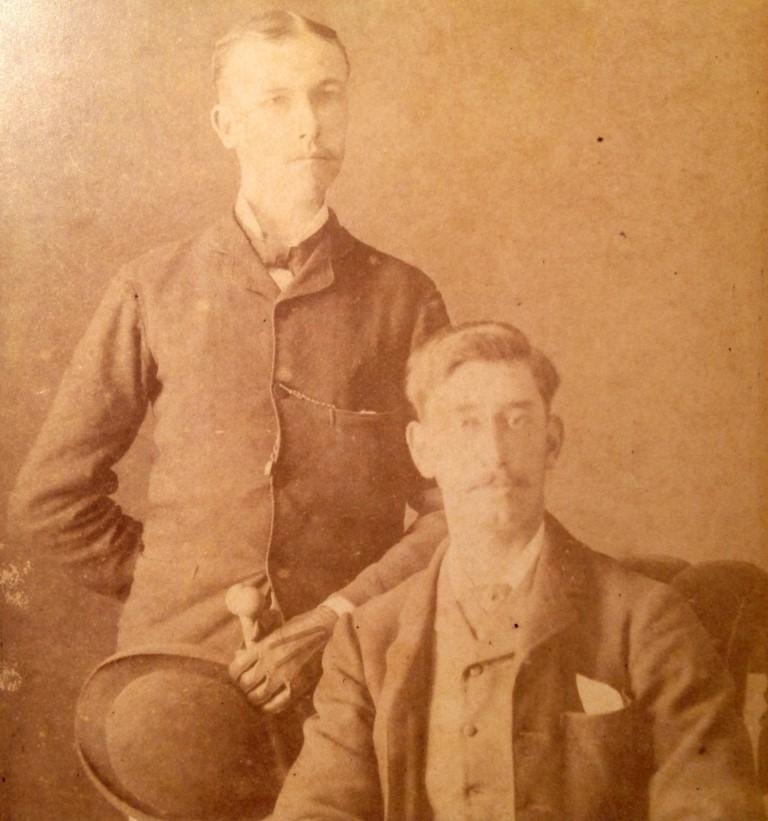 Prince Louis Napoleon, commonly referred to as the Prince Imperial, was the only son of the exiled Emperor of France (Napoleon III) and the great-nephew of Napoleon Bonaparte. He completed his military training in Britain during 1875. Described as having an excitable and restless nature, he was viewed as a liability to those in charge of his safety. On 1 June 1879, the world received with shock the news of the death of a 22-year old British officer – The Price Imperial. He was assegaied 17 times.

Prince Imperial – Image of him in uniform was taken by Grahamstown based CJ Aldham (Circa 1879).jpg 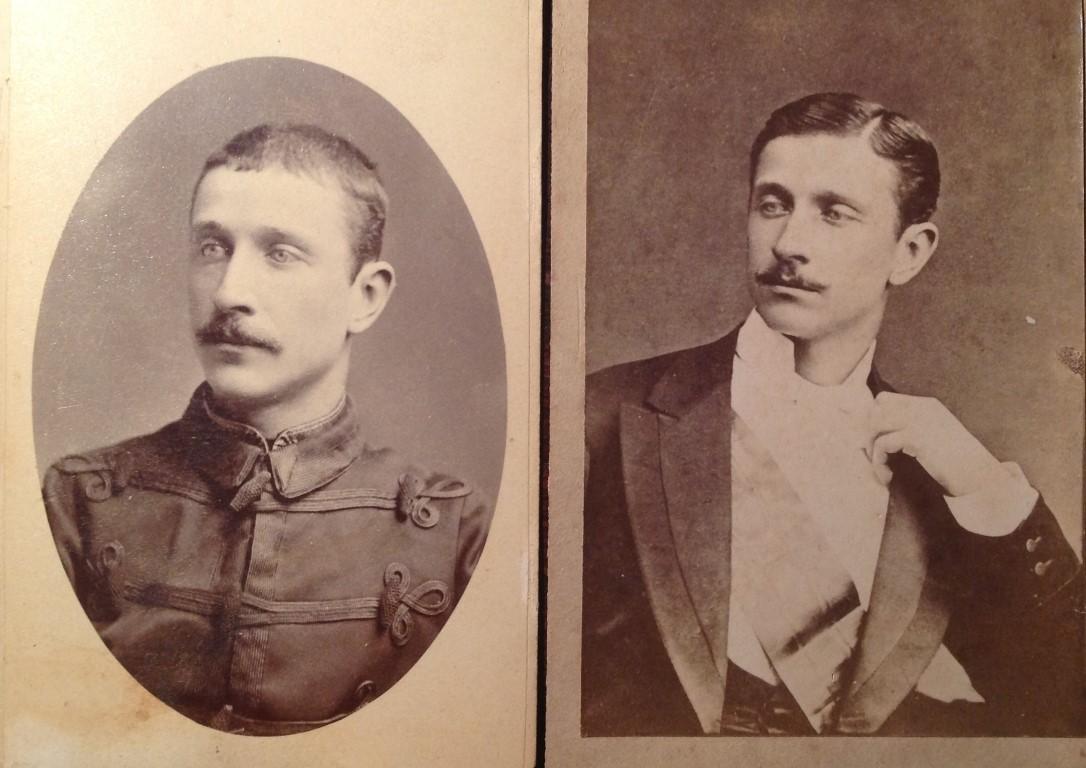 Prince Imperial – Image of him in uniform was taken by Grahamstown based CJ Aldham (Circa 1879). Photographer of image on right unknown (Circa 1878). 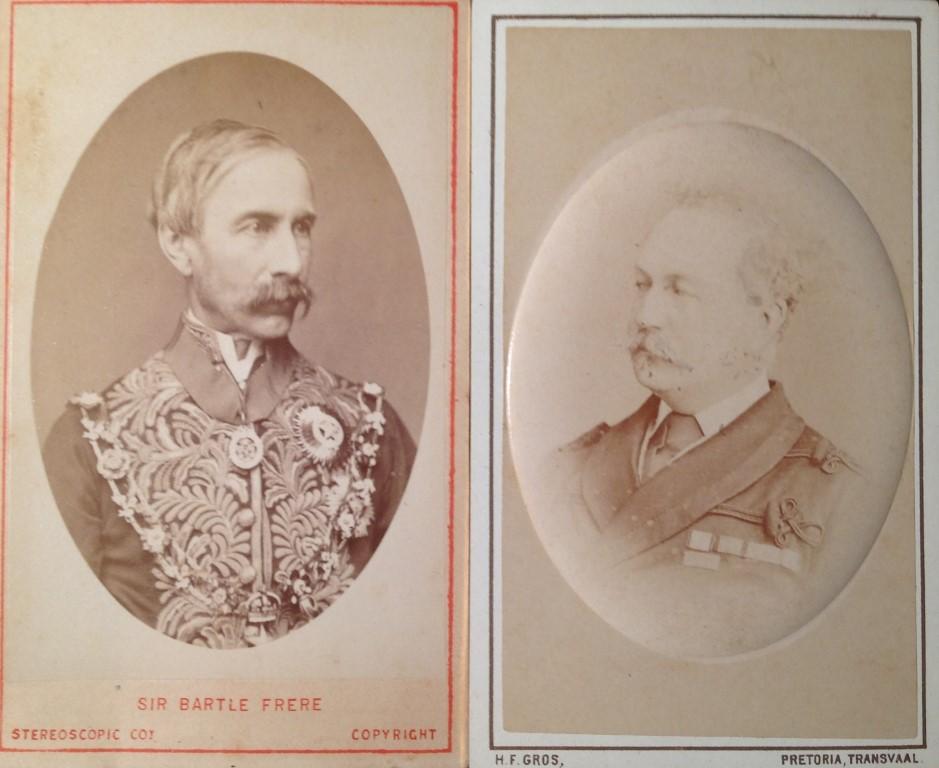 Officers in the field

All the officers listed below formed part of the 1st Battalion of the 24th regiment, commonly referred to as the 1/24th. They were all killed in action in what became known as “the last stand” at Isandlwana.

Considering that these photographs were taken in Cape Town, it is safe to assume that some of the officers served in the Cape Frontier war of 1878, prior to them taking up their positions in Zululand a year down the line.

On left in uniform is Atkinson and on the right Porteous - Crewes and Son via Carol Hardijzer.jpg 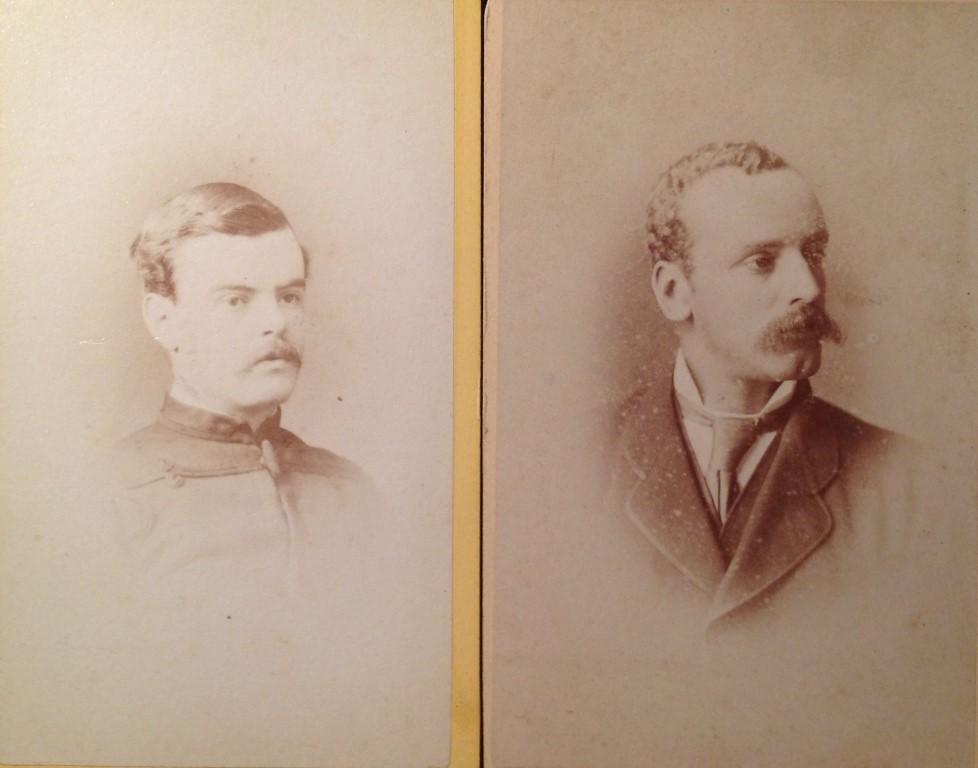 On left is Hodson and on the right is Daly - Crewes and Son via Carol Hardijzer.jpg 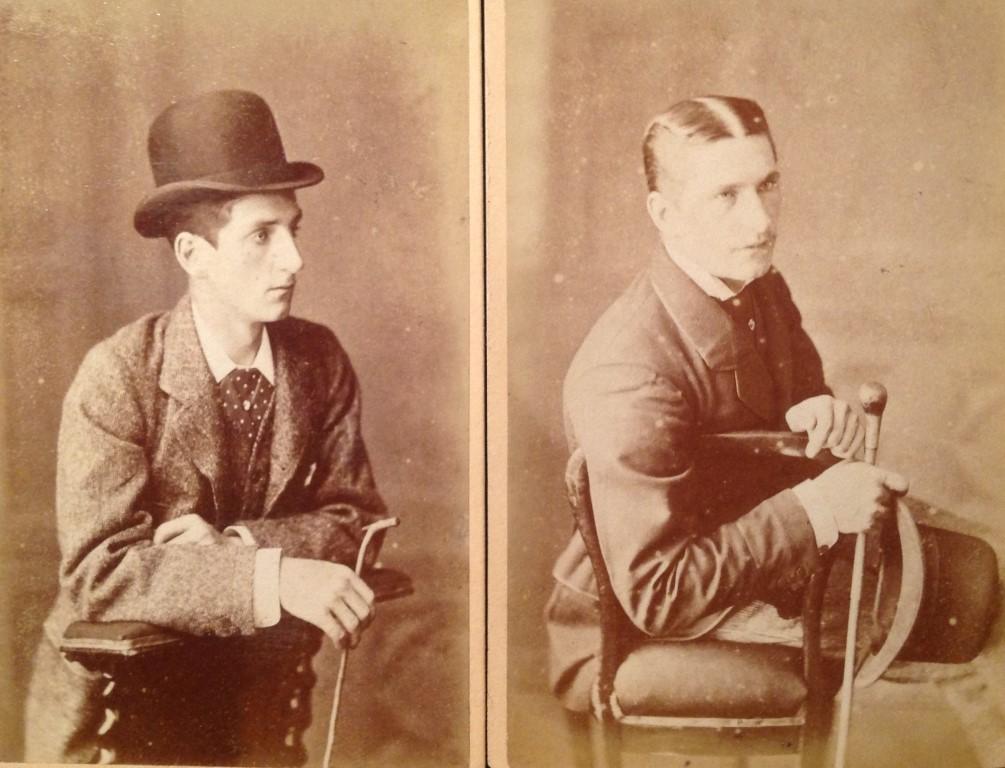 Coghill and Anstey - Crewes and Son via Carol Hardijzer.jpg 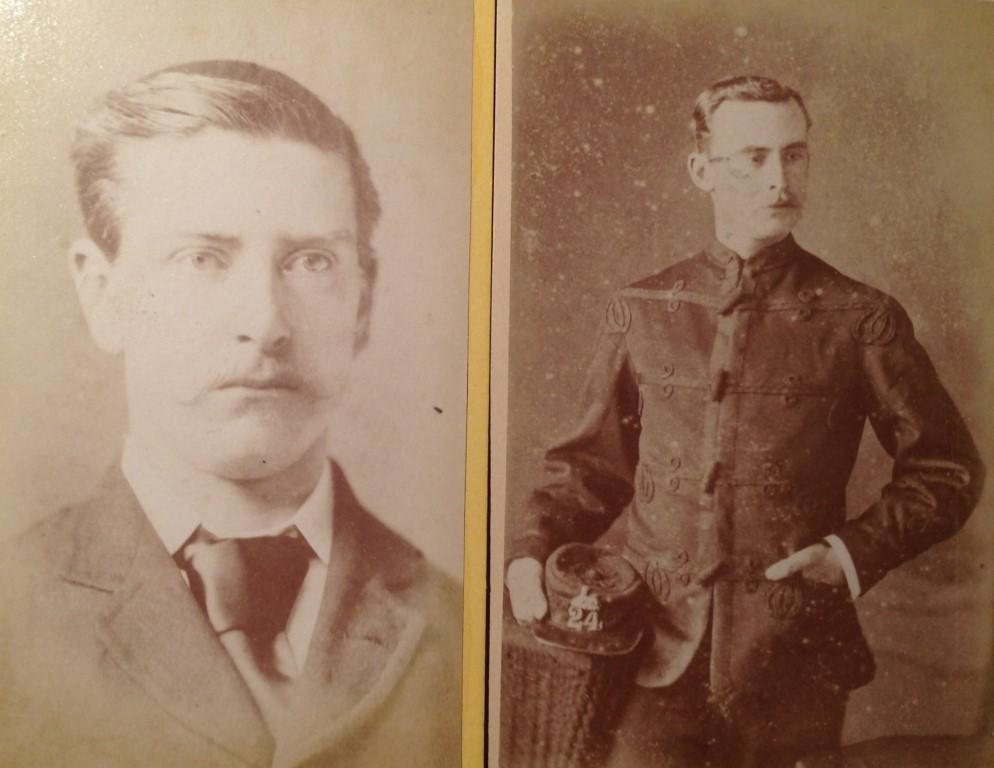 All the photographs of the officers above were produced by Cape Town based Crewes & Son. Crewes, who later went into partnership with van Laun, was also a jeweller and watchmaker.

There may be many AZW images still in circulation, but have become “lost” due to names of the sitter not being recorded or soldiers being photographed in civilian clothing which makes identification even more challenging. Four of the images of the officers above may have become lost if their names were not recorded on the back by the photographer Crewes. 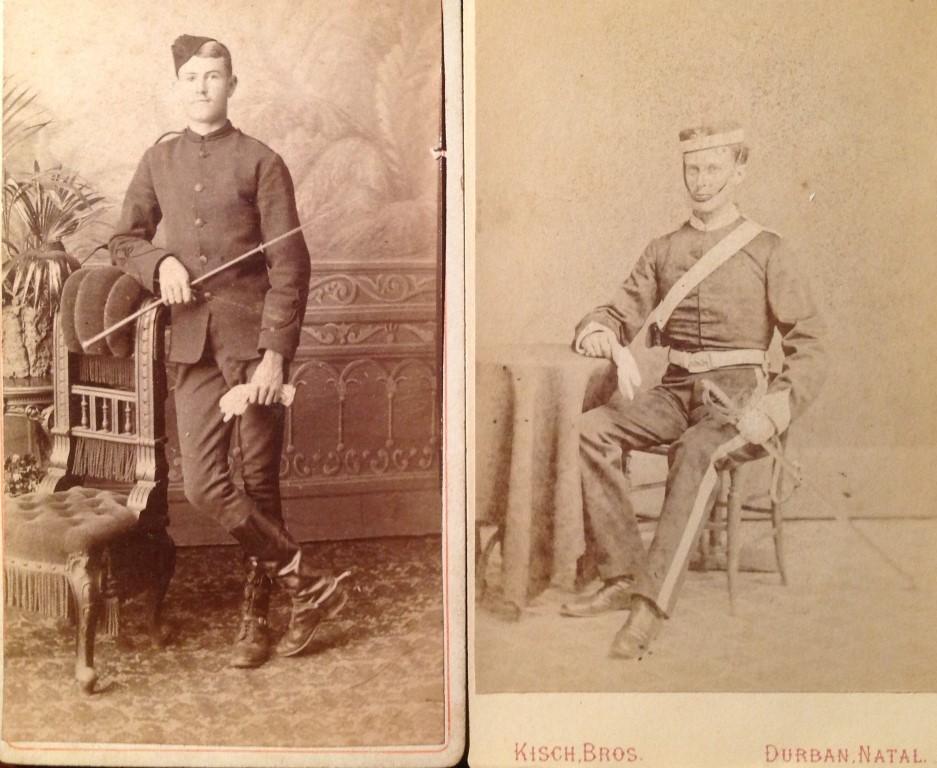 Noncommissioned officers. Carte-de-Visite photograph on left by Natal Stereo and Photographic company – GT Ferneyhough – Pietermaritzburg and on right a Carte-de-visite photograph by Kisch brothers based in Durban (Both Circa 1879)

Photographic commercialisation of the war

Various locally based photographers saw a commercial opportunity and positioned themselves in order to capture images of especially the British soldiers. Photographers that stood out were Charles F. Crewes & Sons (based in Cape Town), Kisch brothers (based in Durban), Ferneyhough (based in Pietermaritzburg) & CJ Aldham (based in Grahamstown). 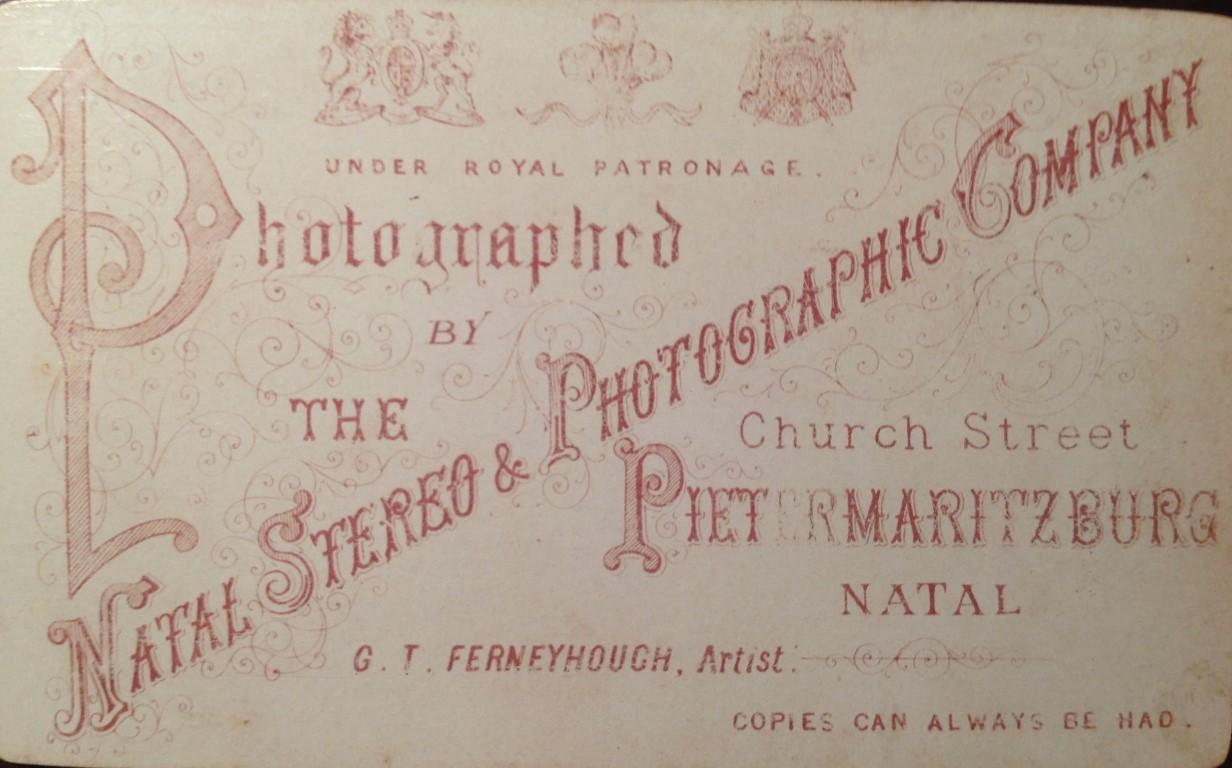 Crewes, seemingly managed to commercialise this event the best, as photographs produced by his studio were made available to the general population to purchase, especially those of the British officers who died during the conflict. It is not clear as to whether all these images were actually taken by himself at the Cape Town studio prior to the war, or whether he managed to reproduce images that were taken abroad before. The author however suggests that they were all taken in Cape Town. It has also been suggested that Crewes was on the SS Natal – the ship Cetshwayo was on, whilst travelling to England.

Interestingly, Crewes used pre-printed carte-de-visite stock of two of Cape Town’s better known photographers during that era, namely Samuel Barnard who operated The Cape Town Photographic Gallery from 37 Adderley Street and Wilhelm Hermann whose studio was based at 2 Roeland Street. This was not an all to uncommon activity amongst photographers. When a photographer ran out of card stock (carton backing on which photographs were pasted), they would purchase some stock from their competitors. These cards were largely printed in, and shipped from Europe during those years. Crewes simply pasted the name of the officers over Barnard’s or Hermann’s names and changed the address on Barnard’s cards from 37 to 42 Adderley street. 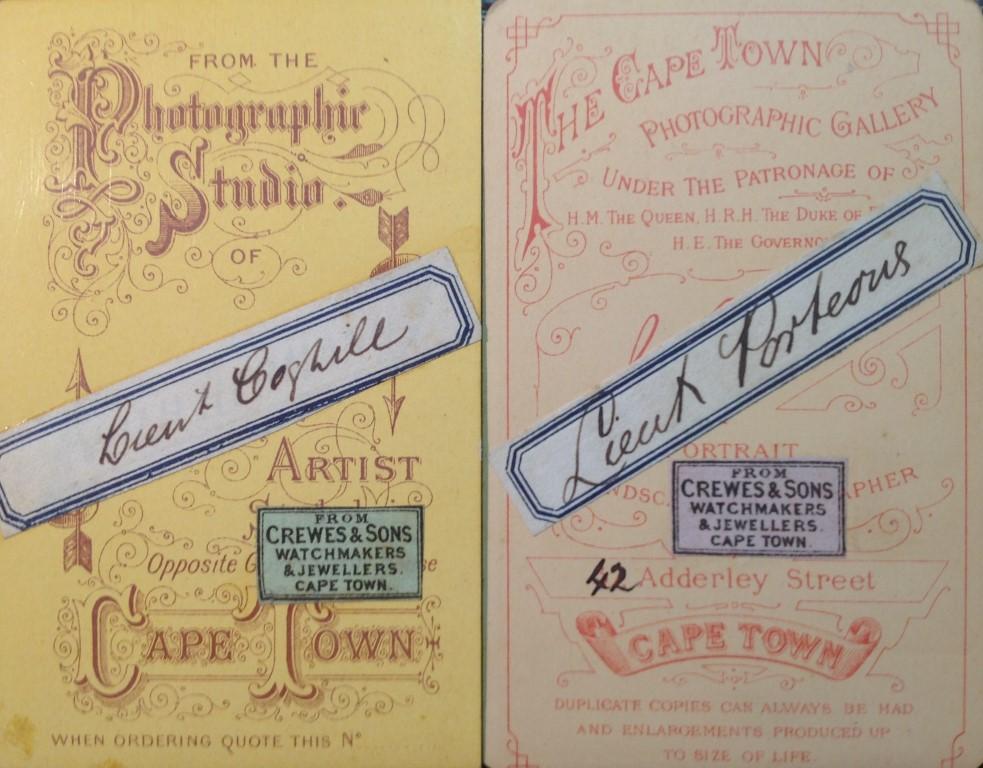 The studio at 42 Adderley street had been in use since around 1855 and seems to have changed hands a number of times. First it was run by Frederick York followed by Arthur Green and later Frederick Mapp. In the 1880’s the studio was also known as The Colonial Photographic Saloon (probably whilst owned by Crewes).

Crewes also published a book titled “Table Mountain” during 1880. This book has been described as an exceptionally rare book on Cape Town.

Post the war, Europeans just needed to have a photograph taken with a “Zulu warrior”. Although “E.Gregson & Son” has been recorded as active photographers in England, it is a possibility that they travelled to South Africa (more than likely Durban) in order to benefit from post war photographic opportunities. 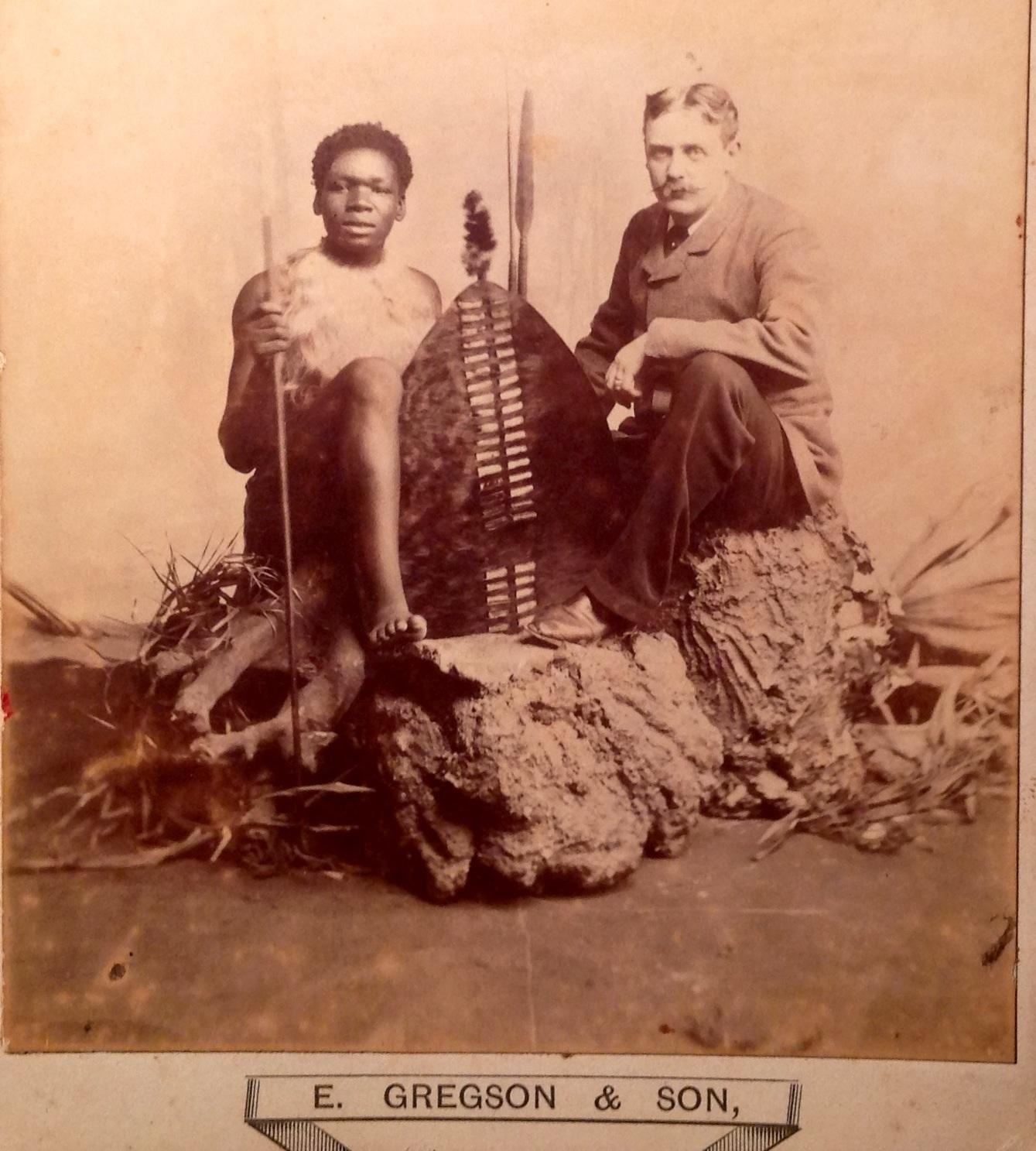 Commercial photo by E. Gregson & Son believed to be based in Durban at the time (Circa 1882)

Ironically the serious collectors of AZW images are based in either England or the USA. The largest private AZW photographic collection is probably held by Ron Sheeley from North Carolina.

The author has a number of additional images of soldiers thought to be from the AZW period. Ongoing research is required to identify the men on these images.

Occasionally some AZW images still surface, mainly from old family photo albums, something that researchers and collectors alike keep a keen eye open for – even some 140 years down the line.