Roy Macnab (1923 - 2004) was a South African poet, journalist, broadcaster, diplomat and author. He used all these considerable talents in researching and compiling this book, published in 1962. This book is perfect for the armchair traveller, we are reminded that we are a country of immigrants and that South Africa like other colonies and the "new world" was a demographic melting pot. Here are all those quirky and unusual South African stories of people and characters and their historical links to Europe over 500 years. It is more than a journey to yesterday; it is a travelogue to another era and makes the sixties seem very remote.

Macnab was an accomplished author. In the same style as this book he also wrote a fine book on South Africa House in London. He also wrote poetry and compiled anthologies of poetry and South African short stories. He was clearly an experienced journalist and keen traveller and his warm personality jumps out from these pages. He was essentially an establishment figure in South Africa of the sixties and in his writing he sought to promote South African interests with a soft-sell at a time of growing isolationism and political strife. He also wrote occasional letters from South Africa for the British Spectator magazine. As a journalist he was commissioned to write a corporate history of Goldfields (Gold was Their Touchstone). His style was that of a gentle raconteur, a bit like Lawrence Green, and the perspective is that of European rooted South Africans, who had immigrated over three hundred years and who were still likely to retain those links to the land of their forefathers and who perhaps looked nostalgically to ancestral homes in Europe.

This book chronicles a host of places in Europe where South Africa and South Africans immigrants originated or where links were forged in times of war and points of crucial negotiation. Those roots and connections are still to be found in monuments, houses, cemeteries, hotels, museums, plaques and those old fingerprints stretch across all of Western Europe. As a respected poet, the style of Macnab's writing was easy on the eye and ear. The end papers show maps of South African landmarks or milestones in Europe and the cover illustrations are of a selection of memories and meaningful places. There are numerous black and white illustrative photographs. 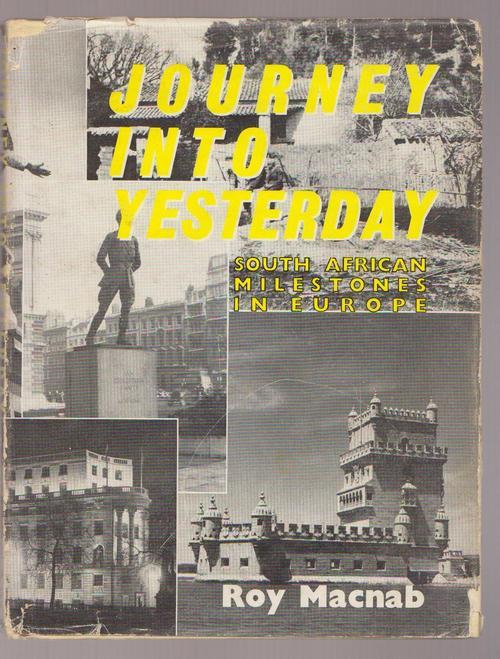 It is a book very much of its period as Macnab never sought nor was interested in black South African history. Perhaps it is too much to have expected him to be. There is nothing here about Saartjie Baartman or about the tragic loss of the SS Mendi or even about paleoanthropological links and say the stories of Raymond Dart taking Mrs Ples to the Wembley Empire exhibition in 1925. All missing. Nothing here about Mahatma Gandhi in London or the sojourns of the ANC delegations to London to protest to the British parliament about that growing wave of segregationist and then apartheid legislation. Geographically Macnab missed Germany, Russia and has nothing to say about that vital wave of Jewish origins from Latvia and Lithuania.

All white South Africans had European antecedents and those ties whether British, French Italian Dutch, Swiss, Belgian or Portuguese still mattered 50 years ago. This is a travel book with a difference because Macnab visited all of the places he wrote about. That is an accomplishment. This is a history book that slips into a travel gazetteer of South African history in Europe. The colonial influence on South Africa of Portuguese, Dutch and British left a permanent imprint on the landscape. In 1960 a South African frigate, the SS Vrystaat was part of a celebratory flotilla on the Tagus, marking the 500th anniversary of the death of Prince Henry the Navigator who started that European exploration down the coast of Africa.

The book is not an historian's book or a scholarly tome because there is no reflection on the 'whys' of history. Was emigration a function of the push factors at times of turmoil in Europe or were the African pull factors more important? There is an index but not a single footnote or source reference. Yet the book is so well written it has to be "true"!

The chapter on Italy relates the experiences of the 6th South African armored division fighting for the liberation of Italy from Germany in 1944 and 1945. The South African war cemetery is at Castiglione where some 460 soldier are buried in very beautiful surroundings.

The chapter on the South Africa links with Britain opens with the commemoration of Rhodes in a plaque in Westminster Abbey. Rhodes is also memorialized in the Rhodes museum in the house of his birth in Bishops Stortford, at Rhodes House in Oxford (benefitting generations of Rhodes scholars) and in the now controversial statue erected by an admirer at Oriel college Oxford. Macnab writes with warm regard too for Rhodes' right hand man, Dr Leander Starr Jameson and the Randlords of wealth and fame who returned to England to live out lives of luxury, such as Alfred Beit and Julius Wernher, who purchased the Lutton Hoo Estate.

All round this is an easy to read book filled with facts and anecdotes and the perfect gift for the compilers of questions for the Classic FM breakfast quiz. It speaks for South Africa of the fifties and sixties. It is a book that has passed into the ranks of collectable Africana but because it is so dated it has become an underrated and unappreciated book by a talented and patriotic South African author. It opens a different window on South African white people and their European connections. Read the book to learn about the links and places of significance in Europe of so many South African men and women.

2016 Price Guide: Out of Print. An inexpensive title and likely to be found online for less than R150.