Sally Swartz is a clinical psychologist and a psychotherapist. "Homeless Wanderers" is about contrasting attitudes and practices in the care of the mentally ill in the Cape Colony in the years between 1890 and 1910. The pre Union, late colonial period with a narrow focus on the Cape Colony is an interesting choice for this study, as the time span preceded National Union and the development of South African medical structures. The study reflects British empire commonalities as to how late Victorian and Edwardian societies (taking their cue from Britain) thought the insane could and should be treated, cared for, managed or cured or endured.

Swartz explores the tension between the incarceration of the insane in asylums, hospitals, jails and the free movement and release of people judged insane (or not so mad after all) for care by families and communities. Seemingly an abstruse and remote historical subject, the challenge of how best to care for the mentally ill is highly topical today when modern cost cutting, liberal states collude with tax payer parsimoniousness to release uncured and incurably mentally ill people into society to either fend for themselves or shift into private or family care. Here perhaps an historical study using the case study approach tells us much about personal experiences of these pitiable mentally impaired people who became nomadic, restless wanderers journeying about the Cape Colony and beyond. There is much to reflect on and relate to current tensions and differing opinions. The key questions revolve around the causes of insanity, the role of the family in care, the routes to recovery and cure, violence and criminality, the jail vs the asylum and the level of responsibility of the state in providing institutional accommodation and treatment. 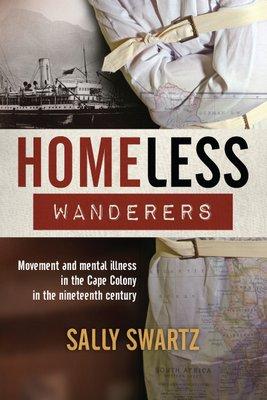 This thoroughly researched book is based on a wide variety of documentary sources. The experiences and life histories become the threads in the textured social fabric that then illuminates with insight the broader themes. This is a fascinating historical and social study and it is again a book that effortlessly crosses disciplinary boundaries. The archival primary sources in South Africa and the UK are impressive. The text has been enhanced by the inclusion of contemporary photographs and extracts from documents. It is fascinating to read a table showing the probable causes of insanity of patients admitted in the year 1906, running the gamut from moral to physical causes. "Intemperance in drink" was by far the largest cause of insanity in men and was considered to be a physical problem.

The one major omission in this study is the lack of a commentary and analysis of the economics of treating and managing mental illness. An economic agenda is only mentioned once in the text, and yet financial issues and ways to cuts costs and the logic behind transferring costs from the public domain to the private sector is "the elephant in the room”. It was then and it still is now.

In summary, this is a book about men and women suffering from serious often chronic mental illness a century ago. It is also the story of the doctors, families, police, magistrates and the law in addressing issues of mental illness. There is an immediacy in the writing that gives the book a topical and current feel. Strongly recommended.