This year makes the centenary of the South African's heroic assault on and then defence of Delville Wood in France on the Western Front in July 1916, a 6 day epic of warfare. It was a part of the long battle of the Somme. The losses were horrendous with only 700 odd soldiers of the South African brigade emerging From the wood on the 6th day and over 2500 casualties.

It is a story that has been well told and etched on South African national consciousness with memorials to the men of Delville wood in Cape Town, Pretoria and at Delville Wood itself. The relevance of Delville Wood is that this year a new memorial is being added and unveiled on 12 July at the centenary events to incorporate not only the sacrifice of white young fighting men but now to address and adjust history to include the names of men of the South African Native Labour Contingent (SANLC) who died in France, between early 1917 and early 1918. These were black men from kraals, hills and valleys of rural South Africa who were recruited to become labourers in the white man's war. Approximately 74 000 were recruited for service in South West Africa, East Africa and France.

This small book was published by Ravan press in 1987 when the hallmark of Ravan was that it published alternative new views of South African society and history. Ravan was an independent publisher prepared to take risks and publish non-fiction books considered too risky by the normal commercial publishers. This book is a good example. It is a small paperback, only 200 pages, there are no illustrations and after 30 years the acid paper has yellowed severely. It was inexpensively printed and bound. Now among the ranks of highly collectable first editions, the price on Amazon if you can find a copy tops $500. It is one book that should definitely be republished in this centenary year of Delville Wood, despite a tenuous link between Delville Wood and the Native Labour Corp.

Fighting their own War - book cover.jpg 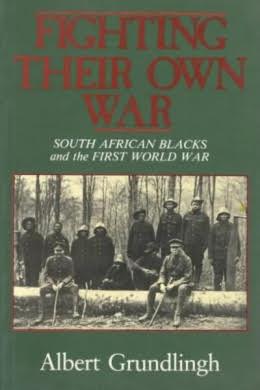 Dr Grundlingh refined a D Lit thesis to turn out a very readable account of the experience of South African black men in World War 1. This book is a work of social history rather than military history and focuses on the African responses to the Great War and their experiences that followed when it was decided to form a labour contingent.

An introduction slots this study into the historiography of the theme of "war and society". The first chapter deals with the Black responses to the outbreak of war. The second chapter is on the official and public discourse on where and how black men could contribute to the war effort. The decision to recruit black men for non-combatant labouring duties was as much about the fragile and difficult issues of the day in local politics as it was about imperial needs for more men to feed into the machine that led to attrition and demanded ever more manpower. The work explains the process of recruitment and where and how men were found to join this reserve army of labourers, and explores the controversial question of coercion and incentives used in persuading men to answer the call of the King and be ready to go overseas. The Chamber of Mines became a key logistical conduit for recruitment and the model of mine labour organization, management and hierarchy and the compound systems of accommodation were applied in a new context.

The core and most fascinating chapter of the book is about the nature of military service and what happened to the men who went to East Africa, German South West Africa and then in 1917 to France. One of the three troopships conveying over 880 men to France was accidentally sunk off the Isle of Wight when two British ships collided. The disastrous loss of the troopship the SS Mendi and the heroic behaviour of the 615 men who went down with the ship has passed into epic and myth making. It is one of those dramatic events that every school child now knows about and there are memorials at Southampton, Avalon Cemetery, UCT, Bloemfontein and Atteridgeville.

21000 men arrived in France in early 1917 (well after the Battle of Delville Wood) and they joined a multi-national labour corp that by December 1917 stood at over 91 000. They worked as unskilled labourers as stevedores on the shops at the ports such as Le Havre, Rouen, and Calais. They off loaded ships and loaded railway trucks, they repaired roads and railway lines. Grundlingh carefully gathers his evidence of the experiences of a cold climate, harsh working conditions, a closed compound housing system, hierarchy in controls with white supervisory staff as well as social interaction with local people. The uniforms of the labourers (brown corduroy) were much disliked and not up to the standard of the khaki uniforms of white soldiers. Here lay the roots of historical hurt and resentment that has echoed through the decades. In January 1918 it was decided to disband the SANLC and return the men to South Africa, with political issues uppermost in this decision. The final part of the book deals with the impact of military service, the question of a raised black political consciousness and how war leads to social change.

Ultimately Grundlingh concedes that the War had a very limited impact on political conscious raising among blacks; there was no strong veterans association. His conclusions point to the other issues that loomed large for the ANC and labour unions, issues of land access and ownership, work in a capitalist environment of the cities and finally discrimination.

The work is superbly researched and the approach is a model of sound academic analysis but without being dry and unreadable. There are meticulous footnotes, a complete listing of archival research sources and secondary history books that shows Grundlingh's understanding of the broader context.

I would love to see a new edition of this book brought up to date with some reflections of how this particular study brought to light a little known aspect of the First World War and made its mark by changing perceptions and our understanding of the participation of Africans in World War I.

It has taken another three decades for the victors to rewrite history in monuments and memorials, to destroy old colonial monuments and erect new memorials. But then the Delville Wood memorial and museum are constructs that reveal much about the making and remaking of South African nationalism and identity. One wishes the past could be changed through the belated award of medals, battle honours, moving the mortal remains of the first black man to die in France to Delville wood, compiling Honour rolls in new and different ways or in etching names down a new memorial pathway. Neither the past nor the present is that simple.

This is yet another book that makes one weep for the injustices of the past but one that should be read so as not doom ourselves to making the same mistakes of the past.