A remarkable story of how a man feels about his home 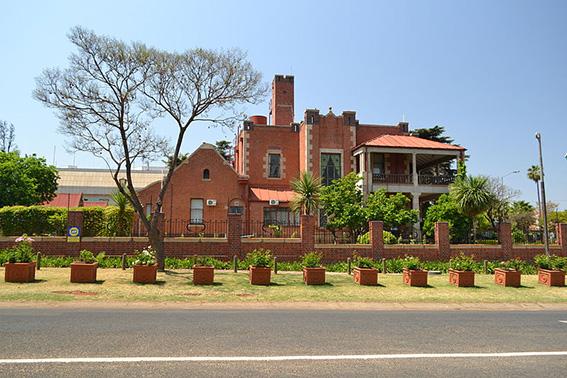 The American Government was assembling a site in Arcadia, Pretoria. They wanted the entire suburban block so they could build the largest embassy in Africa. One property stood between them and the full realisation of their plan, an old home called Arkleton belonging to Dr van Bergen. The Americans appointed an independent valuer to determine the market value of the property. Using all the correct procedures to determine the most probable market value, a valuation of R2 million was established and an attractive cash offer with no suspensive conditions was presented to Dr van Bergen. His first question was: “What do you want to do with my home?” “We want to demolish it,” was the reply. “Never!” exclaimed the doctor, “not for as long as I live.”

When I called on him a few weeks later to enquire if he would consider selling his home, he asked, “Are you here on behalf of the Americans?” I assured him I was not. He told me he was considering selling his home because he had sold his practice and retired. To discover why, then, he was so against selling to the Americans, I probed cautiously. What followed was a remarkable story of how a man feels about his home.

“My wife and I were building our dream home when an estate agent friend of ours told us a marvellous old home had just come onto the market,“ he said. “We explained we had started to build a home and were no longer in the market. He insisted, saying we did not have to buy it, but he would like to share it with us. To oblige him, we came to view the place and I can almost say we never left it again.

“What was it that appealed to you?” I asked. In answer, he gave me a conducted tour of his home of 40 years. “This home was designed by an architect called Rees-Poole, who worked in the office of Sir Herbert Baker, designer of the Union Buildings. It was built in 1912 by John Munro, a talented master builder, who had recently completed the Palace of Justice on Church Square. He named it Arkleton after his hometown in Scotland. Munro was married to a Frenchwoman who was confined to a wheelchair, so he installed a rosewood-panelled elevator, one of the first in a single-family residential property in South Africa. This gave her access to the roof, which commands magnificent views of Pretoria. The roof had a copper lining under the waterproofing, and both the parapet walls around the roof and the handrails along the spacious wraparound balconies were much lower than normal to give her an uninterrupted view.” 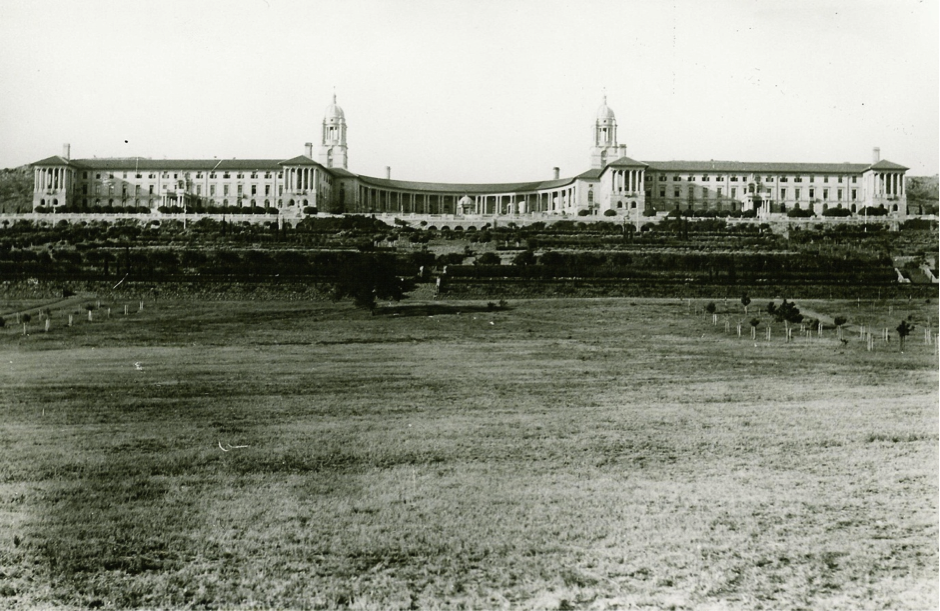 The Union Buildings circa 1920 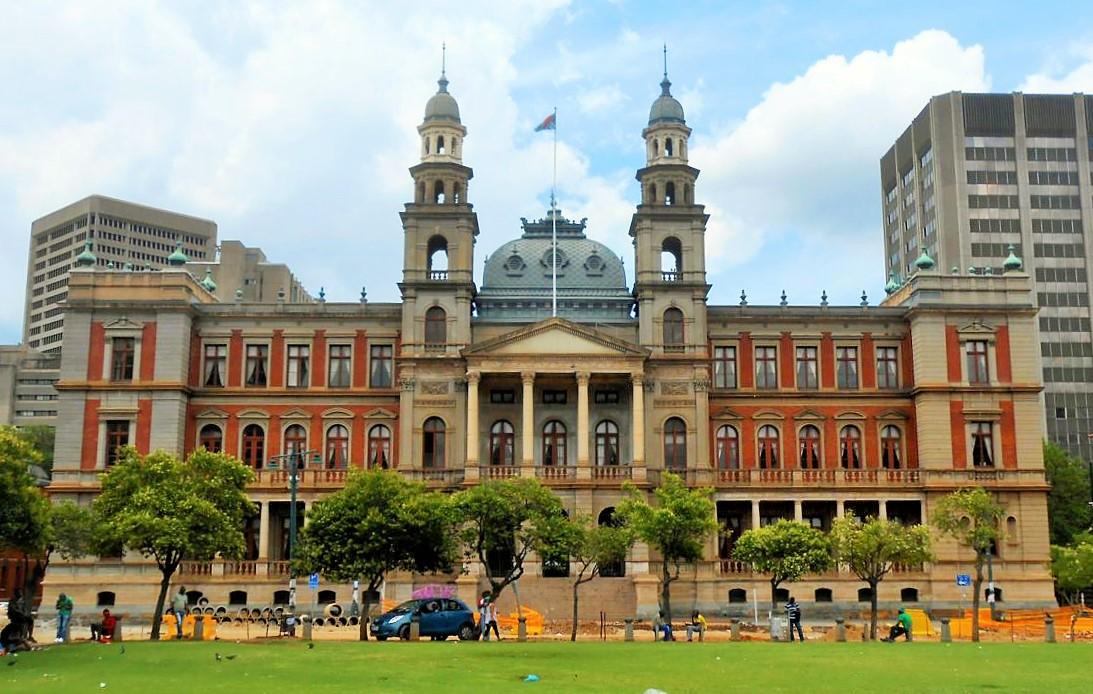 As we stood on the balcony, he continued, “Pretoria is known as the Jacaranda City. The jacaranda trees that beautify our streets were a gift from our sister city Rio de Janeiro in Brazil. At the time, the town council ordered the removal of all the oak trees lining Pretoria’s streets and replaced them with jacarandas. Mrs Munro, frail as she was, sat in her wheelchair on this balcony with a shotgun on her lap threatening all who approached the oak outside her home that she would shoot to kill if they made the slightest attempt to remove it. The tree was saved and to this day is the only oak tree standing on the sidewalk of Schoeman Street in Arcadia. These little things give a home character and show the love this home has known since 1912,” he explained. 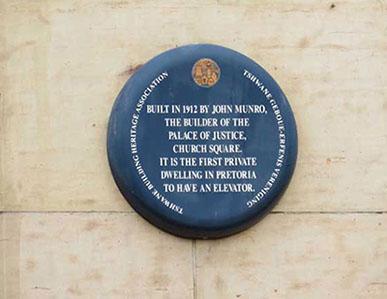 The blue plaque on the house (The Arcadian)

Then he took me into the entrance hall, fitted with Burmese teak panelling, superb moulded ceilings and imported tiles, where a large wooden staircase led up to a tall stained-glass window above the landing. “Notice the magnificent carvings on this wooden balustrade. One is a Scottish thistle, the other the French fleur de lis, which perpetuate the love affair between this robust Scotsman and his French wife for as long as this home stands. As she was so frail, he even built a double wooden glazed French door at the main entrance so no cold breeze would reach her as anyone entered. Between those two glass doors there is also enough space for her to park her wheelchair while closing one door and opening the next.”

Van Bergen then drew attention to the brickwork. “The vertical joints or perpendiculars are all in perfect alignment, absolutely at right angles to the horizontal joints and plumb from the roof down to the plinth. This house is still cited as one of the finest examples of the ‘Kirkness’ style of patterned brickwork. Every door and window opening is square and level, even the corners are perfectly square. They do not build like this anymore. Pretoria University’s Faculty for Architecture brings final year students here every year to see how brickwork should be done.” 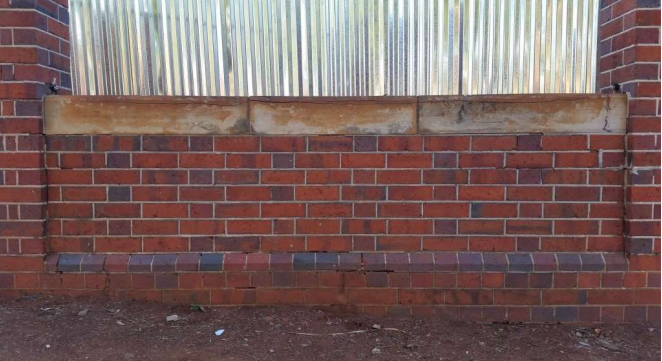 An example of the brickwork in the boundary wall. Sadly, parts of this wall were demolished a few years ago.

“In the old days,” he continued, “artisans had to serve a five-year apprenticeship to qualify as bricklayers and spent an entire year just making windowsills, and another learning to make corners. Today, they mass-produce bricklayers within three months. Apart from their lack of artistic skills, their production has fallen from laying 1 000 bricks a day to 500. If this old home were built today, it would cost considerably more and it would be of a much poorer quality.”

“I have enjoyed the benefit of this beautiful home while my five children were growing up and my wife and I growing old. My children took their first uncertain steps here, grew into adulthood from this home. More recently, my grandchildren have visited us here too. Over the past 40 years I found comfort here after a hard day’s work at the practice or the hospital. It was here that my body was nourished and rested. I have wonderful memories of this home. Whenever I smell homemade bread served with farm butter and apricot jam I think of home. When we took our annual vacations to all the romantic destinations of the world, we always looked forward to coming home; it has been our little bit of heaven.”

The Van Bergens had been only the third owners of this lovely home since 1912. John Munro had lost his wife a few years after completing it, and he returned to Scotland. For almost 80 years afterwards, Arkleton had served the needs of just two families. A gracious home indeed, occupied by a very thankful owner. No wonder the doctor would have nothing to do with the Americans who wanted to demolish it.

After this interview, I was given a sole mandate, largely because I could identify with his hurt at the thought of all those beautiful memories being demolished. The home was sold to the Indian government a short while later, rewarding him with substantially more than the R2 million he had been offered by the Americans. 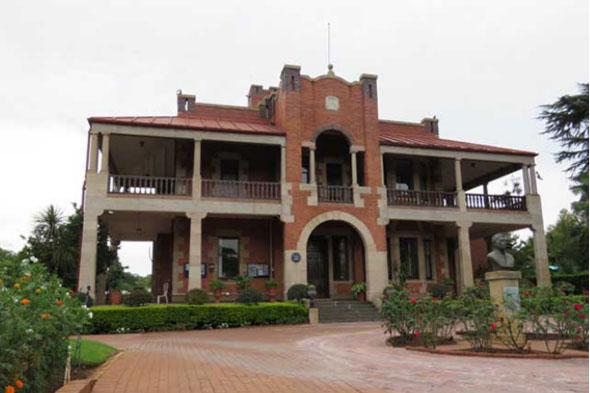 Arkleton, a grand home (The Arcadian)

During my research, I found that Sir Herbert Baker had left South Africa for India, where he designed and erected many buildings similar to the Union Buildings. The Indians loved and respected his work and were able to convince Dr van Bergen that they would care for this lovely home very tenderly. I researched every detail of this property, leaving nothing to chance, and sharing with Dr Van Bergen all the information I assembled. Naturally, I also shared most of this information with the Indian delegation before they purchased the property.

What was it that convinced the Indian Government to buy the property? Was it the position it commanded? The fact that they loved Sir Herbert Baker’s work? Perhaps the love story depicted in the wooden balustrade? Was it that the accommodation was suitable for their needs? Perhaps the fact it was built by a master builder? Or even the story of the lady protecting the old oak tree?

In my view, it was a combination of all these elements, each one serving to reinforce the others. But the interesting thing is that when Ambassador Mangelmurti gave his first press interview as Ambassador to a new country, he told the Pretoria News: “I particularly loved the story about the lady sitting on the balcony in her wheelchair with a shotgun on her lap protecting that beautiful old oak tree.” (Sadly the oak tree is no longer there)

About the author: Norman Nel was a well-known Pretoria Estate Agent.

This article was originally published in the December issue of the Arcadian. Click here to view. Thank you to ARRA for giving us permission to publish.