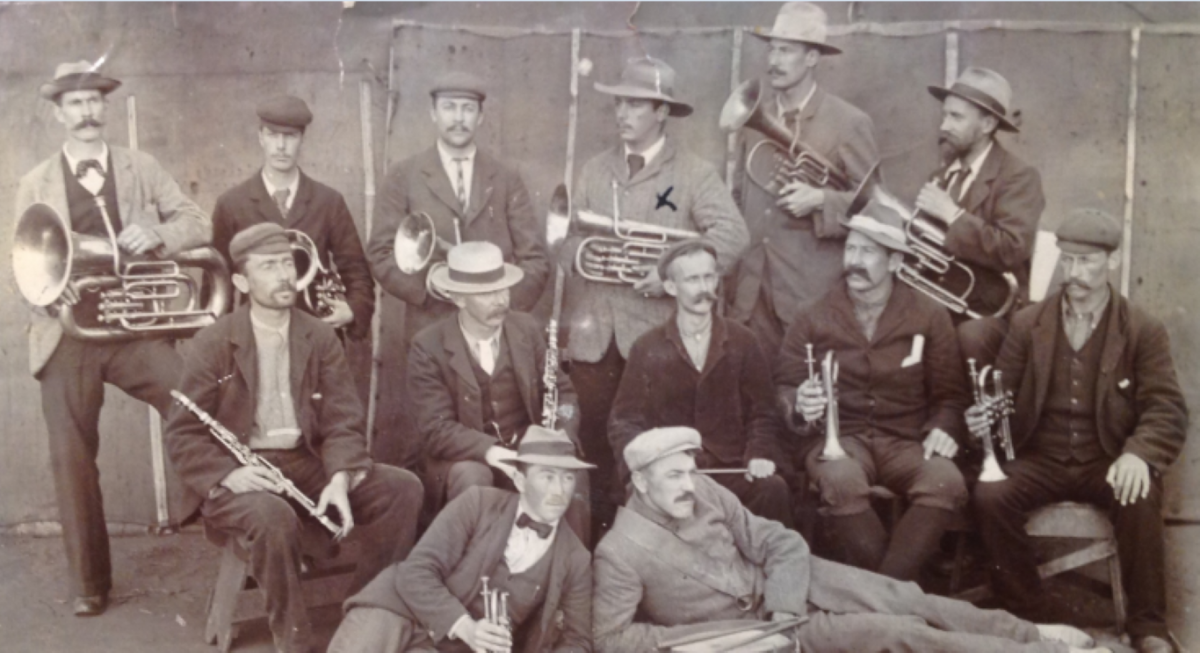 Huge was the surprise when the author received multiple enquiries on a Prisoner of War (PoW) camp photograph that was included in a recent article on photography during the Anglo-Boer war (click here to view).

This Diyatalawa PoW camp photograph has the names of all 54 men captured on the back thereof (See Photo 5 below).

This unexpected interest confirms that genealogical research and natural curiosity around family links and history, even some 120 years after the event, are alive and well.

The intention of this article is therefore twofold, namely to list the names of the sitters identified in these 6 group photographs in order to assist current and future researchers and also to briefly reflect on the photographic activity at these PoW camps.

Around 24 000 boer prisoners were transported to various overseas camps. During this period some 577 men perished either at sea or in the camps – mainly due to natural causes. It has been recorded that the eldest prisoner was 78 at the time whilst the youngest was 7 years old. Camps existed in South Africa, Bermuda, St. Helena, Ceylon, India and Portugal.

Although much has been published by historians about life and activities in these various PoW camps, little is known about professional photographers active in these camps. It is thought that the majority of these would have had no direct link to South Africa and that they were based in the countries or on the islands where these camps existed, or that they travelled there with the specific intention of photographing the captured men.

We have just come to accept the existence of PoW photographs, in the majority of instances taken many 1000 kilometres away from home. The social value of these images is clear – then and today. Men needed to communicate to their loved ones left behind – many of them in concentration camps themselves.

Many questions arise around photographic activity in these camps, such as: How did the photographs come about? Who were the photographers? What did they observe or experience whilst capturing the images? How many PoWs would have had cameras themselves? Much research is still required to answer these plus multiple other questions.

The following two photographers active in two South African PoW camps have been recorded to date, namely: John J Kruger (Bellevue camp) and Ambrose Jarman (Green point). Other South African based photographers would more than likely also have negotiated access to these local camps in order to practise their trade.

The two photographers active at one overseas camp identified to date are: B. Grant who took various photographs of Cronje (with his men and his wife) and A.L. Innes (both based at St. Helena). These two individuals more than likely were already based on the island as photographers in that they have not been recorded in the British register of Victorian photographers.

Access to PoW camps was more than likely not freely available to the entrepreneurial photographers of those years. Such access would more than likely have required special permits and sign-off from higher authorities.

It is not known whether any professional South African based photographer became a PoW, yet it has been recorded that F.J. Fick, Pieter Pijl (member of Dutch corps), W.J Graaf and one Prak set up a photographic business in the Broadbottom camp (Schoeman, 2011). It is assumed that they would then have taken photographs as well. This raises another question – where did they source all their equipment/material from? None of the parties have been identified as active South African based photographers prior to their transfer to the island or on their return from the island. This potentially suggests that they were amateur photographers who saw an opportunity to provide a service to their fellow countrymen.

Six Photographs – One Hundred and Three Prisoners of War

Sadly, none of the photographers in the six photographs below have been identified. 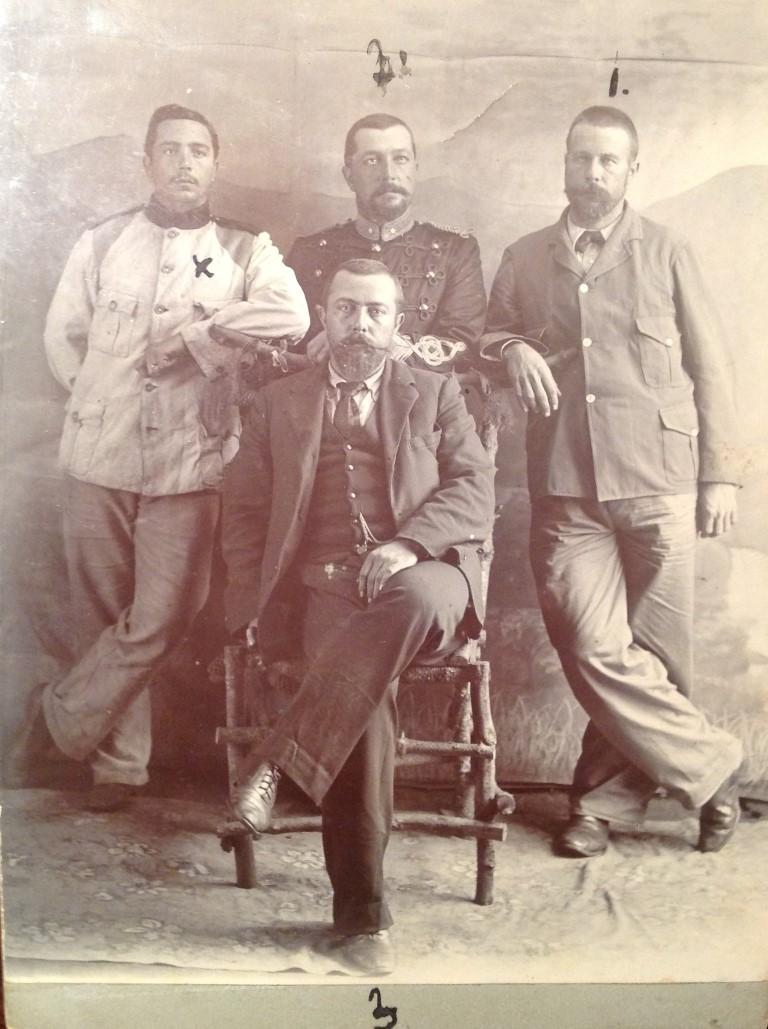 Photograph taken on 30 March 1902. Of interest is the jackets worn by the two men at the back. Could the jacket of the man in the middle back be that of the presidential guard?

Marthinus Johannes Wolmarans was the commandant of the Potchefstroom commando and was part of the siege of Mafeking where he was wounded. He and his burgers also formed part of General P.A. Cronje’s commando’s that were captured as prisoners at Paardenberg and sent to St. Helena. The eight sons of Commandant Wolmarans all took part in the war and one was later a commandant under General Liebenberg. 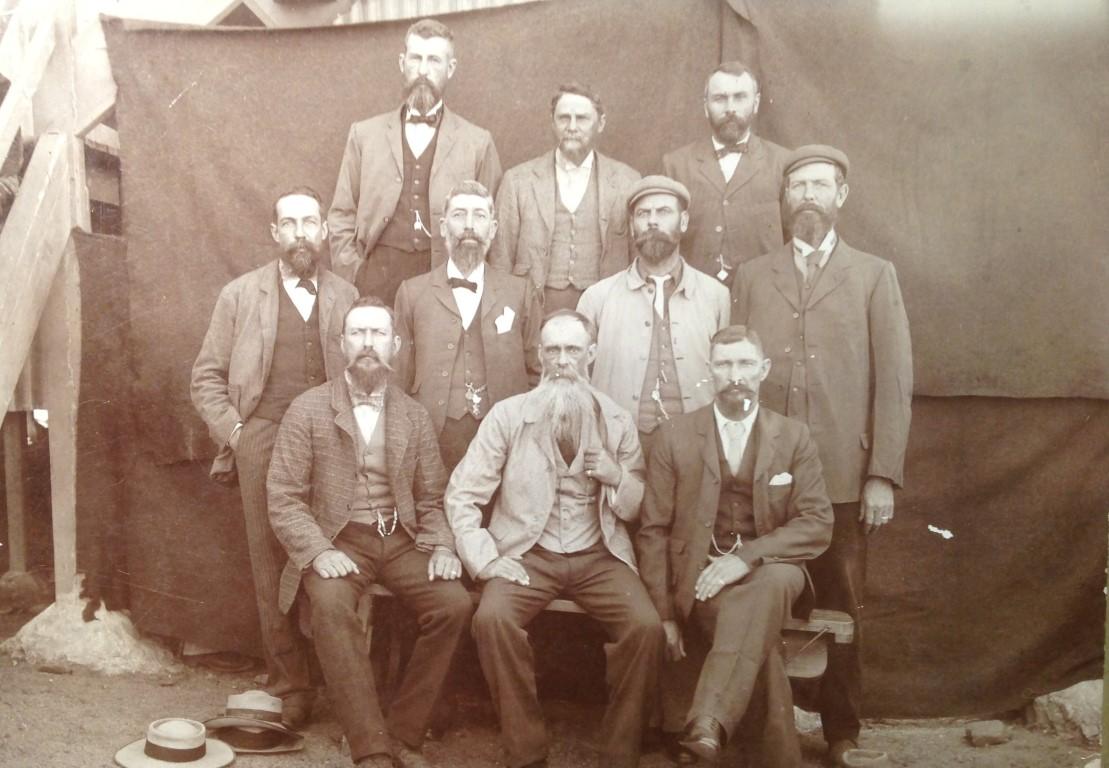 Photograph taken 21 March 1902. The back of the photograph has each man’s town of origin recorded as well as location where they were captured by the British troops. Note - at least 5 of the men have bow ties.

Names on back (from top left to right) 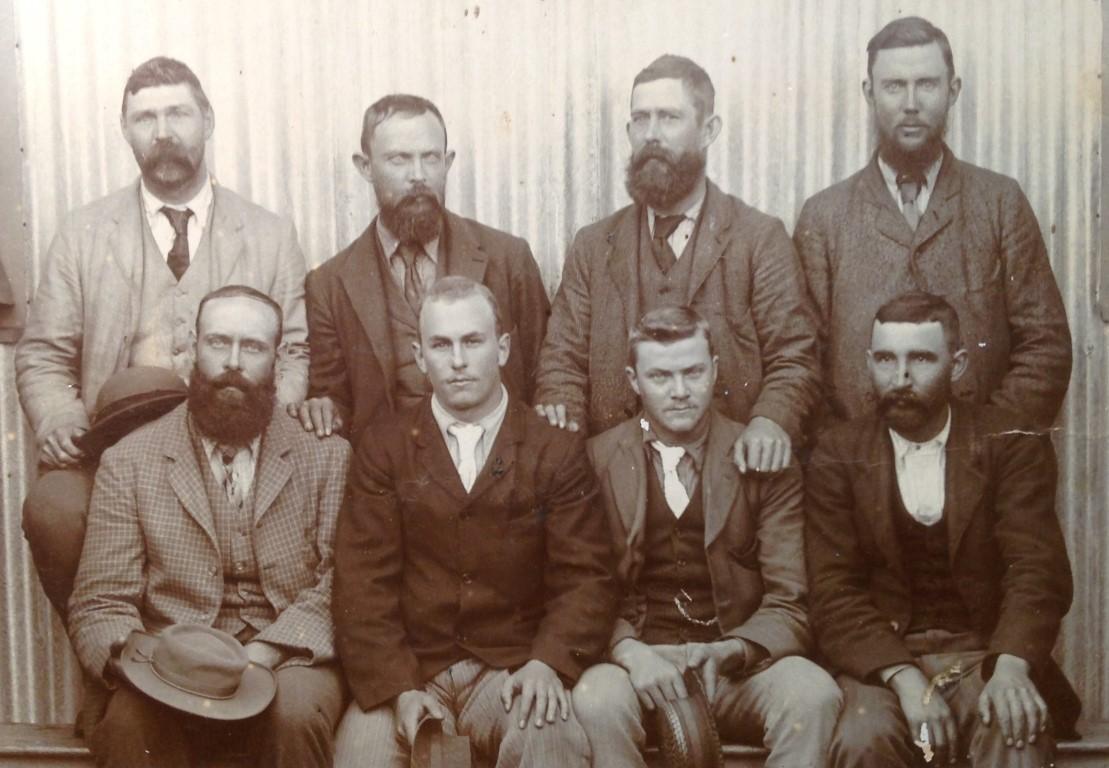 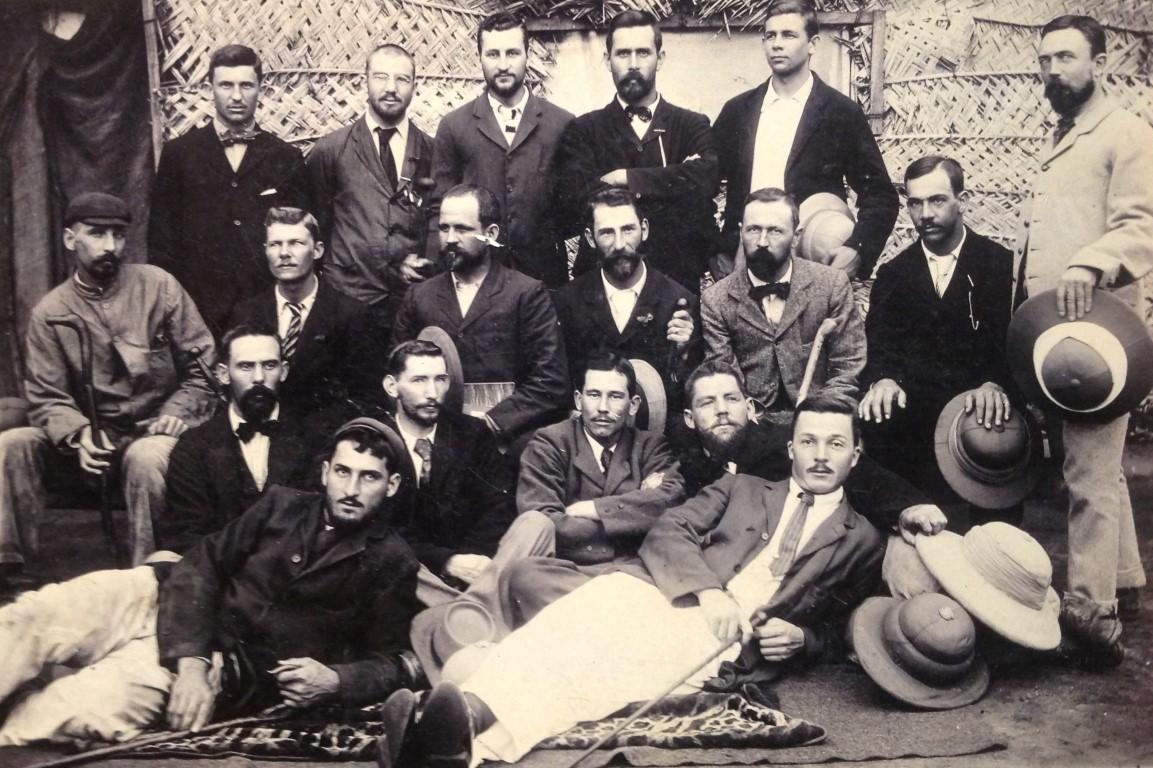 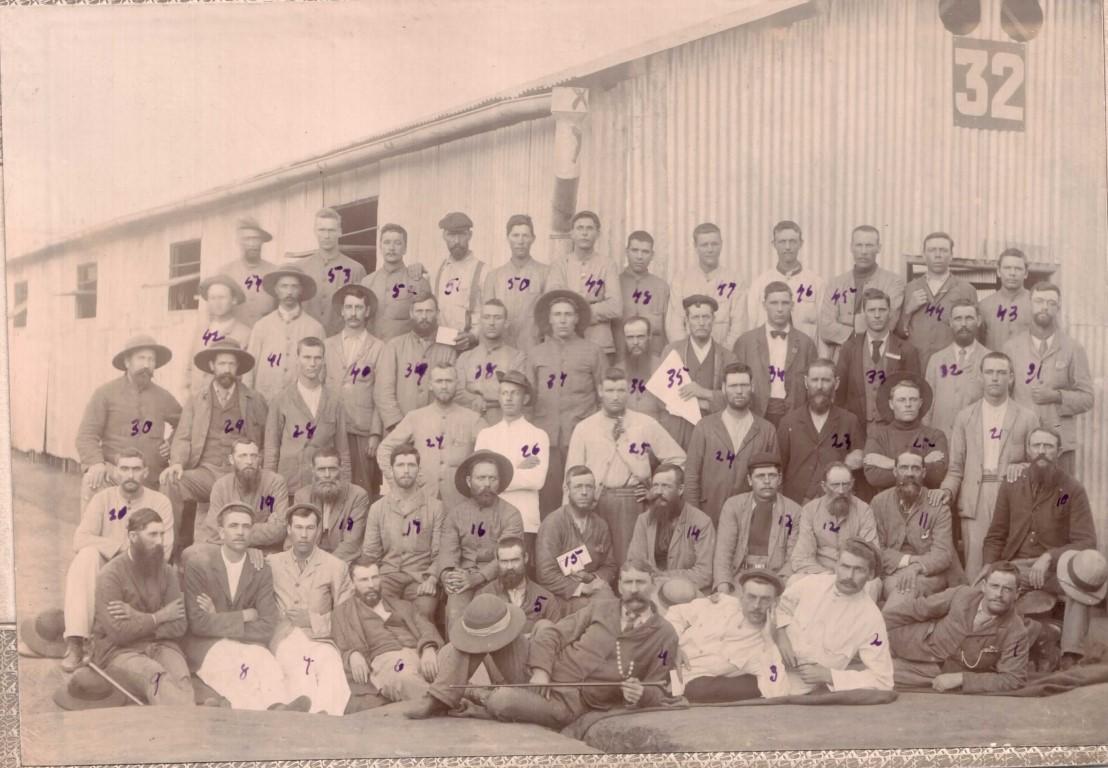 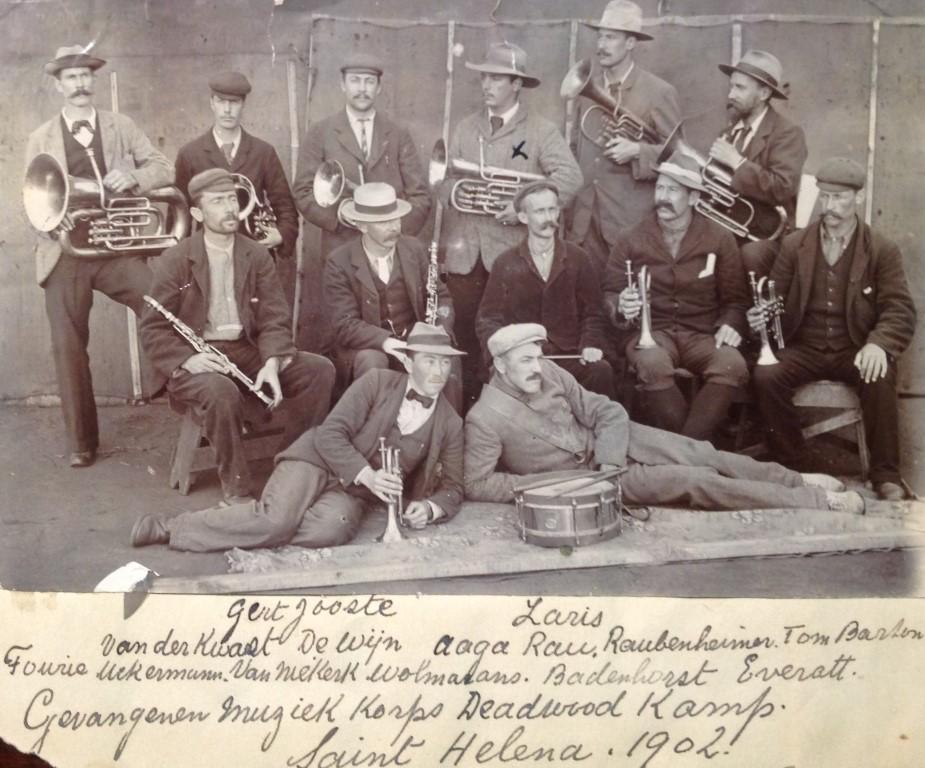 Back row from left: Fourie; Ueckermann; Van Niekerk (first name probably Hugo); Wolmarans (This seems to be the same person as in Photo 1 above – on left); Badenhorst; Everatt (Everitt?)

All names with a question mark next to them (?) indicate that that the author was not sure of the hand writing – surnames may therefore have been incorrectly captured.

Readers who have any additional information on photographers who were active in the PoW camps from 1900 onwards are invited to inform the author accordingly as this is clearly a field that requires further research.